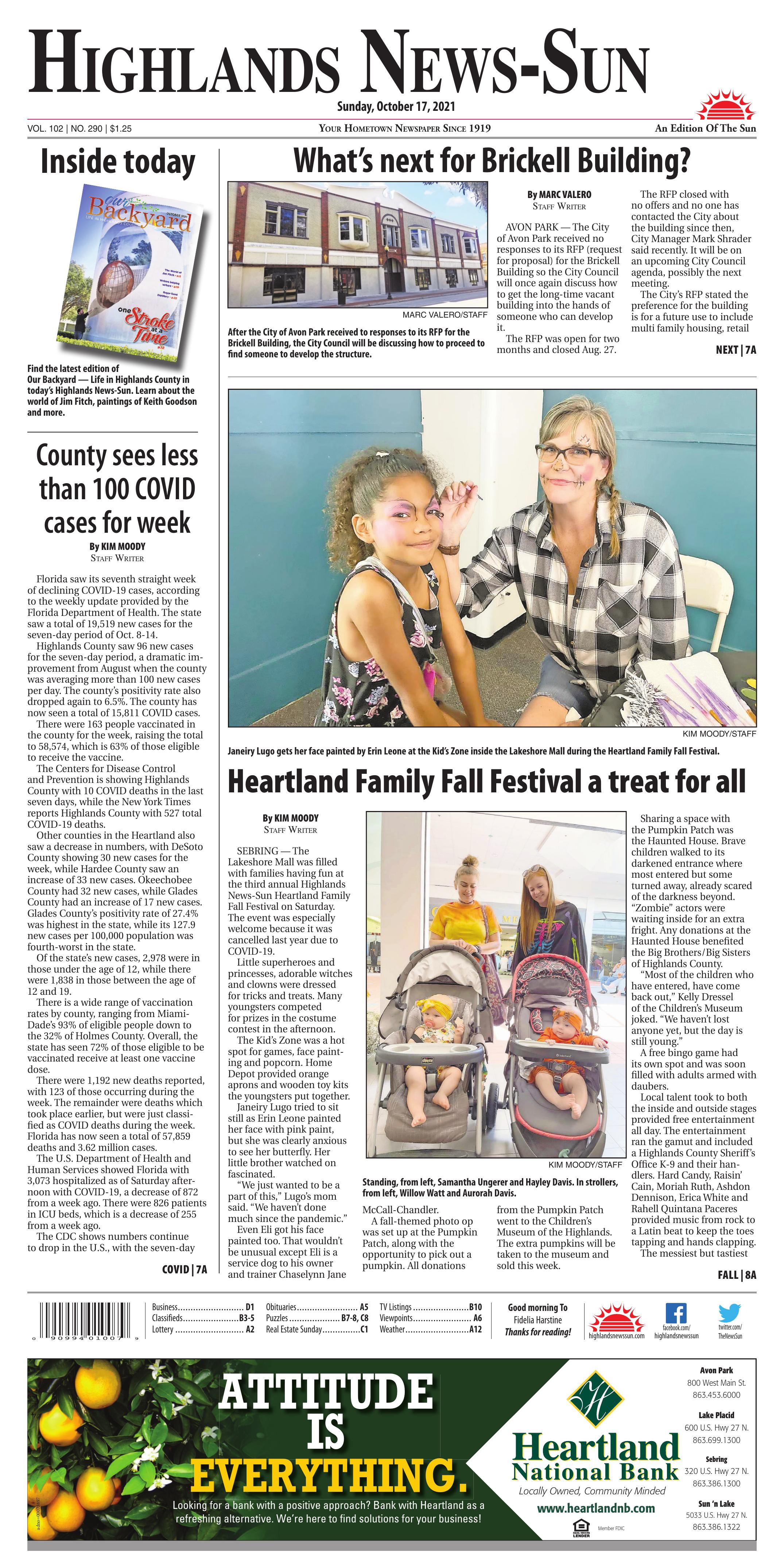 After the City of Avon Park received to responses to its RFP for the Brickell Building, the City Council will be discussing how to proceed to find someone to develop the structure.

AVON PARK — The City of Avon Park received no responses to its RFP (request for proposal) for the Brickell Building so the City Council will once again discuss how to get the long-time vacant building into the hands of someone who can develop it.

The RFP was open for two months and closed Aug. 27.

The RFP closed with no offers and no one has contacted the City about the building since then, City Manager Mark Shrader said recently. It will be on an upcoming City Council agenda, possibly the next meeting.

The City’s RFP stated the preference for the building is for a future use to include multi‐family housing, retail shops, lunch/dinner eateries, bakery, coffee shop, sports bar, brewery or tap room, etc., with the overall goal of creating a destination for the community and surrounding areas to live, work, shop, play, and to increase foot traffic in the downtown area.

Mayor Garrett Anderson said his idea would be to re-advertise.

“I have been talking to a couple of real-estate agents and brokers about a better way to market it,” he said. “I am not particularly in favor of rehabbing the building ourselves. I would much rather it be in private hands.”

“Anything we can do to get it into private hands is definitely going to be what I am going to vote for.”

Deputy Mayor Jim Barnard said he believes the only thing the City can do now is market the building through a real-estate agent.

There needs to be somebody who can know the property and find people, maybe even from out of the area, and get the right price that would give somebody a good opportunity to develop it and bring income and taxes to the City of Avon Park, he said.

The City had one person who was interested, but they were wanting more rental units upstairs to pay for the mortgage and cost to develop the downstairs, Barnard said. That was the determent that they had.

The City will have three new council members next month so they will have an opportunity to speak on the subject, Barnard said.

Councilwoman Maria Sutherlands said she would re-advertise a new RFP in a larger circulation market plus construction journals (more geographic reach within Florida and out of state than just central Florida) for two months.

“Our previous RFP may not have had sufficient incentives that were near to the investment needed to rehab the building,” she said.

“We know it will take at least $1 million-plus to clean it up, fix the mold problem, finish off the upstairs to a bare standard and re-do the electric, plumbing and fire suppression and let’s not forget the elevator.”

Sutherland said she would be OK giving the building with added incentives of $300K as start up cash from the CRA towards the rehab plus an additional loan of $500,000 from the CRA at a low interest rate to be forgiven at a pro-rated amount at 6-plus years or completely forgiven if rehabbed and occupied by year five.

“If we took on the task ourselves to rehab it, the cost would be more,” she said. “I’m OK with that too — as long as we have the fortitude to just do it.

“I would hate to be a future horizontal occupant of a hearse driving by the Brickell Building and seeing zero iota of improvement.”

SEBRING — The Lakeshore Mall was filled with families having fun at the third annual Highlands News-Sun Heartland Family Fall Festival on Saturday. The event was especially welcome because it was cancelled last year due to COVID-19.

Little superheroes and princesses, adorable witches and clowns were dressed for tricks and treats. Many youngsters competed for prizes in the costume contest in the afternoon.

The Kid’s Zone was a hot spot for games, face painting and popcorn. Home Depot provided orange aprons and wooden toy kits the youngsters put together.

Janeiry Lugo tried to sit still as Erin Leone painted her face with pink paint, but she was clearly anxious to see her butterfly. Her little brother watched on fascinated.

“We just wanted to be a part of this,” Lugo’s mom said. “We haven’t done much since the pandemic.”

Even Eli got his face painted too. That wouldn’t be unusual except Eli is a service dog to his owner and trainer Chaselynn Jane McCall-Chandler.

A fall-themed photo op was set up at the Pumpkin Patch, along with the opportunity to pick out a pumpkin. All donations from the Pumpkin Patch went to the Children’s Museum of the Highlands. The extra pumpkins will be taken to the museum and sold this week.

Sharing a space with the Pumpkin Patch was the Haunted House. Brave children walked to its darkened entrance where most entered but some turned away, already scared of the darkness beyond. “Zombie” actors were waiting inside for an extra fright. Any donations at the Haunted House benefited the Big Brothers/Big Sisters of Highlands County.

“Most of the children who have entered, have come back out,” Kelly Dressel of the Children’s Museum joked. “We haven’t lost anyone yet, but the day is still young.”

A free bingo game had its own spot and was soon filled with adults armed with daubers.

Local talent took to both the inside and outside stages provided free entertainment all day. The entertainment ran the gamut and included a Highlands County Sheriff’s Office K-9 and their handlers. Hard Candy, Raisin’ Cain, Moriah Ruth, Ashdon Dennison, Erica White and Rahell Quintana Paceres provided music from rock to a Latin beat to keep the toes tapping and hands clapping.

The messiest but tastiest event was the pie eating contest. Separated into age groups, contestants dove into pies headfirst without the use of their hands. Elsa Mansou won the under 9 age group, Cadence Wicker won the over 9 age group and Scott DaSilva won the adult division, beating out his daughter Tayla.

An old-fashioned hay ride took guests around the mall’s parking lot and brought back nostalgic memories for some while creating new ones for others. 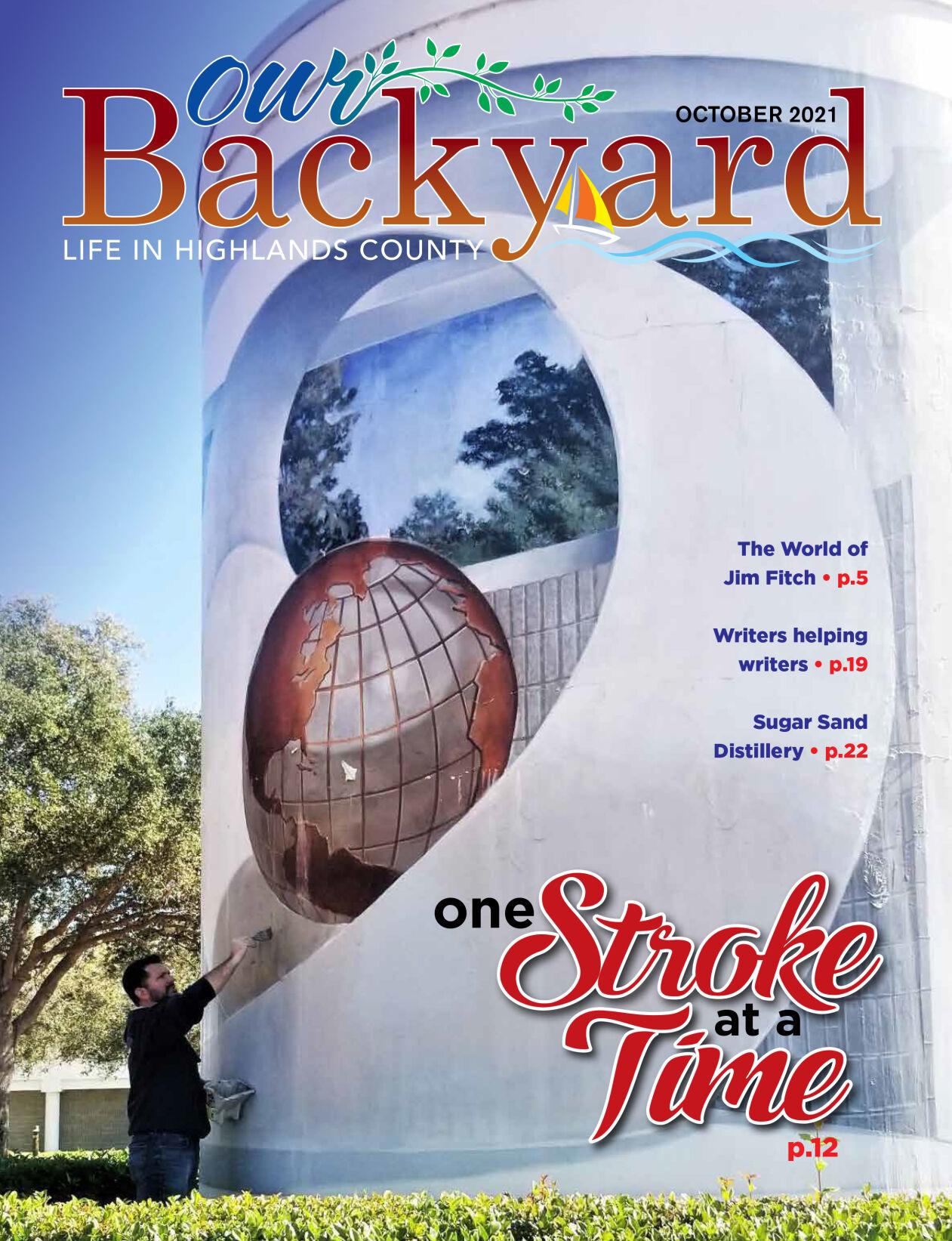 Find the latest edition of Our Backyard — Life in Highlands County in today’s Highlands News-Sun. Learn about the world of Jim Fitch, paintings of Keith Goodson and more.

Florida saw its seventh straight week of declining COVID-19 cases, according to the weekly update provided by the Florida Department of Health. The state saw a total of 19,519 new cases for the seven-day period of Oct. 8-14.

Highlands County saw 96 new cases for the seven-day period, a dramatic improvement from August when the county was averaging more than 100 new cases per day. The county’s positivity rate also dropped again to 6.5%. The county has now seen a total of 15,811 COVID cases.

There were 163 people vaccinated in the county for the week, raising the total to 58,574, which is 63% of those eligible to receive the vaccine.

There is a wide range of vaccination rates by county, ranging from Miami-Dade’s 93% of eligible people down to the 32% of Holmes County. Overall, the state has seen 72% of those eligible to be vaccinated receive at least one vaccine dose.

There were 1,192 new deaths reported, with 123 of those occurring during the week. The remainder were deaths which took place earlier, but were just classified as COVID deaths during the week. Florida has now seen a total of 57,859 deaths and 3.62 million cases.

The country’s death rate is also trending downward, but is moving a little slower than the case count. The seven-day average for deaths is 1,248, which is comparable to numbers seen in late August.

According to Bloomberg, the U.S. has now administered 405 million doses and is averaging 824,563 doses given per day. These also include booster shots for those who fit the criteria.

Globally, there have been 6.65 billion doses given across 184 countries. The seven-day average for vaccines given is 25.8 million doses per day.

Johns Hopkins University & Medicine is reporting there have been 240.2 million cases worldwide, with a total of 4.89 million deaths.