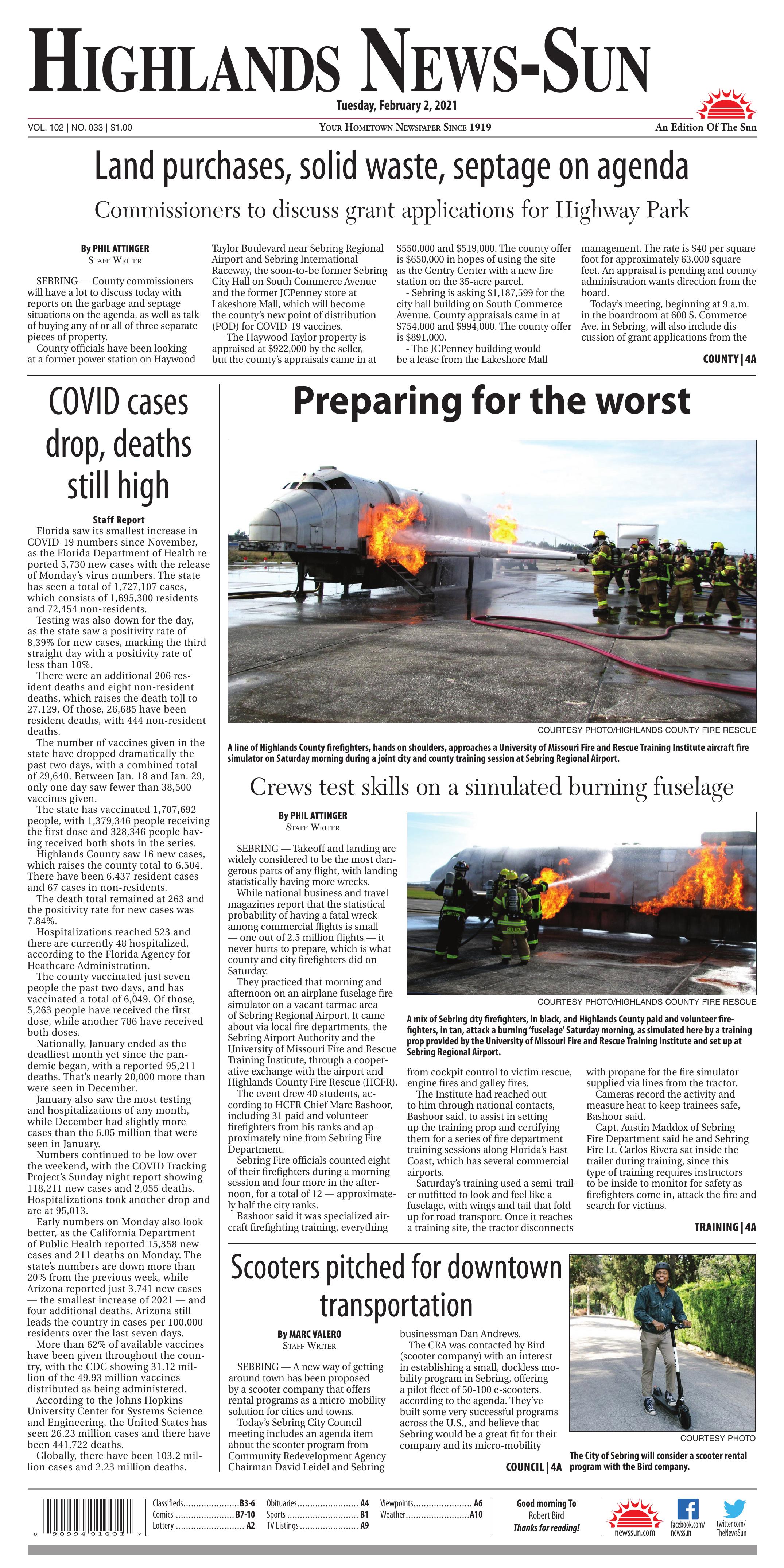 SEBRING — County commissioners will have a lot to discuss today with reports on the garbage and septage situations on the agenda, as well as talk of buying any of or all of three separate pieces of property.

County officials have been looking at a former power station on Haywood Taylor Boulevard near Sebring Regional Airport and Sebring International Raceway, the soon-to-be former Sebring City Hall on South Commerce Avenue and the former JCPenney store at Lakeshore Mall, which will become the county’s new point of distribution (POD) for COVID-19 vaccines.

- The JCPenney building would be a lease from the Lakeshore Mall management. The rate is $40 per square foot for approximately 63,000 square feet. An appraisal is pending and county administration wants direction from the board.

Today’s meeting, beginning at 9 a.m. in the boardroom at 600 S. Commerce Ave. in Sebring, will also include discussion of grant applications from the Highway Park community for a walking track and shade trees at Carver Park/MLK Park.

Also, the agenda will include a request to vacate an easement at a site on Cooper Drive in Sebring.

The printed agenda doesn’t contain any written proposals, yet, for how the county might handle issues with the county’s garbage hauler contract or the overall lack of places in the county to dump residential sewage pumped from septic tanks.

Both have come up in discussions recently. Commission Chair Scott Kirouac has said he wants options on either ending the county’s curbside recycling program or getting state officials to modify requirements that the county have 70-75% of its waste stream in recycling by 2020.

The previous commission, at its Sept. 1 meeting asked County Engineer Clinton Howerton Jr., whose department oversees solid waste and the county landfill, to find a solution to contaminated recycling materials finding their way into the loads, resulting in those loads getting dumped at the landfill.

At that time, 50% to 60% of recycling loads had contamination from unwashed or insufficiently washed-out food containers and from household garbage mixed into the bins, Howerton said.

His solution then was more education, since it was cheapest. Doing a mail-out would cost $11,000-$14,000, he said similar to the mailings local candidates did for the Nov. 3 election.

Howerton also suggested going back to twice-per-week garbage collection and once-a-week recycling pickup, which would need more drivers and would add $17-$19 per month to the residential garbage bill. Most people who hear about the increased cost, he said, are OK with once a week.

On Dec. 4, Kirouac — one of four new commissioners — had concern that suspected contaminated loads go to a transfer station at the Highlands County landfill, then get trucked south to Miami to a recycling facility. If confirmed as contaminated there, it’s trucked to a landfill in Osceola County.

“I don’t know about any of you, but that’s a negative environmental impact, and it’s not working,” Kirouac said at the time.

He favors a return to recycling drop-off sites with separate roll-off Dumpsters for each material. It didn’t result in the goal for recycling that the state set in 2010 to have 70-75% of the waste stream recycled by 2020. It was less than 30% last year, Howerton reported.

The septage situation was brought to the County Commission’s attention on Jan. 19 by local septic tank service company officials. Only one local wastewater treatment plant — Avon Park — takes pumped-out residential sewage from septic tanks, but can only process so much per day.

Septic service officials said their trucks arrive early in the morning to find out-of-county semi-trailer tankers already in line. When they can’t dump their trucks, then can’t take more service calls, and customers end up with raw sewage seeping to the surface of their lawns, running into streets.

A mix of Sebring city firefighters, in black, and Highlands County paid and volunteer firefighters, in tan, attack a burning ‘fuselage’ Saturday morning, as simulated here by a training prop provided by the University of Missouri Fire and Rescue Training Institute and set up at Sebring Regional Airport.

SEBRING — Takeoff and landing are widely considered to be the most dangerous parts of any flight, with landing statistically having more wrecks.

While national business and travel magazines report that the statistical probability of having a fatal wreck among commercial flights is small — one out of 2.5 million flights — it never hurts to prepare, which is what county and city firefighters did on Saturday.

They practiced that morning and afternoon on an airplane fuselage fire simulator on a vacant tarmac area of Sebring Regional Airport. It came about via local fire departments, the Sebring Airport Authority and the University of Missouri Fire and Rescue Training Institute, through a cooperative exchange with the airport and Highlands County Fire Rescue (HCFR).

The event drew 40 students, according to HCFR Chief Marc Bashoor, including 31 paid and volunteer firefighters from his ranks and approximately nine from Sebring Fire Department.

Sebring Fire officials counted eight of their firefighters during a morning session and four more in the afternoon, for a total of 12 — approximately half the city ranks.

Bashoor said it was specialized aircraft firefighting training, everything from cockpit control to victim rescue, engine fires and galley fires.

The Institute had reached out to him through national contacts, Bashoor said, to assist in setting up the training prop and certifying them for a series of fire department training sessions along Florida’s East Coast, which has several commercial airports.

Saturday’s training used a semi-trailer outfitted to look and feel like a fuselage, with wings and tail that fold up for road transport. Once it reaches a training site, the tractor disconnects with propane for the fire simulator supplied via lines from the tractor.

Capt. Austin Maddox of Sebring Fire Department said he and Sebring Fire Lt. Carlos Rivera sat inside the trailer during training, since this type of training requires instructors to be inside to monitor for safety as firefighters come in, attack the fire and search for victims.

“It was 100% zero visibility,” Maddox said of the training. “It’s one of the ones you don’t see every day but it’s great to have.”

Bashoor said SAA Executive Director Mike Willingham worked with him to provide a secure location off the Sebring Airport runway, suitable for a propane-fueled training prop.

The City of Sebring will consider a scooter rental program with the Bird company.

SEBRING — A new way of getting around town has been proposed by a scooter company that offers rental programs as a micro-mobility solution for cities and towns.

The CRA was contacted by Bird (scooter company) with an interest in establishing a small, dockless mobility program in Sebring, offering a pilot fleet of 50-100 e-scooters, according to the agenda. They’ve built some very successful programs across the U.S., and believe that Sebring would be a great fit for their company and its micro-mobility solution by bringing an additional form of mobility to the residents, and visitors, of Sebring.

Bird works closely with local government agencies to bring convenient, sustainable transit to communities while also ensuring city compliance. Bird’s mission is to get people out of cars, reduce traffic and bring communities together by providing an affordable, environmentally friendly transit alternative. Their goal is to make cities more livable and improve mobility by reducing car usage, traffic and carbon emissions.

The CRA connected Bird with Andrews, owner of Legacy Bicycles, to discuss the partnership opportunity of becoming Bird’s local fleet manager, according to the agenda. Andrews met with city and CRA staff, as well as the police department to review the opportunity and all aspects as it relates to the city and public safety.

The proposed scooter rental locations in Sebring include a few locations in the downtown and a few other locations on Lakeview Drive, including the Southgate Shopping Center and Veterans Beach.

Highlands News-Sun checked Bird’s listing of programs within Florida, which shows four locations in South Florida and one program in Tampa.

The City of Tampa had multiple companies with rental scooters, but the pandemic had reduced their usage. A notice from the city on Jan. 25 states that four companies are currently operating in Tampa.

The City of Tampa has engaged four of the nation’s largest shared micro-mobility companies (HOPR, BIRD, LIME and SPIN) to provide bicycles and e-scooters for Tampa’s downtown and surrounding neighborhoods.

The bicycles and motorized scooters will allow people to quickly and easily travel short distances and help commuters access public transit stops that are several miles away, according to the City of Tampa. These bicycles and e-scooters can replace short-distance car trips which helps reduce traffic levels and improves downtown mobility.

Florida saw its smallest increase in COVID-19 numbers since November, as the Florida Department of Health reported 5,730 new cases with the release of Monday’s virus numbers. The state has seen a total of 1,727,107 cases, which consists of 1,695,300 residents and 72,454 non-residents.

The number of vaccines given in the state have dropped dramatically the past two days, with a combined total of 29,640. Between Jan. 18 and Jan. 29, only one day saw fewer than 38,500 vaccines given.

Highlands County saw 16 new cases, which raises the county total to 6,504. There have been 6,437 resident cases and 67 cases in non-residents.

The death total remained at 263 and the positivity rate for new cases was 7.84%.

Hospitalizations reached 523 and there are currently 48 hospitalized, according to the Florida Agency for Heathcare Administration.

The county vaccinated just seven people the past two days, and has vaccinated a total of 6,049. Of those, 5,263 people have received the first dose, while another 786 have received both doses.

Nationally, January ended as the deadliest month yet since the pandemic began, with a reported 95,211 deaths. That’s nearly 20,000 more than were seen in December.

January also saw the most testing and hospitalizations of any month, while December had slightly more cases than the 6.05 million that were seen in January.

Numbers continued to be low over the weekend, with the COVID Tracking Project’s Sunday night report showing 118,211 new cases and 2,055 deaths. Hospitalizations took another drop and are at 95,013.

Early numbers on Monday also look better, as the California Department of Public Health reported 15,358 new cases and 211 deaths on Monday. The state’s numbers are down more than 20% from the previous week, while Arizona reported just 3,741 new cases — the smallest increase of 2021 — and four additional deaths. Arizona still leads the country in cases per 100,000 residents over the last seven days.

More than 62% of available vaccines have been given throughout the country, with the CDC showing 31.12 million of the 49.93 million vaccines distributed as being administered.

According to the Johns Hopkins University Center for Systems Science and Engineering, the United States has seen 26.23 million cases and there have been 441,722 deaths.

Globally, there have been 103.2 million cases and 2.23 million deaths.