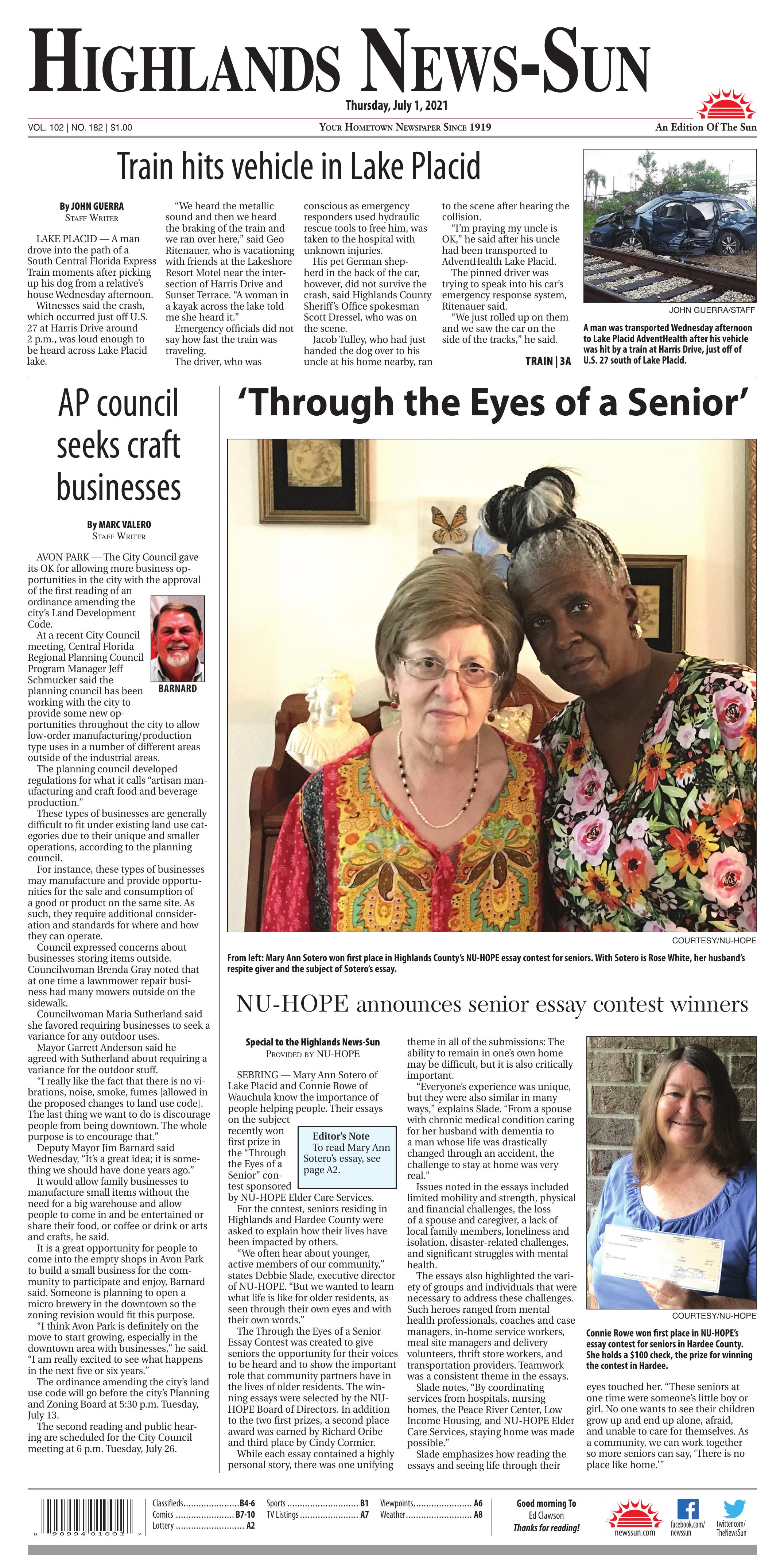 A man was transported Wednesday afternoon to Lake Placid AdventHealth after his vehicle was hit by a train at Harris Drive, just off of U.S. 27 south of Lake Placid.

LAKE PLACID — A man drove into the path of a South Central Florida Express Train moments after picking up his dog from a relative’s house Wednesday afternoon.

Witnesses said the crash, which occurred just off U.S. 27 at Harris Drive around 2 p.m., was loud enough to be heard across Lake Placid lake.

“We heard the metallic sound and then we heard the braking of the train and we ran over here,” said Geo Ritenauer, who is vacationing with friends at the Lakeshore Resort Motel near the intersection of Harris Drive and Sunset Terrace. “A woman in a kayak across the lake told me she heard it.”

Emergency officials did not say how fast the train was traveling.

The driver, who was conscious as emergency responders used hydraulic rescue tools to free him, was taken to the hospital with unknown injuries.

His pet German shepherd in the back of the car, however, did not survive the crash, said Highlands County Sheriff’s Office spokesman Scott Dressel, who was on the scene.

Jacob Tulley, who had just handed the dog over to his uncle at his home nearby, ran to the scene after hearing the collision.

“I’m praying my uncle is OK,” he said after his uncle had been transported to AdventHealth Lake Placid.

The pinned driver was trying to speak into his car’s emergency response system, Ritenauer said.

“We just rolled up on them and we saw the car on the side of the tracks,” he said. “By the time we got to the car, he was coherent and he was talking to the OnStar lady,” the Valrico resident said. “The Onstar lady couldn’t make out what he was saying and we were relaying information to her, all the questions she was asking.”

The driver told Ritenauer that he had just picked his dog up before the crash.

The train, which stopped a hundred yards down the track after demolishing the driver’s side of the car, had a broken hose on its front end, a Highlands County Fire Rescue official said.

SCFE Train engineers, uninjured but a little shaken by the events, could be seen answering questions posed by a Florida Highway Patrol investigator.

“I’ve seen extrications after train collisions perhaps twice in my 25 years,” he said. “There have been about 10 train-vehicle accidents in the county during the same time period.”

“What drivers need to do when they approach is to look both ways, roll your windows down and listen for a horn,” Andrews said. “If you don’t hear a train horn, you better be looking. These things don’t stop on a dime.”

Connie Rowe won first place in NU-HOPE’s essay contest for seniors in Hardee County. She holds a $100 check, the prize for winning the contest in Hardee.

SEBRING — Mary Ann Sotero of Lake Placid and Connie Rowe of Wauchula know the importance of people helping people. Their essays on the subject recently won first prize in the “Through the Eyes of a Senior” contest sponsored by NU-HOPE Elder Care Services.

For the contest, seniors residing in Highlands and Hardee County were asked to explain how their lives have been impacted by others.

“We often hear about younger, active members of our community,” states Debbie Slade, executive director of NU-HOPE. “But we wanted to learn what life is like for older residents, as seen through their own eyes and with their own words.”

The Through the Eyes of a Senior Essay Contest was created to give seniors the opportunity for their voices to be heard and to show the important role that community partners have in the lives of older residents. The winning essays were selected by the NU-HOPE Board of Directors. In addition to the two first prizes, a second place award was earned by Richard Oribe and third place by Cindy Cormier.

While each essay contained a highly personal story, there was one unifying theme in all of the submissions: The ability to remain in one’s own home may be difficult, but it is also critically important.

“Everyone’s experience was unique, but they were also similar in many ways,” explains Slade. “From a spouse with chronic medical condition caring for her husband with dementia to a man whose life was drastically changed through an accident, the challenge to stay at home was very real.”

Issues noted in the essays included limited mobility and strength, physical and financial challenges, the loss of a spouse and caregiver, a lack of local family members, loneliness and isolation, disaster-related challenges, and significant struggles with mental health.

The essays also highlighted the variety of groups and individuals that were necessary to address these challenges. Such heroes ranged from mental health professionals, coaches and case managers, in-home service workers, meal site managers and delivery volunteers, thrift store workers, and transportation providers. Teamwork was a consistent theme in the essays.

Slade emphasizes how reading the essays and seeing life through their eyes touched her. “These seniors at one time were someone’s little boy or girl. No one wants to see their children grow up and end up alone, afraid, and unable to care for themselves. As a community, we can work together so more seniors can say, ‘There is no place like home.’”

AVON PARK — The City Council gave its OK for allowing more business opportunities in the city with the approval of the first reading of an ordinance amending the city’s Land Development Code.

At a recent City Council meeting, Central Florida Regional Planning Council Program Manager Jeff Schmucker said the planning council has been working with the city to provide some new opportunities throughout the city to allow low-order manufacturing/production type uses in a number of different areas outside of the industrial areas.

The planning council developed regulations for what it calls “artisan manufacturing and craft food and beverage production.”

These types of businesses are generally difficult to fit under existing land use categories due to their unique and smaller operations, according to the planning council.

For instance, these types of businesses may manufacture and provide opportunities for the sale and consumption of a good or product on the same site. As such, they require additional consideration and standards for where and how they can operate.

Council expressed concerns about businesses storing items outside. Councilwoman Brenda Gray noted that at one time a lawnmower repair business had many mowers outside on the sidewalk.

Councilwoman Maria Sutherland said she favored requiring businesses to seek a variance for any outdoor uses.

Mayor Garrett Anderson said he agreed with Sutherland about requiring a variance for the outdoor stuff.

“I really like the fact that there is no vibrations, noise, smoke, fumes [allowed in the proposed changes to land use code]. The last thing we want to do is discourage people from being downtown. The whole purpose is to encourage that.”

Deputy Mayor Jim Barnard said Wednesday, “It’s a great idea; it is something we should have done years ago.”

It would allow family businesses to manufacture small items without the need for a big warehouse and allow people to come in and be entertained or share their food, or coffee or drink or arts and crafts, he said.

It is a great opportunity for people to come into the empty shops in Avon Park to build a small business for the community to participate and enjoy, Barnard said. Someone is planning to open a micro brewery in the downtown so the zoning revision would fit this purpose.

“I think Avon Park is definitely on the move to start growing, especially in the downtown area with businesses,” he said. “I am really excited to see what happens in the next five or six years.”

The ordinance amending the city’s land use code will go before the city’s Planning and Zoning Board at 5:30 p.m. Tuesday, July 13.

The second reading and public hearing are scheduled for the City Council meeting at 6 p.m. Tuesday, July 26.