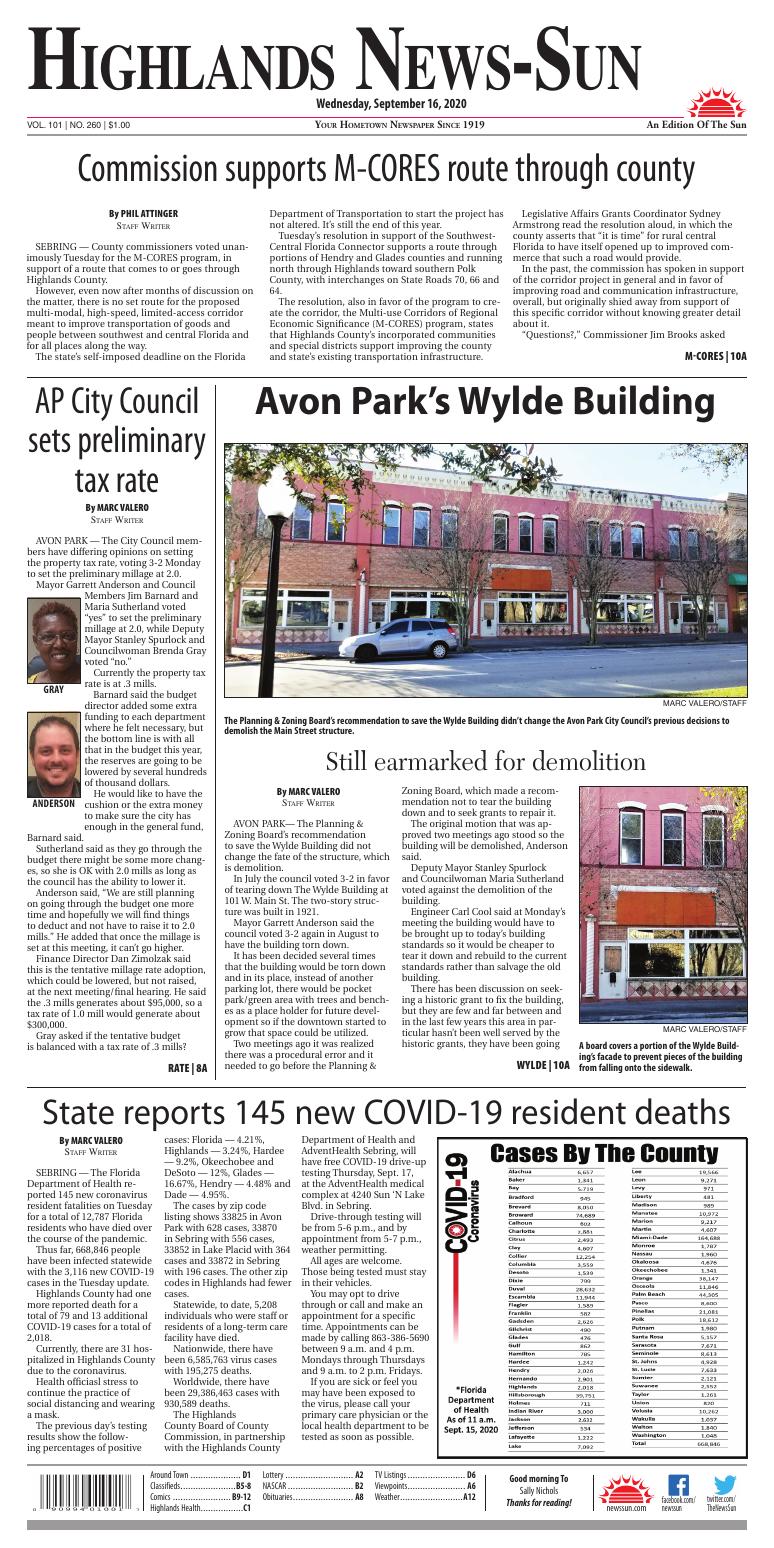 SEBRING — County commissioners voted unanimously Tuesday for the M-CORES program, in support of a route that comes to or goes through Highlands County.

However, even now after months of discussion on the matter, there is no set route for the proposed multi-modal, high-speed, limited-access corridor meant to improve transportation of goods and people between southwest and central Florida and for all places along the way.

The state’s self-imposed deadline on the Florida Department of Transportation to start the project has not altered. It’s still the end of this year.

Tuesday’s resolution in support of the Southwest-Central Florida Connector supports a route through portions of Hendry and Glades counties and running north through Highlands toward southern Polk County, with interchanges on State Roads 70, 66 and 64.

The resolution, also in favor of the program to create the corridor, the Multi-use Corridors of Regional Economic Significance (M-CORES) program, states that Highlands County’s incorporated communities and special districts support improving the county and state’s existing transportation infrastructure.

Legislative Affairs Grants Coordinator Sydney Armstrong read the resolution aloud, in which the county asserts that “it is time” for rural central Florida to have itself opened up to improved commerce that such a road would provide.

In the past, the commission has spoken in support of the corridor project in general and in favor of improving road and communication infrastructure, overall, but originally shied away from support of this specific corridor without knowing greater detail about it.

“Questions?,” Commissioner Jim Brooks asked after the end of the reading.

“Comments?” Handley repeated. “Or make a motion. Whatever you want to do.”

“Maybe all of the above,” Brooks said.

Commissioner Jim Brooks cautioned that the resolution, as written and read into the record, makes it sound as though the route will definitely come through Highlands County.

“We really don’t know that yet,” Brooks said.

“We definitely don’t know that yet,” Handley said.

“And we probably won’t,” Brooks added.

Brooks said he would still support the road if it hugs the county line, east or west, and wants to make sure the resolution reflects that.

Interim County Attorney Sherri Sutphen said the resolution mirrors language used by other counties and municipalities that agree with the Highlands or near-Highlands alignment.

“I think that, of course, they would assume that anything close to this you would be happy with, but that would be your preferred alignment,” Sutphen said.

With that, Brooks made a motion to approve the resolution and Commissioner Arlene Tuck seconded it. It passed unanimously.

After the meeting, Commissioner Don Elwell said he wasn’t sure what was the latest version of the alignment, and had heard one option that included some of U.S. 27.

He said he was not sure if it wouldn’t be better to be alongside the county, given the cost of right of way and the need to serve but not destroy developed and environmentally-sensitive areas. He hopes that bringing the corridor to or near the county would help bring improvements to the county’s east-west corridors, at least.

“I think it will be an economic boon for us. I just don’t know to what extent,” Elwell said.

AVON PARK— The Planning & Zoning Board’s recommendation to save the Wylde Building did not change the fate of the structure, which is demolition.

In July the council voted 3-2 in favor of tearing down The Wylde Building at 101 W. Main St. The two-story structure was built in 1921.

Mayor Garrett Anderson said the council voted 3-2 again in August to have the building torn down.

It has been decided several times that the building would be torn down and in its place, instead of another parking lot, there would be pocket park/green area with trees and benches as a place holder for future development so if the downtown started to grow that space could be utilized.

Two meetings ago it was realized there was a procedural error and it needed to go before the Planning & Zoning Board, which made a recommendation not to tear the building down and to seek grants to repair it.

The original motion that was approved two meetings ago stood so the building will be demolished, Anderson said.

Deputy Mayor Stanley Spurlock and Councilwoman Maria Sutherland voted against the demolition of the building.

Engineer Carl Cool said at Monday’s meeting the building would have to be brought up to today’s building standards so it would be cheaper to tear it down and rebuild to the current standards rather than salvage the old building.

There has been discussion on seeking a historic grant to fix the building, but they are few and far between and in the last few years this area in particular hasn’t been well served by the historic grants, they have been going to the coast, Cool said. It’s not likely that will change in the near future.

Cool told the council on Monday that the building has incurred substantial damage from storms and hurricanes. There has been a lot of structural damage because of rotting inside and years of deterioration inside that has been occurring over and over.

“Essentially, you are going to end up replacing the building with a whole other building,” he said. “It is your decision to make; you own the building.

“You ran into the very same thing at the old fire station down at the end of Butler and you made the decision to have that building removed.”

Councilman Jim Barnard said there is no historic value in a new building.

Anderson responded, in his opinion, there is no historic value in that building.

Jean Jordan, of the Historical Society of Avon Park and the Zoning Board, commented on the issue through remote conferencing.

She realizes there has been a lot of damage that has been allowed to happen, but it is not the building’s fault that the owners didn’t maintain it. Jordan said it is a historical building and the city can get grants for it and the Brickell Building.

“It is about time that somebody stood up for the town of Avon Park and not destroy everything historical down there,” she said.

At the end of the discussion on the issue, nothing changed from last month’s vote to demolish the building.

SEBRING — The Florida Department of Health reported 145 new coronavirus resident fatalities on Tuesday for a total of 12,787 Florida residents who have died over the course of the pandemic.

Currently, there are 31 hospitalized in Highlands County due to the coronavirus.

Health officiasl stress to continue the practice of social distancing and wearing a mask.

Statewide, to date, 5,208 individuals who were staff or residents of a long-term care facility have died.

Drive-through testing will be from 5-6 p.m., and by appointment from 5-7 p.m., weather permitting.

All ages are welcome. Those being tested must stay in their vehicles.

If you are sick or feel you may have been exposed to the virus, please call your primary care physician or the local health department to be tested as soon as possible.

AVON PARK — The City Council members have differing opinions on setting the property tax rate, voting 3-2 Monday to set the preliminary millage at 2.0.

Currently the property tax rate is at .3 mills.

Barnard said the budget director added some extra funding to each department where he felt necessary, but the bottom line is with all that in the budget this year, the reserves are going to be lowered by several hundreds of thousand dollars.

He would like to have the cushion or the extra money to make sure the city has enough in the general fund, Barnard said.

Sutherland said as they go through the budget there might be some more changes, so she is OK with 2.0 mills as long as the council has the ability to lower it.

Anderson said, “We are still planning on going through the budget one more time and hopefully we will find things to deduct and not have to raise it to 2.0 mills.” He added that once the millage is set at this meeting, it can’t go higher.

Finance Director Dan Zimolzak said this is the tentative millage rate adoption, which could be lowered, but not raised, at the next meeting/final hearing. He said the .3 mills generates about $95,000, so a tax rate of 1.0 mill would generate about $300,000.

Gray asked if the tentative budget is balanced with a tax rate of .3 mills? Zimolzak said that is correct.

Anderson said the budget is not balanced.

Zimolzak said at this point about $400,000 in reserves would be needed to balance the budget.

Gray said she would prefer that the millage remain the same as the current rate of .3 mills rather than moving it up to 2 mills. She pointed out that many people have lost their jobs during this time. She would prefer any increase be done in next year’s budget when city officials will know more on how the economy will be.

Anderson said it would not be wise to limit the tax rate to .3 mills.

Barnard said he agreed with Gray that it has been a difficult year for many citizens, but he believes the tentative rate should remain at 2.0 mills until further discussion.

The notice of the tax increase and hearing date will be advertised between Sept. 23 and Sept. 26 with the meeting/hearing to adopt the final budget and millage rate on Sept. 28. 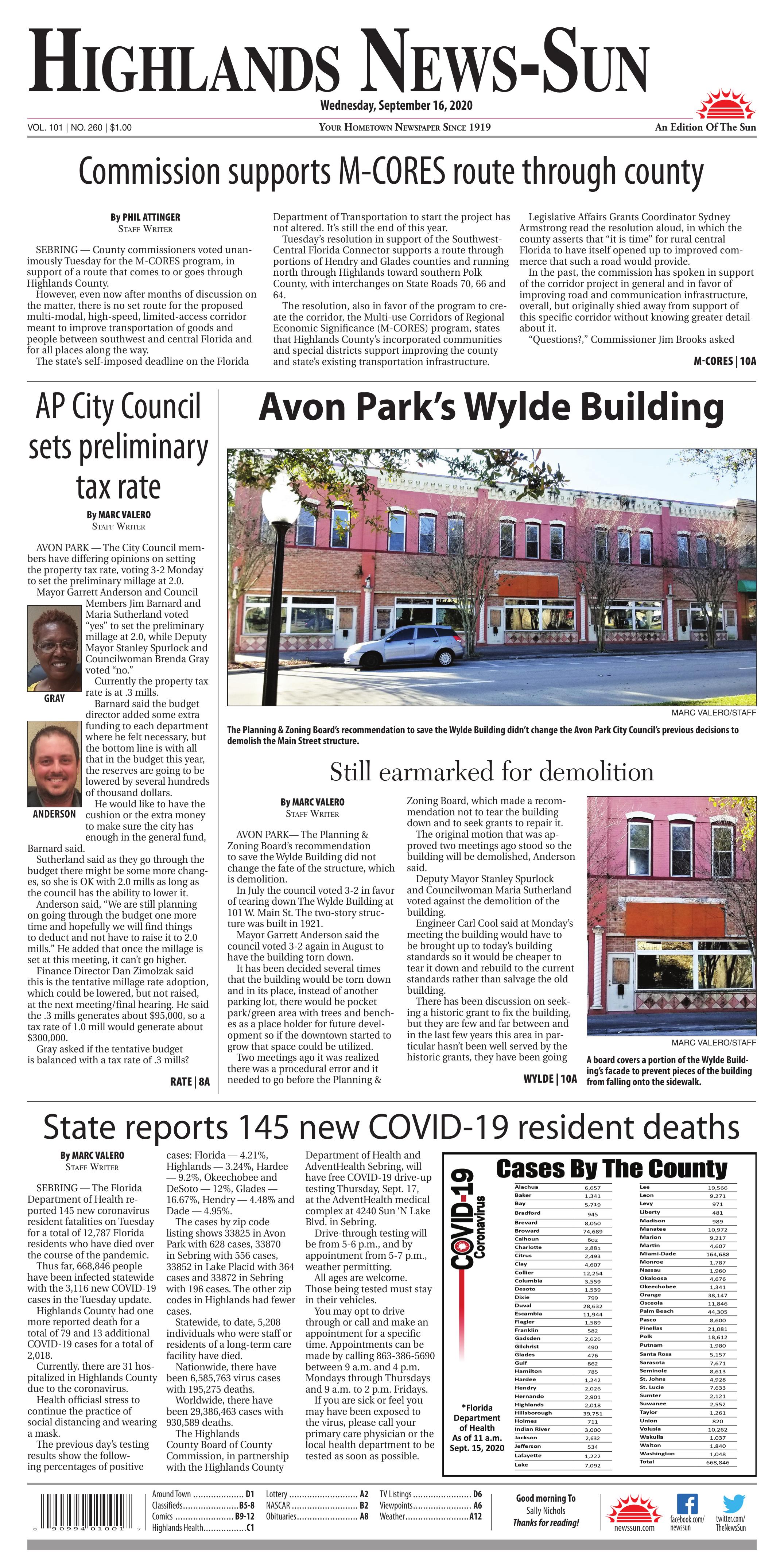