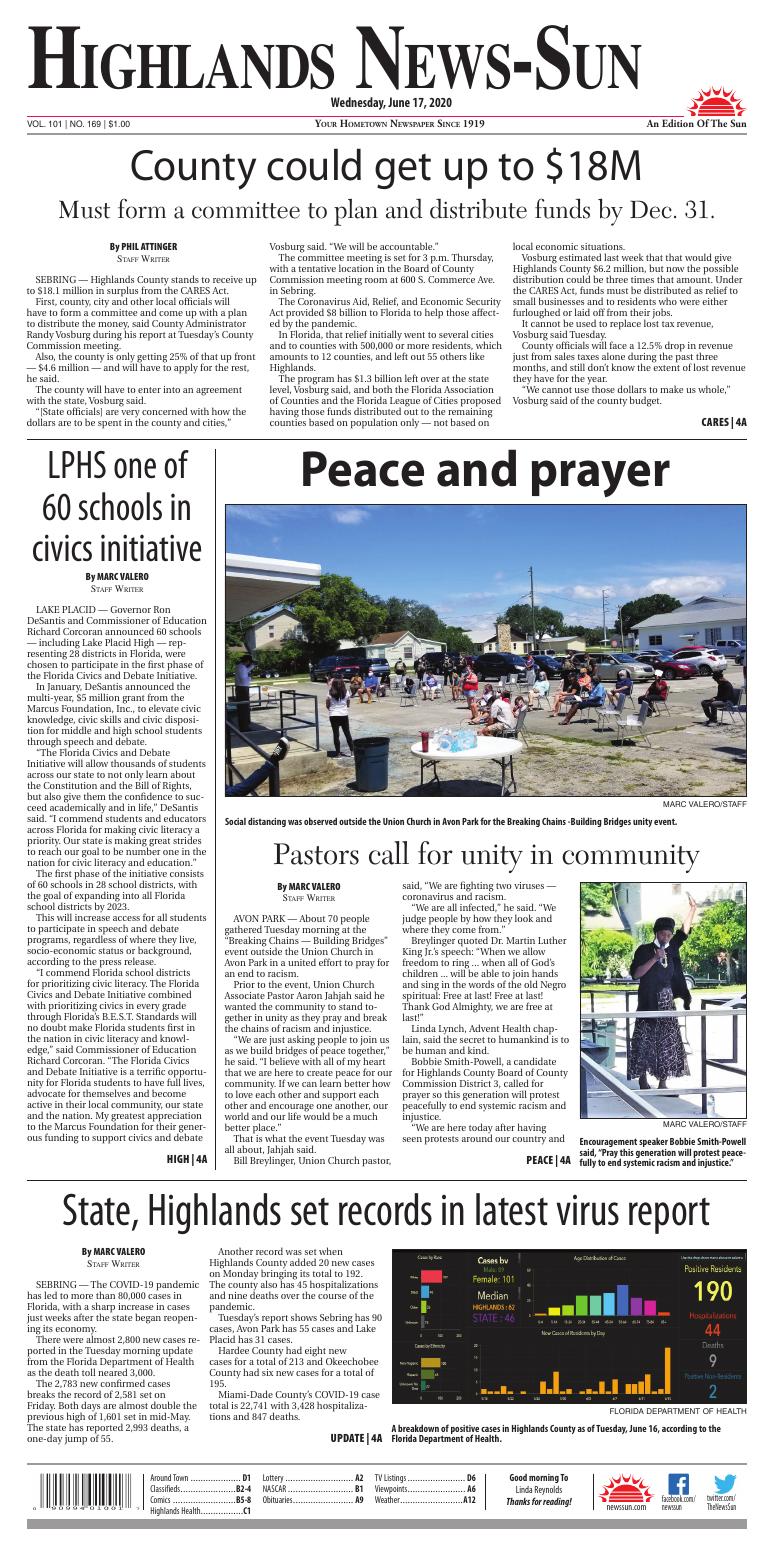 SEBRING — Highlands County stands to receive up to $18.1 million in surplus from the CARES Act.

First, county, city and other local officials will have to form a committee and come up with a plan to distribute the money, said County Administrator Randy Vosburg during his report at Tuesday’s County Commission meeting.

The county will have to enter into an agreement with the state, Vosburg said.

“[State officials] are very concerned with how the dollars are to be spent in the county and cities,” Vosburg said. “We will be accountable.”

The committee meeting is set for 3 p.m. Thursday, with a tentative location in the Board of County Commission meeting room at 600 S. Commerce Ave. in Sebring.

The Coronavirus Aid, Relief, and Economic Security Act provided $8 billion to Florida to help those affected by the pandemic.

In Florida, that relief initially went to several cities and to counties with 500,000 or more residents, which amounts to 12 counties, and left out 55 others like Highlands.

The program has $1.3 billion left over at the state level, Vosburg said, and both the Florida Association of Counties and the Florida League of Cities proposed having those funds distributed out to the remaining counties based on population only — not based on local economic situations.

Vosburg estimated last week that that would give Highlands County $6.2 million, but now the possible distribution could be three times that amount. Under the CARES Act, funds must be distributed as relief to small businesses and to residents who were either furloughed or laid off from their jobs.

County officials will face a 12.5% drop in revenue just from sales taxes alone during the past three months, and still don’t know the extent of lost revenue they have for the year.

“We cannot use those dollars to make us whole,” Vosburg said of the county budget.

Funds must be distributed to the community, and specifically to those who have lost employment as a result of the COVID-19 pandemic.

Vosburg called it a “pretty big undertaking,” since the funds must be distributed by Dec. 31, 2020.

“So we don’t have a very large window,” he said.

Commissioner Greg Harris asked if the county could use part of the funds to pay the cost of administering the funds. Vosburg said he would look into that.

Vosburg said the funds could also be used to cover costs that counties and cities have incurred from responding to the pandemic, instead of applying to and waiting on the Federal Emergency Management Agency.

“A bird in the hand is better than waiting on FEMA,” Commission Chair Ron Handley said.

Commissioner Don Elwell agreed, as long as the county first meets the needs of individuals who have struggled through the pandemic.

The meeting on Thursday will be publicly noticed, and open to the public, although input will be confined to members of the committee, Vosburg said.

Commissioners also advised Vosburg to work with local entities to get good representation while keeping the number of committee members to a minimum, for greater efficiency and speed in formulating a distribution plan.

Commissioner Jim Brooks said he thinks the committee will have a hard time spending that amount of money within the guidelines and timeline they’ve been given.

Social distancing was observed outside the Union Church in Avon Park for the Breaking Chains -Building Bridges unity event.

Part of the gathering near the Union Church in Avon Park for Tuesday morning’s event for unity in the effort to break the chains of racism and injustice.

AVON PARK — About 70 people gathered Tuesday morning at the "Breaking Chains - Building Bridges" event outside the Union Church in Avon Park in a united effort to pray for an end to racism.

Prior to the event, Union Church Associate Pastor Aaron Jahjah said he wanted the community to stand together in unity as they pray and break the chains of racism and injustice.

"We are just asking people to join us as we build bridges of peace together," he said. "I believe with all of my heart that we are here to create peace for our community. If we can learn better how to love each other and support each other and encourage one another, our world and our life would be a much better place."

That is what the event Tuesday was all about, Jahjah said.

"We are all infected," he said. "We judge people by how they look and where they come from."

Breylinger quoted Dr. Martin Luther King Jr.'s speech: "When we allow freedom to ring ... when all of God's children ... will be able to join hands and sing in the words of the old Negro spiritual: Free at last! Free at last! Thank God Almighty, we are free at last!"

Linda Lynch, Advent Health chaplain, said the secret to humankind is to be human and kind.

Bobbie Smith-Powell, a candidate for Highlands County Board of County Commission District 3, called for prayer so this generation will protest peacefully to end systemic racism and injustice.

"We are here today after having seen protests around our country and around this world and even in right here in Avon Park, Florida," Smith-Powell said. "And yet we have had more killings."

George Miller, pastor of Emmanuel UCC, noted Avon Park High School was desegregated in 1969, but it wasn't until 1983 when Avon Park had its first black firefighter.

He noted that some who are attending the event may get a sunburn.

"Sunburns go away, unfortunately the acts of discrimination and racism do not, without us intentionally doing the work we need to do," Miller said.

A breakdown of positive cases in Highlands County as of Tuesday, June 16, according to the Florida Department of Health.

SEBRING — The COVID-19 pandemic has led to more than 80,000 cases in Florida, with a sharp increase in cases just weeks after the state began reopening its economy.

There were almost 2,800 new cases reported in the Tuesday morning update from the Florida Department of Health as the death toll neared 3,000.

Another record was set when Highlands County added 20 new cases on Monday bringing its total to 192. The county also has 45 hospitalizations and nine deaths over the course of the pandemic.

Gov. Ron DeSantis last week said the upward trend in confirmed cases is mostly a reflection of more testing being conducted combined with some spikes in some agriculture communities, but the number of tests conducted daily peaked three weeks ago and the percentage of positive tests is now over 6%, more than double the rate of 2.3% in late May, according to a report from the Associated Press.

The governor’s press office did not immediately return a call to the Associated Press seeking comment Tuesday on the increase and the health department has not responded to multiple phone and email requests for comment made since Monday.

LAKE PLACID — Governor Ron DeSantis and Commissioner of Education Richard Corcoran announced 60 schools — including Lake Placid High — representing 28 districts in Florida, were chosen to participate in the first phase of the Florida Civics and Debate Initiative.

In January, DeSantis announced the multi-year, $5 million grant from the Marcus Foundation, Inc., to elevate civic knowledge, civic skills and civic disposition for middle and high school students through speech and debate.

“The Florida Civics and Debate Initiative will allow thousands of students across our state to not only learn about the Constitution and the Bill of Rights, but also give them the confidence to succeed academically and in life,” DeSantis said. “I commend students and educators across Florida for making civic literacy a priority. Our state is making great strides to reach our goal to be number one in the nation for civic literacy and education.”

This will increase access for all students to participate in speech and debate programs, regardless of where they live, socio-economic status or background, according to the press release.

“I commend Florida school districts for prioritizing civic literacy. The Florida Civics and Debate Initiative combined with prioritizing civics in every grade through Florida’s B.E.S.T. Standards will no doubt make Florida students first in the nation in civic literacy and knowledge,” said Commissioner of Education Richard Corcoran. “The Florida Civics and Debate Initiative is a terrific opportunity for Florida students to have full lives, advocate for themselves and become active in their local community, our state and the nation. My greatest appreciation to the Marcus Foundation for their generous funding to support civics and debate in Florida schools.”

Before the COVID-19 pandemic, Florida launched a civic literacy pilot program in two Florida school districts. Many districts expressed interest in participating but were stymied due to school campus closures.

FDOE applauds these districts and students for prioritizing civic literacy, and recognizing the need for a quality civic education. Of those that participated, 36% of students passed the assessment. While this is just a small sample, it explicitly depicts the need for greater exposure to civics education.

The only other Heartland area schools in the initial 60 chosen for the initiative are West Glades School K-8 and Moore Haven Middle High School in Glades County. 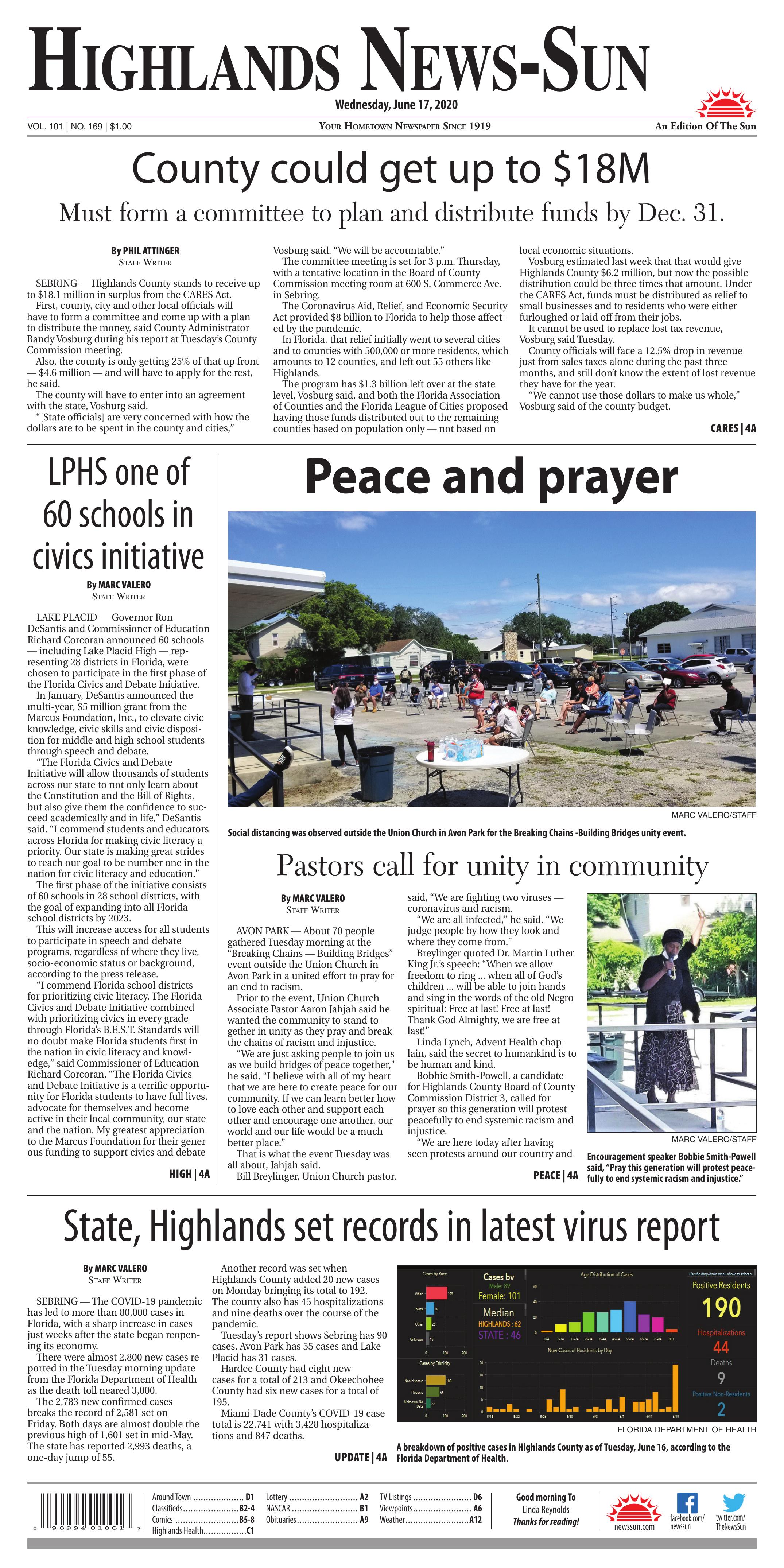