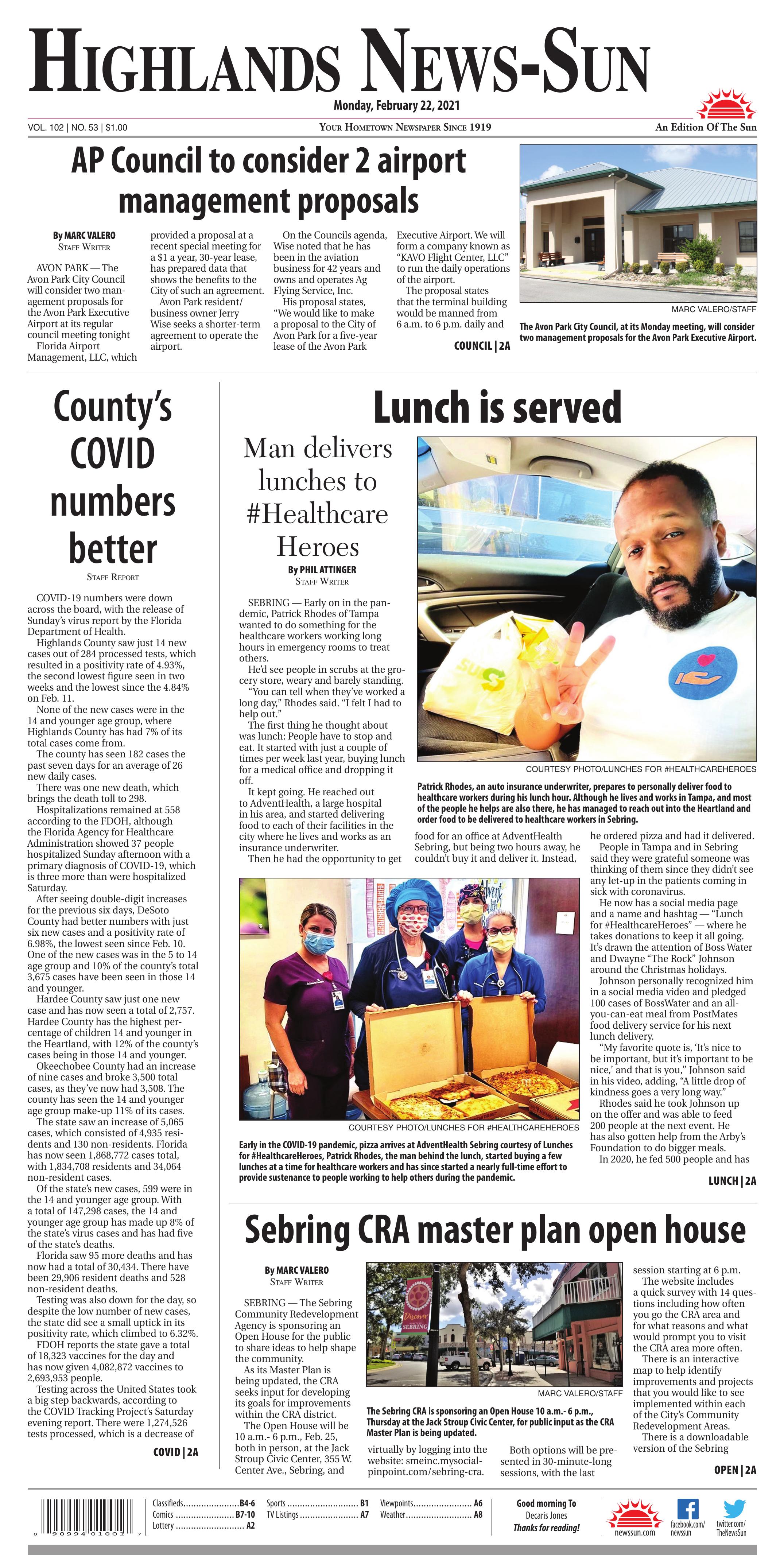 The Avon Park City Council, at its Monday meeting, will consider two management proposals for the Avon Park Executive Airport.

Florida Airport Management, LLC, which provided a proposal at a recent special meeting for a $1 a year, 30-year lease, has prepared data that shows the benefits to the City of such an agreement.

On the Councils agenda, Wise noted that he has been in the aviation business for 42 years and owns and operates Ag Flying Service, Inc.

His proposal states, “We would like to make a proposal to the City of Avon Park for a five-year lease of the Avon Park Executive Airport. We will form a company known as “KAVO Flight Center, LLC” to run the daily operations of the airport.

The proposal states that the terminal building would be manned from 6 a.m. to 6 p.m. daily and KAVO would be responsible for renting and collecting funds for all airport rental properties and be responsible for purchase and sales of both JET A and AV gas and provide trained personnel to operate the JET A fuel truck.

The proposal also calls for the creation of an Airport Advisory Committee consisting of six individuals that have direct ties and interest in the airport through renting a hangar and/or business located at the airport. A “KAVO Flight Center” representative would chair the committee.

Concerning the other airport lease proposal, Florida Airport Management (FAM) L.L.C. President J.T. Clark stated in a memo to the City that he wanted to provide a clearer value proposition of what FAM can bring to the City of Avon Park.

Currently a few of the council members are of the opinion that a $1 per year lease does not provide any net gains to the City of Avon Park, therefore it has been publicly stated that this is not a partnership but rather a “land grab” that will somehow adversely affect the children and grandchildren of Avon Park, he said.

This sentiment could not be further from the truth, Clark said.

“We will provide a detailed analysis of the airport’s past financials and budget for this year on Monday’s meeting,” he said. “Our goal in doing this is to provide the council members an understanding of how the airport is currently performing, as well as, to highlight some of the missed calculations that are currently reflected on the documents provided to us.”

In contrast, Florida Airport Management is providing a team that encompasses almost every trade and discipline required to professionally manage and develop the airport, he said.

To break out this value over a 30-year lease agreement the cost to the city would be approximately $3,600,000 dollars to retain a single airport director, whereas the City would have a net gain of $11,556,000 dollars in management fees to oversee and reposition the airport to a performing asset, Clark stated.

Early in the COVID-19 pandemic, pizza arrives at AdventHealth Sebring courtesy of Lunches for #HealthcareHeroes, Patrick Rhodes, the man behind the lunch, started buying a few lunches at a time for healthcare workers and has since started a nearly full-time effort to provide sustenance to people working to help others during the pandemic.

SEBRING — Early on in the pandemic, Patrick Rhodes of Tampa wanted to do something for the healthcare workers working long hours in emergency rooms to treat others.

He’d see people in scrubs at the grocery store, weary and barely standing.

“You can tell when they’ve worked a long day,” Rhodes said. “I felt I had to help out.”

The first thing he thought about was lunch: People have to stop and eat. It started with just a couple of times per week last year, buying lunch for a medical office and dropping it off.

It kept going. He reached out to AdventHealth, a large hospital in his area, and started delivering food to each of their facilities in the city where he lives and works as an insurance underwriter.

Then he had the opportunity to get food for an office at AdventHealth Sebring, but being two hours away, he couldn’t buy it and deliver it. Instead, he ordered pizza and had it delivered.

People in Tampa and in Sebring said they were grateful someone was thinking of them since they didn’t see any let-up in the patients coming in sick with coronavirus.

He now has a social media page and a name and hashtag — “Lunch for #HealthcareHeroes” — where he takes donations to keep it all going. It’s drawn the attention of Boss Water and Dwayne “The Rock” Johnson around the Christmas holidays.

Johnson personally recognized him in a social media video and pledged 100 cases of BossWater and an all-you-can-eat meal from PostMates food delivery service for his next lunch delivery.

“My favorite quote is, ‘It’s nice to be important, but it’s important to be nice,’ and that is you,” Johnson said in his video, adding, “A little drop of kindness goes a very long way.”

Rhodes said he took Johnson up on the offer and was able to feed 200 people at the next event. He has also gotten help from the Arby’s Foundation to do bigger meals.

The Sebring CRA is sponsoring an Open House 10 a.m.- 6 p.m., Thursday at the Jack Stroup Civic Center, for public input as the CRA Master Plan is being updated.

SEBRING — The Sebring Community Redevelopment Agency is sponsoring an Open House for the public to share ideas to help shape the community.

As its Master Plan is being updated, the CRA seeks input for developing its goals for improvements within the CRA district.

The Open House will be 10 a.m.- 6 p.m., Feb. 25, both in person, at the Jack Stroup Civic Center, 355 W. Center Ave., Sebring, and virtually by logging into the website: smeinc.mysocialpinpoint.com/sebring-cra.

Both options will be presented in 30-minute-long sessions, with the last session starting at 6 p.m.

The website includes a quick survey with 14 questions including how often you go the CRA area and for what reasons and what would prompt you to visit the CRA area more often.

There is an interactive map to help identify improvements and projects that you would like to see implemented within each of the City’s Community Redevelopment Areas.

There is a downloadable version of the Sebring Community Redevelopment Areas Map and a link to the previous CRA plan, which was completed in 2004.

The Master Plan update kicked-off in January. The timeline calls for public involvement and data synthesis from January through March, the plan being updated in April and May and the CRA plan adoption in June.

The CRA has contracted with the S&ME firm, which is conducting the various processes in the plan update.

COVID-19 numbers were down across the board, with the release of Sunday’s virus report by the Florida Department of Health.

Highlands County saw just 14 new cases out of 284 processed tests, which resulted in a positivity rate of 4.93%, the second lowest figure seen in two weeks and the lowest since the 4.84% on Feb. 11.

None of the new cases were in the 14 and younger age group, where Highlands County has had 7% of its total cases come from.

The county has seen 182 cases the past seven days for an average of 26 new daily cases.

There was one new death, which brings the death toll to 298.

Hospitalizations remained at 558 according to the FDOH, although the Florida Agency for Healthcare Administration showed 37 people hospitalized Sunday afternoon with a primary diagnosis of COVID-19, which is three more than were hospitalized Saturday.

After seeing double-digit increases for the previous six days, DeSoto County had better numbers with just six new cases and a positivity rate of 6.98%, the lowest seen since Feb. 10. One of the new cases was in the 5 to 14 age group and 10% of the county’s total 3,675 cases have been seen in those 14 and younger.

Okeechobee County had an increase of nine cases and broke 3,500 total cases, as they’ve now had 3,508. The county has seen the 14 and younger age group make-up 11% of its cases.

Testing was also down for the day, so despite the low number of new cases, the state did see a small uptick in its positivity rate, which climbed to 6.32%.

Testing across the United States took a big step backwards, according to the COVID Tracking Project’s Saturday evening report. There were 1,274,526 tests processed, which is a decrease of more than 600,000 from the previous day and testing as a whole is down 16% from the previous week.

Early numbers from Sunday were better, with California reporting 6,760 new cases and 280 deaths, while Arizona saw 1,804 new cases and deaths were down to 25.

According to the Johns Hopkins University Center for Systems Science and Engineering, the U.S. has seen 28.1 million cases and had 498,384 deaths.

Globally, there have been 111.2 million cases and 2.46 million deaths.