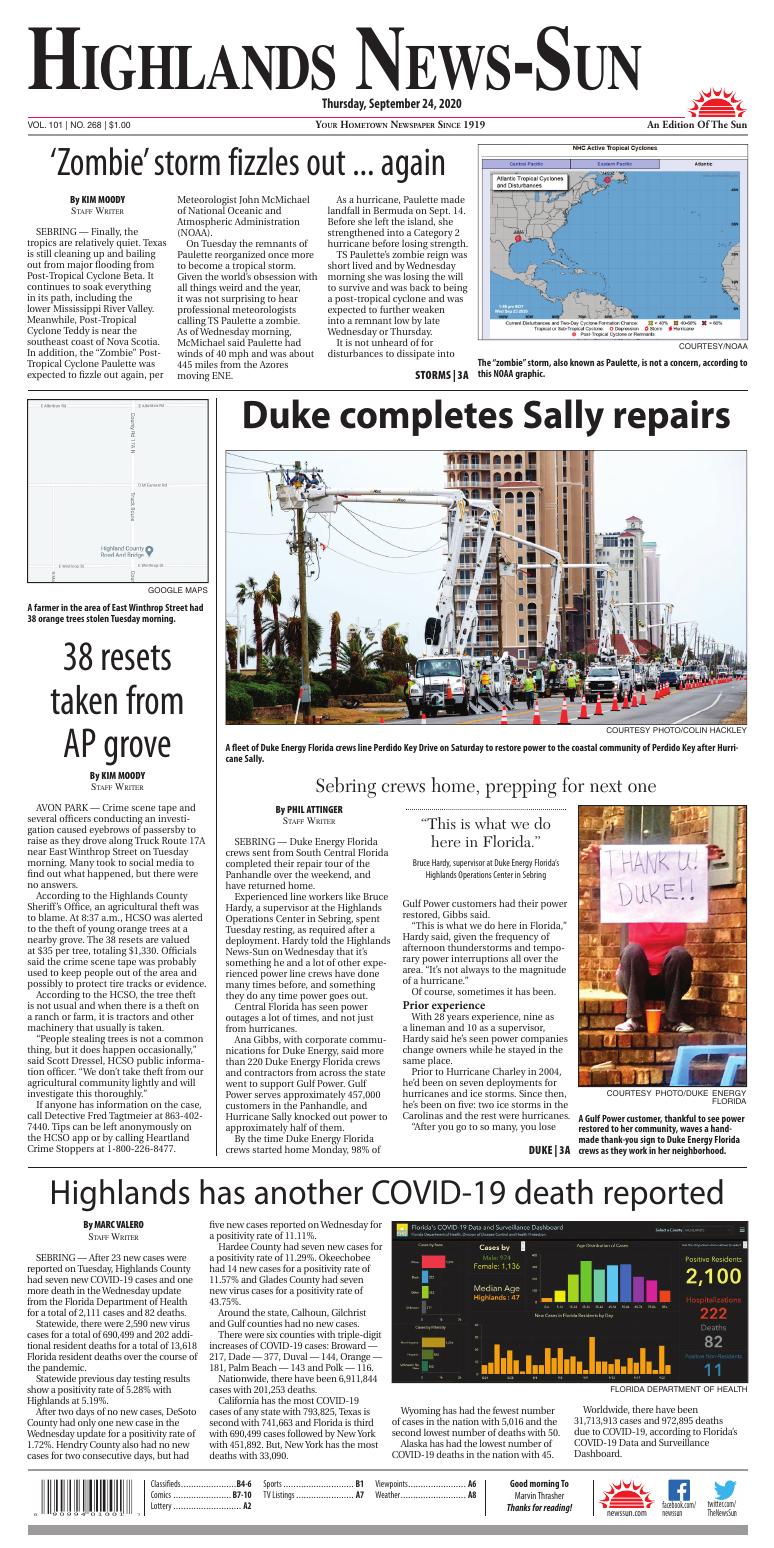 The “zombie” storm, also known as Paulette, is not a concern, according to this NOAA graphic.

SEBRING — Finally, the tropics are relatively quiet. Texas is still cleaning up and bailing out from major flooding from Post-Tropical Cyclone Beta. It continues to soak everything in its path, including the lower Mississippi River Valley. Meanwhile, Post-Tropical Cyclone Teddy is near the southeast coast of Nova Scotia. In addition, the “Zombie” Post-Tropical Cyclone Paulette was expected to fizzle out again, per Meteorologist John McMichael of National Oceanic and Atmospheric Administration (NOAA).

On Tuesday the remnants of Paulette reorganized once more to become a tropical storm. Given the world’s obsession with all things weird and the year, it was not surprising to hear professional meteorologists calling TS Paulette a zombie. As of Wednesday morning, McMichael said Paulette had winds of 40 mph and was about 445 miles from the Azores moving ENE.

As a hurricane, Paulette made landfall in Bermuda on Sept. 14. Before she left the island, she strengthened into a Category 2 hurricane before losing strength.

TS Paulette’s zombie reign was short lived and by Wednesday morning she was losing the will to survive and was back to being a post-tropical cyclone and was expected to further weaken into a remnant low by late Wednesday or Thursday.

It is not unheard of for disturbances to dissipate into near nothing and make a comeback. McMichael said storms can reemerge if the atmosphere is favorable for it. In other words, if the water temps are warm, no land to disrupt it, and no flow wind shear.

In 2020 fashion, we have zipped through all the names on the hurricane and have had to revert to the Greek alphabet, something that hasn’t happened since 2005. Unless you’re in a sorority/fraternity, it’s probably all Greek to you. So, we have provided the list below. Keep in mind that Alpha and Beta have already been used.

Highlands_news-sun
Duke completes Sally repairs; getting ready for the next one
By PHIL ATTINGER Staff Writer

A fleet of Duke Energy Florida crews line Perdido Key Drive on Saturday to restore power to the coastal community of Perdido Key after Hurricane Sally.

A Duke Energy Florida crew makes repairs to a line and transformer this past weekend in Pensacola, in the aftermath of Hurricane Sally. While deployed, Duke Energy crews work 16-hour days, sometimes starting before daylight or in this case past sunset to restore power.

Duke Energy Florida crews remove fallen and drooping branches from power lines and power easements before restoring lines and power in inland areas of the Panhandle after Hurricane Sally.

A Gulf Power customer, thankful to see power restored to her community, waves a handmade thank-you sign to Duke Energy Florida crews as they work in her neighborhood.

SEBRING — Duke Energy Florida crews sent from South Central Florida completed their repair tour of the Panhandle over the weekend, and have returned home.

Experienced line workers like Bruce Hardy, a supervisor at the Highlands Operations Center in Sebring, spent Tuesday resting, as required after a deployment. Hardy told the Highlands News-Sun on Wednesday that it’s something he and a lot of other experienced power line crews have done many times before, and something they do any time power goes out.

Central Florida has seen power outages a lot of times, and not just from hurricanes.

Ana Gibbs, with corporate communications for Duke Energy, said more than 220 Duke Energy Florida crews and contractors from across the state went to support Gulf Power. Gulf Power serves approximately 457,000 customers in the Panhandle, and Hurricane Sally knocked out power to approximately half of them.

“This is what we do here in Florida,” Hardy said, given the frequency of afternoon thunderstorms and temporary power interruptions all over the area. “It’s not always to the magnitude of a hurricane.”

Of course, sometimes it has been.

With 28 years experience, nine as a lineman and 10 as a supervisor, Hardy said he’s seen power companies change owners while he stayed in the same place.

Prior to Hurricane Charley in 2004, he’d been on seven deployments for hurricanes and ice storms. Since then, he’s been on five: two ice storms in the Carolinas and the rest were hurricanes.

“After you go to so many, you lose the name of the hurricane that came through,” Hardy said.

The names matter less than the repairs, especially for the Carolinas, which see both hurricanes and ice storms each year.

The rough seasons have “seasoned” Central Florida crews, he said, especially 2004 with four landfalls in the service area.

The last few years have been busy, too, with Hurricanes Irma in 2017, Hermine in 2018 and Michael last year.

“Michael did a number in the Panhandle,” Hardy said.

This time, he went to Pensacola where Duke Energy crews helped Gulf Power restore its lines.

“Once you are selected to go, your mind starts to acclimate to the conditions,” Hardy said.

The first challenge is getting to and around the affected area safely, he said.

“The biggest thing for us is driving. We have to get to where we’re going to work,” Hardy said.

In Pensacola itself, it was mostly pole and tree damage, Hardy said. By contrast, beach and barrier islands had sand and boats piled where they shouldn’t be, especially over roads.

Despite word from the area about loose barges, Hardy said he didn’t see them.

His crews felt the effects of them, though, with Three-Mile Bridge out, they had a longer drive between their hotels and their work sites. Hurricane repair and recovery also means long hours, hot weather and reduced sleep with increased attention to safety for all of those reasons.

“Pretty much anybody that goes knows how it is,” Hardy said. Crews have to keep themselves and their customers safe.

Before leaving, crews review their protocols, Hardy said, to wear rubber gloves, ground all systems and isolate themselves from dangers.

“Back in 2004, very few people had generators,” Hardy said. “Now that is a common item on every storm.”

If not properly connected to a home breaker box, that generator can backfeed the lines. Line crews will check for voltage, ground lines and even pull meters, if needed, to protect themselves and their customers.

In some cases, Hardy said, a line might be dead on one side of a break, but might be energized on the other side.

And there are a lot of “tree issues,” he said. Many broken limbs don’t fall to the ground, or are knocked loose after the fact, a week or two later, by more wind. Crews need to be sure no broken limbs come down on anyone and no weakened trees will fall on lines again.

“A lot of times we’re dealing with unnecessary traffic because of people [out] looking at damage,” Hardy said.

Crews have to wear traffic vests, set up cones, turn on all emergency lights and hope everyone pays attention.

Hardy said he’s “never had a bad meal” on deployment, thanks to the catering by the company. Residents help with that, too.

“They were very, very glad to see us,” Hardy said of residents. “I don’t know how many snacks and drinks we were offered. They would stop to thank us for coming to help.”

While most of the truck crews will see that first-hand out in front of customers’ homes, he saw it himself in a parking lot near a restaurant without power.

The father and son owners had done the best they could to keep their food cold. It was edible, but under law, without active refrigeration, they couldn’t sell it. The son had suggested they see if the powerline workers would like to have some orange juice, and served it to them.

“[I] told them ‘thank you’ for thinking about us,” Hardy said. “That’s the one I remember that happened Saturday.”

Line crews work in zones in Florida. Sebring is the South Central Zone, which sent nine trucks to the Panhandle: one from Sebring and four each from Lake Wales and Lake Buena Vista.

Officials in the zone have to be careful not to impact the customers at home by sending off too many resources. Hardy said. The number of trucks deployed are the number they can spare.

Meanwhile, Florida line crews train for hurricanes every day, with every daily call.

“We have a lot of afternoon thunderstorms that keep us sharp on our safety practices,” Hardy said. “Our rules on how we work safely never changes.”

“They truly are our heroes,” Gibbs said. “They work 24/7 both at home or on deployment — often in the worst weather — leaving behind their families to restore power for complete strangers.”

“This is what we do here in Florida."

SEBRING — After 23 new cases were reported on Tuesday, Highlands County had seven new COVID-19 cases and one more death in the Wednesday update from the Florida Department of Health for a total of 2,111 cases and 82 deaths.

Statewide previous day testing results show a positivity rate of 5.28% with Highlands at 5.19%.

Around the state, Calhoun, Gilchrist and Gulf counties had no new cases.

Alaska has had the lowest number of COVID-19 deaths in the nation with 45.

A farmer in the area of East Winthrop Street had 38 orange trees stolen Tuesday morning.

AVON PARK — Crime scene tape and several officers conducting an investigation caused eyebrows of passersby to raise as they drove along Truck Route 17A near East Winthrop Street on Tuesday morning. Many took to social media to find out what happened, but there were no answers.

According to the Highlands County Sheriff’s Office, an agricultural theft was to blame. At 8:37 a.m., HCSO was alerted to the theft of young orange trees at a nearby grove. The 38 resets are valued at $35 per tree, totaling $1,330. Officials said the crime scene tape was probably used to keep people out of the area and possibly to protect tire tracks or evidence.

According to the HCSO, the tree theft is not usual and when there is a theft on a ranch or farm, it is tractors and other machinery that usually is taken.

“People stealing trees is not a common thing, but it does happen occasionally,” said Scott Dressel, HCSO public information officer. “We don’t take theft from our agricultural community lightly and will investigate this thoroughly.” 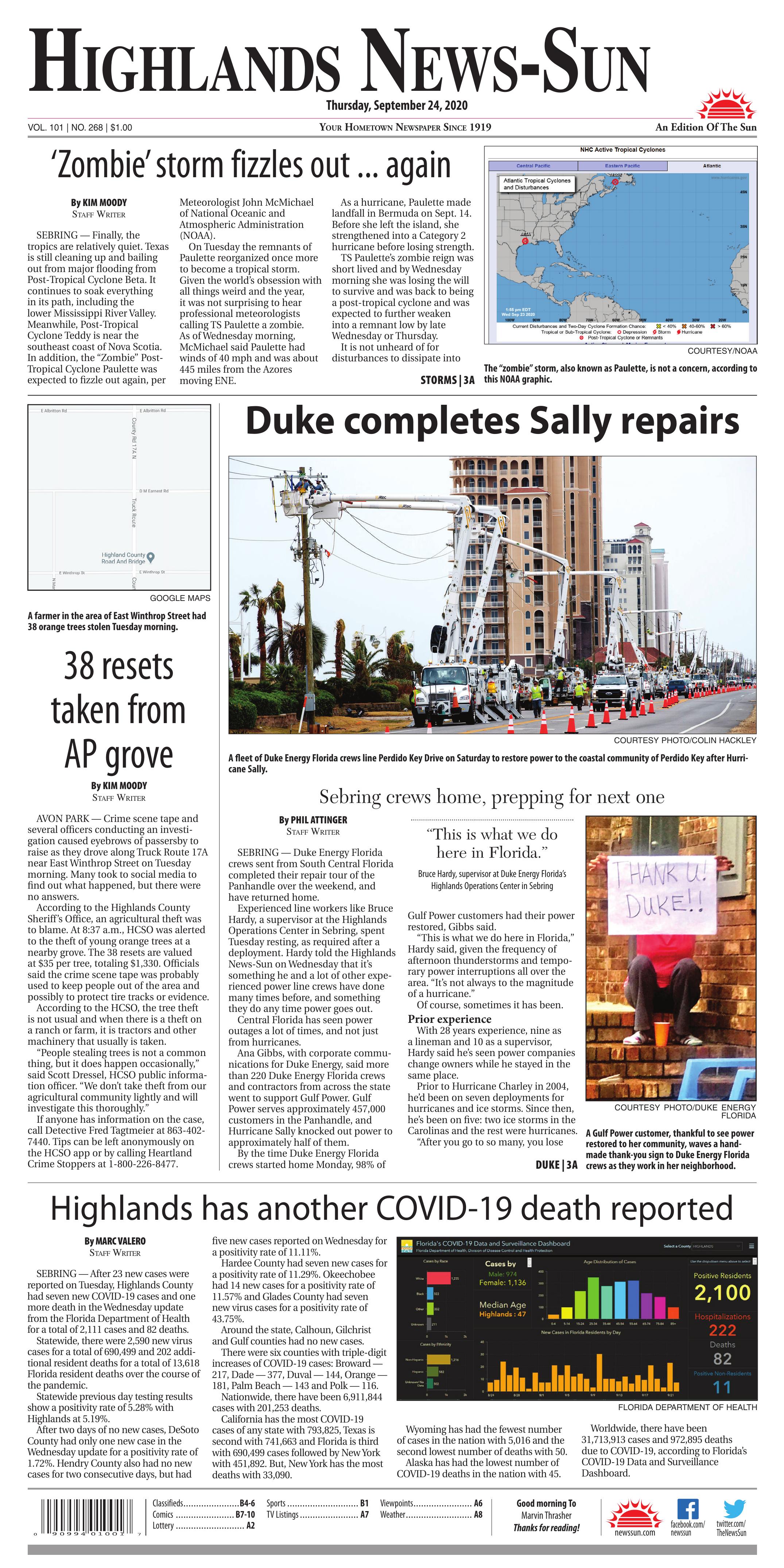