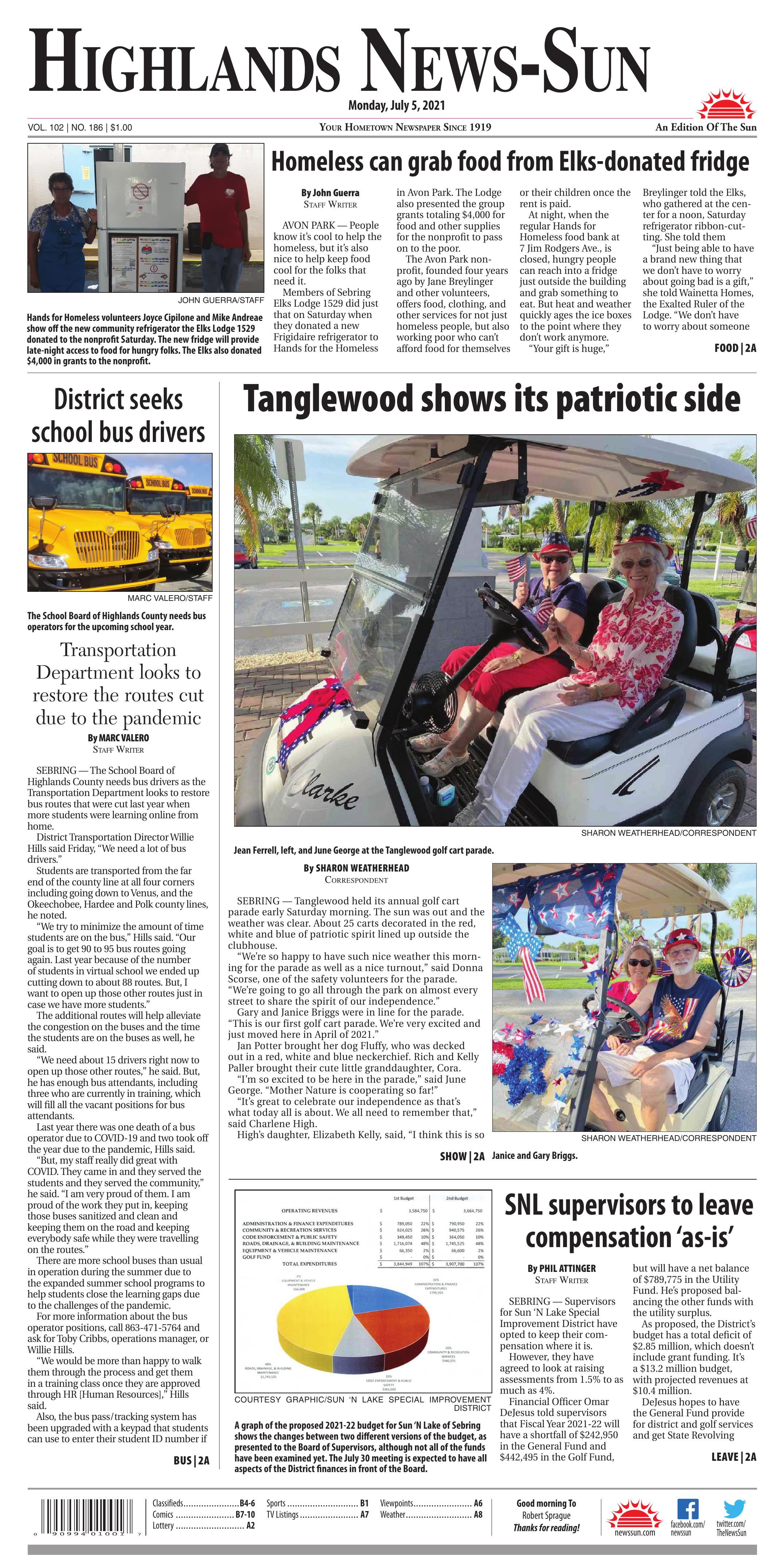 Hands for Homeless volunteers Joyce Cipilone and Mike Andreae show off the new community refrigerator the Elks Lodge 1529 donated to the nonprofit Saturday. The new fridge will provide late-night access to food for hungry folks. The Elks also donated $4,000 in grants to the nonprofit.

AVON PARK — People know it’s cool to help the homeless, but it’s also nice to help keep food cool for the folks that need it.

Members of Sebring Elks Lodge 1529 did just that on Saturday when they donated a new Frigidaire refrigerator to Hands for the Homeless in Avon Park. The Lodge also presented the group grants totaling $4,000 for food and other supplies for the nonprofit to pass on to the poor.

The Avon Park nonprofit, founded four years ago by Jane Breylinger and other volunteers, offers food, clothing, and other services for not just homeless people, but also working poor who can’t afford food for themselves or their children once the rent is paid.

At night, when the regular Hands for Homeless food bank at 7 Jim Rodgers Ave., is closed, hungry people can reach into a fridge just outside the building and grab something to eat. But heat and weather quickly ages the ice boxes to the point where they don’t work anymore.

“Your gift is huge,” Breylinger told the Elks, who gathered at the center for a noon, Saturday refrigerator ribbon-cutting. She told them

Homes and fellow Elk and former exalted ruler of the Lodge, Ronna Mason, said feeding the hungry is a national goal of the Elks.

“Since our inception in 1927, Sebring Elks has given $8.4 million to the community of Highlands County,” Mason said. “We raise money through our charity bingo on Sunday nights, and other fundraisers, like our golf tournament.”

Jacob Lyons, a chef who volunteers with Hands for Homeless, founded Glory Mission several years ago. He told the Elks at the presentation that he feeds the homeless to honor his grandmother, who died several years ago.

“We are going to make the most of your grants to help the most people we can,” he said.

SEBRING — Tanglewood held its annual golf cart parade early Saturday morning. The sun was out and the weather was clear. About 25 carts decorated in the red, white and blue of patriotic spirit lined up outside the clubhouse.

“We’re so happy to have such nice weather this morning for the parade as well as a nice turnout,” said Donna Scorse, one of the safety volunteers for the parade. “We’re going to go all through the park on almost every street to share the spirit of our independence.”

Gary and Janice Briggs were in line for the parade. “This is our first golf cart parade. We’re very excited and just moved here in April of 2021.”

Jan Potter brought her dog Fluffy, who was decked out in a red, white and blue neckerchief. Rich and Kelly Paller brought their cute little granddaughter, Cora.

“I’m so excited to be here in the parade,” said June George. “Mother Nature is cooperating so far!”

“It’s great to celebrate our independence as that’s what today all is about. We all need to remember that,” said Charlene High.

High’s daughter, Elizabeth Kelly, said, “I think this is so fun and really cool!”

Len and Karen Lewandowski both said they were excited to be here, having a lot of fun.

Mary Lee Napier and Mitzi Case had the place of honor as the lead cart. At 9 a.m. sharp the carts were ready to go, spreading cheer and patriotic spirit throughout the park.

A graph of the proposed 2021-22 budget for Sun ‘N Lake of Sebring shows the changes between two different versions of the budget, as presented to the Board of Supervisors, although not all of the funds have been examined yet. The July 30 meeting is expected to have all aspects of the District finances in front of the Board.

SEBRING — Supervisors for Sun ‘N Lake Special Improvement District have opted to keep their compensation where it is.

However, they have agreed to look at raising assessments from 1.5% to as much as 4%.

Financial Officer Omar DeJesus told supervisors that Fiscal Year 2021-22 will have a shortfall of $242,950 in the General Fund and $442,495 in the Golf Fund, but will have a net balance of $789,775 in the Utility Fund. He’s proposed balancing the other funds with the utility surplus.

As proposed, the District’s budget has a total deficit of $2.85 million, which doesn’t include grant funding. It’s a $13.2 million budget, with projected revenues at $10.4 million.

DeJesus hopes to have the General Fund provide for district and golf services and get State Revolving Fund low-interest long-term loans to pay for new water meters. The District has $10 million in the 5-year capital plan to improve the wastewater treatment plant,and the only capital improvement not yet covered is drainage.

Supervisor Raymond Brooks made it clear at the workshop that he doesn’t want to formally apply for any loans until District staff provides a plan for spending the money.

When it came time to discuss supervisor compensation, Brooks argued that something is needed to improve interest in serving on the board. The workshop had four of the five supervisors. The late-Joe Branson’s seat is now filled by Supervisor Beverly Phillips. However, Supervisor Neal Hotelling has been absent from the last two meetings.

General Manager Dan Stegall told the Highlands News-Sun on Friday that Hotelling is expected to be back for the July 30 meeting, but is out of state doing research for his employer. He’s expected to be available for votes on the budget in August and September meetings.

Potential supervisor compensation, as presented by DeJesus, was an increase from $300 to $500 a month, with a $12,000 impact on the annual budget, or up to $1,000 a month, with a $42,000 impact. There was also discussion of a free golf membership as one of the perks. Any such changes would have to go to the Highlands County Board of County Commissioners for approval.

In a letter to the Board, Sun ‘N Lake resident David Halbig didn’t think much of giving a free golf membership.

”Let me assure everyone that to add free golf memberships for Board members you will definitely create community interest. That is [a] special interest. A conflict of interest. And exploiting their interest for personal gain,” Halbig wrote.

He said a free golf membership is a $4,000 perk, and the Supervisors are responsible for running of the course. If a supervisor doesn’t golf, he said, that would equal another $4,000 to their annual compensation.

Gilpin disagreed with free golf memberships for board members, and Brooks disagreed with increasing compensation, but Brooks also asked General Manager Dan Stegall to evaluate how well board meetings function.

Halbig, at the workshop, proposed that employees receive bonuses versus wage increases, and also asked DeJesus if he accounted for new units and commercial construction in budget revenue.

Another major concern in the budget was what to do about the weight room at the Community Center, also called the “fitness center.” Community Services Director Ariel Fells said she’s met with AdventHealth Heartland about their health club project. The District could be a sponsor with residents getting discounts on membership.

Brooks said he would prefer residents get in for free, Stegall said a District sponsorship could save money, and supervisors as a whole agreed to keep their own fitness center open, for now.

Finally, Gilpin asked about the request for proposal (RFP) process, saying he disagreed with allowing a general manager to spend more than $50,000 without board approval. Stegall said the RFP process would take longer than just requiring the manager to get three quotes for an already-budgeted expense, project or program.

Phillips agreed, and Stegall said he would prepare a purchasing protocol amendment for the Board.

The School Board of Highlands County needs bus operators for the upcoming school year.

SEBRING — The School Board of Highlands County needs bus drivers as the Transportation Department looks to restore bus routes that were cut last year when more students were learning online from home.

Students are transported from the far end of the county line at all four corners including going down to Venus, and the Okeechobee, Hardee and Polk county lines, he noted.

“We try to minimize the amount of time students are on the bus,” Hills said. “Our goal is to get 90 to 95 bus routes going again. Last year because of the number of students in virtual school we ended up cutting down to about 88 routes. But, I want to open up those other routes just in case we have more students.”

The additional routes will help alleviate the congestion on the buses and the time the students are on the buses as well, he said.

“We need about 15 drivers right now to open up those other routes,” he said. But, he has enough bus attendants, including three who are currently in training, which will fill all the vacant positions for bus attendants.

Last year there was one death of a bus operator due to COVID-19 and two took off the year due to the pandemic, Hills said.

There are more school buses than usual in operation during the summer due to the expanded summer school programs to help students close the learning gaps due to the challenges of the pandemic.

For more information about the bus operator positions, call 863-471-5764 and ask for Toby Cribbs, operations manager, or Willie Hills.

“We would be more than happy to walk them through the process and get them in a training class once they are approved through HR [Human Resources],” Hills said.

Also, the bus pass/tracking system has been upgraded with a keypad that students can use to enter their student ID number if they lost or misplaced their bus pass/swipe card.

After a pilot program at the end of 2018-19 school year, in 2019-20 school year the district started using the Zonar system that tracks student bus ridership providing the Transportation Department with instant information on who is riding on schools buses and where and when they got on and off a bus.

Hills explained with the 2019-20 school year going online only at the end of the year due to the pandemic, they didn’t have a chance to collect the bus passes from students. For the 2020-21 school year they had to go through the process again of printing out and handing out the cards so the system was up and running around mid-year last school year.