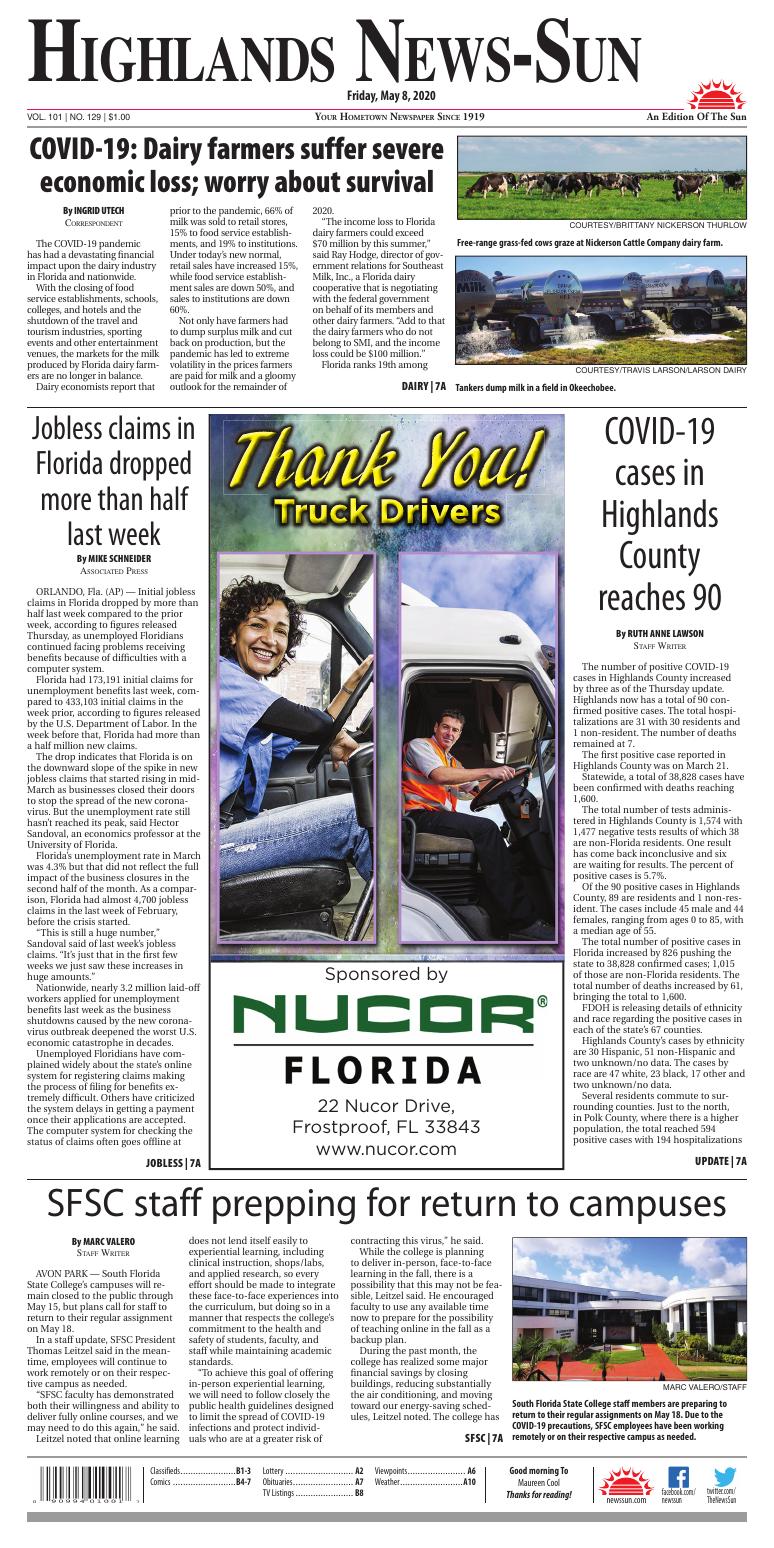 South Florida State College staff members are preparing to return to their regular assignments on May 18. Due to the COVID-19 precautions, SFSC employees have been working remotely or on their respective campus as needed.

AVON PARK — South Florida State College’s campuses will remain closed to the public through May 15, but plans call for staff to return to their regular assignment on May 18.

In a staff update, SFSC President Thomas Leitzel said in the meantime, employees will continue to work remotely or on their respective campus as needed.

“SFSC faculty has demonstrated both their willingness and ability to deliver fully online courses, and we may need to do this again,” he said.

Leitzel noted that online learning does not lend itself easily to experiential learning, including clinical instruction, shops/labs, and applied research, so every effort should be made to integrate these face-to-face experiences into the curriculum, but doing so in a manner that respects the college’s commitment to the health and safety of students, faculty, and staff while maintaining academic standards.

“To achieve this goal of offering in-person experiential learning, we will need to follow closely the public health guidelines designed to limit the spread of COVID-19 infections and protect individuals who are at a greater risk of contracting this virus,” he said.

While the college is planning to deliver in-person, face-to-face learning in the fall, there is a possibility that this may not be feasible, Leitzel said. He encouraged faculty to use any available time now to prepare for the possibility of teaching online in the fall as a backup plan.

During the past month, the college has realized some major financial savings by closing buildings, reducing substantially the air conditioning, and moving toward our energy-saving schedules, Leitzel noted. The college has limited non-essential expenses and only filled vacant positions that are deemed critical.

The college expects there will be a need to consider budget cuts in the 2021 fiscal year, he said.

“We are extremely grateful for the financial assistance received from the federal government through the CARES Act,” he said.

SFSC received a little over $2 million. Half of this amount must be used for direct student support, and the balance will be used primarily to address current expenses incurred through the COVID-19 crisis.

Cows in the milking parlor at Nickerson Cattle Company’s dairy.

Bulk milk storage tanks keep milk cold until it can be picked up by a milk hauler.

Tankers dump milk in a field in Okeechobee.

The COVID-19 pandemic has had a devastating financial impact upon the dairy industry in Florida and nationwide.

With the closing of food service establishments, schools, colleges, and hotels and the shutdown of the travel and tourism industries, sporting events and other entertainment venues, the markets for the milk produced by Florida dairy farmers are no longer in balance.

Not only have farmers had to dump surplus milk and cut back on production, but the pandemic has led to extreme volatility in the prices farmers are paid for milk and a gloomy outlook for the remainder of 2020.

Florida ranks 19th among the states in terms of dairy production. It is a fluid milk state. Most of the milk produced goes into drinkable milk in various container sizes. Florida does very little manufacturing of dairy products like cheese, butter, yogurt, or ice cream.

The SMI dairy cooperative, which was formed in 1998, has approximately 130 farmer members across six states in the Southeast. Herds range in size from under 100 to several thousand. Forty percent are Florida dairy farmers. They account for 85% of SMI’s milk production.

Besides Florida dairy farmers who are SMI members, there are 12 other independent dairy farms in the state.

Florida dairy farmers have been struggling to survive for some years now.

Farmers face high production costs, a growing number of regulations, and other day-to-day challenges, like the hot climate during the summer months, which can cut down on the amount of milk cows produce,” Hodge said.

While the demand for manufactured dairy products remains high, consumers aren’t drinking as much milk as they have in the past.

The largest factor contributing to the loss of farms is the low price farmers receive for their milk, according to Travis Senn, SMI marketing research and communications specialist.

Minimum prices for payments to farmers are set by complicated USDA formulas that take into account the price of powdered milk, cheese, butter, and whey. The formula also considers the region of the country and what the milk is being used to produce.

Milk handlers do pay over-order premiums to farmers and co-ops to compensate them for additional expenses not taken into account by the USDA, such as hauling milk, laboratory testing, and balancing the market. Despite that, “milk prices have been in the gutter now for the better part of five years,” Senn said.

“Dairy farmers were optimistic about higher prices this year, but the pandemic eroded that possibility,” Senn added.

As a result of COVID-19, Florida Governor Ron DeSantis ordered schools to close beginning March 16. Soon thereafter, he issued another order closing all non-essential businesses, including restaurants and coffee shops. Both are large purchasers of milk.

To make matters worse, spring is the time of year when cows produce the most milk, so there is generally more milk than what the fluid market can consume. Second, most cows need to be milked two to there times a day, whether there are buyers or not. Third, fluid milk is a perishable commodity; it must be refrigerated.

Initially, farmers had no choice but to dump a massive amount of milk. During the first nine days of April, 314 tanker loads of milk were dumped by SMI’s farmers for a loss of $1,570,000.” Hodge said.

The dumping created panic buying for milk at grocery stores and convenience stores. That worked to the dairy farmers’ benefit for about a week, until the grocery stores started limiting the purchase of milk to one or two gallons per customer. Those limits have now been lifted.

To prevent further dumping, SMI and its members worked out an emergency production reduction agreement. SMI would pay members on 90 percent of their baseline production from March for the foreseeable future.

“It was the responsible thing to do to help balance the market, but it’s difficult for us to lose that extra income, especially when we still have certain fixed costs,” said Gary Keyes, who is a partner of Milk-A-Way Dairy Farm in Webster and K&H in Mayo.

“One way to scale back production,” Brittany Thurlow, SMI board member and Nickerson Cattle Company partner, explained, ‘is to change the cows’ diet, so they give less milk. We can also go from two milkings per day to one per day on late lactation cows. As a last resort, we can cull cattle to go to beef.”

By cutting back production, SMI is trying to do its part to prevent further losses. But it needs the assistance of the private sector and more importantly, the federal government, if dairy farms are to survive. That is the subject of a second article to be published tomorrow.

In this, Wednesday, May 6, 2020 photo, a now hiring sign is displayed on a street corner in North Miami Beach, Fla. Initial jobless claims in Florida dropped by more than half last week compared to the prior week, according to figures released Thursday, as unemployed Floridians continued facing problems signing up and receiving benefits because of difficulties with a computer system.

ORLANDO, Fla. (AP) — Initial jobless claims in Florida dropped by more than half last week compared to the prior week, according to figures released Thursday, as unemployed Floridians continued facing problems receiving benefits because of difficulties with a computer system.

Florida had 173,191 initial claims for unemployment benefits last week, compared to 433,103 initial claims in the week prior, according to figures released by the U.S. Department of Labor. In the week before that, Florida had more than a half million new claims.

The drop indicates that Florida is on the downward slope of the spike in new jobless claims that started rising in mid-March as businesses closed their doors to stop the spread of the new coronavirus. But the unemployment rate still hasn’t reached its peak, said Hector Sandoval, an economics professor at the University of Florida.

Florida’s unemployment rate in March was 4.3% but that did not reflect the full impact of the business closures in the second half of the month. As a comparison, Florida had almost 4,700 jobless claims in the last week of February, before the crisis started.

“This is still a huge number,” Sandoval said of last week’s jobless claims. “It’s just that in the first few weeks we just saw these increases in huge amounts.”

Unemployed Floridians have complained widely about the state’s online system for registering claims making the process of filing for benefits extremely difficult. Others have criticized the system delays in getting a payment once their applications are accepted. The computer system for checking the status of claims often goes offline at night and on weekends.

A class-action negligence lawsuit brought by Florida residents who were unable to get their jobless benefits was dismissed Wednesday. Judge Angela Demsey in Leon County said the unemployed workers did not meet a legal standard for seeking an order to get the payments.

“The system design and/or implementation is a failure,” the lawsuit said.

Before the coronavirus crisis, Florida had more than 10 million civilian workers in its labor force.

More than 1.8 million Floridians have submitted unemployment claims since mid-March, when businesses started shutting down around the state because of the spread of the virus. Because of the difficulties in signing up for the benefits, many have submitted two or three claims, according to the Florida Department of Economic Opportunity.

The agency says more than 1.1 million claims have been confirmed, and of that number almost 481,500 claimants, or 43%, have been paid more than $1 billion, as of Tuesday.

Florida, with the fourth biggest economy in the U.S., will take some time to recover from the economic damage, according to a forecast released this week.

The value of goods produced and services provided in Florida will shrink 5.2% in 2020, and it won’t reach pre-pandemic levels until the third quarter of 2021, according to the forecast from the Institute for Economic Forecasting at the University of Central Florida.

A breakdown of the positive cases of coronavirus in Highlands County as of the Thursday update from the Florida Department of Health.

The number of positive COVID-19 cases in Highlands County increased by three as of the Thursday update. Highlands now has a total of 90 confirmed positive cases. The total hospitalizations are 31 with 30 residents and 1 non-resident. The number of deaths remained at 7.

The total number of tests administered in Highlands County is 1,574 with 1,477 negative tests results of which 38 are non-Florida residents. One result has come back inconclusive and six are waiting for results. The percent of positive cases is 5.7%.

Several residents commute to surrounding counties. Just to the north, in Polk County, where there is a higher population, the total reached 594 positive cases with 194 hospitalizations and 30 deaths. Polk has also administered 9,412 tests, of which 8,810 have come back with negative results.

Miami-Dade continues to lead the state in positive cases with 13,585 confirmed and 454 deaths. 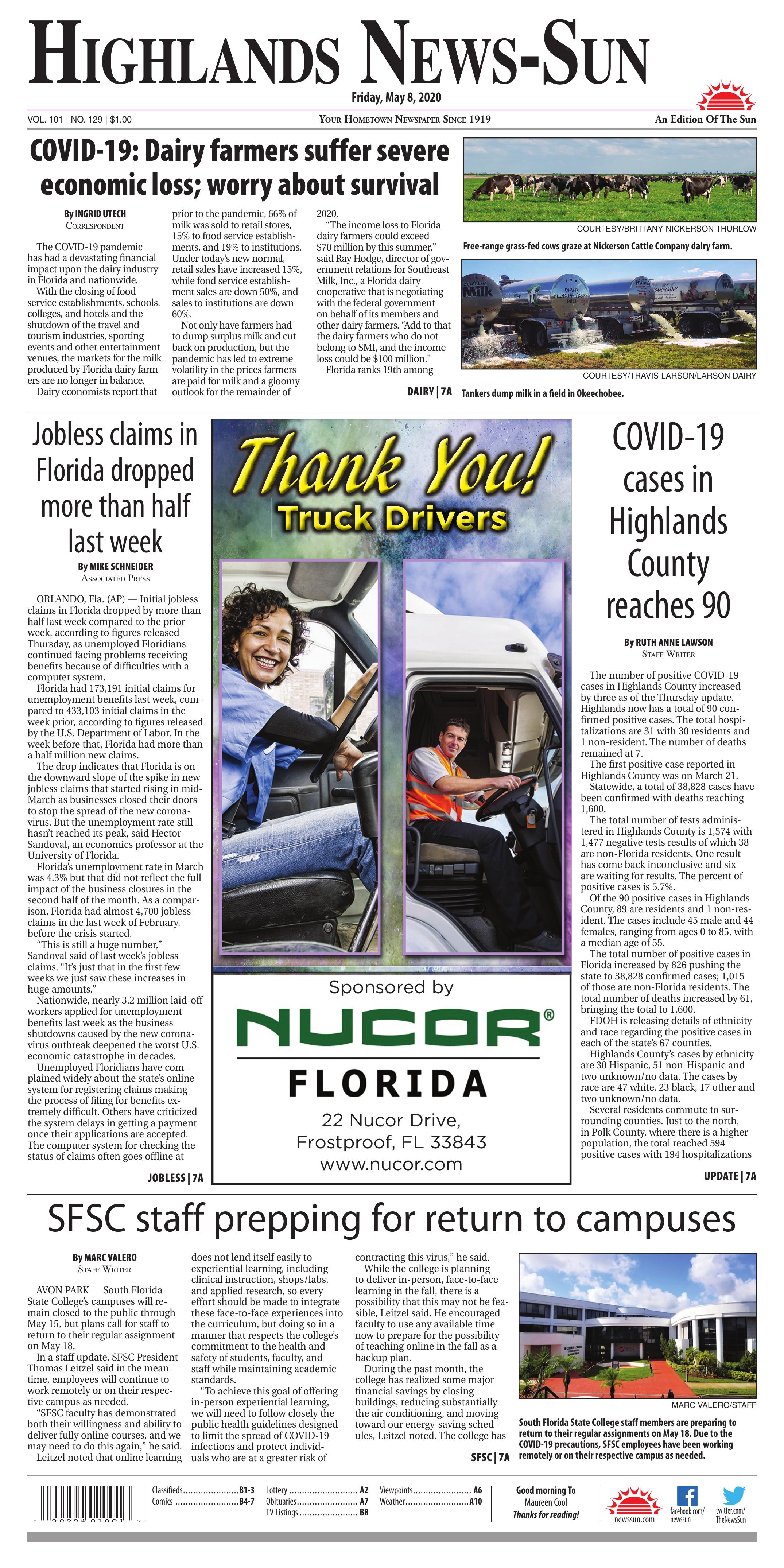