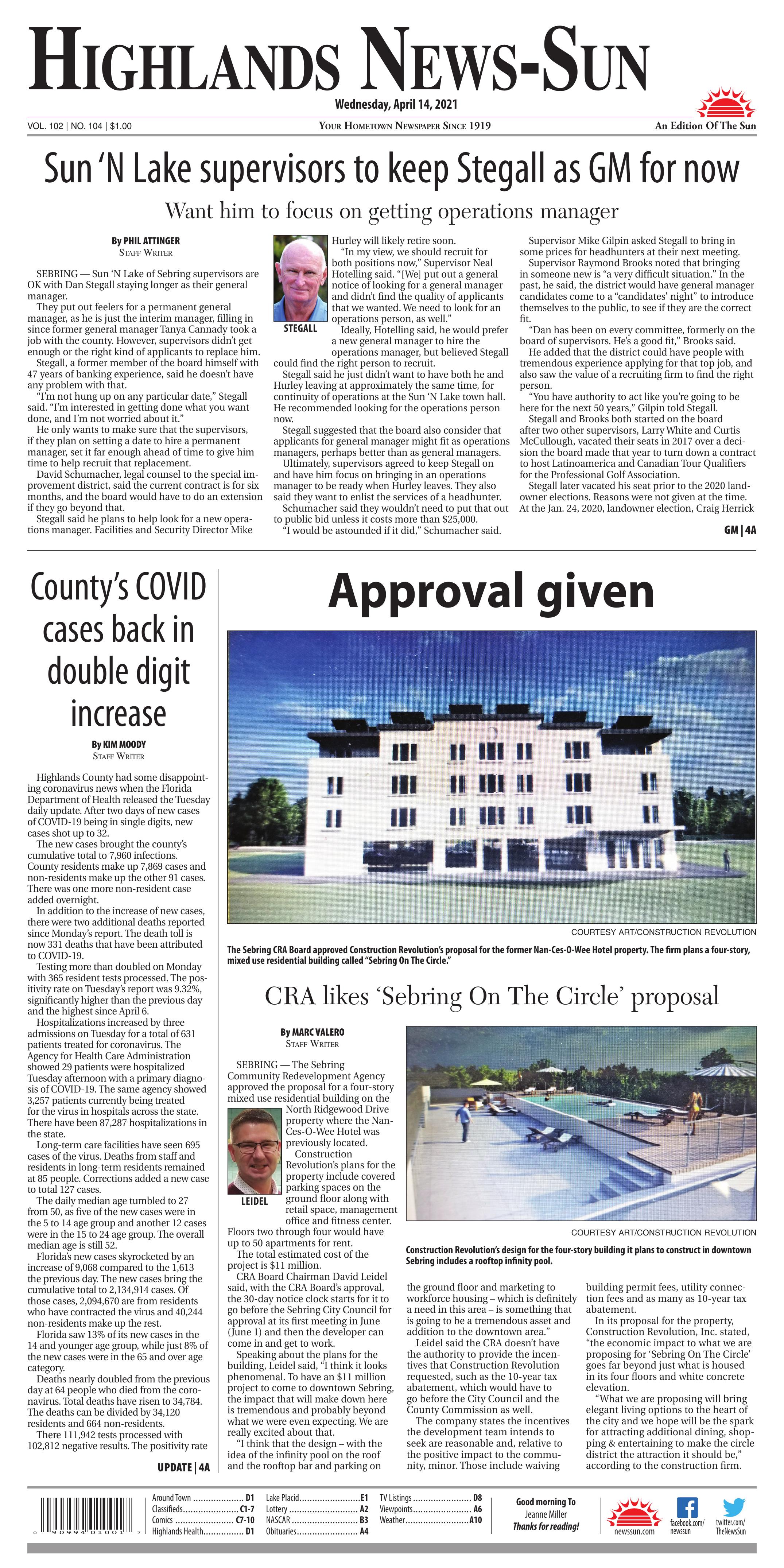 Highlands_news-sun
Supervisors to keep Stegall as GM for now

They put out feelers for a permanent general manager, as he is just the interim manager, filling in since former general manager Tanya Cannady took a job with the county. However, supervisors didn’t get enough or the right kind of applicants to replace him.

Stegall, a former member of the board himself with 47 years of banking experience, said he doesn’t have any problem with that.

“I’m not hung up on any particular date,” Stegall said. “I’m interested in getting done what you want done, and I’m not worried about it.”

He only wants to make sure that the supervisors, if they plan on setting a date to hire a permanent manager, set it far enough ahead of time to give him time to help recruit that replacement.

David Schumacher, legal counsel to the special improvement district, said the current contract is for six months, and the board would have to do an extension if they go beyond that.

“In my view, we should recruit for both positions now,” Supervisor Neal Hotelling said. “[We] put out a general notice of looking for a general manager and didn’t find the quality of applicants that we wanted. We need to look for an operations person, as well.”

Ideally, Hotelling said, he would prefer a new general manager to hire the operations manager, but believed Stegall could find the right person to recruit.

Stegall said he just didn’t want to have both he and Hurley leaving at approximately the same time, for continuity of operations at the Sun ‘N Lake town hall. He recommended looking for the operations person now.

Stegall suggested that the board also consider that applicants for general manager might fit as operations managers, perhaps better than as general managers.

Ultimately, supervisors agreed to keep Stegall on and have him focus on bringing in an operations manager to be ready when Hurley leaves. They also said they want to enlist the services of a headhunter.

Schumacher said they wouldn’t need to put that out to public bid unless it costs more than $25,000.

“I would be astounded if it did,” Schumacher said.

Supervisor Mike Gilpin asked Stegall to bring in some prices for headhunters at their next meeting.

Supervisor Raymond Brooks noted that bringing in someone new is “a very difficult situation.” In the past, he said, the district would have general manager candidates come to a “candidates’ night” to introduce themselves to the public, to see if they are the correct fit.

“Dan has been on every committee, formerly on the board of supervisors. He’s a good fit,” Brooks said.

He added that the district could have people with tremendous experience applying for that top job, and also saw the value of a recruiting firm to find the right person.

“You have authority to act like you’re going to be here for the next 50 years,” Gilpin told Stegall.

Stegall and Brooks both started on the board after two other supervisors, Larry White and Curtis McCullough, vacated their seats in 2017 over a decision the board made that year to turn down a contract to host Latinoamerica and Canadian Tour Qualifiers for the Professional Golf Association.

Recently, another vacant seat has been filled by a member of the community due to the untimely death of Joseph Ackroyd “Joe” Branson, who served as a supervisor of Sun ‘N Lake Special Improvement District the last three-and-a-half years. He died in February at age 74.

The Sebring CRA Board approved Construction Revolution’s proposal for the former Nan-Ces-O-Wee Hotel property. The firm plans a four-story, mixed use residential building called “Sebring On The Circle.”

Construction Revolution’s design for the four-story building it plans to construct in downtown Sebring includes a rooftop infinity pool.

SEBRING — The Sebring Community Redevelopment Agency approved the proposal for a four-story mixed use residential building on the North Ridgewood Drive property where the Nan-Ces-O-Wee Hotel was previously located.

Construction Revolution's plans for the property include covered parking spaces on the ground floor along with retail space, management office and fitness center. Floors two through four would have up to 50 apartments for rent.

The total estimated cost of the project is $11 million.

CRA Board Chairman David Leidel said, with the CRA Board's approval, the 30-day notice clock starts for it to go before the Sebring City Council for approval at its first meeting in June (June 1) and then the developer can come in and get to work.

Speaking about the plans for the building, Leidel said, "I think it looks phenomenal. To have an $11 million project to come to downtown Sebring, the impact that will make down here is tremendous and probably beyond what we were even expecting. We are really excited about that.

"I think that the design – with the idea of the infinity pool on the roof and the rooftop bar and parking on the ground floor and marketing to workforce housing – which is definitely a need in this area – is something that is going to be a tremendous asset and addition to the downtown area."

Leidel said the CRA doesn't have the authority to provide the incentives that Construction Revolution requested, such as the 10-year tax abatement, which would have to go before the City Council and the County Commission as well.

The company states the incentives the development team intends to seek are reasonable and, relative to the positive impact to the community, minor. Those include waiving building permit fees, utility connection fees and as many as 10-year tax abatement.

In its proposal for the property, Construction Revolution, Inc. stated, "the economic impact to what we are proposing for 'Sebring On The Circle' goes far beyond just what is housed in its four floors and white concrete elevation.

"What we are proposing will bring elegant living options to the heart of the city and we hope will be the spark for attracting additional dining, shopping & entertaining to make the circle district the attraction it should be," according to the construction firm.

Highlands County had some disappointing coronavirus news when the Florida Department of Health released the Tuesday daily update. After two days of new cases of COVID-19 being in single digits, new cases shot up to 32.

In addition to the increase of new cases, there were two additional deaths reported since Monday’s report. The death toll is now 331 deaths that have been attributed to COVID-19.

Testing more than doubled on Monday with 365 resident tests processed. The positivity rate on Tuesday’s report was 9.32%, significantly higher than the previous day and the highest since April 6.

Hospitalizations increased by three admissions on Tuesday for a total of 631 patients treated for coronavirus. The Agency for Health Care Administration showed 29 patients were hospitalized Tuesday afternoon with a primary diagnosis of COVID-19. The same agency showed 3,257 patients currently being treated for the virus in hospitals across the state. There have been 87,287 hospitalizations in the state.

Long-term care facilities have seen 695 cases of the virus. Deaths from staff and residents in long-term residents remained at 85 people. Corrections added a new case to total 127 cases.

Florida saw 13% of its new cases in the 14 and younger age group, while just 8% of the new cases were in the 65 and over age category.

Deaths nearly doubled from the previous day at 64 people who died from the coronavirus. Total deaths have risen to 34,784. The deaths can be divided by 34,120 residents and 664 non-residents.

Current hospitalizations climbed back past the 40,000 mark, with 40,098 hospitalized. The seven-day average of 39,536 is 10% higher than numbers seen two weeks ago.

According to the Johns Hopkins University Center for Systems Science and Engineering reported the U.S. with a total of 31.3 million cases and 563,027 deaths.

Globally, there have been 137 million cases and 2.95 million deaths.