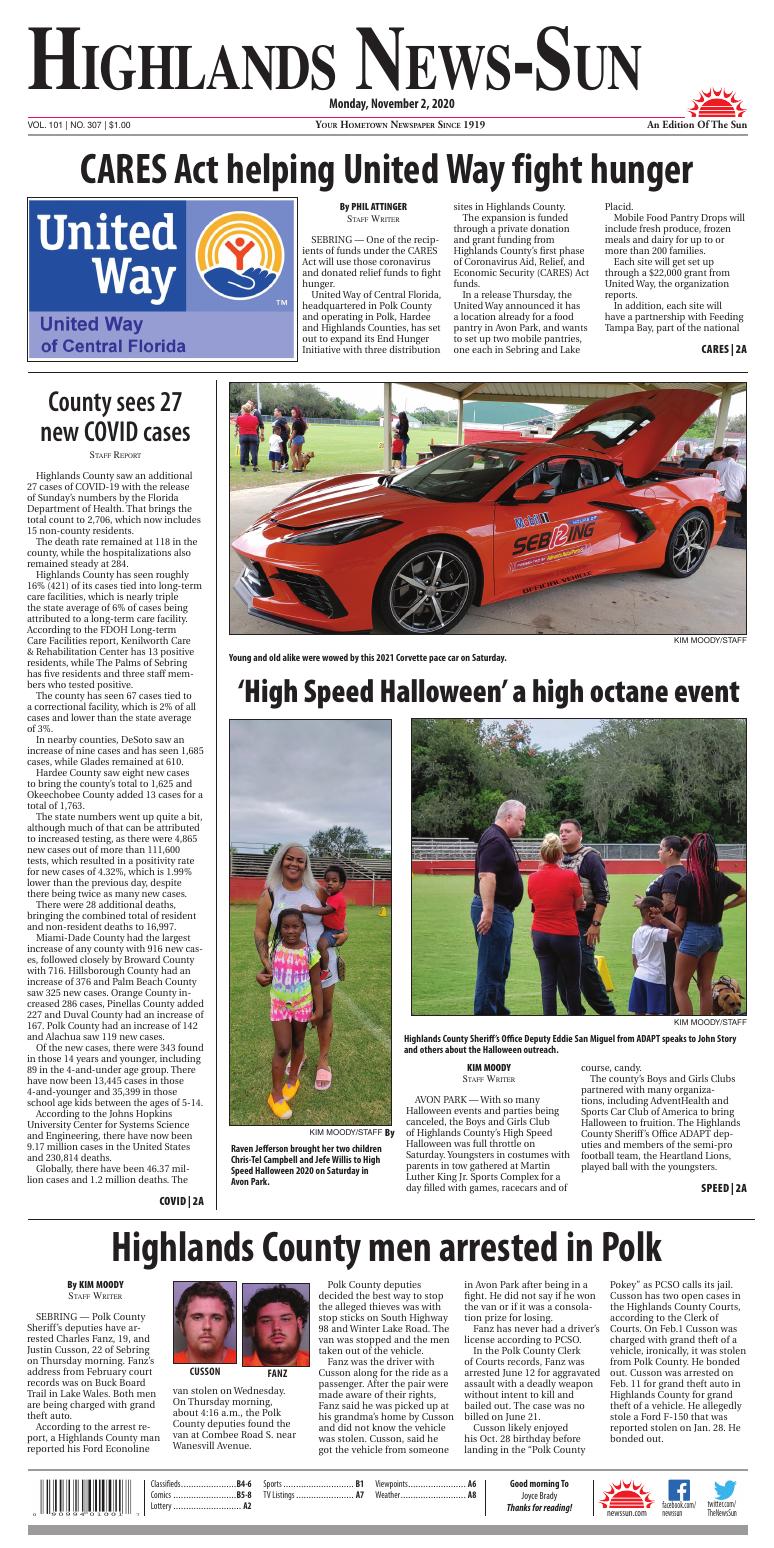 SEBRING — One of the recipients of funds under the CARES Act will use those coronavirus and donated relief funds to fight hunger.

United Way of Central Florida, headquartered in Polk County and operating in Polk, Hardee and Highlands Counties, has set out to expand its End Hunger Initiative with three distribution sites in Highlands County.

The expansion is funded through a private donation and grant funding from Highlands County’s first phase of Coronavirus Aid, Relief, and Economic Security (CARES) Act funds.

In a release Thursday, the United Way announced it has a location already for a food pantry in Avon Park, and wants to set up two mobile pantries, one each in Sebring and Lake Placid.

Mobile Food Pantry Drops will include fresh produce, frozen meals and dairy for up to or more than 200 families.

Each site will get set up through a $22,000 grant from United Way, the organization reports.

In addition, each site will have a partnership with Feeding Tampa Bay, part of the national Feeding America network that focuses on providing food to hundreds of thousands of food insecure families in the 10-county area of West Central Florida.

United Way reports that, for each $22,000 mobile feeding unit grant, $18,000 will go to Feeding Tampa Bay to cover the cost of food and transportation while the remaining $4,000 will cover administration, marketing and training.

United Way reports that this will help the organization provide holistic services that address the root cause of critical needs.

It may also provide an opportunity to identify families in the community who need access to financial education, health services and other educational opportunities in places where such services are limited.

Those wanting to apply to serve as mobile sites may download the Request For Proposals form at uwcf.org/united-way-seeking-end-hunger-sites-in-highlands-county and follow the guidelines to complete your application.

Applications are due by Friday, Nov. 13 via email to Rod.Crowley@uwcf.org.

Highlands County Sheriff’s Office Deputy Eddie San Miguel from ADAPT speaks to John Story and others about the Halloween outreach.

Teen volunteers from the Boys and Girls Clubs of Highlands County toss a football around at a community Halloween even on Saturday in Avon Park.

Young and old alike were wowed by this 2021 Corvette pace car on Saturday.

Highlands County Sheriff’s Office Sgt. Brett Hinkle said “go long” as he threw the ball in a friendly game of football on Saturday.

AVON PARK — With so many Halloween events and parties being canceled, the Boys and Girls Club of Highlands County’s High Speed Halloween was full throttle on Saturday. Youngsters in costumes with parents in tow gathered at Martin Luther King Jr. Sports Complex for a day filled with games, racecars and of course, candy.

The county’s Boys and Girls Clubs partnered with many organizations, including AdventHealth and Sports Car Club of America to bring Halloween to fruition. The Highlands County Sheriff’s Office ADAPT deputies and members of the semi-pro football team, the Heartland Lions, played ball with the youngsters.

John Story, media relations for the Sebring International Raceway, was on hand to educate would-be racecar drivers. Sebring’s Sick Sideways race team brought the LMP3 car for kids to climb in and take pictures in. The Sebring orange 2021 Corvette pace car was on display as well.

“We are bringing awareness to the race track,” Dewberry said. “The races are soon. The Heartland Lions are here to have fun with the kids for Halloween. It’s a way to get the community involved and fun. The teenagers for the programs have given up their Halloween Saturday to volunteer and make sure this is safe and fun.”

Dewberry was glad to see so many deputies participating and interacting with the children, parents and teens.

“They build a stronger event,” Dewberry said. “Dave Cornuet has a history of law enforcement and has a good report with them.”

Raven Jefferson is new to the county and brought her two children to have a good time. Jefferson has a non-profit, Jream Foundation, Inc. She was able to meet new people and talk to HCSO’s deputy Eddie San Miguel about concerns and the non-profit.

The Boys and Girls Clubs of Highlands County are located in Sebring and Avon Park. Youth attend after-school programs that include snacks, homework, physical activities and leadership training.

Dewberry shared his feelings on the program.

“I think it’s beautiful,” he said. “We have awesome leadership from the top to the bottom who make sure we have everything we need to run smooth.”

SEBRING — Polk County Sheriff’s deputies have arrested Charles Fanz, 19, and Justin Cusson, 22 of Sebring on Thursday morning. Fanz’s address from February court records was on Buck Board Trail in Lake Wales. Both men are being charged with grand theft auto.

According to the arrest report, a Highlands County man reported his Ford Econoline van stolen on Wednesday. On Thursday morning, about 4:16 a.m., the Polk County deputies found the van at Combee Road S. near Wanesvill Avenue.

Polk County deputies decided the best way to stop the alleged thieves was with stop sticks on South Highway 98 and Winter Lake Road. The van was stopped and the men taken out of the vehicle.

Fanz was the driver with Cusson along for the ride as a passenger. After the pair were made aware of their rights, Fanz said he was picked up at his grandma’s home by Cusson and did not know the vehicle was stolen. Cusson, said he got the vehicle from someone in Avon Park after being in a fight. He did not say if he won the van or if it was a consolation prize for losing.

Fanz has never had a driver’s license according to PCSO.

In the Polk County Clerk of Courts records, Fanz was arrested June 12 for aggravated assault with a deadly weapon without intent to kill and bailed out. The case was no billed on June 21.

Cusson likely enjoyed his Oct. 28 birthday before landing in the “Polk County Pokey” as PCSO calls its jail. Cusson has two open cases in the Highlands County Courts, according to the Clerk of Courts. On Feb.1 Cusson was charged with grand theft of a vehicle, ironically, it was stolen from Polk County. He bonded out. Cusson was arrested on Feb. 11 for grand theft auto in Highlands County for grand theft of a vehicle. He allegedly stole a Ford F-150 that was reported stolen on Jan. 28. He bonded out.

Highlands County saw an additional 27 cases of COVID-19 with the release of Sunday’s numbers by the Florida Department of Health. That brings the total count to 2,706, which now includes 15 non-county residents.

The death rate remained at 118 in the county, while the hospitalizations also remained steady at 284.

Highlands County has seen roughly 16% (421) of its cases tied into long-term care facilities, which is nearly triple the state average of 6% of cases being attributed to a long-term care facility. According to the FDOH Long-term Care Facilities report, Kenilworth Care & Rehabilitation Center has 13 positive residents, while The Palms of Sebring has five residents and three staff members who tested positive.

The county has seen 67 cases tied to a correctional facility, which is 2% of all cases and lower than the state average of 3%.

In nearby counties, DeSoto saw an increase of nine cases and has seen 1,685 cases, while Glades remained at 610.

Hardee County saw eight new cases to bring the county’s total to 1,625 and Okeechobee County added 13 cases for a total of 1,763.

The state numbers went up quite a bit, although much of that can be attributed to increased testing, as there were 4,865 new cases out of more than 111,600 tests, which resulted in a positivity rate for new cases of 4.32%, which is 1.99% lower than the previous day, despite there being twice as many new cases.

There were 28 additional deaths, bringing the combined total of resident and non-resident deaths to 16,997.

According to the Johns Hopkins University Center for Systems Science and Engineering, there have now been 9.17 million cases in the United States and 230,814 deaths.

Globally, there have been 46.37 million cases and 1.2 million deaths. The United States had the most reported new cases for the day, with India, the United Kingdom and France also seeing large increases. The 46,290 new cases in France is 3% of the county’s total, while the UK saw 4% of its cases in the last 24 hours. 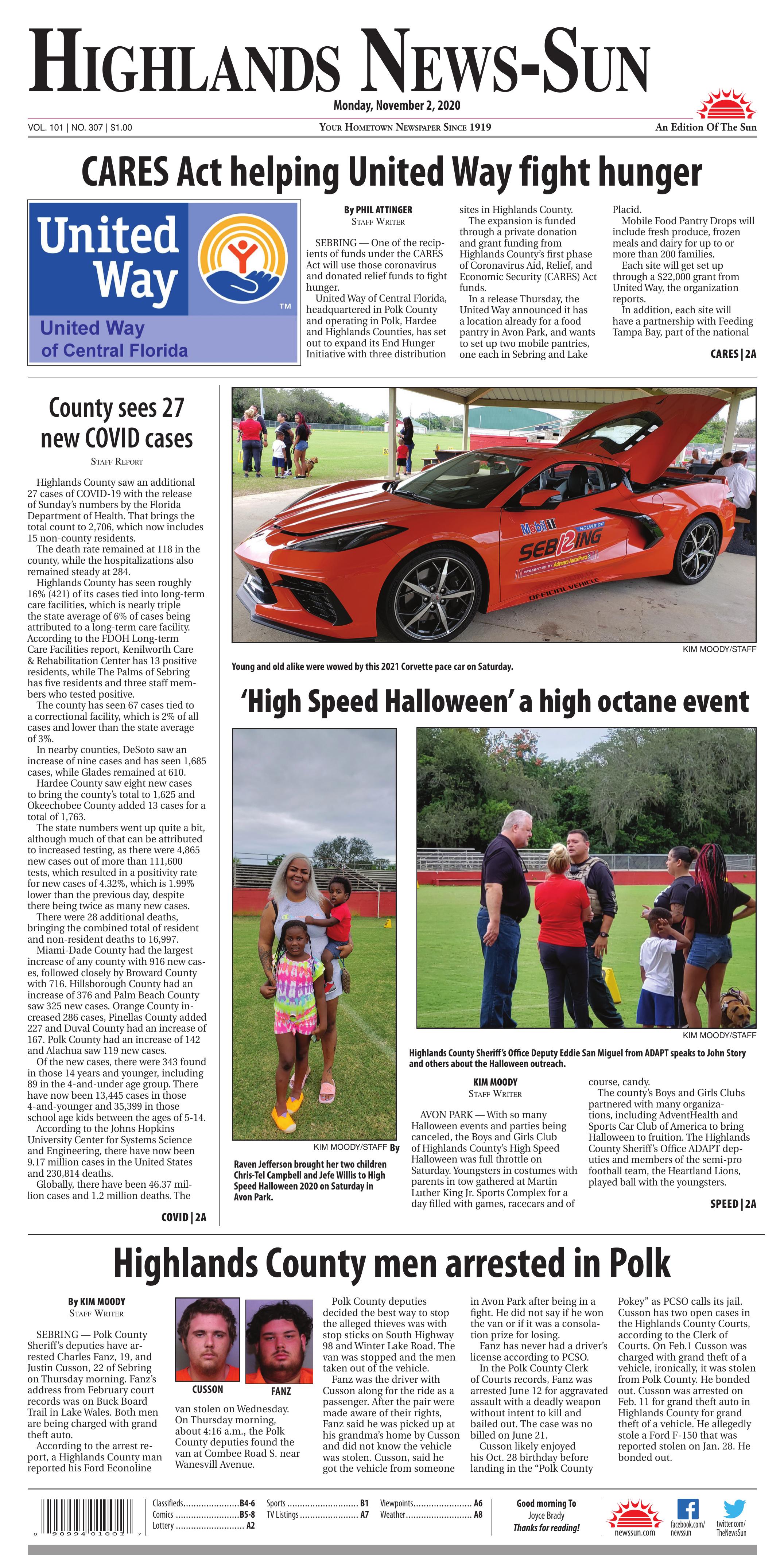