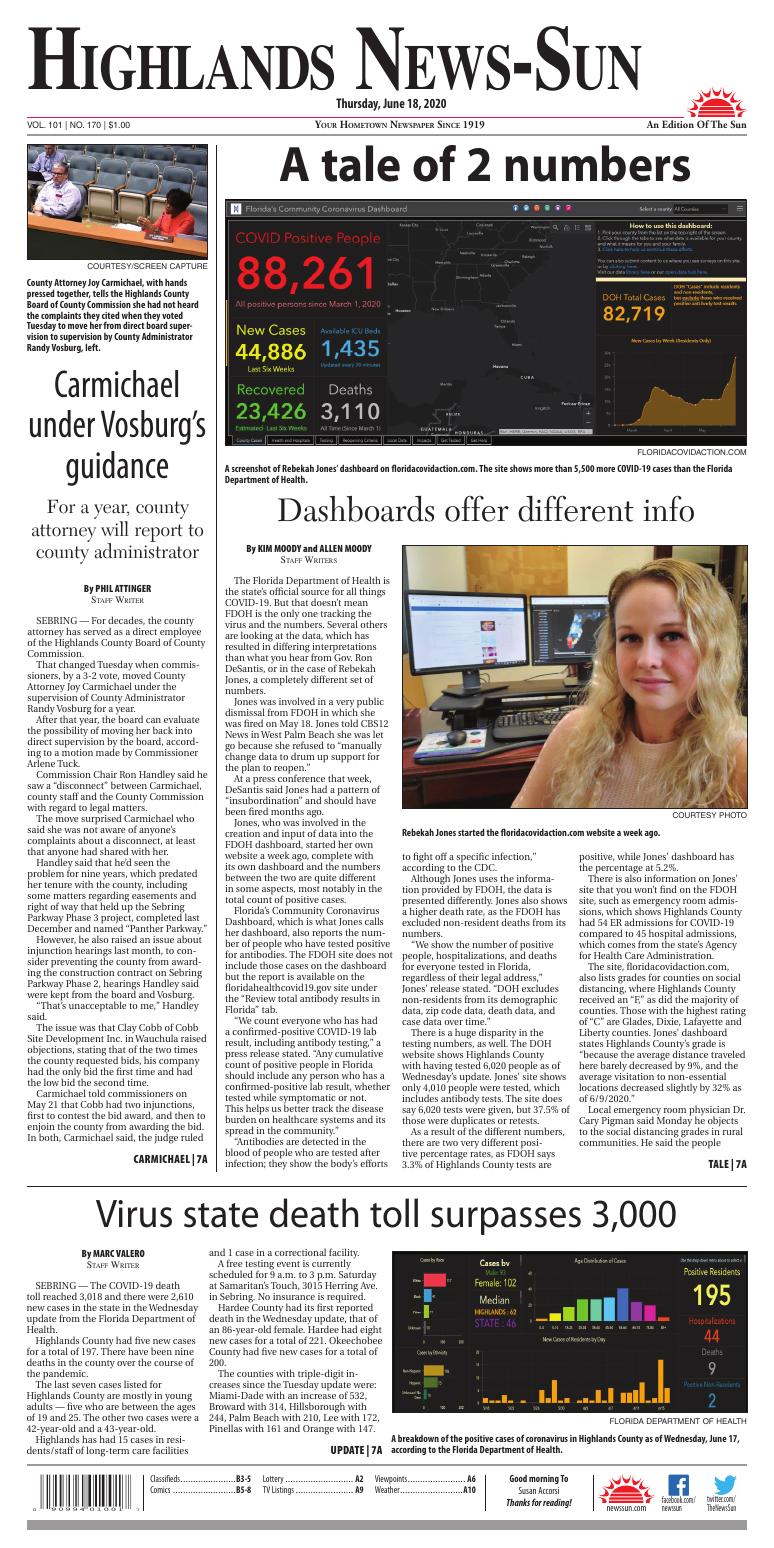 A screenshot of Rebekah Jones’ dashboard on floridacovidaction.com. The site shows more than 5,500 more COVID-19 cases than the Florida Department of Health.

Rebekah Jones’ dashboard for Highlands County on floridacovidaction.com shows the county with 208 COVID-19 cases, which is 11 more than the Florida Department of Health.

The Florida Department of Health is the state’s official source for all things COVID-19. But that doesn’t mean FDOH is the only one tracking the virus and the numbers. Several others are looking at the data, which has resulted in differing interpretations than what you hear from Gov. Ron DeSantis, or in the case of Rebekah Jones, a completely different set of numbers.

Jones was involved in a very public dismissal from FDOH in which she was fired on May 18. Jones told CBS12 News in West Palm Beach she was let go because she refused to “manually change data to drum up support for the plan to reopen.”

At a press conference that week, DeSantis said Jones had a pattern of “insubordination” and should have been fired months ago.

Jones, who was involved in the creation and input of data into the FDOH dashboard, started her own website a week ago, complete with its own dashboard and the numbers between the two are quite different in some aspects, most notably in the total count of positive cases.

Florida’s Community Coronavirus Dashboard, which is what Jones calls her dashboard, also reports the number of people who have tested positive for antibodies. The FDOH site does not include those cases on the dashboard but the report is available on the floridahealthcovid19.gov site under the “Review total antibody results in Florida” tab.

“We count everyone who has had a confirmed-positive COVID-19 lab result, including antibody testing,” a press release stated. “Any cumulative count of positive people in Florida should include any person who has a confirmed-positive lab result, whether tested while symptomatic or not. This helps us better track the disease burden on healthcare systems and its spread in the community.”

“Antibodies are detected in the blood of people who are tested after infection; they show the body’s efforts to fight off a specific infection,” according to the CDC.

Although Jones uses the information provided by FDOH, the data is presented differently. Jones also shows a higher death rate, as the FDOH has excluded non-resident deaths from its numbers.

“We show the number of positive people, hospitalizations, and deaths for everyone tested in Florida, regardless of their legal address,” Jones’ release stated. “DOH excludes non-residents from its demographic data, zip code data, death data, and case data over time.”

There is a huge disparity in the testing numbers, as well. The DOH website shows Highlands County with having tested 6,020 people as of Wednesday’s update. Jones’ site shows only 4,010 people were tested, which includes antibody tests. The site does say 6,020 tests were given, but 37.5% of those were duplicates or retests.

As a result of the different numbers, there are two very different positive percentage rates, as FDOH says 3.3% of Highlands County tests are positive, while Jones’ dashboard has the percentage at 5.2%.

There is also information on Jones’ site that you won’t find on the FDOH site, such as emergency room admissions, which shows Highlands County had 54 ER admissions for COVID-19 compared to 45 hospital admissions, which comes from the state’s Agency for Health Care Administration.

The site, floridacovidaction.com, also lists grades for counties on social distancing, where Highlands County received an “F,” as did the majority of counties. Those with the highest rating of “C” are Glades, Dixie, Lafayette and Liberty counties. Jones’ dashboard states Highlands County’s grade is “because the average distance traveled here barely decreased by 9%, and the average visitation to non-essential locations decreased slightly by 32% as of 6/9/2020.”

Local emergency room physician Dr. Cary Pigman said Monday he objects to the social distancing grades in rural communities. He said the people in settings such as Okeechobee and Highlands County have to drive to get most places such as work or the grocery store.

DeSantis said Tuesday he has no plans of shutting down the state again and said the increase in numbers is due to increased testing, as well as several “hot spots,” such as farm labor camps.

But University of Florida professor Mark Settles, director of the Plant Molecular and Cellular Biology Program, routinely updates COVID-19 information on his Facebook page and compared data for the last two weeks in May and the first two weeks of June and concluded, “Tests went up 10%. Positives have nearly doubled. The positivity rate also significantly increased. Tests are not increasing fast enough to explain the increase in Covid-19 positives in Florida.”

A breakdown of the positive cases of coronavirus in Highlands County as of Wednesday, June 17, according to the Florida Department of Health.

SEBRING — The COVID-19 death toll reached 3,018 and there were 2,610 new cases in the state in the Wednesday update from the Florida Department of Health.

Highlands County had five new cases for a total of 197. There have been nine deaths in the county over the course of the pandemic.

The last seven cases listed for Highlands County are mostly in young adults — five who are between the ages of 19 and 25. The other two cases were a 42-year-old and a 43-year-old.

Highlands has had 15 cases in residents/staff of long-term care facilities and 1 case in a correctional facility.

A free testing event is currently scheduled for 9 a.m. to 3 p.m. Saturday at Samaritan’s Touch, 3015 Herring Ave. in Sebring. No insurance is required.

The counties with triple-digit increases since the Tuesday update were: Miami-Dade with an increase of 532, Broward with 314, Hillsborough with 244, Palm Beach with 210, Lee with 172, Pinellas with 161 and Orange with 147.

A new pediatric report provides data on the number of cases in those under 18 years old. Highlands County had 12 cases in persons under 18, which was 9.1% of those under 18 who were tested. That is close to the statewide percentage of 9.2%.

Glades County had only six pediatric virus cases, but the highest percentage (35.3%) in the state of those tested who are positive. DeSoto County is a close second with 54 cases with a 35.1% positive rate among those under 18. Okeechobee County, with 36 pediatric cases, also has a very high percentage (28.6%) of those under 18 who have tested positive for COVID-19.

The total Florida case count is 82,719, as of Wednesday’s update.

County Attorney Joy Carmichael, with hands pressed together, tells the Highlands County Board of County Commission she had not heard the complaints they cited when they voted Tuesday to move her from direct board supervision to supervision by County Administrator Randy Vosburg, left.

SEBRING — For decades, the county attorney has served as a direct employee of the Highlands County Board of County Commission.

That changed Tuesday when commissioners, by a 3-2 vote, moved County Attorney Joy Carmichael under the supervision of County Administrator Randy Vosburg for a year.

After that year, the board can evaluate the possibility of moving her back into direct supervision by the board, according to a motion made by Commissioner Arlene Tuck.

Commission Chair Ron Handley said he saw a “disconnect” between Carmichael, county staff and the County Commission with regard to legal matters.

The move surprised Carmichael who said she was not aware of anyone’s complaints about a disconnect, at least that anyone had shared with her.

Handley said that he’d seen the problem for nine years, which predated her tenure with the county, including some matters regarding easements and right of way that held up the Sebring Parkway Phase 3 project, completed last December and named “Panther Parkway.”

However, he also raised an issue about injunction hearings last month, to consider preventing the county from awarding the construction contract on Sebring Parkway Phase 2, hearings Handley said were kept from the board and Vosburg.

“That’s unacceptable to me,” Handley said.

The issue was that Clay Cobb of Cobb Site Development Inc. in Wauchula raised objections, stating that of the two times the county requested bids, his company had the only bid the first time and had the low bid the second time.

Carmichael told commissioners on May 21 that Cobb had two injunctions, first to contest the bid award, and then to enjoin the county from awarding the bid. In both, Carmichael said, the judge ruled in the county’s favor.

On Tuesday, she said she kept Vosburg “in the loop” and that he knew of the hearing, while he may not have known the exact time of the hearing.”I think this has been characterized in a way that isn’t accurate, and I’m concerned about that,” Carmichael said.Commissioner Don Elwell asked Vosburg if the working relationship with Carmichael and expediting legal matters were better, worse or the same as before, and Vosburg said there is a “concerted effort to make it better.”

Carmichael said she thought the best solution would be better communication with the directors, but it seems, she said, that communication is taking place that isn’t being shared with her.

Elwell noted that her last evaluation numbers didn’t seem to warrant a change in structure.

Both he and Commissioner Greg Harris voted against making a change.

Commissioner Jim Brooks also expressed concern, since he wasn’t sure the board had the legal right to change the attorney’s supervision.

Vosburg said that the state legal language is broad, but counties can determine for themselves how to arrange their organizational charts.

After the vote, Harris asked if commissioners would still evaluate Carmichael directly. Tuck said they should, but Elwell thought that, at this point, they would not. 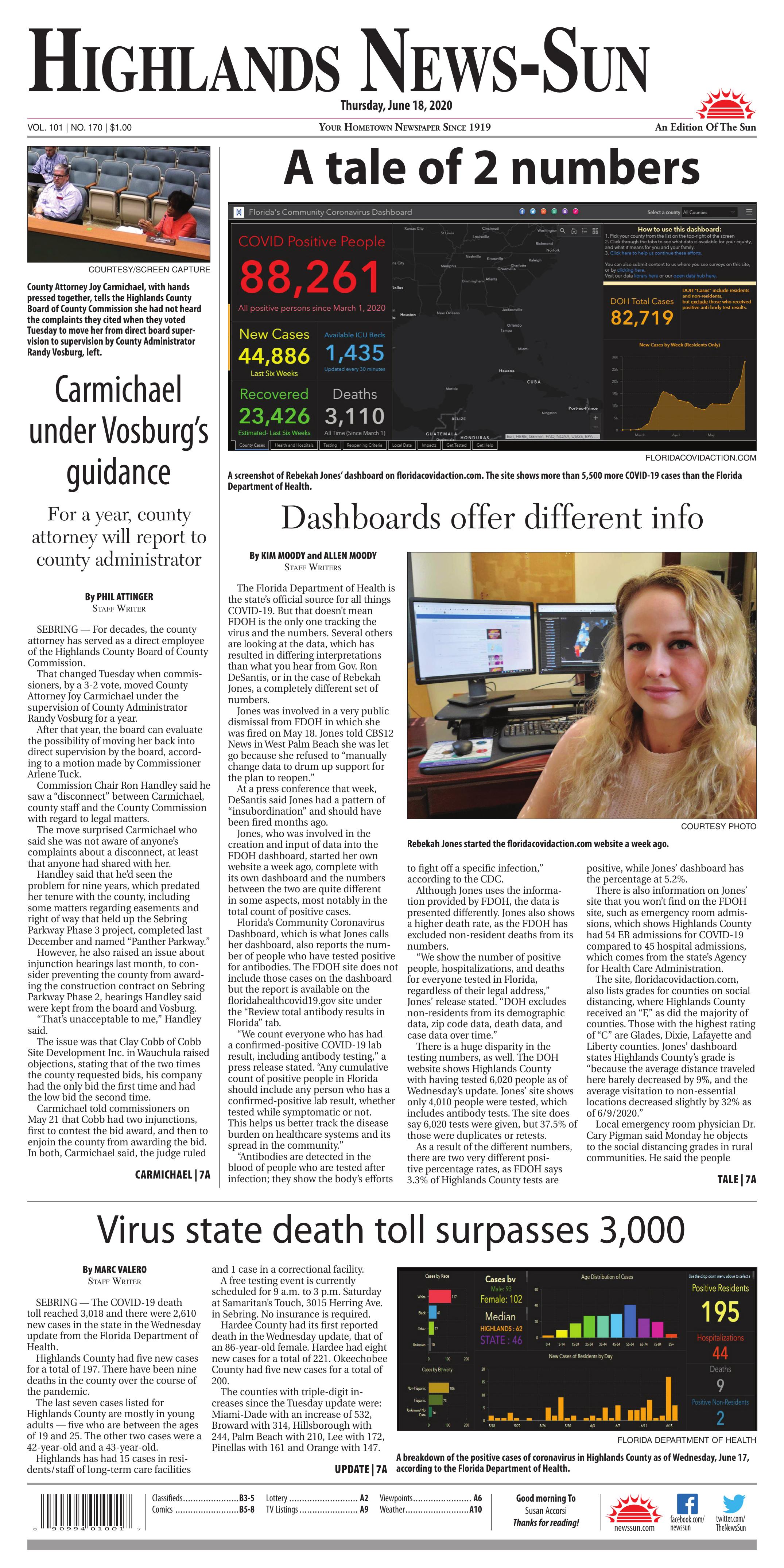