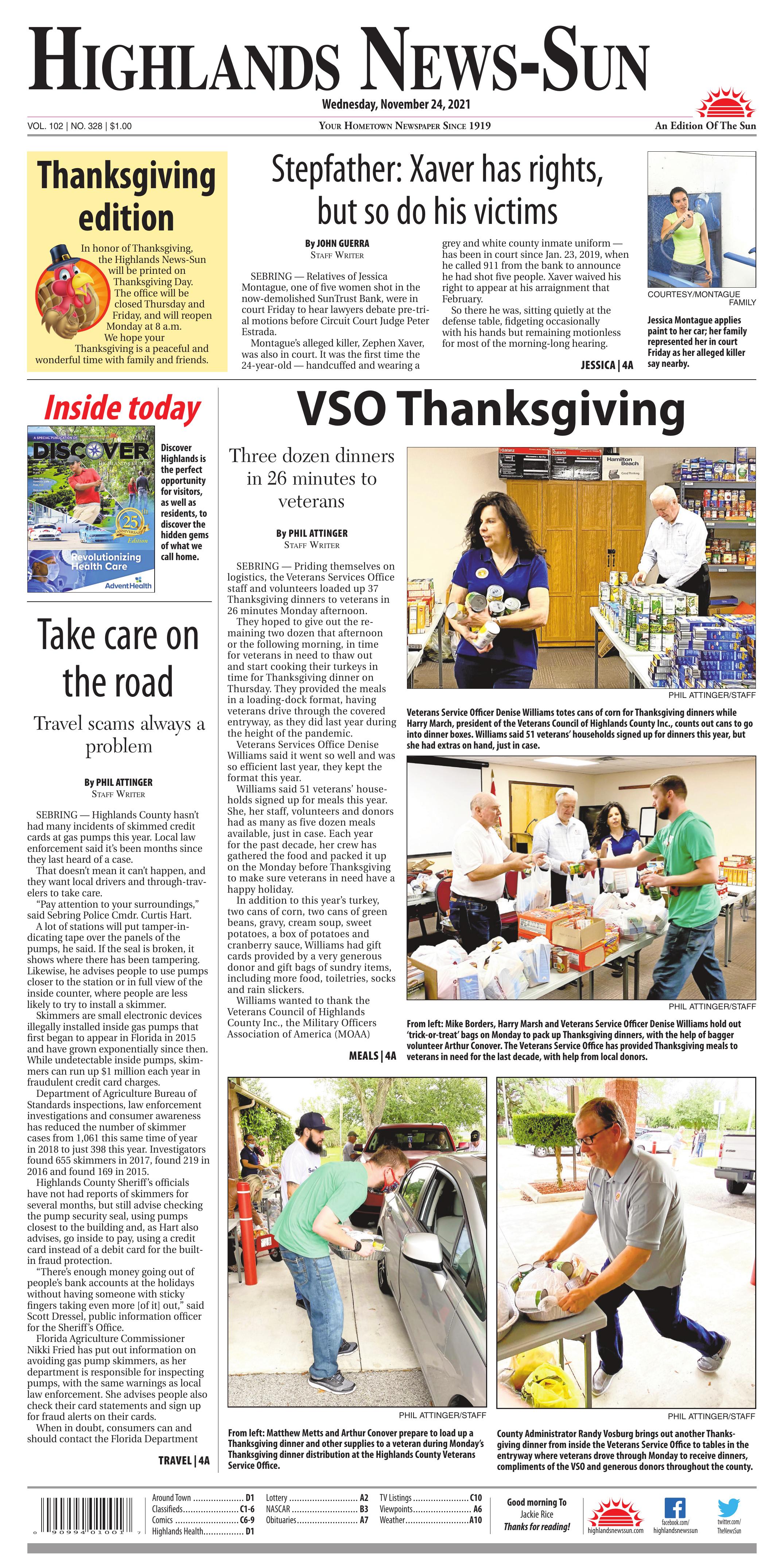 Highlands_news-sun
Stepfather: Xaver has rights, but so do his victims
COURTESY/MONTAGUE FAMILY

Jessica Montague applies paint to her car; her family represented her in court Friday as her alleged killer say nearby.

Montague’s alleged killer, Zephen Xaver, was also in court. It was the first time the 24-year-old — handcuffed and wearing a grey and white county inmate uniform — has been in court since Jan. 23, 2019, when he called 911 from the bank to announce he had shot five people. Xaver waived his right to appear at his arraignment that February.

So there he was, sitting quietly at the defense table, fidgeting occasionally with his hands but remaining motionless for most of the morning-long hearing. Greg Warner, Jessica’s stepfather, her mother Tina, and a brother sat behind the prosecution bench, glancing over at Xaver from time to time. Warner, a big man with a gentle demeanor, was asked about seeing the man accused of creating such destruction in his family as well as in the families of other victims.

“I’m not impressed,” the retired police officer said outside the Highlands County courtroom as legal arguments continued inside. “He took a beautiful person from us, from her children.”

Seeing the pudgy man in shackles also reminded Warner of how much love Jessica and her mother Tina shared every day until the day a mass shooter brought his nightmare to Jessica’s workplace.

“They were best friends,” said Warner, known as “Bubba” to his friends. “They say that about parents and kids, but they were best friends in the real sense. They could talk about everything. Every morning at 7:20 the phone would ring and it would be Jessica.”

In Sebring, Montague’s friends and those of her widowed husband, Jermaine Montague, have held car rallies every January in Jessica’s memory. That’s because she loved Ford Mustangs; Jermaine was fixing one up for her at the time of her death.

Now, Xaver’s trial is within sight, with jury selection scheduled for May 2022, six months from now. To stay on course, lawyers worked all morning Friday to get pre-trial motions out of the way. Defense lawyer Jane Allie McNeill’s job is to defend Xaver, so some of her motions dealt with jury selection, jury instructions, and having a neutral third party read victim impact statements rather than a family member. She urged Estrada to prevent such emotional testimony, which she argued could unfairly influence a jury.

Estrada denied the motion, citing Marsy’s Law, which in Florida and other states allows victims of crime to describe how the action of the defendant damaged their lives. Prosecutor Paul R. Wallace told Estrada he or another prosecution lawyer would step in and read statements should a witness become too “inflammatory or emotional.”

The family continues to remain strong, Warner said. “Jessica has three brothers and three kids. We can never replace her. Tina stays busy playing with her three grandchildren. She takes great care of them and holds them close.”

As for the pace of justice, the law enforcement officer knows that courts have procedures and processes that must be followed, especially in death penalty cases. As motions fly inside the courtroom, Warner expresses confidence in the trial’s outcome.

“They are prolonging the inevitable,” he said.

Veterans Service Officer Denise Williams totes cans of corn for Thanksgiving dinners while Harry March, president of the Veterans Council of Highlands County Inc., counts out cans to go into dinner boxes. Williams said 51 veterans’ households signed up for dinners this year, but she had extras on hand, just in case.

County Administrator Randy Vosburg brings out another Thanksgiving dinner from inside the Veterans Service Office to tables in the entryway where veterans drove through Monday to receive dinners, compliments of the VSO and generous donors throughout the county.

Even as volunteers and staff at the Highlands County Veterans Service Office prepared dinner boxes for veterans on Monday, donations were still coming in: cases of vegetables, soups and cranberry sauce.

Veterans Service Officer Denise Williams tosses a can of vegetables to Mike Borders, not in frame, as they and others prepared Thanksgiving dinners to give to veterans in need on Monday.

SEBRING — Priding themselves on logistics, the Veterans Services Office staff and volunteers loaded up 37 Thanksgiving dinners to veterans in 26 minutes Monday afternoon.

They hoped to give out the remaining two dozen that afternoon or the following morning, in time for veterans in need to thaw out and start cooking their turkeys in time for Thanksgiving dinner on Thursday. They provided the meals in a loading-dock format, having veterans drive through the covered entryway, as they did last year during the height of the pandemic.

Veterans Services Office Denise Williams said it went so well and was so efficient last year, they kept the format this year.

Williams said 51 veterans’ households signed up for meals this year. She, her staff, volunteers and donors had as many as five dozen meals available, just in case. Each year for the past decade, her crew has gathered the food and packed it up on the Monday before Thanksgiving to make sure veterans in need have a happy holiday.

Williams also wanted to thank anyone else she may have failed to mention here, especially those who wished to remain anonymous.

In honor of Thanksgiving, the Highlands News-Sun will be printed on Thanksgiving Day. The office will be closed Thursday and Friday, and will reopen Monday at 8 a.m. 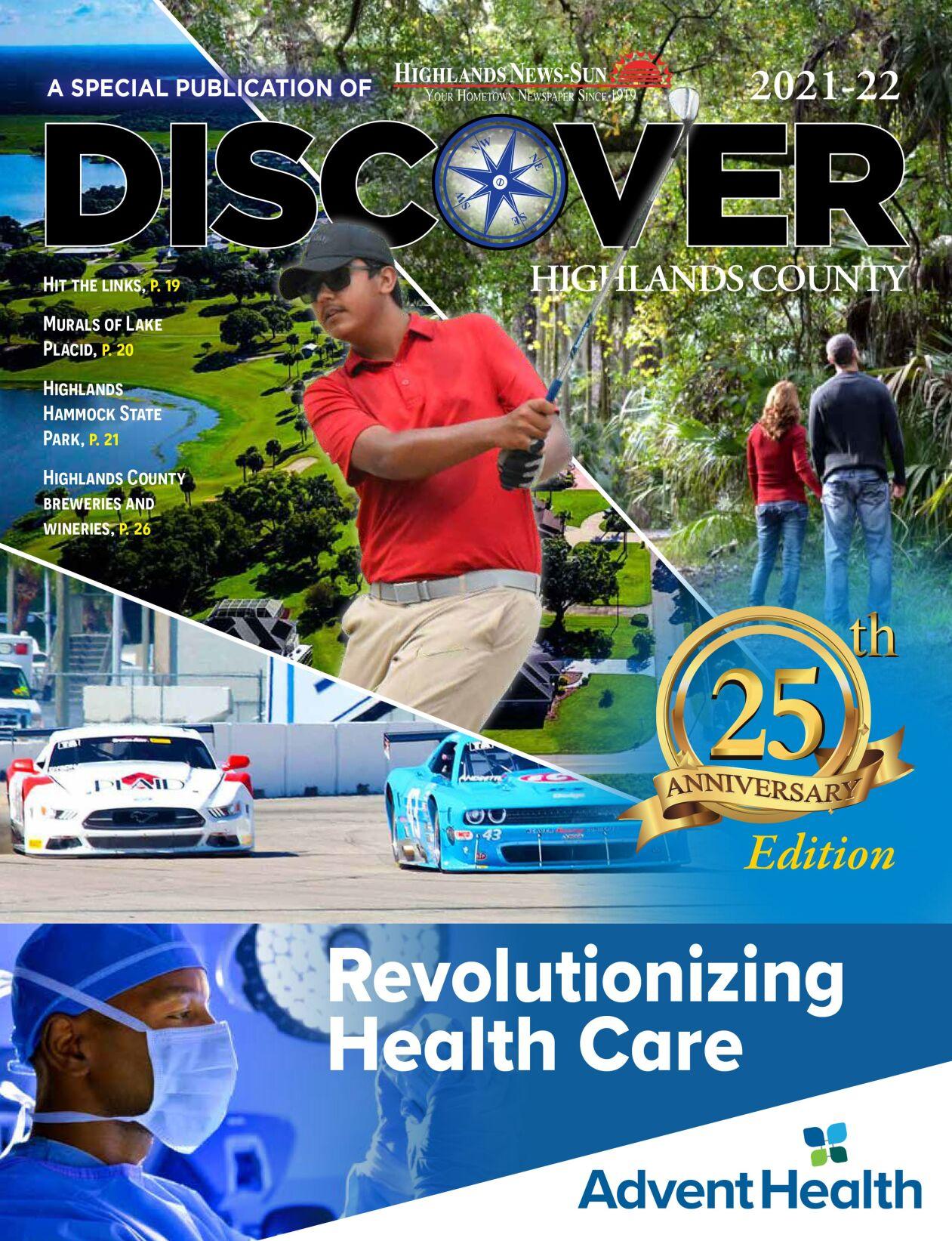 Discover Highlands is the perfect opportunity for visitors, as well as residents, to discover the hidden gems of what we call home.

Highlands_news-sun
Take care on the road to avoid travel scams

SEBRING — Highlands County hasn’t had many incidents of skimmed credit cards at gas pumps this year. Local law enforcement said it’s been months since they last heard of a case.

That doesn’t mean it can’t happen, and they want local drivers and through-travelers to take care.

A lot of stations will put tamper-indicating tape over the panels of the pumps, he said. If the seal is broken, it shows where there has been tampering. Likewise, he advises people to use pumps closer to the station or in full view of the inside counter, where people are less likely to try to install a skimmer.

Skimmers are small electronic devices illegally installed inside gas pumps that first began to appear in Florida in 2015 and have grown exponentially since then. While undetectable inside pumps, skimmers can run up $1 million each year in fraudulent credit card charges.

Department of Agriculture Bureau of Standards inspections, law enforcement investigations and consumer awareness has reduced the number of skimmer cases from 1,061 this same time of year in 2018 to just 398 this year. Investigators found 655 skimmers in 2017, found 219 in 2016 and found 169 in 2015.

Highlands County Sheriff’s officials have not had reports of skimmers for several months, but still advise checking the pump security seal, using pumps closest to the building and, as Hart also advises, go inside to pay, using a credit card instead of a debit card for the built-in fraud protection.

“There’s enough money going out of people’s bank accounts at the holidays without having someone with sticky fingers taking even more [of it] out,” said Scott Dressel, public information officer for the Sheriff’s Office.

Florida Agriculture Commissioner Nikki Fried has put out information on avoiding gas pump skimmers, as her department is responsible for inspecting pumps, with the same warnings as local law enforcement. She advises people also check their card statements and sign up for fraud alerts on their cards.

When in doubt, consumers can and should contact the Florida Department of Agriculture and Consumer Services to file a consumer complaint at FloridaConsumerHelp.com, 1-800-HELP-FLA or 1-800-FL-AYUDA, or Spanish speakers.

Holiday hotelWhen on the road this season, the Federal Trade Commission (FTC) advises people plan their trips and do smart shopping first for good deals, but also to avoid scams, dealing with businesses they trust and getting copies of cancellation and refund policies.

- Get recommendations from family and friends and look online to see what people say about their service and prices.

- Call to verify reservations and arrangements, getting details and specifics from the airlines and hotels themselves, not from travel agents.

- Pay with a credit card, again for fraud protection. If you don’t get what you paid for, you have the option to dispute the charges. Just don’t give your account number to any business until you’ve verified its reputation.

- Consider using a travel app to help search for airfares and hotel rates and to manage your itinerary.

The Florida Department of Agriculture and Consumer Services (FDACS) also warns of front desk phishing scams, where thieves call a hotel room from an untraceable number, pretending to be a front desk employee, saying they need to verify all your information again or obtain an alternate method of payment. The call usually comes in the middle of the night when most people are sleeping, giving the thieves time to access your accounts before you realize what has happened. If the hotel you are staying in has a problem with your credit card information, they will explain the situation to you at check-in, not later.

Therefore, in addition to making all payments face-to-face and using credit cards instead of debit cards for fraud protection, you should never give information over the phone if called at your hotel room, and go to the front desk to deal with problems with payment.

Also, don’t share your location on social media, giving burglars a heads-up that you are not home or identity thieves a tip on where to call you.

Traffic is terrificFor now, traffic in Highlands County hasn’t gotten significantly worse for the holidays, but traffic has picked up, said Hart, either from holiday shopping and travel.

Dressel also said to leave a little early and take more time to get where you’re going.

“Realize there’s more traffic. It will take longer,” said Dressel, adding a warning to put away distractions like phones and shopping lists and be alert. “You never know what the other guy’s going to do.”

When driving around parking lots, Dressel said, be patient and forgiving, even if someone takes “your” parking space.

“People need to be kinder these days,” Dressel said.