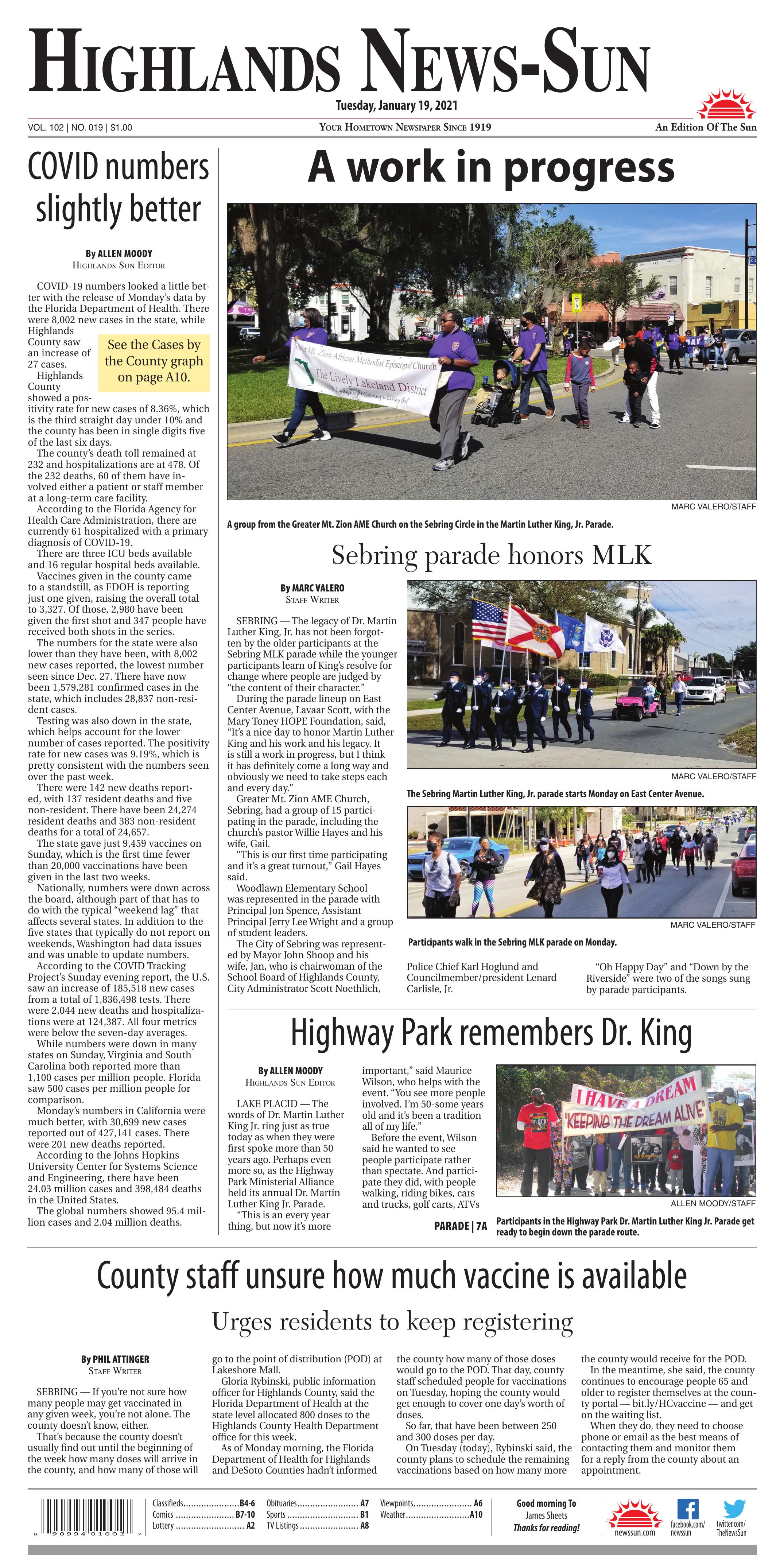 A group from the Greater Mt. Zion AME Church on the Sebring Circle in the Martin Luther King, Jr. Parade.

Participants walk in the Sebring MLK parade on Monday.

SEBRING — The legacy of Dr. Martin Luther King, Jr. has not been forgotten by the older participants at the Sebring MLK parade while the younger participants learn of King’s resolve for change where people are judged by “the content of their character.”

During the parade lineup on East Center Avenue, Lavaar Scott, with the Mary Toney HOPE Foundation, said, “It’s a nice day to honor Martin Luther King and his work and his legacy. It is still a work in progress, but I think it has definitely come a long way and obviously we need to take steps each and every day.”

Greater Mt. Zion AME Church, Sebring, had a group of 15 participating in the parade, including the church’s pastor Willie Hayes and his wife, Gail.

“This is our first time participating and it’s a great turnout,” Gail Hayes said.

Woodlawn Elementary School was represented in the parade with Principal Jon Spence, Assistant Principal Jerry Lee Wright and a group of student leaders.

The City of Sebring was represented by Mayor John Shoop and his wife, Jan, who is chairwoman of the School Board of Highlands County, City Administrator Scott Noethlich, Police Chief Karl Hoglund and Councilmember/president Lenard Carlisle, Jr.

“Oh Happy Day” and “Down by the Riverside” were two of the songs sung by parade participants.

Participants in the Highway Park Dr. Martin Luther King Jr. Parade get ready to begin down the parade route.

“This is an every year thing, but now it’s more important,” said Maurice Wilson, who helps with the event. “You see more people involved. I’m 50-some years old and it’s been a tradition all of my life.”

Before the event, Wilson said he wanted to see people participate rather than spectate. And participate they did, with people walking, riding bikes, cars and trucks, golf carts, ATVs and even horses.

“This is probably our biggest one in years,” Wilson said of the good-sized crowd that took part in the parade.

Wilson said King’s legacy is greater than other civil rights activists due to his peaceful approach, which is more relevant now than ever.

“Right now we need peace in this world,” he said.

In addition to learning about King, Wilson said it was important for young people to learn about history, both on a larger scale, as well as the local history.

“Our young kids are not getting the education on Dr. Martin Luther King, Frederick Douglass, Malcolm X and all the different things, and we want our kids to see that history,” he said. “This year, we’re focusing on our ancestors from our own community. Mr. Elijah Smith was our first Black police officer, Mr. Hawthorne was the first millionaire in our community and we’re focusing on these people. We want our kids to know the history of our own community.”

Many of the pioneers of Highway Park, such as Major Callahan, W.C. Holden and D.J. Walker have passed away and Wilson wants to see the younger people take over and keep those legacies alive.

Wilson believes true change is possible and it’s up to this generation to make that change.

“The dream still lives,” he said. “A lot of work still needs to be done. We’re that change now, so that’s what we’re trying to do is make that change now — the atmosphere and the different mindsets of people. Our world is in a bad place right now, but we’re going to get there.”

Highlands_news-sun
County unsure how much vaccine is available

SEBRING — If you’re not sure how many people may get vaccinated in any given week, you’re not alone. The county doesn’t know, either.

That’s because the county doesn’t usually find out until the beginning of the week how many doses will arrive in the county, and how many of those will go to the point of distribution (POD) at Lakeshore Mall.

As of Monday morning, the Florida Department of Health for Highlands and DeSoto Counties hadn’t informed the county how many of those doses would go to the POD. That day, county staff scheduled people for vaccinations on Tuesday, hoping the county would get enough to cover one day’s worth of doses.

On Tuesday (today), Rybinski said, the county plans to schedule the remaining vaccinations based on how many more the county would receive for the POD.

In the meantime, she said, the county continues to encourage people 65 and older to register themselves at the county portal — bit.ly/HCvaccine — and get on the waiting list.

When they do, they need to choose phone or email as the best means of contacting them and monitor them for a reply from the county about an appointment.

The Health Department oversees the flow of supplies into the county, to include the amount of vaccine going to hospitals and long-term or assisted living facilities.

Reports from the Health Department state that, to date, 2,980 people in Highlands County have had just their first dose and another 347 have had their second: 3,327 altogether.

Despite reports that Gov. Ron DeSantis wants to make the vaccines available at Publix Supermarkets Pharmacies, Rybinski said that, at this time, local Publix pharmacies have not been designated as places to get vaccinations.

Although the county is hosting the registration process through its servers, she said, the Health Department is still the lead agency. It both calls the shots and gives the shots, with some assistance from contracted nurses from AdventHealth to give shots and from county Emergency Management personnel to register people and schedule appointments.

COVID-19 numbers looked a little better with the release of Monday’s data by the Florida Department of Health. There were 8,002 new cases in the state, while Highlands County saw an increase of 27 cases.

Highlands County showed a positivity rate for new cases of 8.36%, which is the third straight day under 10% and the county has been in single digits five of the last six days.

The county’s death toll remained at 232 and hospitalizations are at 478. Of the 232 deaths, 60 of them have involved either a patient or staff member at a long-term care facility.

According to the Florida Agency for Health Care Administration, there are currently 61 hospitalized with a primary diagnosis of COVID-19.

Vaccines given in the county came to a standstill, as FDOH is reporting just one given, raising the overall total to 3,327. Of those, 2,980 have been given the first shot and 347 people have received both shots in the series.

The numbers for the state were also lower than they have been, with 8,002 new cases reported, the lowest number seen since Dec. 27. There have now been 1,579,281 confirmed cases in the state, which includes 28,837 non-resident cases.

Testing was also down in the state, which helps account for the lower number of cases reported. The positivity rate for new cases was 9.19%, which is pretty consistent with the numbers seen over the past week.

The state gave just 9,459 vaccines on Sunday, which is the first time fewer than 20,000 vaccinations have been given in the last two weeks.

Nationally, numbers were down across the board, although part of that has to do with the typical “weekend lag” that affects several states. In addition to the five states that typically do not report on weekends, Washington had data issues and was unable to update numbers.

According to the COVID Tracking Project’s Sunday evening report, the U.S. saw an increase of 185,518 new cases from a total of 1,836,498 tests. There were 2,044 new deaths and hospitalizations were at 124,387. All four metrics were below the seven-day averages.

Monday’s numbers in California were much better, with 30,699 new cases reported out of 427,141 cases. There were 201 new deaths reported.

According to the Johns Hopkins University Center for Systems Science and Engineering, there have been 24.03 million cases and 398,484 deaths in the United States.