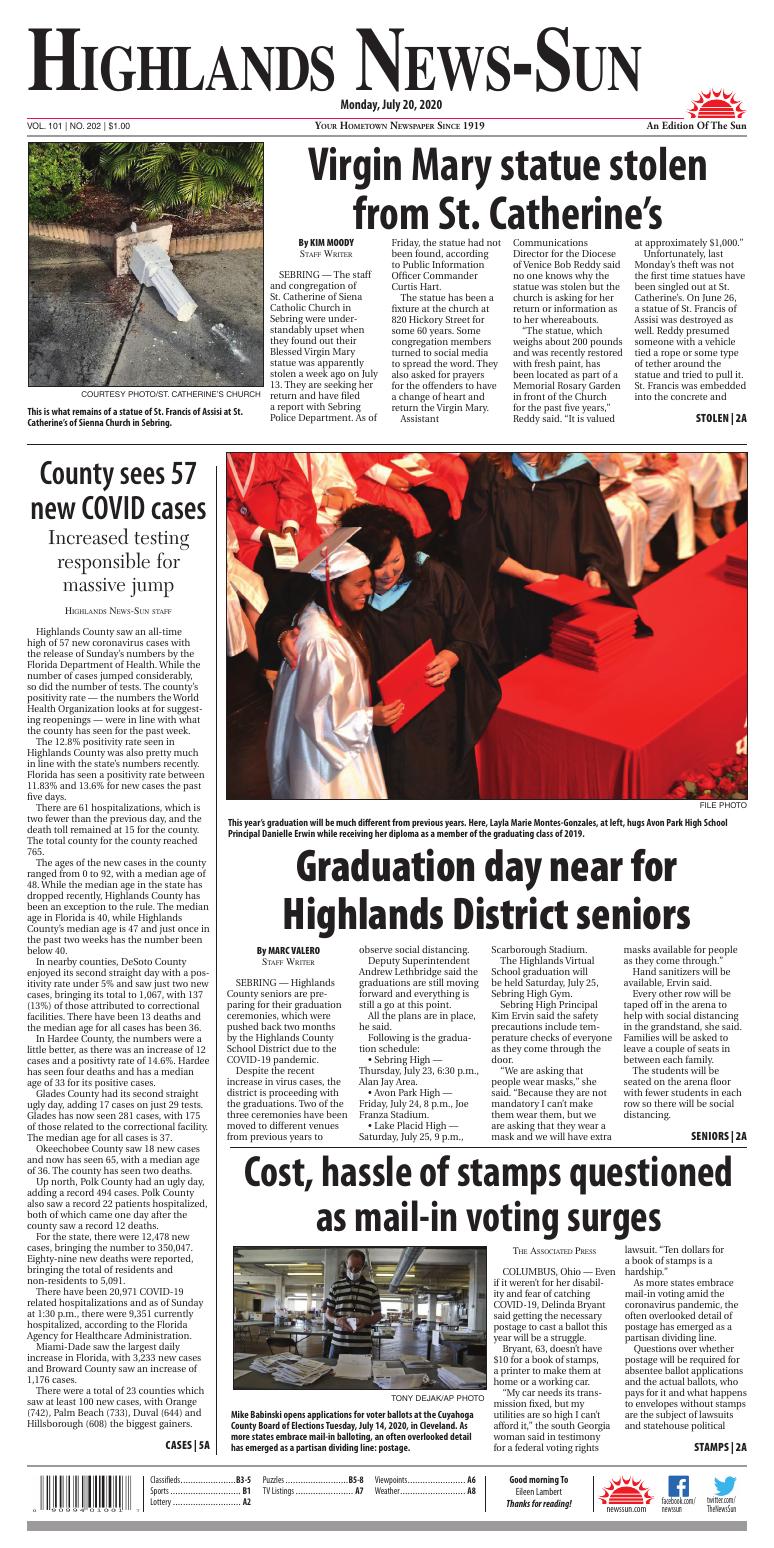 This is what remains of a statue of St. Francis of Assisi at St. Catherine’s of Sienna Church in Sebring.

A picture of the Blessed Virgin Mary statue stolen from St. Catherine’s of Sienna in Sebring. The congregation would like her back.

SEBRING — The staff and congregation of St. Catherine of Siena Catholic Church in Sebring were understandably upset when they found out their Blessed Virgin Mary statue was apparently stolen a week ago on July 13. They are seeking her return and have filed a report with Sebring Police Department. As of Friday, the statue had not been found, according to Public Information Officer Commander Curtis Hart.

The statue has been a fixture at the church at 820 Hickory Street for some 60 years. Some congregation members turned to social media to spread the word. They also asked for prayers for the offenders to have a change of heart and return the Virgin Mary.

Assistant Communications Director for the Diocese of Venice Bob Reddy said no one knows why the statue was stolen but the church is asking for her return or information as to her whereabouts.

“The statue, which weighs about 200 pounds and was recently restored with fresh paint, has been located as part of a Memorial Rosary Garden in front of the Church for the past five years,” Reddy said. “It is valued at approximately $1,000.”

Unfortunately, last Monday’s theft was not the first time statues have been singled out at St. Catherine’s. On June 26, a statue of St. Francis of Assisi was destroyed as well. Reddy presumed someone with a vehicle tied a rope or some type of tether around the statue and tried to pull it. St. Francis was embedded into the concrete and broke in half.

“Both incidents are deeply disturbing and upsetting for the Faith community,” Reddy said.

A report was filed in the vandalism case also with Sebring Police Department.

“While it is unknown why the statues were targeted, it cannot be ignored that many such religious symbols have been vandalized or damaged nationwide in response to the recent social unrest,” Reddy said. “The reality is that these statues represent peace and faith. The Blessed Virgin Mary, Mother of Jesus Christ, is a highly regarded symbol of all that is pure and good in the world. The devotion to Mary is deeply rooted in the Catholic Faith. St. Francis of Assisi, best known for his love of nature and of founding the Franciscan religious community, lived in Italy during late 12th and early 13th centuries and professed peace and a love for all God’s creation.”

Anyone with any information regarding the whereabouts of the Blessed Virgin Mary or the vandalism of St. Francis of Assisi is asked to call the Sebring Police Department.

This year’s graduation will be much different from previous years. Here, Layla Marie Montes-Gonzales, at left, hugs Avon Park High School Principal Danielle Erwin while receiving her diploma as a member of the graduating class of 2019.

Lake Placid High offered this example of how the seating will be arranged for its graduation ceremony at Roger Scarborough Field on Saturday at 9 p.m.

Despite the recent increase in virus cases, the district is proceeding with the graduations. Two of the three ceremonies have been moved to different venues from previous years to observe social distancing.

Deputy Superintendent Andrew Lethbridge said the graduations are still moving forward and everything is still a go at this point.

All the plans are in place, he said.

Following is the graduation schedule:

Sebring High Principal Kim Ervin said the safety precautions include temperature checks of everyone as they come through the door.

“We are asking that people wear masks,” she said. “Because they are not mandatory I can’t make them wear them, but we are asking that they wear a mask and we will have extra masks available for people as they come through.”

Every other row will be taped off in the arena to help with social distancing in the grandstand, she said. Families will be asked to leave a couple of seats in between each family.

The students will be seated on the arena floor with fewer students in each row so there will be social distancing.

“We are asking that all of our students wear masks at least until they come up to the stage to receive their diploma and get their picture taken,” Ervin.

The capacity of the arena is 3,200, but there will less than one-third of that number at graduation, she said. Students have been promised at least two tickets for guests/family members.

About 290 students will be walking, but about 310 graduated, Ervin said. Some students who were going into the military have already come in to pick up their diploma.

“We have been able to maintain our normal ticket allotment by having graduates sit with their families on the football field while maintaining social distancing,” Tunning said.

“We are extremely excited and grateful that we are able to have our graduation ceremony,” he said. “The 2020 graduates have endured quite the senior year and they deserve to have their celebration. It’s going to be quite an exciting evening.”

Mike Babinski opens applications for voter ballots at the Cuyahoga County Board of Elections Tuesday, July 14, 2020, in Cleveland. As more states embrace mail-in balloting, an often overlooked detail has emerged as a partisan dividing line: postage.

Applications for voter ballots are seen at the Cuyahoga County Board of Elections Tuesday, July 14, 2020, in Cleveland. As more states embrace mail-in balloting, an often overlooked detail has emerged as a partisan dividing line: postage. Questions over whether postage will be required for absentee ballot applications and ballots themselves, who pays for it and what happen to envelopes without stamps are the subject of lawsuits and Statehouse political brawls. (AP Photo/Tony Dejak)

COLUMBUS, Ohio — Even if it weren’t for her disability and fear of catching COVID-19, Delinda Bryant said getting the necessary postage to cast a ballot this year will be a struggle.

“My car needs its transmission fixed, but my utilities are so high I can’t afford it,” the south Georgia woman said in testimony for a federal voting rights lawsuit. “Ten dollars for a book of stamps is a hardship.”

As more states embrace mail-in voting amid the coronavirus pandemic, the often overlooked detail of postage has emerged as a partisan dividing line.

Questions over whether postage will be required for absentee ballot applications and the actual ballots, who pays for it and what happens to envelopes without stamps are the subject of lawsuits and statehouse political brawls.

“Charging money for the right to vote is unconstitutional, whether it’s a penny or a dollar,” said Sean Young, legal director of the ACLU of Georgia, which is representing Black Voters Matter. “Many voters lack internet access. Many voters lack a credit card, which is required to buy stamps online. One voter did not receive his book of stamps for two weeks after he ordered it.”

The postage debate has become vehement in Ohio, where the state elections chief, a Republican, has asked for the authority to pre-pay postage on absentee ballot applications and the ballots themselves. So far, the GOP-led Legislature has resisted.

Opponents of the proposal by Secretary of State Frank LaRose argue that pre-paying postage could lead to more mail-in ballots being requested than used. Voters who requested a mail-in ballot but for whatever reason — choose to vote in person on Election Day will have to cast a provisional ballot so local election boards can be sure they did not vote twice. About 20% of provisional ballots are typically rejected.

During floor debate in June, state Rep. Bill Seitz, a Cincinnati Republican, said it’s also an added expense in a year the virus has ravaged government budgets. It would cost the state $1.5 million on top of the $1.5 million Ohio already is paying to mail ballot applications for November’s presidential election.

“So it would be expensive at a time when we’re facing economic depression, economic problems throughout the state,” he said. “And this is not the time to be needlessly spending money.”

Another complication with requiring stamps is knowing how much postage to use.

Election boards are required by federal postal regulations to include in a voter’s packet exactly how much postage is required to return their ballot. Some states, however, require a copy of a valid ID, verification of college enrollment status or notary documentation, and that can add an unknown amount of weight to the ballot, which requires more postage.

Marti Johnson, a spokeswoman for the U.S. Postal Service, said the post office delivers every piece of election mail to its destination — with or without adequate postage.

“We are proactively working with state and local election officials on mailing requirements, including postage payment,” she said in a statement. “In cases where a ballot enters the mailstream without the proper amount of postage, the Postal Service will collect postage from the appropriate Board of Elections.”

In Florida last month, U.S. District Judge Robert Hinkle rejected a motion by liberal groups that would have required free postage for mail-in ballots on the grounds that stamps represent a poll tax. Hinkle compared stamps to the costs voters incur when driving or riding the bus to the polls.

“Postage charged by the United States Postal Service — like the fee charged by any courier or the bus fare for getting to the polls to vote in person — is not a tax,” Hinkle wrote.

Facing a similar legal argument in South Carolina, the state’s Election Commission recently went the other way. It agreed as part of a stipulation to provide prepaid absentee ballots for the November election “regardless of the number of voters deemed qualified to vote by absentee ballot.”

Highlands County saw an all-time high of 57 new coronavirus cases with the release of Sunday’s numbers by the Florida Department of Health. While the number of cases jumped considerably, so did the number of tests. The county’s positivity rate — the numbers the World Health Organization looks at for suggesting reopenings — were in line with what the county has seen for the past week.

The 12.8% positivity rate seen in Highlands County was also pretty much in line with the state’s numbers recently. Florida has seen a positivity rate between 11.83% and 13.6% for new cases the past five days.

There are 61 hospitalizations, which is two fewer than the previous day, and the death toll remained at 15 for the county. The total county for the county reached 765.

In nearby counties, DeSoto County enjoyed its second straight day with a positivity rate under 5% and saw just two new cases, bringing its total to 1,067, with 137 (13%) of those attributed to correctional facilities. There have been 13 deaths and the median age for all cases has been 36.

In Hardee County, the numbers were a little better, as there was an increase of 12 cases and a positivty rate of 14.6%. Hardee has seen four deaths and has a median age of 33 for its positive cases.

Glades County had its second straight ugly day, adding 17 cases on just 29 tests. Glades has now seen 281 cases, with 175 of those related to the correctional facility. The median age for all cases is 37.

Okeechobee County saw 18 new cases and now has seen 65, with a median age of 36. The county has seen two deaths.

For the state, there were 12,478 new cases, bringing the number to 350,047. Eighty-nine new deaths were reported, bringing the total of residents and non-residents to 5,091.

There have been 20,971 COVID-19 related hospitalizations and as of Sunday at 1:30 p.m., there were 9,351 currently hospitalized, according to the Florida Agency for Healthcare Administration.

Miami-Dade saw the largest daily increase in Florida, with 3,233 new cases and Broward County saw an increase of 1,176 cases. 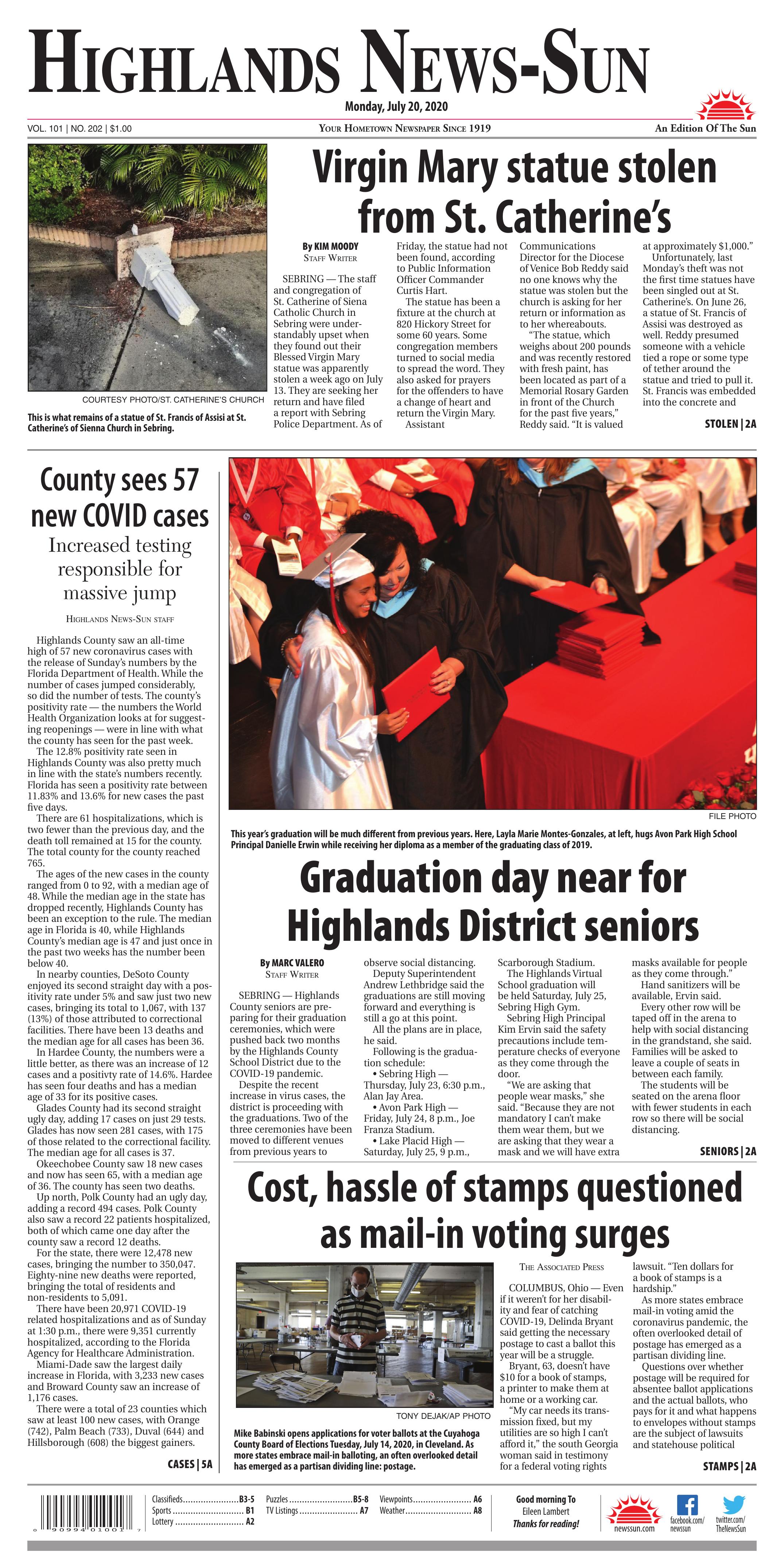