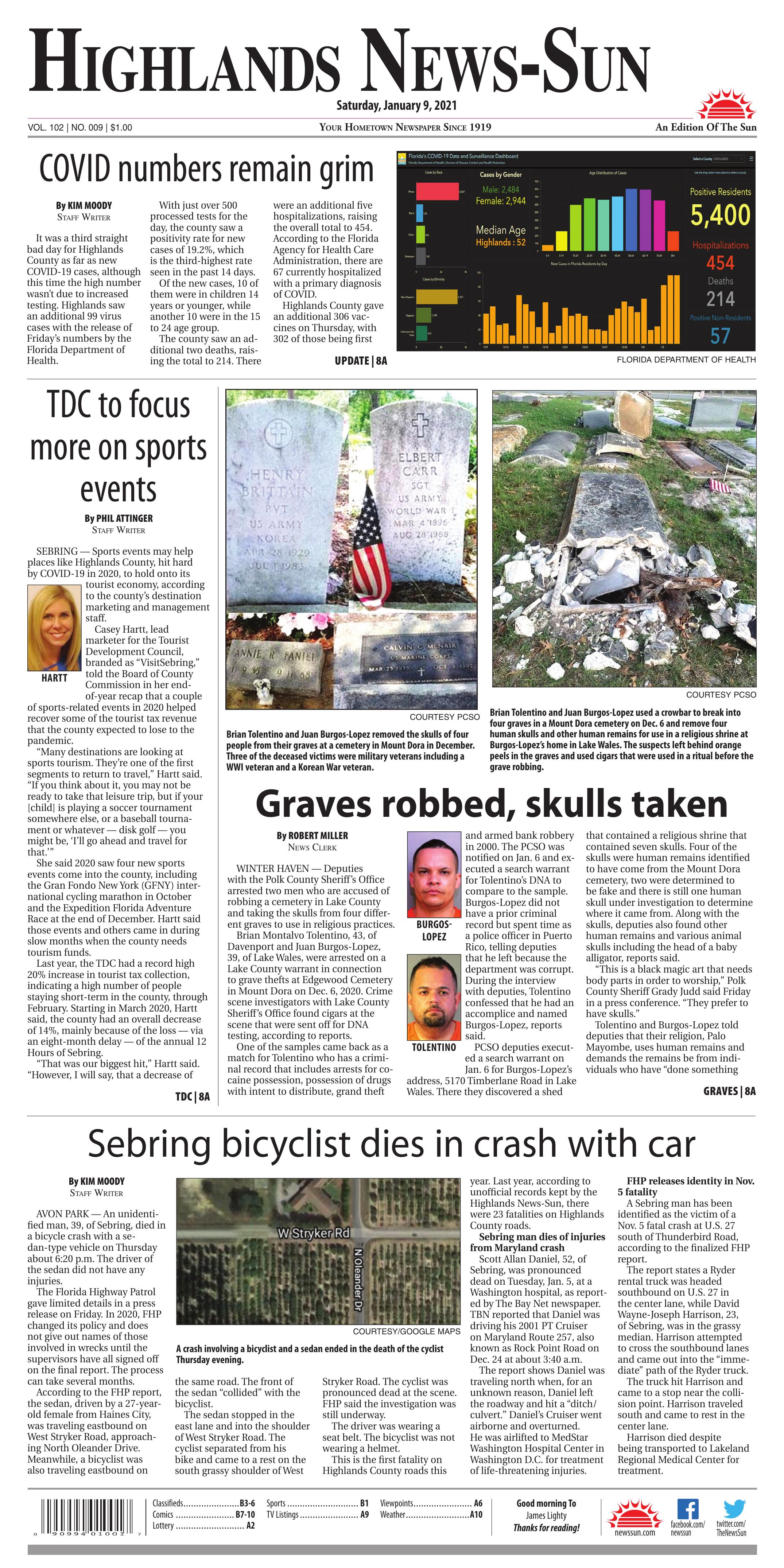 It was a third straight bad day for Highlands County as far as new COVID-19 cases, although this time the high number wasn’t due to increased testing. Highlands saw an additional 99 virus cases with the release of Friday’s numbers by the Florida Department of Health.

With just over 500 processed tests for the day, the county saw a positivity rate for new cases of 19.2%, which is the third-highest rate seen in the past 14 days.

The United States reported more than 4,000 COVID-19 deaths for the first time, according to the COVID Tracking Project’s Thursday night report. There were 4,033 new deaths reported, which pushed the seven-day average to 2,750, which is also a record.

Numbers will likely be high once again, as the California Department of Public Health reported 50,030 new cases on Friday and an additional 493 deaths. That brings California’s total cases to 2,568,641 and 28,538 deaths.

According to the Johns Hopkins University Center for Systems Science and Engineering, the United States has seen a total of 21.72 million cases and had 367,143 deaths.

Globally, there have been 88.5 million cases and 1.9 million deaths.

Polk County Sheriff’s deputies found this religious shrine in a shed on the property of Juan Burgos-Lopez, a self-proclaimed religious leader of the Palo Mayombe religion. Along with various animal skulls, deputies found five human skulls and other human remains. The skulls were taken from a cemetery in Mount Dora in December 2020.

Brian Tolentino and Juan Burgos-Lopez used a crowbar to break into four graves in a Mount Dora cemetery on Dec. 6 and remove four human skulls and other human remains for use in a religious shrine at Burgos-Lopez’s home in Lake Wales. The suspects left behind orange peels in the graves and used cigars that were used in a ritual before the grave robbing.

Brian Tolentino and Juan Burgos-Lopez removed the skulls of four people from their graves at a cemetery in Mount Dora in December. Three of the deceased victims were military veterans including a WWI veteran and a Korean War veteran.

WINTER HAVEN — Deputies with the Polk County Sheriff's Office arrested two men who are accused of robbing a cemetery in Lake County and taking the skulls from four different graves to use in religious practices.

Brian Montalvo Tolentino, 43, of Davenport and Juan Burgos-Lopez, 39, of Lake Wales, were arrested on a Lake County warrant in connection to grave thefts at Edgewood Cemetery in Mount Dora on Dec. 6, 2020. Crime scene investigators with Lake County Sheriff's Office found cigars at the scene that were sent off for DNA testing, according to reports.

One of the samples came back as a match for Tolentino who has a criminal record that includes arrests for cocaine possession, possession of drugs with intent to distribute, grand theft and armed bank robbery in 2000. The PCSO was notified on Jan. 6 and executed a search warrant for Tolentino's DNA to compare to the sample. Burgos-Lopez did not have a prior criminal record but spent time as a police officer in Puerto Rico, telling deputies that he left because the department was corrupt. During the interview with deputies, Tolentino confessed that he had an accomplice and named Burgos-Lopez, reports said.

PCSO deputies executed a search warrant on Jan. 6 for Burgos-Lopez's address, 5170 Timberlane Road in Lake Wales. There they discovered a shed that contained a religious shrine that contained seven skulls. Four of the skulls were human remains identified to have come from the Mount Dora cemetery, two were determined to be fake and there is still one human skull under investigation to determine where it came from. Along with the skulls, deputies also found other human remains and various animal skulls including the head of a baby alligator, reports said.

"This is a black magic art that needs body parts in order to worship," Polk County Sheriff Grady Judd said Friday in a press conference. "They prefer to have skulls."

Tolentino and Burgos-Lopez told deputies that their religion, Palo Mayombe, uses human remains and demands the remains be from individuals who have "done something heroic." In a press conference Friday afternoon, Judd said that Palo Mayombe is considered the "evil twin" of Santeria. The suspects told deputies that they pried open the graves with a crowbar and removed the heads and other remains, placing them in plastic bags to transport back to Lake Wales to be placed in the shrine. They also left orange peels in place of the heads as part of the ritual, according to reports.

"Three of the four graves were veterans of the military," Judd said. "They in fact were heroes."

Burgos-Lopez is part owner in two businesses in Winter Haven, Bushikan Karate and Botanica Vititi, which sells herbs and oils including items used in Palo Mayombe rituals. Burgos-Lopez calls himself a Tata, or religious leader. In YouTube videos made by Burgos-Lopez that discuss different rituals of the religion, he discusses how it is difficult to procure human remains in the United States but common in Cuba. On social media, Burgos-Lopez refers to cemeteries as holy sites and shopping centers, according to reports.

Burgos-Lopez was booked into the Polk County Jail on Thursday, Jan. 7 on four counts of abuse of a dead body and four counts of disturbing the contents of a grave, charges from the Lake County Warrant. He is also charged in Polk County for one count of buy/sell/traffic dead bodies and one count of disturbing the contents of a grave. Bond was set at $45,500. He bonded out on Friday, Jan. 8.

A crash involving a bicyclist and a sedan ended in the death of the cyclist Thursday evening.

AVON PARK — An unidentified man, 39, of Sebring, died in a bicycle crash with a sedan-type vehicle on Thursday about 6:20 p.m. The driver of the sedan did not have any injuries.

The Florida Highway Patrol gave limited details in a press release on Friday. In 2020, FHP changed its policy and does not give out names of those involved in wrecks until the supervisors have all signed off on the final report. The process can take several months.

The driver was wearing a seat belt. The bicyclist was not wearing a helmet.

Scott Allan Daniel, 52, of Sebring, was pronounced dead on Tuesday, Jan. 5, at a Washington hospital, as reported by The Bay Net newspaper. TBN reported that Daniel was driving his 2001 PT Cruiser on Maryland Route 257, also known as Rock Point Road on Dec. 24 at about 3:40 a.m.

The report shows Daniel was traveling north when, for an unknown reason, Daniel left the roadway and hit a “ditch/culvert.” Daniel’s Cruiser went airborne and overturned. He was airlifted to MedStar Washington Hospital Center in Washington D.C. for treatment of life-threatening injuries.

A Sebring man has been identified as the victim of a Nov. 5 fatal crash at U.S. 27 south of Thunderbird Road, according to the finalized FHP report.

The report states a Ryder rental truck was headed southbound on U.S. 27 in the center lane, while David Wayne-Joseph Harrison, 23, of Sebring, was in the grassy median. Harrison attempted to cross the southbound lanes and came out into the “immediate” path of the Ryder truck.

The truck hit Harrison and came to a stop near the collision point. Harrison traveled south and came to rest in the center lane.

Harrison died despite being transported to Lakeland Regional Medical Center for treatment.

SEBRING — Sports events may help places like Highlands County, hit hard by COVID-19 in 2020, to hold onto its tourist economy, according to the county’s destination marketing and management staff.

Casey Hartt, lead marketer for the Tourist Development Council, branded as “VisitSebring,” told the Board of County Commission in her end-of-year recap that a couple of sports-related events in 2020 helped recover some of the tourist tax revenue that the county expected to lose to the pandemic.

“Many destinations are looking at sports tourism. They’re one of the first segments to return to travel,” Hartt said. “If you think about it, you may not be ready to take that leisure trip, but if your [child] is playing a soccer tournament somewhere else, or a baseball tournament or whatever — disk golf — you might be, ‘I’ll go ahead and travel for that.’”

She said 2020 saw four new sports events come into the county, including the Gran Fondo New York (GFNY) international cycling marathon in October and the Expedition Florida Adventure Race at the end of December. Hartt said those events and others came in during slow months when the county needs tourism funds.

Last year, the TDC had a record high 20% increase in tourist tax collection, indicating a high number of people staying short-term in the county, through February. Starting in March 2020, Hartt said, the county had an overall decrease of 14%, mainly because of the loss — via an eight-month delay — of the annual 12 Hours of Sebring.

“That was our biggest hit,” Hartt said. “However, I will say, that a decrease of 14% in the year of COVID was not so bad.”

Hartt told commissioners that a large part of destination marketing now is “destination management,” which involves promoting and developing those aspects of a destination that visitors are more interested in enjoying. Lakes might be known for fishing or the Sebring International Raceway might be known for the 12 Hours, but Hartt said the TDC needs to help provide ways to enjoy these places in other ways, such the raceway offering tours.

It’s equally important, Hartt said, to reach out to the community to show permanent residents how a drop in tourism affects them directly, which it did as a result of fewer visitors during the COVID-19 pandemic. Travel priorities have changed now because of the virus, she said, and tourist destinations have to adjust and adapt to that.

Marketing now is done mostly through digital media, Hartt said, because that’s where people research destinations. It’s also easier to track in terms of how many people have seen and utilized an ad to decide on their vacation destination, she said.

She said the TDC has also held stakeholder meetings to find out how the TDC might better help them promote their events and/or businesses.

Hartt also wanted residents to remember that they don’t pay the tax. It’s paid by people who stay seasonally or short-term — six months or less — in rental property or lodging. That tax helps pay to promote the area to out-of-county, out-of-state and international visitors to tell them what the area has to offer in entertainment, shopping, lodging, events, recreation and relaxation.

The next TDC meeting will be 8:15 a.m. Jan. 28, where Hartt will give a quarterly marketing report.