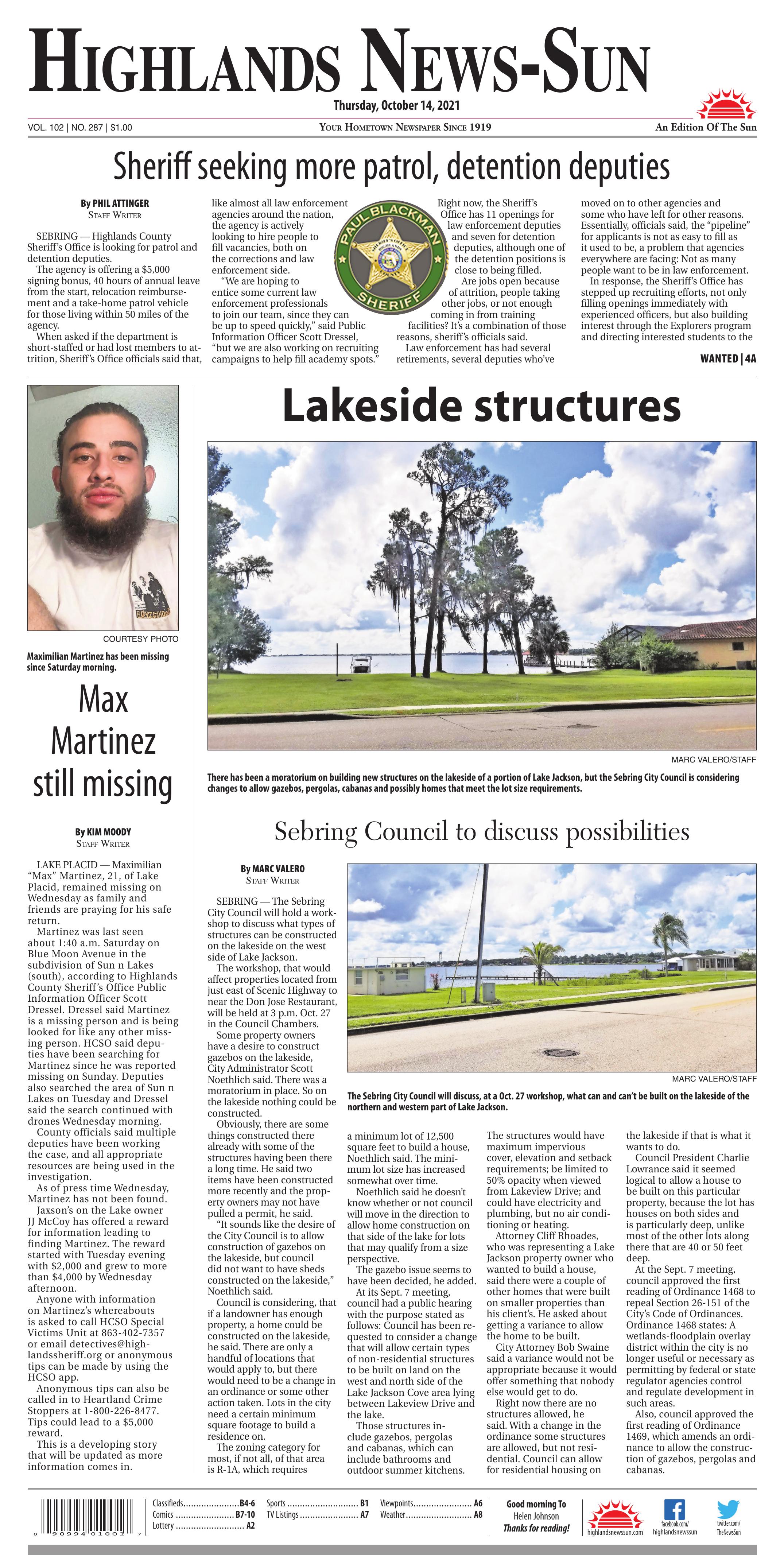 The agency is offering a $5,000 signing bonus, 40 hours of annual leave from the start, relocation reimbursement and a take-home patrol vehicle for those living within 50 miles of the agency.

When asked if the department is short-staffed or had lost members to attrition, Sheriff’s Office officials said that, like almost all law enforcement agencies around the nation, the agency is actively looking to hire people to fill vacancies, both on the corrections and law enforcement side.

“We are hoping to entice some current law enforcement professionals to join our team, since they can be up to speed quickly,” said Public Information Officer Scott Dressel, “but we are also working on recruiting campaigns to help fill academy spots.”

Right now, the Sheriff’s Office has 11 openings for law enforcement deputies and seven for detention deputies, although one of the detention positions is close to being filled.

Are jobs open because of attrition, people taking other jobs, or not enough coming in from training facilities? It’s a combination of those reasons, sheriff’s officials said.

Law enforcement has had several retirements, several deputies who’ve moved on to other agencies and some who have left for other reasons. Essentially, officials said, the “pipeline” for applicants is not as easy to fill as it used to be, a problem that agencies everywhere are facing: Not as many people want to be in law enforcement.

In response, the Sheriff’s Office has stepped up recruiting efforts, not only filling openings immediately with experienced officers, but also building interest through the Explorers program and directing interested students to the Law Enforcement Academy at South Florida State College.

At the Highlands County Jail, Major Tim Lethbridge said, via email, that attrition is part of it, with people retiring or moving on to other jobs. However, detention also has deputies regularly transfer to law enforcement, he said, where they can utilize experience with verbal control techniques and familiarity with regular guests of the jail.

In addition, Lethbridge said, very few people go through the corrections academy without already being hired or employed by a facility. As a result, the Highlands County Jail regularly looks for people in the jail’s food service or detention support officers to attend the academy and move up to deputy positions. Scholarships are available, he said.

Sheriff Paul Blackman said that in 28 years of working for the Sheriff’s Office, he has never seen a time when the agency didn’t have job openings.

“It’s just the nature of the profession that there is always going to be attrition,” Blackman said. “COVID(-19) did not help matters either, since we were already dealing with open positions.”

Blackman said he is moving people around from other units to patrol shifts, but that’s not unusual. It’s done every April when patrol deputies have to spend time in annual training.

As for the Jail, which Blackman administered before becoming sheriff, Lethbridge said the facility is large enough — capacity for up to approximately 500 inmates — that it always has openings, as well as an on-call schedule, which is utilized frequently.

“I have been [the] jail administrator for five years now and I don’t think we have ever been full in that time frame,” Lethbridge said. “We were down to two vacancies early this year. During the delta wave, as people were out sick, our deputies and all the other detention staff stepped up, filled every schedule hole, and met every need.”

He said there were a few times when almost half the shift was on overtime.

“But we have a great team here and they got the job done,” Lethbridge said.

The Sebring City Council will discuss, at a Oct. 27 workshop, what can and can’t be built on the lakeside of the northern and western part of Lake Jackson.

There has been a moratorium on building new structures on the lakeside of a portion of Lake Jackson, but the Sebring City Council is considering changes to allow gazebos, pergolas, cabanas and possibly homes that meet the lot size requirements.

SEBRING — The Sebring City Council will hold a workshop to discuss what types of structures can be constructed on the lakeside on the west side of Lake Jackson.

The workshop, that would affect properties located from just east of Scenic Highway to near the Don Jose Restaurant, will be held at 3 p.m. Oct. 27 in the Council Chambers.

Some property owners have a desire to construct gazebos on the lakeside, City Administrator Scott Noethlich said. There was a moratorium in place. So on the lakeside nothing could be constructed.

Obviously, there are some things constructed there already with some of the structures having been there a long time. He said two items have been constructed more recently and the property owners may not have pulled a permit, he said.

Council is considering, that if a landowner has enough property, a home could be constructed on the lakeside, he said. There are only a handful of locations that would apply to, but there would need to be a change in an ordinance or some other action taken. Lots in the city need a certain minimum square footage to build a residence on.

The zoning category for most, if not all, of that area is R-1A, which requires a minimum lot of 12,500 square feet to build a house, Noethlich said. The minimum lot size has increased somewhat over time.

Noethlich said he doesn’t know whether or not council will move in the direction to allow home construction on that side of the lake for lots that may qualify from a size perspective.

The gazebo issue seems to have been decided, he added.

At its Sept. 7 meeting, council had a public hearing with the purpose stated as follows: Council has been requested to consider a change that will allow certain types of non-residential structures to be built on land on the west and north side of the Lake Jackson Cove area lying between Lakeview Drive and the lake.

Those structures include gazebos, pergolas and cabanas, which can include bathrooms and outdoor summer kitchens. The structures would have maximum impervious cover, elevation and setback requirements; be limited to 50% opacity when viewed from Lakeview Drive; and could have electricity and plumbing, but no air conditioning or heating.

Attorney Cliff Rhoades, who was representing a Lake Jackson property owner who wanted to build a house, said there were a couple of other homes that were built on smaller properties than his client’s. He asked about getting a variance to allow the home to be built.

City Attorney Bob Swaine said a variance would not be appropriate because it would offer something that nobody else would get to do.

Right now there are no structures allowed, he said. With a change in the ordinance some structures are allowed, but not residential. Council can allow for residential housing on the lakeside if that is what it wants to do.

Council President Charlie Lowrance said it seemed logical to allow a house to be built on this particular property, because the lot has houses on both sides and is particularly deep, unlike most of the other lots along there that are 40 or 50 feet deep.

At the Sept. 7 meeting, council approved the first reading of Ordinance 1468 to repeal Section 26-151 of the City’s Code of Ordinances. Ordinance 1468 states: A wetlands-floodplain overlay district within the city is no longer useful or necessary as permitting by federal or state regulator agencies control and regulate development in such areas.

Also, council approved the first reading of Ordinance 1469, which amends an ordinance to allow the construction of gazebos, pergolas and cabanas.

A body found in the Sun n Lakes neighborhood of Lake Placid could be that of missing Maximilian Martinez.

LAKE PLACID — Maximilian “Max” Martinez, 21, of Lake Placid, remained missing on Wednesday as family and friends are praying for his safe return.

Martinez was last seen about 1:40 a.m. Saturday on Blue Moon Avenue in the subdivision of Sun n Lakes (south), according to Highlands County Sheriff’s Office Public Information Officer Scott Dressel. Dressel said Martinez is a missing person and is being looked for like any other missing person. HCSO said deputies have been searching for Martinez since he was reported missing on Sunday. Deputies also searched the area of Sun n Lakes on Tuesday and Dressel said the search continued with drones Wednesday morning.

County officials said multiple deputies have been working the case, and all appropriate resources are being used in the investigation.

As of press time Wednesday, Martinez has not been found.

Jaxson’s on the Lake owner JJ McCoy has offered a reward for information leading to finding Martinez. The reward started with Tuesday evening with $2,000 and grew to more than $4,000 by Wednesday afternoon.

Anyone with information on Martinez’s whereabouts is asked to call HCSO Special Victims Unit at 863-402-7357 or email detectives@highlandssheriff.org or anonymous tips can be made by using the HCSO app.

This is a developing story that will be updated as more information comes in.