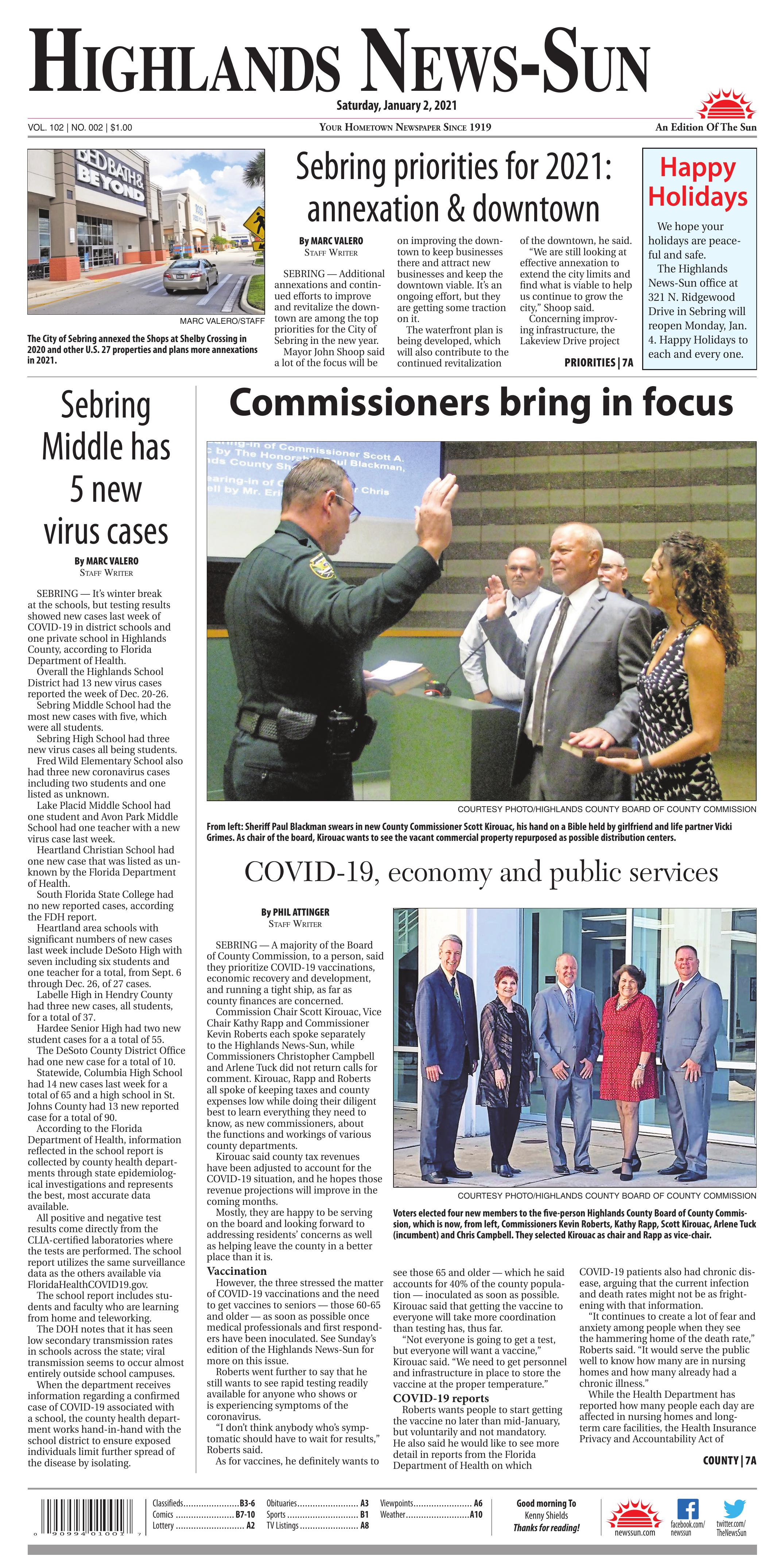 The City of Sebring annexed the Shops at Shelby Crossing in 2020 and other U.S. 27 properties and plans more annexations in 2021.

SEBRING — Additional annexations and continued efforts to improve and revitalize the downtown are among the top priorities for the City of Sebring in the new year.

Mayor John Shoop said a lot of the focus will be on improving the downtown to keep businesses there and attract new businesses and keep the downtown viable. It’s an ongoing effort, but they are getting some traction on it.

The waterfront plan is being developed, which will also contribute to the continued revitalization of the downtown, he said.

“We are still looking at effective annexation to extend the city limits and find what is viable to help us continue to grow the city,” Shoop said.

Concerning improving infrastructure, the Lakeview Drive project will be a major project for the city, he said.

The West Lakeview infrastructure project/upgrade will address numerous failing drainage systems and culverts crossing the roadway and damaging the road. He said the upgrade will correct the lack of treatment prior to going into Lake Jackson.

The planned upgrades encompass about 2.7 miles of Lakeview Drive from U.S. 27 to Fairmount Lane, which is just west of Scenic Highway

Another priority would be how to effectively extend, beyond the city limits, the city’s sewer and water utility services, Shoop said.

Councilman Tom Dettman noted the city just finished its first round of annexations and will probably be looking at additional properties to annex.

The rising costs of health insurance is an ongoing challenge for many businesses including the city, he noted.

“We struggle with the cost of healthcare insurance for our employees and things like that and we have to do some increases as far as their contributions, which is a very difficult thing to do in an economy with the cost of living index still pretty low and they have to take additional money out of their pockets,” he said.

It makes it very difficult for the council to make those decisions as well, because they want to treat their employees well, Dettman said.

“We are not unique in that situation. Everybody struggles with the same thing,” he said.

As for other priorities for the new year, Dettman said, “Until we see how the economy goes, especially the COVID situation and things get back to the ‘new normal,’ it is going to be a little bit difficult to say.”

Also, the City Council approved four annexation ordinances extending the city limits to include many businesses on U.S. 27 North.

From left: Sheriff Paul Blackman swears in new County Commissioner Scott Kirouac, his hand on a Bible held by girlfriend and life partner Vicki Grimes. As chair of the board, Kirouac wants to see the vacant commercial property repurposed as possible distribution centers.

SEBRING — A majority of the Board of County Commission, to a person, said they prioritize COVID-19 vaccinations, economic recovery and development, and running a tight ship, as far as county finances are concerned.

Commission Chair Scott Kirouac, Vice Chair Kathy Rapp and Commissioner Kevin Roberts each spoke separately to the Highlands News-Sun, while Commissioners Christopher Campbell and Arlene Tuck did not return calls for comment. Kirouac, Rapp and Roberts all spoke of keeping taxes and county expenses low while doing their diligent best to learn everything they need to know, as new commissioners, about the functions and workings of various county departments.

Kirouac said county tax revenues have been adjusted to account for the COVID-19 situation, and he hopes those revenue projections will improve in the coming months.

Mostly, they are happy to be serving on the board and looking forward to addressing residents’ concerns as well as helping leave the county in a better place than it is.

However, the three stressed the matter of COVID-19 vaccinations and the need to get vaccines to seniors — those 60-65 and older — as soon as possible once medical professionals and first responders have been inoculated. See Sunday’s edition of the Highlands News-Sun for more on this issue.

Roberts went further to say that he still wants to see rapid testing readily available for anyone who shows or is experiencing symptoms of the coronavirus.

“I don’t think anybody who’s symptomatic should have to wait for results,” Roberts said.

As for vaccines, he definitely wants to see those 65 and older — which he said accounts for 40% of the county population — inoculated as soon as possible. Kirouac said that getting the vaccine to everyone will take more coordination than testing has, thus far.

“Not everyone is going to get a test, but everyone will want a vaccine,” Kirouac said. “We need to get personnel and infrastructure in place to store the vaccine at the proper temperature.”

Roberts wants people to start getting the vaccine no later than mid-January, but voluntarily and not mandatory. He also said he would like to see more detail in reports from the Florida Department of Health on which COVID-19 patients also had chronic disease, arguing that the current infection and death rates might not be as frightening with that information.

“It continues to create a lot of fear and anxiety among people when they see the hammering home of the death rate,” Roberts said. “It would serve the public well to know how many are in nursing homes and how many already had a chronic illness.”

While the Health Department has reported how many people each day are affected in nursing homes and long-term care facilities, the Health Insurance Privacy and Accountability Act of 1996 (HIPAA) precludes release of personal health information on patients, without their approval.

Roberts said he had four friends die from COVID-19, and some had such illnesses as chronic obstructive pulmonary disease, but he also said his own chronic conditions — including two bouts with cancer and hemochromatosis, a buildup of iron in the blood — did not hurt his chances when he got COVID-19 in the last two weeks of his election campaign.

He was “sidelined” for 10 days with symptoms, quarantine and treatment, and his family did a socially-distanced election watch party in his backyard on Nov. 3, Roberts said, but he also said his doctor gave him a 99.5% chance of survival.

“Praise the Lord, I took the medicine and went back to doing my job,” Roberts said. “Not everybody who gets COVID-19 is going to die. I think there is a high survival rate.”

Roberts said he wants to ensure the county retains existing businesses, and also expressed a wish to “see the whole pandemic thing behind us, because I think that has stifled economic growth.”

Both Rapp and Kirouac would like to see the county work with the owners of Lakeshore Mall to see if the empty retail spaces can be repurposed for distribution or other businesses. It was a point in Kirouac’s campaign.

Kirouac also said the county’s relationship with Waste Connections, the county garbage and recycling hauler, is “the big elephant in the room” that he wants to address.

Rapp, involved with the Historic Preservation Commission, also wants to see what the county can do to help preserve existing structures and not end up with a “hole in our downtown,” as with the demolition of Hotel Nan-Ces-O-Wee, which had fallen into terrible disrepair over the last 10-15 years.

Rapp also wants to tackle emergency services issues. In a three-year cycle of raising the cost to consumers, at 7% per year, she wants to make sure this commission follows the plan of former commissioners to look at the data and match the assessment to what’s needed. Right now, it’s a combined volunteer and paid service.

“We need to provide it at a decent cost to the customer,” Rapp said. “We have to balance a reasonable cost for the service provided.”

Roberts, in turn, wants to continue previous commissioners’ plans to look at selling Highlands Regional Medical Center and putting the proceeds toward a grant program for nonprofits.

“We should not be in the business of owning a hospital,” Roberts said.

We hope your holidays are peaceful and safe.

The Highlands News-Sun office at 321 N. Ridgewood Drive in Sebring will reopen Monday, Jan. 4. Happy Holidays to each and every one.

SEBRING — It’s winter break at the schools, but testing results showed new cases last week of COVID-19 in district schools and one private school in Highlands County, according to Florida Department of Health.

Sebring Middle School had the most new cases with five, which were all students.

Heartland Christian School had one new case that was listed as unknown by the Florida Department of Health.

South Florida State College had no new reported cases, according the FDH report.

Heartland area schools with significant numbers of new cases last week include DeSoto High with seven including six students and one teacher for a total, from Sept. 6 through Dec. 26, of 27 cases.

Labelle High in Hendry County had three new cases, all students, for a total of 37.

Hardee Senior High had two new student cases for a a total of 55.

The DeSoto County District Office had one new case for a total of 10.

Statewide, Columbia High School had 14 new cases last week for a total of 65 and a high school in St. Johns County had 13 new reported case for a total of 90.

According to the Florida Department of Health, information reflected in the school report is collected by county health departments through state epidemiological investigations and represents the best, most accurate data available.

All positive and negative test results come directly from the CLIA-certified laboratories where the tests are performed. The school report utilizes the same surveillance data as the others available via FloridaHealthCOVID19.gov.

The school report includes students and faculty who are learning from home and teleworking.

The DOH notes that it has seen low secondary transmission rates in schools across the state; viral transmission seems to occur almost entirely outside school campuses.

When the department receives information regarding a confirmed case of COVID-19 associated with a school, the county health department works hand-in-hand with the school district to ensure exposed individuals limit further spread of the disease by isolating.