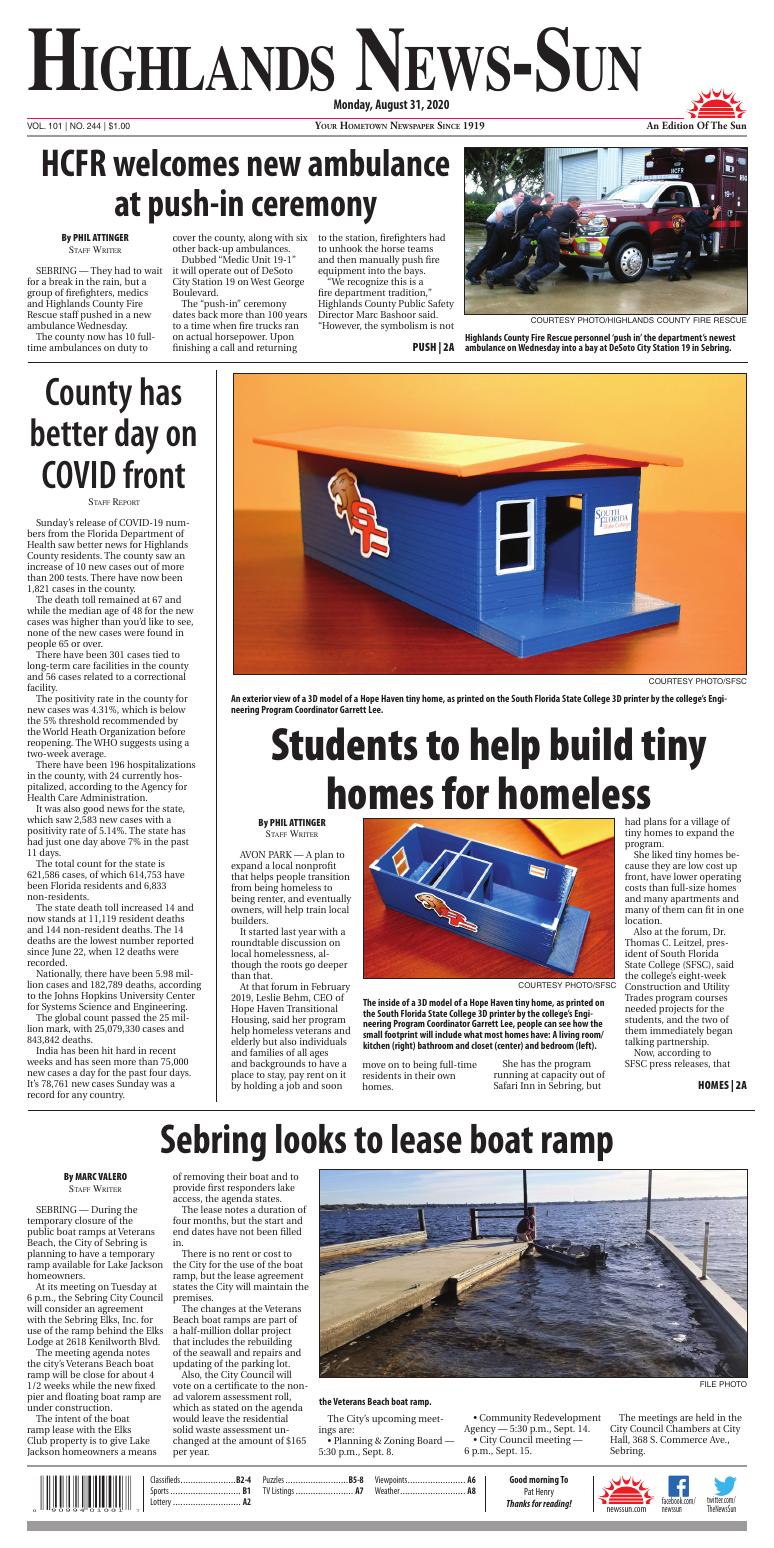 Highlands County Fire Rescue personnel ‘push in’ the department’s newest ambulance on Wednesday into a bay at DeSoto City Station 19 in Sebring.

SEBRING — They had to wait for a break in the rain, but a group of firefighters, medics and Highlands County Fire Rescue staff pushed in a new ambulance Wednesday.

The county now has 10 full-time ambulances on duty to cover the county, along with six other back-up ambulances.

Dubbed “Medic Unit 19-1” it will operate out of DeSoto City Station 19 on West George Boulevard.

The “push-in” ceremony dates back more than 100 years to a time when fire trucks ran on actual horsepower. Upon finishing a call and returning to the station, firefighters had to unhook the horse teams and then manually push fire equipment into the bays.

“We recognize this is a fire department tradition,” Highlands County Public Safety Director Marc Bashoor said. “However, the symbolism is not lost on us with this being the first new ambulance introduced into the combined Highlands County Fire Rescue Department.

“And yes, we had a paramedic inside the ambulance cab to guide the unit into the bay and brake if necessary during the push-in ceremony,” he said.

Fire Rescue expects another new medic unit, currently on the production line, to arrive in the next 45 days, Bashoor said.

He also plans for at least one more ambulance purchase in the 2020-21 fiscal year, which starts Oct. 1. It and three Power-LOAD systems are in the coming years’ budget.

New medic units have a Power-LOAD system, a battery-powered system that raises and lowers the patient and stretcher with the touch of a button and improves safety for the patient and operator by supporting the cot throughout the loading and unloading process.

Another piece of standard equipment is the powered ambulance stretcher, a battery-powered hydraulic system on the cot itself that raises and lowers the level of the touch of a button, which dramatically reduces strenuous lifting and the associated risk of back injury of moving patients on and off the cot.

“Before, where it took two to four people to lift a stretcher into an ambulance, now it takes one,” Bashoor said.

Medic 19-1 replaces a 1998 Chevy van-style ambulance with well over 200,000 miles, which was traded in with the new purchase agreement. Bashoor plans to trade in older ambulances, one by one, until all older-style units have left the fleet.

An exterior view of a 3D model of a Hope Haven tiny home, as printed on the South Florida State College 3D printer by the college’s Engineering Program Coordinator Garrett Lee.

The inside of a 3D model of a Hope Haven tiny home, as printed on the South Florida State College 3D printer by the college’s Engineering Program Coordinator Garrett Lee, people can see how the small footprint will include what most homes have: A living room/kitchen (right) bathroom and closet (center) and bedroom (left).

AVON PARK — A plan to expand a local nonprofit that helps people transition from being homeless to being renter, and eventually owners, will help train local builders.

It started last year with a roundtable discussion on local homelessness, although the roots go deeper than that.

At that forum in February 2019, Leslie Behm, CEO of Hope Haven Transitional Housing, said her program help homeless veterans and elderly but also individuals and families of all ages and backgrounds to have a place to stay, pay rent on it by holding a job and soon move on to being full-time residents in their own homes.

She has the program running at capacity out of Safari Inn in Sebring, but had plans for a village of tiny homes to expand the program.

She liked tiny homes because they are low cost up front, have lower operating costs than full-size homes and many apartments and many of them can fit in one location.

Now, according to SFSC press releases, that partnership has brought 3D printing technology into the mix, giving student builders a chance to work and rework ideas for the houses quickly, and help make construction that much faster and easier for all involved.

At the 2019 forum, Jane Beylinger of Hands for Homeless said that a “Point in Time Count” for homeless, volunteers identified 172 people living on the streets or in vacant, wooded areas. She expects the number is three times that.

Behm said all 26 rental units at Safari Inn stay full, with an average stay of six months, depending on a person or family’s situation, and a 95% success rate.

She gets 10-15 calls per day — every day — referring people for placement, which keeps Safari Inn filled. She’s wanted a way to move people into their own places.

“These homes will provide normalcy for them,” Behm said. “Everybody thinks that because someone is homeless, it’s because of drugs or alcohol. But that’s not the case for some of these people. Some have just fallen on hard times, and now with COVID-19, everyone’s fallen on bad times. For instance, we have families — mom and dad just lost their jobs, lost their home, and have nowhere else to go, so they’re out there.”

In early 2019, she had already started securing land for a community of miniature homes. On Oct. 1, 2019, the Highlands County Board of County Commission donated two parcels along EO Douglas Avenue in Sebring, just down the street from the Highlands County School District offices.

While tiny homes have become a niche form of housing for people of means wishing to downsize — featured on home design/decorating television shows — Hope Haven’s homes will be modest.

They’ll have everything any other home has: A living room, bedroom, bathroom and kitchen, but will be 386 square feet, and efficient.

“These homes will be something that my clients can afford,” Behm said.

“Several churches have stepped up and really provided a good backing,” she said.

The first eight homes, she said, will go to singles or couples only. After that, the next phase will have slightly larger tiny homes for families.

Fred Hayes, coordinator of SFSC’s Trades program, said the carpentry/roofing program began Aug. 3 and construction/electrical started Aug. 10. As each new class rotates through the program, they will spend time building for Hope Haven.

“Once the students get to the midpoint in their training, we should be able to spend time in the field working on these projects for about three or four weeks,” Hayes said.

Each new class will mean a four-week delay before students get back to working on the tiny house, but the first batch of students should be ready to go shortly.

The sites will be ready, Hayes said: Behm has promised the septic systems will be in place and students can begin pouring the concrete slabs.

“Then we’ll work on the framework, the rough structure, and do the drywall work, as well as build the roof, Hayes said. “The electrical class would do the electrical work on the inside, so this project benefits students in our Trade programs.”

As Behm goes out and explains the tiny house project to groups in the community, it helps to have visual aids. To assist her, SFSC Engineering Program Coordinator Garrett Lee used a 3D printer to make a miniaturized model.

“People can actually see the tiny house in a full 3D view and understand a little better than having to figure it out based on the plans and layout,” Lee said. “We were able to put together a prototype of the house in a couple of days. We printed the main body in one day and printed the roof another day, then put the two together.”

“In this case, we were able to come up with something and hit ‘print.’ The next day, you may want to tweak it a bit, hit ‘print,’ come back and check it again,” Lee said “To try to have this made out of something else would have been to do it with molding. You’d have to craft the dies and then it would be a month-long project. If something wasn’t right, you’d have to mold a whole new set of dyes.”

Behm said she’s talked to churches, Rotary clubs, and private groups that are interested, but want to know exactly what she’s talking about and want to see it.

“Garrett knocked the model out of the park,” Behm said. “The 3D tiny house model is small enough and lightweight enough that I can turn it around when I do presentations, and everybody will understand and see what I’m talking about.”

“It’s been hard work finding good people who understand the need and everything that has been donated. But I love what I do,” Behm added. “I just want to see it through and get this rolling and show everyone what we’re talking about.”

For detailed information on any of SFSC’s Construction and Utility Trades courses, see the catalog at southflorida.edu/corpedschedule, call 863-201-7195, or email corporatetraining@southflorida.edu.

SEBRING — During the temporary closure of the public boat ramps at Veterans Beach, the City of Sebring is planning to have a temporary ramp available for Lake Jackson homeowners.

At its meeting on Tuesday at 6 p.m., the Sebring City Council will consider an agreement with the Sebring Elks, Inc. for use of the ramp behind the Elks Lodge at 2618 Kenilworth Blvd.

The meeting agenda notes the city’s Veterans Beach boat ramp will be close for about 4 1/2 weeks while the new fixed pier and floating boat ramp are under construction.

The intent of the boat ramp lease with the Elks Club property is to give Lake Jackson homeowners a means of removing their boat and to provide first responders lake access, the agenda states.

The lease notes a duration of four months, but the start and end dates have not been filled in.

There is no rent or cost to the City for the use of the boat ramp, but the lease agreement states the City will maintain the premises.

The changes at the Veterans Beach boat ramps are part of a half-million dollar project that includes the rebuilding of the seawall and repairs and updating of the parking lot.

Also, the City Council will vote on a certificate to the non-ad valorem assessment roll, which as stated on the agenda would leave the residential solid waste assessment unchanged at the amount of $165 per year.

The City’s upcoming meetings are:

The meetings are held in the City Council Chambers at City Hall, 368 S. Commerce Ave., Sebring.

Sunday’s release of COVID-19 numbers from the Florida Department of Health saw better news for Highlands County residents. The county saw an increase of 10 new cases out of more than 200 tests. There have now been 1,821 cases in the county.

The death toll remained at 67 and while the median age of 48 for the new cases was higher than you’d like to see, none of the new cases were found in people 65 or over.

There have been 301 cases tied to long-term care facilities in the county and 56 cases related to a correctional facility.

The positivity rate in the county for new cases was 4.31%, which is below the 5% threshold recommended by the World Heath Organization before reopening. The WHO suggests using a two-week average.

There have been 196 hospitalizations in the county, with 24 currently hospitalized, according to the Agency for Health Care Administration.

The state death toll increased 14 and now stands at 11,119 resident deaths and 144 non-resident deaths. The 14 deaths are the lowest number reported since June 22, when 12 deaths were recorded.

Nationally, there have been 5.98 million cases and 182,789 deaths, according to the Johns Hopkins University Center for Systems Science and Engineering.

India has been hit hard in recent weeks and has seen more than 75,000 new cases a day for the past four days. It’s 78,761 new cases Sunday was a record for any country. 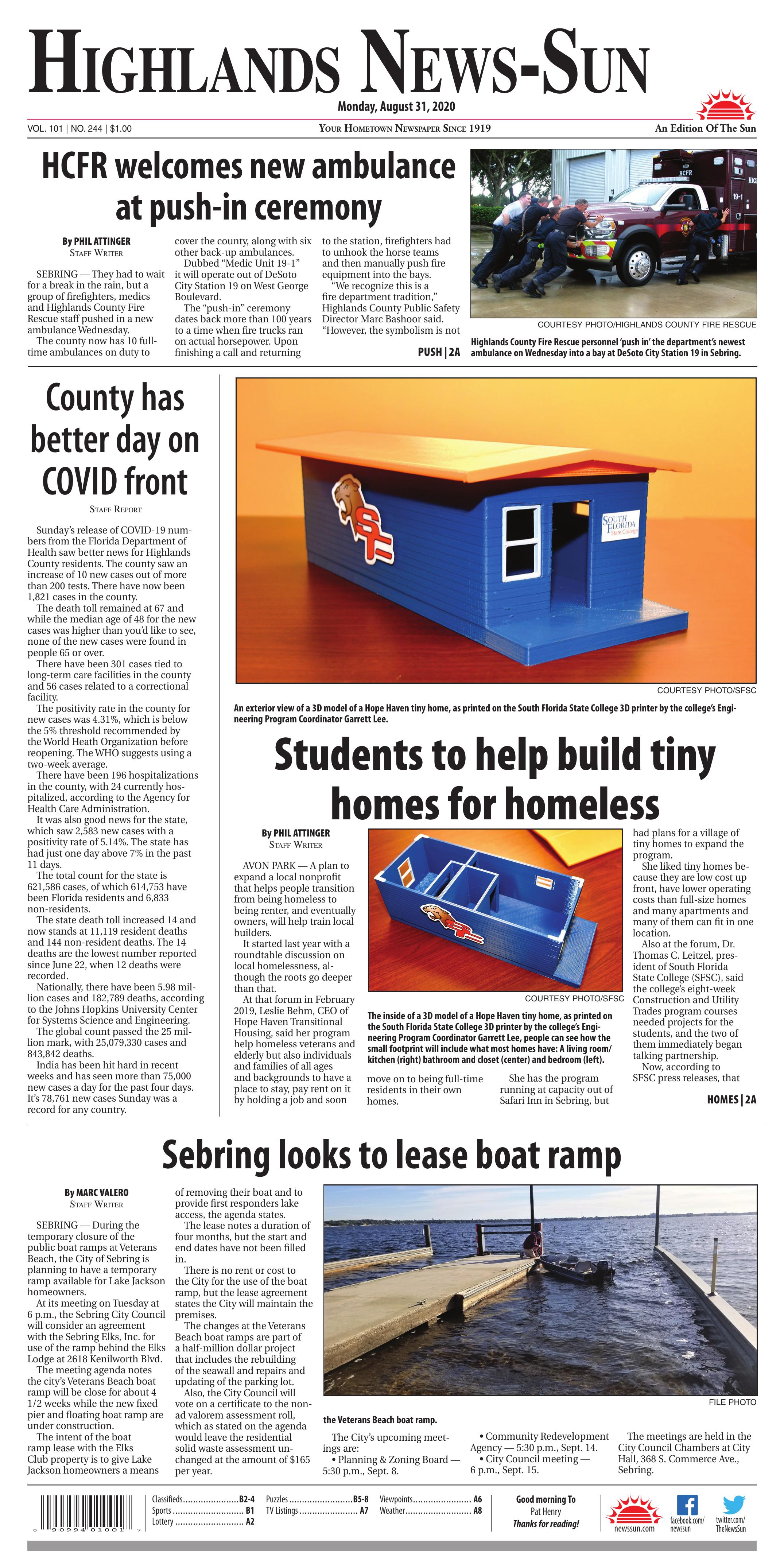