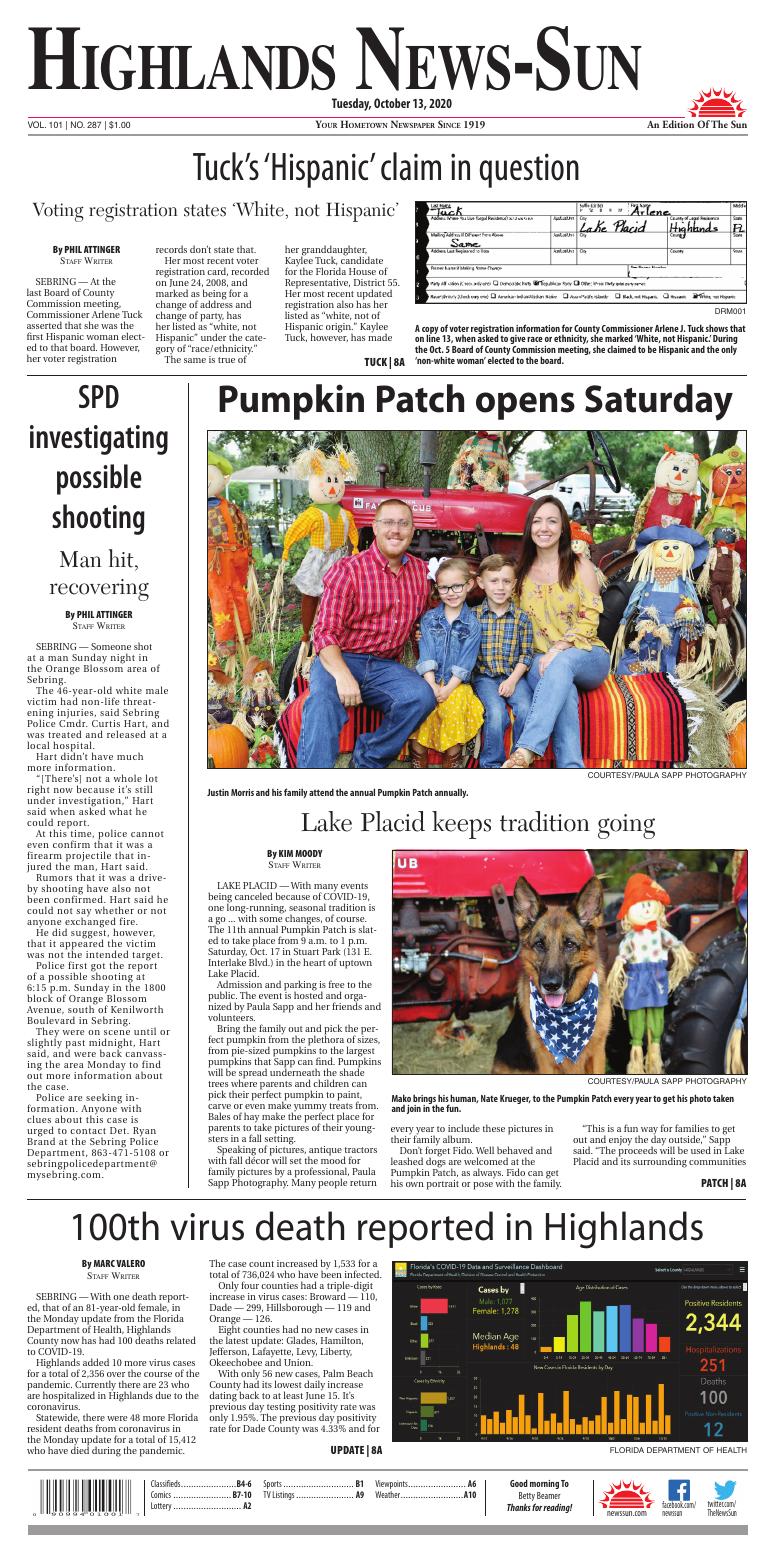 A copy of voter registration information for County Commissioner Arlene J. Tuck shows that on line 13, when asked to give race or ethnicity, she marked ‘White, not Hispanic.’ During the Oct. 5 Board of County Commission meeting, she claimed to be Hispanic and the only ‘non-white woman’ elected to the board.

SEBRING — At the last Board of County Commission meeting, Commissioner Arlene Tuck asserted that she was the first Hispanic woman elected to that board. However, her voter registration records don’t state that.

Her most recent voter registration card, recorded on June 24, 2008, and marked as being for a change of address and change of party, has her listed as “white, not Hispanic” under the category of “race/ethnicity.”

The same is true of her granddaughter, Kaylee Tuck, candidate for the Florida House of Representative, District 55. Her most recent updated registration also has her listed as “white, not of Hispanic origin.” Kaylee Tuck, however, has made no such claim of Hispanic heritage.

The Highlands News-Sun attempted to contact Arlene Tuck for comment Monday via text, telephone and email, but did not receive a reply prior to press time.

Merriam-Webster’s Dictionary defines “Hispanic” as “of, relating to or being a person of Latin American descent and especially of Cuban, Mexican, or Puerto Rican origin living in the United States,” as well as being “of or relating to the people, speech or culture of Spain.”

Tuck came under fire Oct. 5 when citizens spoke at the County Commission meeting about racially-charged posts on her social media account.

They came to say they didn’t believe Tuck could represent them after her social media page had displayed racially-charged memes over several months.

The meme that broke the issue showed up on the page late on Sept. 23, white letters on a purple background stating, “If Blacks now have their own National Anthem then they need their own welfare system paid for by Rich Black Athletes.”

It had been removed before morning, but members of the community had already gathered screenshots of that and similar posts, and added them to her page the next morning when she posted an explanation that she’d been hacked.

Tonya Marshall of Avon Park said when pages get hacked, people usually shut the page down or delete content.

“Your page is still up and the content is still sitting there,” Marshall said, “which leads me to believe that, one, it wasn’t hacked, and two, you know it’s there and you don’t care because you know nothing is going to happen to you, other than this.”

Tuck asserted that not only was she not racist, and would not take part in racist behavior, that she also understood how it felt to be on the receiving end.

“In fact, as a Hispanic woman, I fully understand racism,” Tuck said that morning. “I am the only non-white person to ever hold the (sic) office on this commission.

“I love the people of this county. During the past two years, I have devoted my life to making Highlands County a better, safer environment for all of the citizens,” Tuck continued.

She also said that she intended to continue working for all citizens in the county, as long as she serves.

“However, if you do not feel I am fulfilling my duties as a county commissioner, you are more than welcome to run against me in 2022,” Tuck added. “I will not be resigning, and God willing, I will be on the ballot in 2022.”

At that point, she then said she would have no more to say about the subject of the posts that day or in the future.

Shortly after her claim of Hispanic heritage, people in the community took to social media and public records to see if they could find information to prove her claim.

The Highlands News-Sun, through a public records request, was able to obtain copies of the most recent Highlands County voting records for Tuck and her granddaughter.

Records were not immediately available for her son, Andy Tuck, who serves on the Florida Board of Education and lives out of the county.

Homemade goodies are always a part of the annual Pumpkin Patch at Stuart Park. Gail Stein is seen here selling some of them at a previous event.

Mako brings his human, Nate Krueger, to the Pumpkin Patch every year to get his photo taken and join in the fun.

LAKE PLACID — With many events being canceled because of COVID-19, one long-running, seasonal tradition is a go ... with some changes, of course. The 11th annual Pumpkin Patch is slated to take place from 9 a.m. to 1 p.m. Saturday, Oct. 17 in Stuart Park (131 E. Interlake Blvd.) in the heart of uptown Lake Placid.

Admission and parking is free to the public. The event is hosted and organized by Paula Sapp and her friends and volunteers.

Bring the family out and pick the perfect pumpkin from the plethora of sizes, from pie-sized pumpkins to the largest pumpkins that Sapp can find. Pumpkins will be spread underneath the shade trees where parents and children can pick their perfect pumpkin to paint, carve or even make yummy treats from. Bales of hay make the perfect place for parents to take pictures of their youngsters in a fall setting.

Speaking of pictures, antique tractors with fall décor will set the mood for family pictures by a professional, Paula Sapp Photography. Many people return every year to include these pictures in their family album.

Don’t forget Fido. Well behaved and leashed dogs are welcomed at the Pumpkin Patch, as always. Fido can get his own portrait or pose with the family.

“This is a fun way for families to get out and enjoy the day outside,” Sapp said. “The proceeds will be used in Lake Placid and its surrounding communities as needs arise.”

Come hungry. Big appetites will be filled with grilled hamburgers, hot dogs and Frank Hartzell’s famous bratwursts (brats). Cool off with four flavors of snow-cones or munch on some fresh popcorn.

It wouldn’t be a Pumpkin Patch without the homemade goodies. Arrive early for the pumpkin bread, that always sells out first. Indulge in many other baked goods that will be priced from $1-4.

“I am making pumpkin dump cake this year. It’s going to give the pumpkin bread a run for its money.”

More family fun is on tap. Free games and prizes will be held throughout the park.

Face painting will have to wait until next year as a coronavirus precaution. Other precautions will be taken at the Pumpkin Path, according to Sapp. Gloves will be used, hand washing stations will be posted through the park as well as hand sanitizers, and social distancing will be observed. Masks are optional.

SEBRING — With one death reported, that of an 81-year-old female, in the Monday update from the Florida Department of Health, Highlands County now has had 100 deaths related to COVID-19.

Highlands added 10 more virus cases for a total of 2,356 over the course of the pandemic. Currently there are 23 who are hospitalized in Highlands due to the coronavirus.

If you feel you have symptoms of COVID-19, call the Health Department to be tested as soon as possible.

SEBRING — Someone shot at a man Sunday night in the Orange Blossom area of Sebring.

Hart didn’t have much more information.

“[There’s] not a whole lot right now because it’s still under investigation,” Hart said when asked what he could report.

At this time, police cannot even confirm that it was a firearm projectile that injured the man, Hart said.

Rumors that it was a drive-by shooting have also not been confirmed. Hart said he could not say whether or not anyone exchanged fire.

He did suggest, however, that it appeared the victim was not the intended target.

Police first got the report of a possible shooting at 6:15 p.m. Sunday in the 1800 block of Orange Blossom Avenue, south of Kenilworth Boulevard in Sebring.

They were on scene until or slightly past midnight, Hart said, and were back canvassing the area Monday to find out more information about the case.

Police are seeking information. Anyone with clues about this case is urged to contact Det. Ryan Brand at the Sebring Police Department, 863-471-5108 or sebringpolicedepartment@mysebring.com.