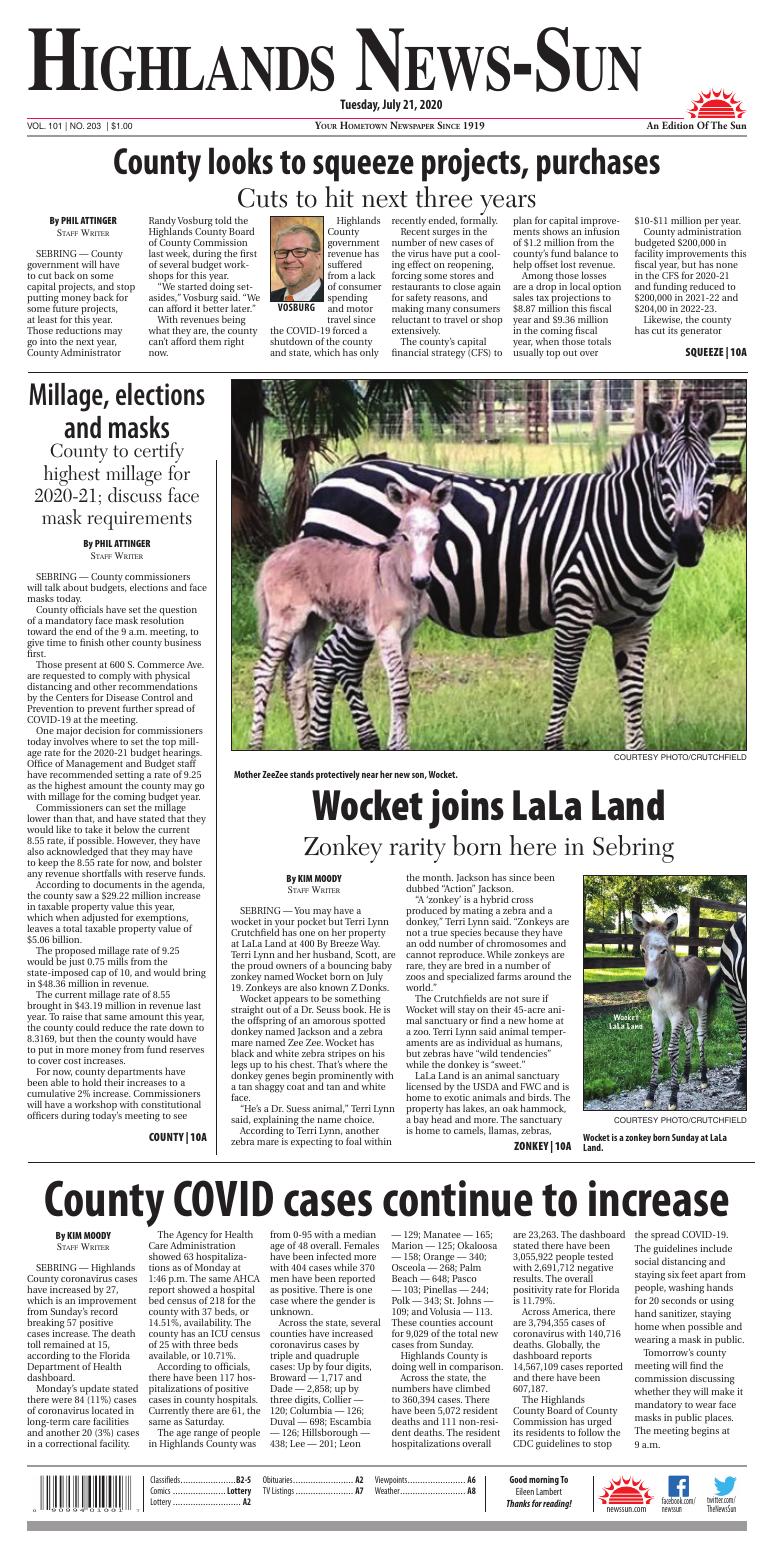 SEBRING — County government will have to cut back on some capital projects, and stop putting money back for some future projects, at least for this year. Those reductions may go into the next year, County Administrator Randy Vosburg told the Highlands County Board of County Commission last week, during the first of several budget workshops for this year.

“We started doing set-asides,” Vosburg said. “We can afford it better later.”

With revenues being what they are, the county can’t afford them right now.

Highlands County government revenue has suffered from a lack of consumer spending and motor travel since the COVID-19 forced a shutdown of the county and state, which has only recently ended, formally.

Recent surges in the number of new cases of the virus have put a cooling effect on reopening, forcing some stores and restaurants to close again for safety reasons, and making many consumers reluctant to travel or shop extensively.

The county’s capital financial strategy (CFS) to plan for capital improvements shows an infusion of $1.2 million from the county’s fund balance to help offset lost revenue.

Among those losses are a drop in local option sales tax projections to $8.87 million this fiscal year and $9.36 million in the coming fiscal year, when those totals usually top out over $10-$11 million per year.

Improvements of parks facilities and equipment will drop to $110,208 for the coming fiscal year — a 10% hit, Vosburg said. For future years, he restored funding and put in a mathematical multiplier formula to help recover from delayed maintenance in a few years.

However, while Vosburg has $104,000 in this year’s CFS budget for improvements to the Children’s Advocacy Center, he had to cut funding in the coming year.

There is partial funding for improvements at Highlands County Animal Services — $150,000 — but that project may cost more, Vosburg said.

Emergency Medical Services fleet replacement dropped from $275,000 this year to $251,680 in the coming year.

More than anything, Vosburg said, EMS crews need power-load gurneys, which ascend and descend from ambulances automatically, saving backs and time. He put $100,403 into the CFS for that in the coming year.

Cost for a new inmate work crew vehicle has been pushed out a year. Also, Vosburg said, payments for the Sheriff Office headquarters building won’t be paid this year, but amounts have been revised for the next three fiscal years to finish out the remaining $472,460.

Vosburg said the county has had difficulty getting contract crews to come into the county to do striping. Given the cost of those contracts, “I believe we’ll get a payback on that investment,” he said.

The Solid Waste fund saw the least impact from the COVID-19 shutdown: Garbage still got picked up or dumped at the landfill.

New money was put in for other solid waste equipment and buildings in 2021-22.

In transportation funding, the county reduced funding in 2020-21 to $2.34 million in road resurfacing, $630,000 for reconstruction/dirt road paving, $62,100 for ADA transition plan improvements and $50,000 for matching funds for drainage projects.

With so many dirt roads needing to be paved, Commissioner Arlene Tuck said she didn’t think $630,000 will make it.

Commissioner Jim Brooks said, in the last few years, there hasn’t been a whole lot of funding to do anything.

Vosburg said county officials hope to catch more roads and make repairs or resurfacing before they get to needing reconstruction.

“I’m talking about the ones that have big chunks falling off the sides of our roads,” Tuck said.

Tuck asked if the county could hold off on the Sebring Library roof, but Vosburg said there was already water damage.

She then asked if the county could put off the EOC, but Randy said the county right now can’t house everyone there with the distancing needed for a pandemic, and must use multiple facilities for emergency operations.

With Hurricane Irma in 2017, he said, they didn’t have enough room then, even without a pandemic.

Vosburg said he may bring back more changes to the commission later, such as buying some patrol cars on Oct. 1 and more of them in January.

Wocket is a zonkey born Sunday at LaLa Land.

“Action” Jackson is the father of the new zonkey, Wocket, at LaLa Land.

Walkabout Tours at LaLa Land are family friendly and interactive.

Scott and Terri Lynn Crutchfield with a couple of LaLa Land babies.

SEBRING — You may have a wocket in your pocket but Terri Lynn Crutchfield has one on her property at LaLa Land at 400 By Breeze Way. Terri Lynn and her husband, Scott, are the proud owners of a bouncing baby zonkey named Wocket born on July 19. Zonkeys are also known Z Donks.

Wocket appears to be something straight out of a Dr. Seuss book. He is the offspring of an amorous spotted donkey named Jackson and a zebra mare named Zee Zee. Wocket has black and white zebra stripes on his legs up to his chest. That’s where the donkey genes begin prominently with a tan shaggy coat and tan and white face.

According to Terri Lynn, another zebra mare is expecting to foal within the month. Jackson has since been dubbed “Action” Jackson.

“A ‘zonkey’ is a hybrid cross produced by mating a zebra and a donkey,” Terri Lynn said. “Zonkeys are not a true species because they have an odd number of chromosomes and cannot reproduce. While zonkeys are rare, they are bred in a number of zoos and specialized farms around the world.”

The Crutchfields are not sure if Wocket will stay on their 45-acre animal sanctuary or find a new home at a zoo. Terri Lynn said animal temperaments are as individual as humans, but zebras have “wild tendencies” while the donkey is “sweet.”

LaLa Land is an animal sanctuary licensed by the USDA and FWC and is home to exotic animals and birds. The property has lakes, an oak hammock, a bay head and more. The sanctuary is home to camels, llamas, zebras, wallabies, kangaroos, miniature horses, and a giant rabbit named Bugsy, to name just a few. It is also the home of TLC Therapy Hooves, a 501©3 that brings therapy animals and people together. TLC (Terri Lynn Crutchfiled) Therapy Hooves brings its animals and teams of volunteers to assisted living facilities and nursing homes for free.

Due to COVID-19, TLC Therapy Hooves is on hold.

LaLa Land is providing Walkabout Tours from 6-8 p.m. every other Saturday. The tour is guided and the chance to view and interact with these special animals is hard to beat.

“We wanted people to get out of the house and be safe,” Terri Lynn said. “It’s a wonderful time.”

The tour is about a mile. The Crutchfields invite families to bring a walking stick to enter into a contest. There is a prize for the best walking stick. Terri Lynn said to be creative.

The LaLa Land tour is only $10 and the proceeds go to TLC Therapy Hooves. The tours are limited to 50 people and have been selling out quickly. Terry Lynn said there is still space available for the Aug. 8 tour. Call 863-699-0777 for more information.

A closer look at the number of positive cases of coronavirus in Highlands County, according to the information released Monday from the Florida Department of Health.

SEBRING — Highlands County coronavirus cases have increased by 27, which is an improvement from Sunday’s record breaking 57 positive cases increase. The death toll remained at 15, according to the Florida Department of Health dashboard.

Monday’s update stated there were 84 (11%) cases of coronavirus located in long-term care facilities and another 20 (3%) cases in a correctional facility.

The Agency for Health Care Administration showed 63 hospitalizations as of Monday at 1:46 p.m. The same AHCA report showed a hospital bed census of 218 for the county with 37 beds, or 14.51%, availability. The county has an ICU census of 25 with three beds available, or 10.71%.

According to officials, there have been 117 hospitalizations of positive cases in county hospitals. Currently there are 61, the same as Saturday.

The age range of people in Highlands County was from 0-95 with a median age of 48 overall. Females have been infected more with 404 cases while 370 men have been reported as positive. There is one case where the gender is unknown.

The Highlands County Board of County Commission has urged its residents to follow the CDC guidelines to stop the spread COVID-19. The guidelines include social distancing and staying six feet apart from people, washing hands for 20 seconds or using hand sanitizer, staying home when possible and wearing a mask in public.

Tomorrow’s county meeting will find the commission discussing whether they will make it mandatory to wear face masks in public places. The meeting begins at 9 a.m.

County officials have set the question of a mandatory face mask resolution toward the end of the 9 a.m. meeting, to give time to finish other county business first.

Those present at 600 S. Commerce Ave. are requested to comply with physical distancing and other recommendations by the Centers for Disease Control and Prevention to prevent further spread of COVID-19 at the meeting.

One major decision for commissioners today involves where to set the top millage rate for the 2020-21 budget hearings. Office of Management and Budget staff have recommended setting a rate of 9.25 as the highest amount the county may go with millage for the coming budget year.

Commissioners can set the millage lower than that, and have stated that they would like to take it below the current 8.55 rate, if possible. However, they have also acknowledged that they may have to keep the 8.55 rate for now, and bolster any revenue shortfalls with reserve funds.

The current millage rate of 8.55 brought in $43.19 million in revenue last year. To raise that same amount this year, the county could reduce the rate down to 8.3169, but then the county would have to put in more money from fund reserves to cover cost increases.

For now, county departments have been able to hold their increases to a cumulative 2% increase. Commissioners will have a workshop with constitutional officers during today’s meeting to see if they can get the Highlands County Sheriff’s Office, Clerk of Courts, Supervisor of Elections, Tax Collector and Property Appraiser offices to do the same, collectively.

Among other items, the board will discuss and/or decide on:

- Appointment of a board member and alternate to the Canvassing Board for the 2020 general election.

Commissioners also have a proclamation to consider to commemorate the 100th anniversary of the 19th Amendment, which guaranteed women the right to vote. 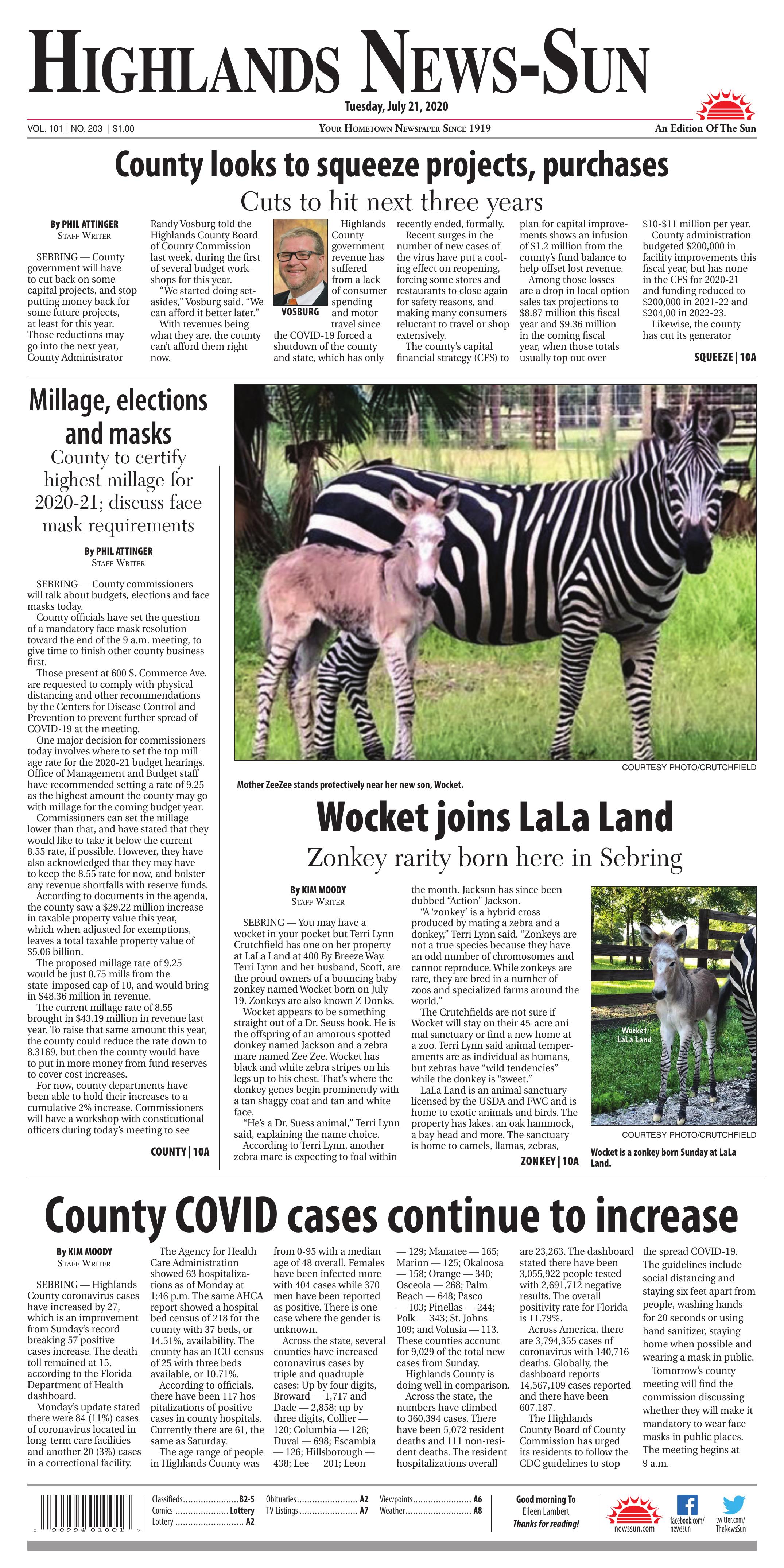