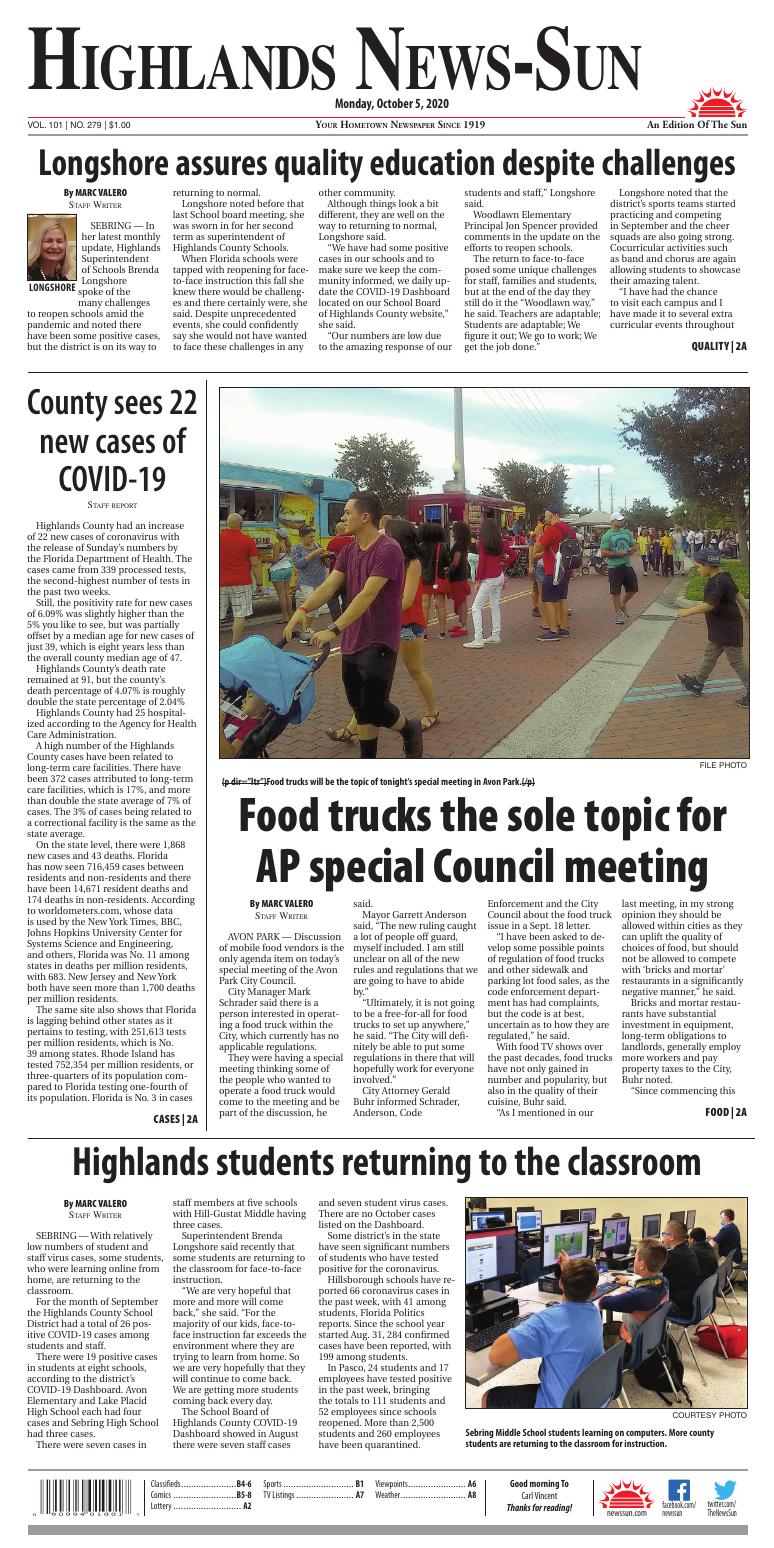 SEBRING — In her latest monthly update, Highlands Superintendent of Schools Brenda Longshore spoke of the many challenges to reopen schools amid the pandemic and noted there have been some positive cases, but the district is on its way to returning to normal.

Longshore noted before that last School board meeting, she was sworn in for her second term as superintendent of Highlands County Schools.

When Florida schools were tapped with reopening for face-to-face instruction this fall she knew there would be challenges and there certainly were, she said. Despite unprecedented events, she could confidently say she would not have wanted to face these challenges in any other community.

Although things look a bit different, they are well on the way to returning to normal, Longshore said.

“We have had some positive cases in our schools and to make sure we keep the community informed, we daily update the COVID-19 Dashboard located on our School Board of Highlands County website,” she said.

“Our numbers are low due to the amazing response of our students and staff,” Longshore said.

Woodlawn Elementary Principal Jon Spencer provided comments in the update on the efforts to reopen schools.

The return to face-to-face posed some unique challenges for staff, families and students, but at the end of the day they still do it the “Woodlawn way,” he said. Teachers are adaptable; Students are adaptable; We figure it out; We go to work; We get the job done.”

Longshore noted that the district’s sports teams started practicing and competing in September and the cheer squads are also going strong. Cocurricular activities such as band and chorus are again allowing students to showcase their amazing talent.

“I have had the chance to visit each campus and I have made it to several extra curricular events throughout the district so I know I am not alone in my excitement to see school returning to normal,” she said.

The reopening of schools like the reopening of communities is set in stages, the first priority was to provide strong academic instruction safely to students to minimize any learning gaps created by this spring’s nationwide school closure, Longshore said.

Then the focus was moved to sports and extracurricular activities so students have the opportunity to participate in events that make the school experience so enriching, she said.

“As we move forward we will examine other school aspects that have been limited due to the pandemic,” Longshore said. “We will continue to add school-related activates and expand on current activities when it is safe to do so.”

“It is such an honor to serve as superintendent of schools,” she said. “As I begin my second term I am confident no matter the challenges we face, we continue to provide quality education to the children of Highlands County.”

{p dir=”ltr”}Food trucks will be the topic of tonight’s special meeting in Avon Park.{/p}

AVON PARK — Discussion of mobile food vendors is the only agenda item on today’s special meeting of the Avon Park City Council.

City Manager Mark Schrader said there is a person interested in operating a food truck within the City, which currently has no applicable regulations.

They were having a special meeting thinking some of the people who wanted to operate a food truck would come to the meeting and be part of the discussion, he said.

Mayor Garrett Anderson said, “The new ruling caught a lot of people off guard, myself included. I am still unclear on all of the new rules and regulations that we are going to have to abide by.”

“Ultimately, it is not going to be a free-for-all for food trucks to set up anywhere,” he said. “The City will definitely be able to put some regulations in there that will hopefully work for everyone involved.”

“I have been asked to develop some possible points of regulation of food trucks and other sidewalk and parking lot food sales, as the code enforcement department has had complaints, but the code is at best, uncertain as to how they are regulated,” he said.

With food TV shows over the past decades, food trucks have not only gained in number and popularity, but also in the quality of their cuisine, Buhr said.

“As I mentioned in our last meeting, in my strong opinion they should be allowed within cities as they can uplift the quality of choices of food, but should not be allowed to compete with ‘bricks and mortar’ restaurants in a significantly negative manner,” he said.

“Since commencing this review, I have become aware of a 2020 Florida law put into effect in July limiting some of our powers of regulating food trucks, now defined by the State as “mobile food dispensing vehicles,” he said.

In June, Gov. Ron DeSantis issued a statement touting his approval of the deregulation bill (HB 1193), dubbed the “Occupational Freedom and Opportunity Act.” The bill makes regulatory changes related to professions ranging from hair braiders to interior designers and addresses issues such as local regulation of food trucks.

“For two years, we’ve pushed for regulatory reforms in Florida’s occupational licensing system to remove unnecessary barriers for individuals pursuing their professional aspirations,” DeSantis said. “With legislative and public support, we’re delivering on those reforms with a comprehensive and meaningful bill that will save thousands of Floridians both time and money for years to come.”

The City Council’s special meeting on mobile food vendors will be at 6 p.m., today in the Council Chambers, 123 E. Pine St, Avon Park.

SEBRING — With relatively low numbers of student and staff virus cases, some students, who were learning online from home, are returning to the classroom.

For the month of September the Highlands County School District had a total of 26 positive COVID-19 cases among students and staff.

There were 19 positive cases in students at eight schools, according to the district’s COVID-19 Dashboard. Avon Elementary and Lake Placid High School each had four cases and Sebring High School had three cases.

There were seven cases in staff members at five schools with Hill-Gustat Middle having three cases.

Superintendent Brenda Longshore said recently that some students are returning to the classroom for face-to-face instruction.

“We are very hopeful that more and more will come back,” she said. “For the majority of our kids, face-to-face instruction far exceeds the environment where they are trying to learn from home. So we are very hopefully that they will continue to come back. We are getting more students coming back every day.

The School Board of Highlands County COVID-19 Dashboard showed in August there were seven staff cases and seven student virus cases. There are no October cases listed on the Dashboard.

Some district’s in the state have seen significant numbers of students who have tested positive for the coronavirus.

Hillsborough schools have reported 66 coronavirus cases in the past week, with 41 among students, Florida Politics reports. Since the school year started Aug. 31, 284 confirmed cases have been reported, with 199 among students.

Highlands County had an increase of 22 new cases of coronavirus with the release of Sunday’s numbers by the Florida Department of Health. The cases came from 339 processed tests, the second-highest number of tests in the past two weeks.

Highlands County had 25 hospitalized according to the Agency for Health Care Administration.

On the state level, there were 1,868 new cases and 43 deaths. Florida has now seen 716,459 cases between residents and non-residents and there have been 14,671 resident deaths and 174 deaths in non-residents. According to worldometers.com, whose data is used by the New York Times, BBC, Johns Hopkins University Center for Systems Science and Engineering, and others, Florida was No. 11 among states in deaths per million residents, with 683. New Jersey and New York both have seen more than 1,700 deaths per million residents. 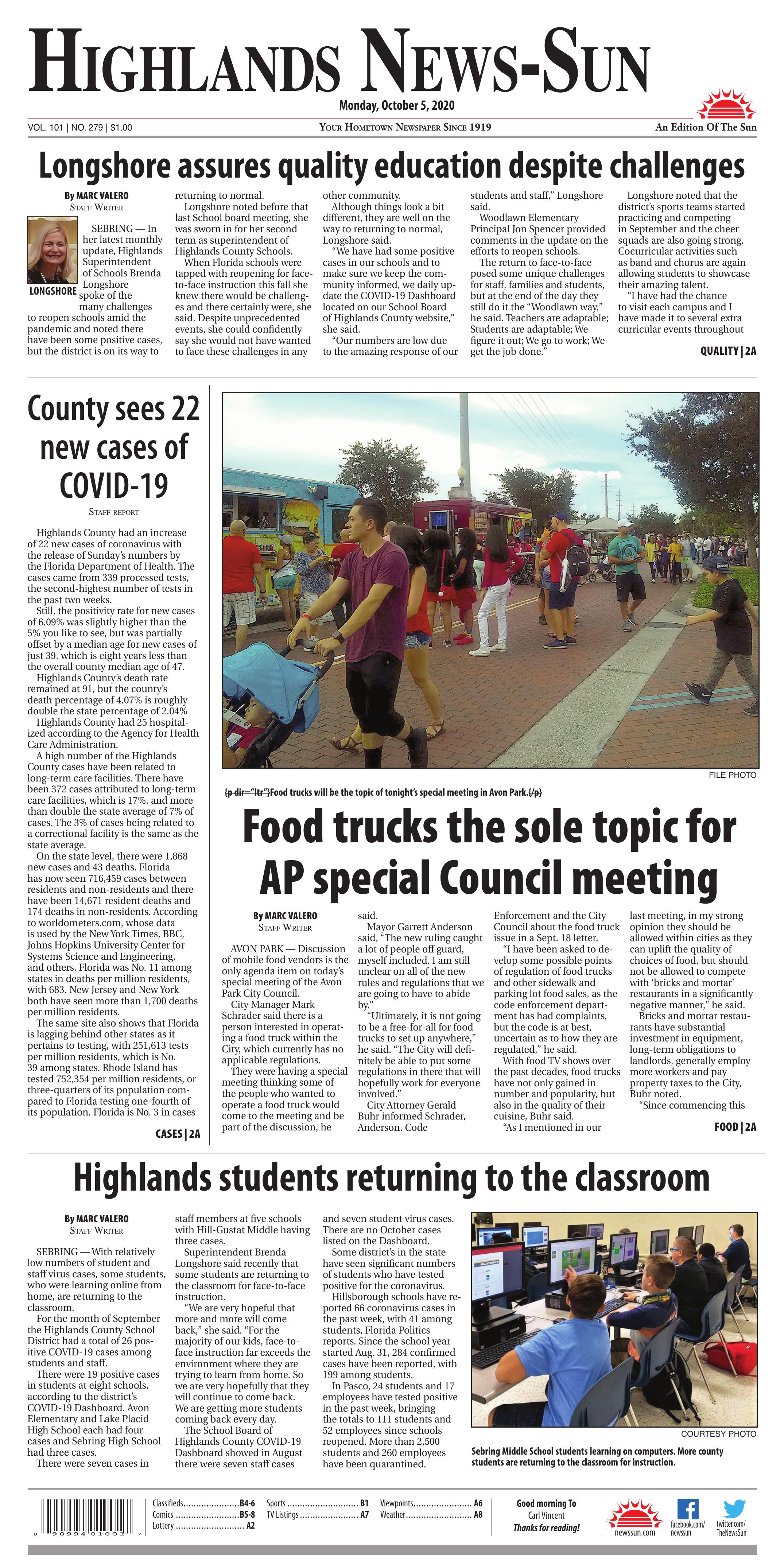