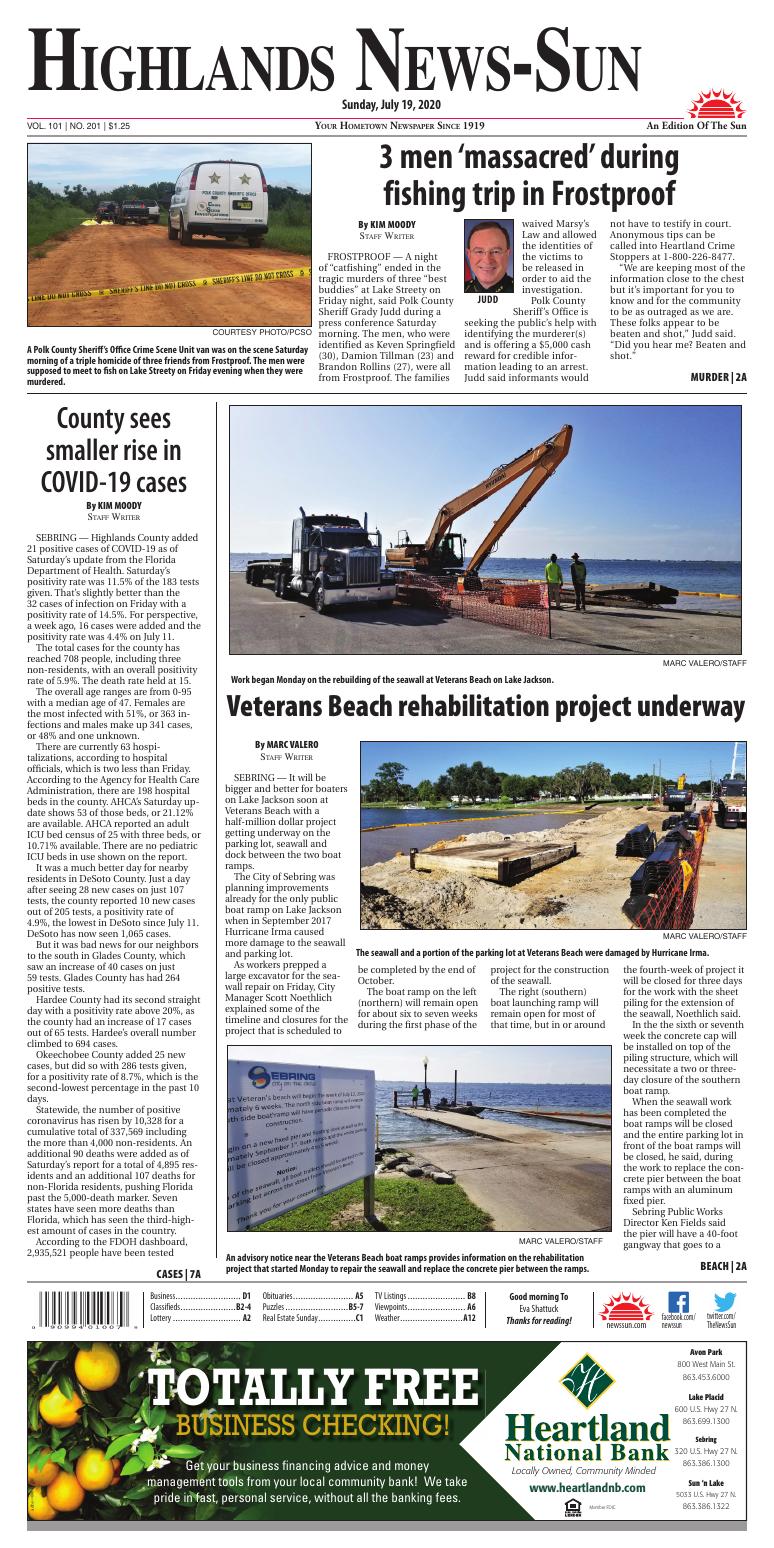 A Polk County Sheriff’s Office Crime Scene Unit van was on the scene Saturday morning of a triple homicide of three friends from Frostproof. The men were supposed to meet to fish on Lake Streety on Friday evening when they were murdered.

FROSTPROOF — A night of “catfishing” ended in the tragic murders of three “best buddies” at Lake Streety on Friday night, said Polk County Sheriff Grady Judd during a press conference Saturday morning. The men, who were identified as Keven Springfield (30), Damion Tillman (23) and Brandon Rollins (27), were all from Frostproof. The families waived Marsy’s Law and allowed the identities of the victims to be released in order to aid the investigation.

Polk County Sheriff’s Office is seeking the public’s help with identifying the murderer(s) and is offering a $5,000 cash reward for credible information leading to an arrest. Judd said informants would not have to testify in court. Anonymous tips can be called into Heartland Crime Stoppers at 1-800-226-8477.

“We are keeping most of the information close to the chest but it’s important for you to know and for the community to be as outraged as we are. These folks appear to be beaten and shot,” Judd said. “Did you hear me? Beaten and shot.”

Judd also said the crime scene was one of the worst he has ever been to, saying the men were not just murdered, they were “massacred.”

Judd also said he suspects more than one murderer in the safe, quaint and quiet country setting.

According to Judd, the three men have known each other for years and often spent time together socially. He explained that the three men were to meet at Streety Lake for “night fishing.” Judd said the area is very remote and called it the “middle of no place.”

Although subject to change, the sheriff explained the plan was for the three to meet up at the fishing area in two vehicles about 10 p.m. It appeared to PCSO that Tillman drove his red pickup truck arrived first. Judd said it “appeared that while the suspects were in the process of murdering Damion,” Rollins and Springfield drove up in a white pickup truck.

“They were shot up and ultimately murdered,” Judd said.

Rollins was able to call and wake up his dad with a plea for help. His father got up and drove the 10 minutes to the scene, forgetting his cell phone in the process. Judd said when he got to the scene, he was able to talk to his son before he died. PCSO is not releasing any conversation between father and son.

The father drove to a convenience store in Sun Ray and asked for help.

Judd said it was purely speculation that the victims knew their killer(s) because they were in a remote site filled with cow pastures and lakes.

“Our intuitiveness tells us you don’t just stumble upon somebody out here,” he said.

Judd said the murderers will be caught, jailed and held accountable. He asked for the community’s help to catch them sooner than later before they killed again. He stated they had nothing to lose.

Work began Monday on the rebuilding of the seawall at Veterans Beach on Lake Jackson.

The seawall and a portion of the parking lot at Veterans Beach were damaged by Hurricane Irma.

An advisory notice near the Veterans Beach boat ramps provides information on the rehabilitation project that started Monday to repair the seawall and replace the concrete pier between the ramps.

SEBRING — It will be bigger and better for boaters on Lake Jackson soon at Veterans Beach with a half-million dollar project getting underway on the parking lot, seawall and dock between the two boat ramps.

The City of Sebring was planning improvements already for the only public boat ramp on Lake Jackson when in September 2017 Hurricane Irma caused more damage to the seawall and parking lot.

As workers prepped a large excavator for the seawall repair on Friday, City Manager Scott Noethlich explained some of the timeline and closures for the project that is scheduled to be completed by the end of October.

The boat ramp on the left (northern) will remain open for about six to seven weeks during the first phase of the project for the construction of the seawall.

The right (southern) boat launching ramp will remain open for most of that time, but in or around the fourth-week of project it will be closed for three days for the work with the sheet piling for the extension of the seawall, Noethlich said.

In the the sixth or seventh week the concrete cap will be installed on top of the piling structure, which will necessitate a two or three-day closure of the southern boat ramp.

Sebring Public Works Director Ken Fields said the pier will have a 40-foot gangway that goes to a 60-foot floating dock that will also be made of aluminum.

Noethlich said the changes with the floating dock will make it much more convenient for boaters as they launch their crafts or return to the dock because the lake level changes will have little affect.

Now there are times with difficulties season to season with the changing elevation of the water.

The pier and floating dock work is estimated to take about four and a half weeks.

“Obliviously we are asking or the public’s patience especially during the time period when the boat ramps are going to be close in their entirety,” Noethlich said.

The parking lot will be enlarged and will have a wider turning area making it easier for the launching of the boats, he said. The truck and trailer spaces will be larger.

Fields said the lighting will also be improved

When the parking lot work is done the men’s and women’s bathrooms will under renovation during which time there will be portable restroom facilities for the park users, Fields said.

Loren Jock Trucking Inc. with the lowest bid of $357,355 will be performing the seawall rebuilding and dock replacement.

Excavation Point Inc. with a quote of $154,419 will be doing the parking lot improvements.

The total cases for the county has reached 708 people, including three non-residents, with an overall positivity rate of 5.9%. The death rate held at 15.

There are currently 63 hospitalizations, according to hospital officials, which is two less than Friday. According to the Agency for Health Care Administration, there are 198 hospital beds in the county. AHCA’s Saturday update shows 53 of those beds, or 21.12% are available. AHCA reported an adult ICU bed census of 25 with three beds, or 10.71% available. There are no pediatric ICU beds in use shown on the report.

It was a much better day for nearby residents in DeSoto County. Just a day after seeing 28 new cases on just 107 tests, the county reported 10 new cases out of 205 tests, a positivity rate of 4.9%, the lowest in DeSoto since July 11. DeSoto has now seen 1,065 cases.

But it was bad news for our neighbors to the south in Glades County, which saw an increase of 40 cases on just 59 tests. Glades County has had 264 positive tests.

Hardee County had its second straight day with a positivity rate above 20%, as the county had an increase of 17 cases out of 65 tests. Hardee’s overall number climbed to 694 cases.

Okeechobee County added 25 new cases, but did so with 286 tests given, for a positivity rate of 8.7%, which is the second-lowest percentage in the past 10 days.

Statewide, the number of positive coronavirus has risen by 10,328 for a cumulative total of 337,569 including the more than 4,000 non-residents. An additional 90 deaths were added as of Saturday’s report for a total of 4,895 residents and an additional 107 deaths for non-Florida residents, pushing Florida past the 5,000-death marker. Seven states have seen more deaths than Florida, which has seen the third-highest amount of cases in the country.

India and Mexico have seen recent outbreaks, as India had more new cases than any other country and only the United States and Brazil have seen more cases since the beginning of the pandemic. Mexico reported 736 new deaths, the highest of any country. 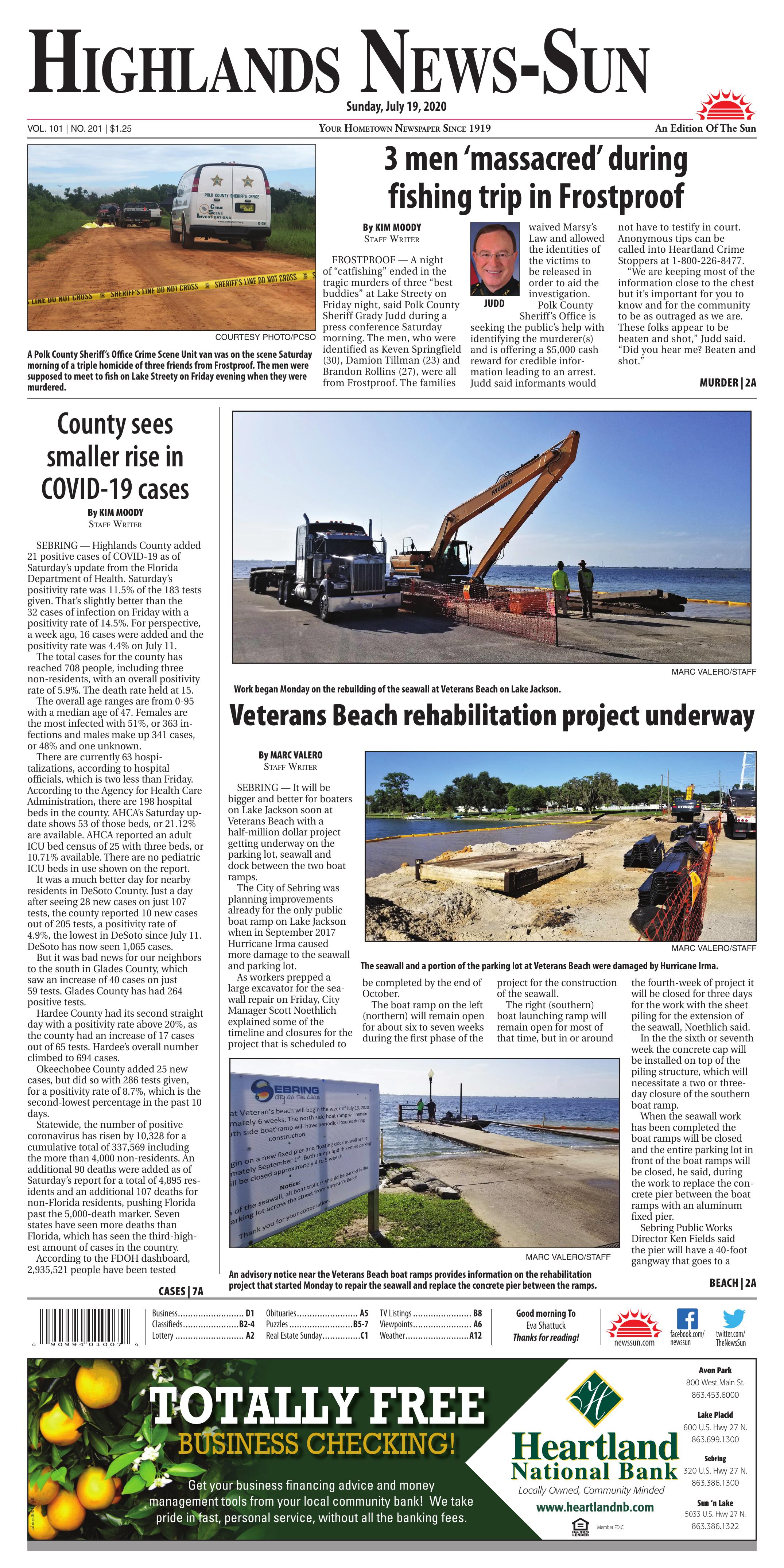