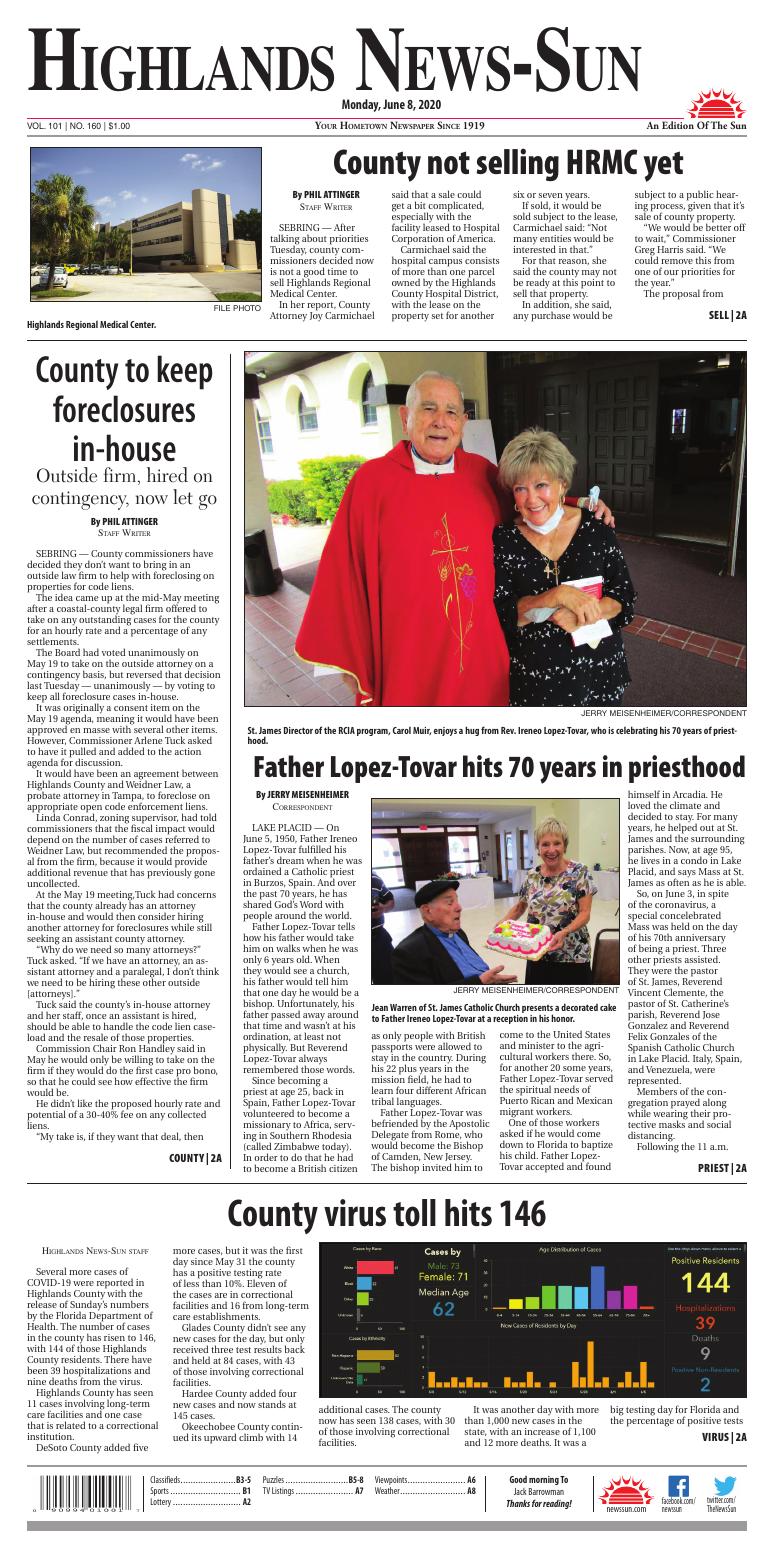 In her report, County Attorney Joy Carmichael said that a sale could get a bit complicated, especially with the facility leased to Hospital Corporation of America.

Carmichael said the hospital campus consists of more than one parcel owned by the Highlands County Hospital District, with the lease on the property set for another six or seven years.

If sold, it would be sold subject to the lease, Carmichael said: “Not many entities would be interested in that.”

For that reason, she said the county may not be ready at this point to sell that property.

In addition, she said, any purchase would be subject to a public hearing process, given that it’s sale of county property.

“We would be better off to wait,” Commissioner Greg Harris said. “We could remove this from one of our priorities for the year.”

The proposal from Highlands County Community Services was to use the proceeds of that sale to start an endowment to help the county support local nonprofit organizations.

In January, when commissioners were setting priorities for the year, Commissioner Jim Brooks said he wished he had listed selling the Highlands Regional Medical Center building as one of his priorities.

Commission Chair Ron Handley said it was his “own little pet peeve, “ adding that the county didn’t need “to be in the hospital business any more.”

Other commission priorities, in order of priority, are:

- Developing a standard fire house design for the entire county and continuing to improve the fire and emergency medical services department.

- Establishing the best route through the county for the proposed Southwest Florida Connector toll road between Collier and Polk Counties.

- Develop a plan of action for utility extensions.

- Build reserves for up to 3.5 months of operations and plan for a millage reduction, which may be hampered by expected reductions in revenue thanks to the COVID-19 pandemic.

- Make hurricane shelter upgrades, to include establishing a pet-friendly shelter.

- Design and prepare a succession plan for county administration.

- Streamline county bureaucracy to protect and grow the local economy by expanding existing businesses and keeping an eye on new opportunities.

- Improving the recycling program, which is on hold at the moment as the hauler has the processing facility closed and has asked for and been denied a rate increase to cover costs for the program.

St. James Director of the RCIA program, Carol Muir, enjoys a hug from Rev. Ireneo Lopez-Tovar, who is celebrating his 70 years of priesthood.

Jean Warren of St. James Catholic Church presents a decorated cake to Father Ireneo Lopez-Tovar at a reception in his honor.

LAKE PLACID — On June 5, 1950, Father Ireneo Lopez-Tovar fulfilled his father’s dream when he was ordained a Catholic priest in Burzos, Spain. And over the past 70 years, he has shared God’s Word with people around the world.

Father Lopez-Tovar tells how his father would take him on walks when he was only 6 years old. When they would see a church, his father would tell him that one day he would be a bishop. Unfortunately, his father passed away around that time and wasn’t at his ordination, at least not physically. But Reverend Lopez-Tovar always remembered those words.

Since becoming a priest at age 25, back in Spain, Father Lopez-Tovar volunteered to become a missionary to Africa, serving in Southern Rhodesia (called Zimbabwe today). In order to do that he had to become a British citizen as only people with British passports were allowed to stay in the country. During his 22 plus years in the mission field, he had to learn four different African tribal languages.

Father Lopez-Tovar was befriended by the Apostolic Delegate from Rome, who would become the Bishop of Camden, New Jersey. The bishop invited him to come to the United States and minister to the agricultural workers there. So, for another 20 some years, Father Lopez-Tovar served the spiritual needs of Puerto Rican and Mexican migrant workers.

One of those workers asked if he would come down to Florida to baptize his child. Father Lopez-Tovar accepted and found himself in Arcadia. He loved the climate and decided to stay. For many years, he helped out at St. James and the surrounding parishes. Now, at age 95, he lives in a condo in Lake Placid, and says Mass at St. James as often as he is able.

So, on June 3, in spite of the coronavirus, a special concelebrated Mass was held on the day of his 70th anniversary of being a priest. Three other priests assisted. They were the pastor of St. James, Reverend Vincent Clemente, the pastor of St. Catherine’s parish, Reverend Jose Gonzalez and Reverend Felix Gonzales of the Spanish Catholic Church in Lake Placid. Italy, Spain, and Venezuela, were represented.

Members of the congregation prayed along while wearing their protective masks and social distancing.

Following the 11 a.m. Mass, all were treated to lunch and desserts, including a decorated cake for the occasion. Father Lopez-Tovar reminisced that his sister, a nun, was able to attend his 50th anniversary, 20 years ago. But, this year she wasn’t able to come from Spain due to the virus; but, more importantly because she just turned 100.

Father Lopez-Tovar wishes to thank all those who participated in his special day.

Several more cases of COVID-19 were reported in Highlands County with the release of Sunday’s numbers by the Florida Department of Health. The number of cases in the county has risen to 146, with 144 of those Highlands County residents. There have been 39 hospitalizations and nine deaths from the virus.

Highlands County has seen 11 cases involving long-term care facilities and one case that is related to a correctional institution.

DeSoto County added five more cases, but it was the first day since May 31 the county has a positive testing rate of less than 10%. Eleven of the cases are in correctional facilities and 16 from long-term care establishments.

Glades County didn’t see any new cases for the day, but only received three test results back and held at 84 cases, with 43 of those involving correctional facilities.

Okeechobee County continued its upward climb with 14 additional cases. The county now has seen 138 cases, with 30 of those involving correctional facilities.

It was another day with more than 1,000 new cases in the state, with an increase of 1,100 and 12 more deaths. It was a big testing day for Florida and the percentage of positive tests was lower than it has been any day for the last two weeks. The total is now 63,938, which is the ninth most of any state, but Florida is No. 4 in the number of tests given and No. 36 in cases per million population.

Globally, the world eclipsed the 400,000 death mark and there have been more than 7 million cases of the virus. Brazil is No. 2 in total cases behind the United States, but have been one of the lowest-tested countries, giving 4,706 tests per million people. The U.S. has tested 63,954 people per million population for comparison.

SEBRING — County commissioners have decided they don’t want to bring in an outside law firm to help with foreclosing on properties for code liens.

The idea came up at the mid-May meeting after a coastal-county legal firm offered to take on any outstanding cases for the county for an hourly rate and a percentage of any settlements.

The Board had voted unanimously on May 19 to take on the outside attorney on a contingency basis, but reversed that decision last Tuesday — unanimously — by voting to keep all foreclosure cases in-house.

It was originally a consent item on the May 19 agenda, meaning it would have been approved en masse with several other items. However, Commissioner Arlene Tuck asked to have it pulled and added to the action agenda for discussion.

It would have been an agreement between Highlands County and Weidner Law, a probate attorney in Tampa, to foreclose on appropriate open code enforcement liens.

Linda Conrad, zoning supervisor, had told commissioners that the fiscal impact would depend on the number of cases referred to Weidner Law, but recommended the proposal from the firm, because it would provide additional revenue that has previously gone uncollected.

At the May 19 meeting,Tuck had concerns that the county already has an attorney in-house and would then consider hiring another attorney for foreclosures while still seeking an assistant county attorney.

“Why do we need so many attorneys?” Tuck asked. “If we have an attorney, an assistant attorney and a paralegal, I don’t think we need to be hiring these other outside [attorneys].”

Tuck said the county’s in-house attorney and her staff, once an assistant is hired, should be able to handle the code lien caseload and the resale of those properties.

Commission Chair Ron Handley said in May he would only be willing to take on the firm if they would do the first case pro bono, so that he could see how effective the firm would be.

He didn’t like the proposed hourly rate and potential of a 30-40% fee on any collected liens.

Commissioner Greg Harris said the matter is time-consuming, but would prefer to give them two or three cases up front, to see if the attorney can handle them.

County Attorney Joy Carmichael suggested, at that meeting, that the Board consider such an offer only on a contingency basis: Letting the fee be a portion of the proceeds of the settlement and sale.

Tuck argued, instead, that the county should do all cases in-house, “and we can make all the money.”

Commissioners asked Carmichael to look into the matter, and she reported last Tuesday that, in the past, the county attorney had handled code enforcement foreclosure issues.

Commissioner Don Elwell said last week that the matter is a “capacity issue” for him.

“If the staff has the capacity to do it, all day long, I’d prefer you do it,” Elwell said. 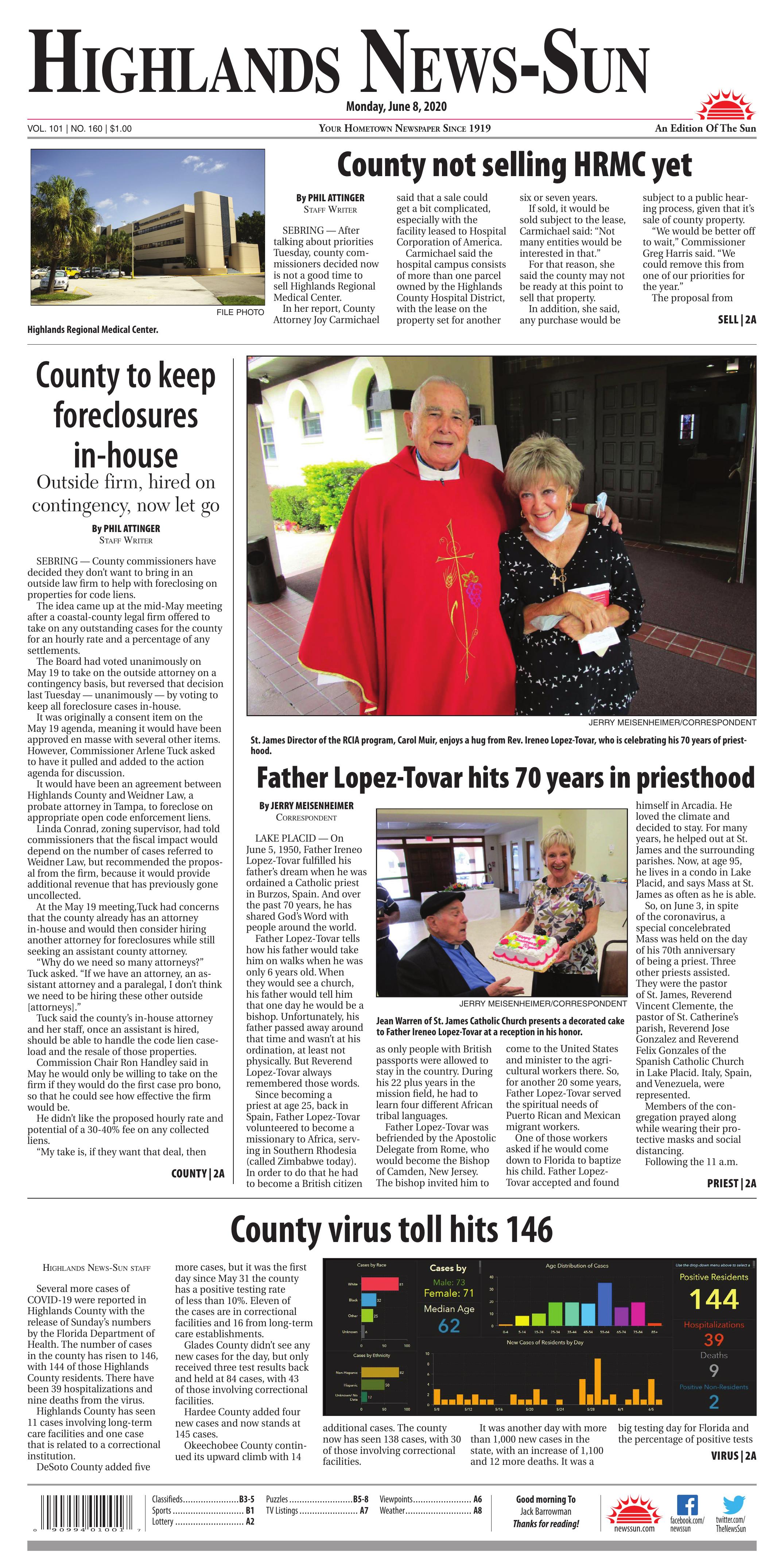