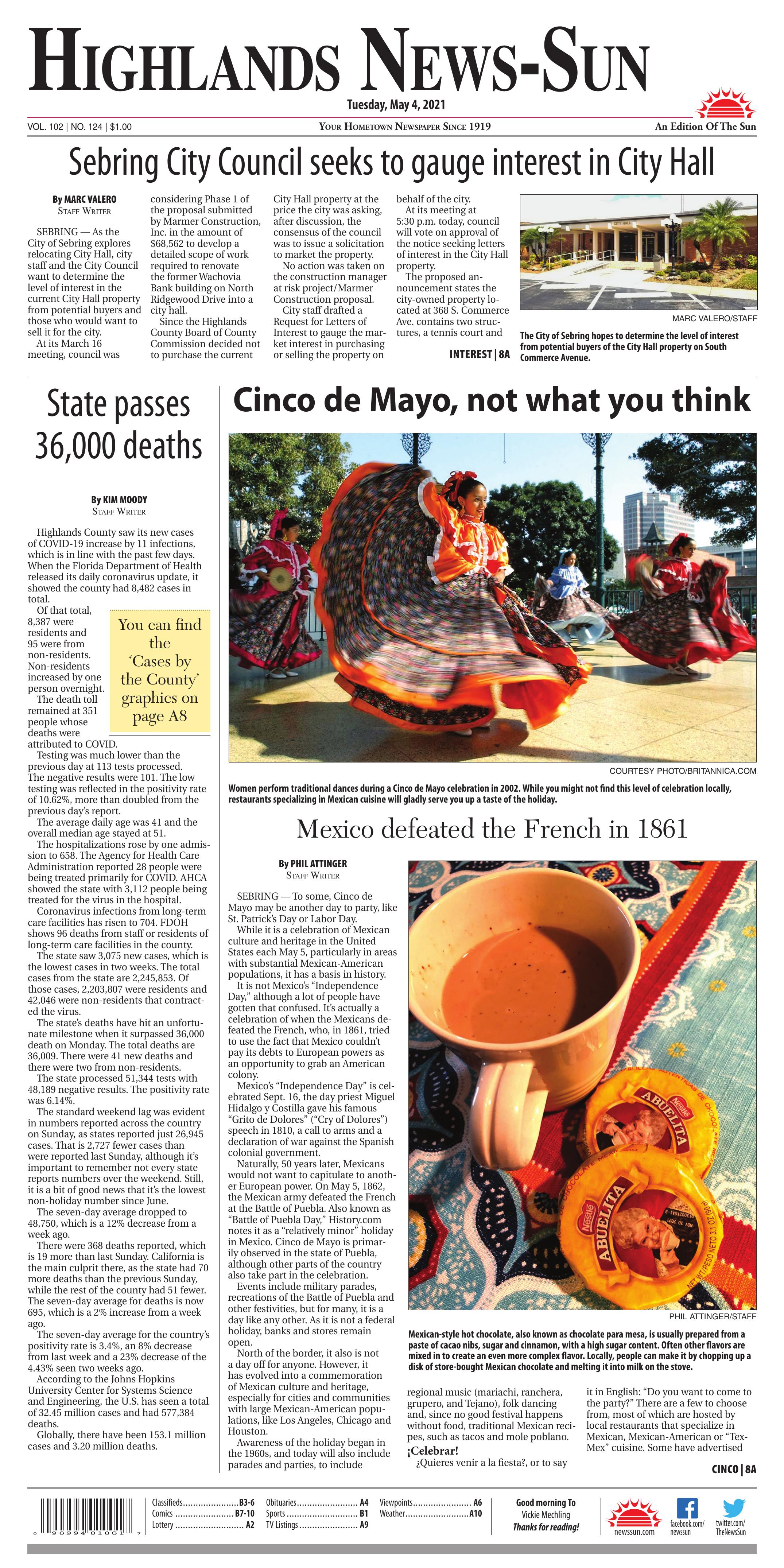 The City of Sebring hopes to determine the level of interest from potential buyers of the City Hall property on South Commerce Avenue.

SEBRING — As the City of Sebring explores relocating City Hall, city staff and the City Council want to determine the level of interest in the current City Hall property from potential buyers and those who would want to sell it for the city.

At its March 16 meeting, council was considering Phase 1 of the proposal submitted by Marmer Construction, Inc. in the amount of $68,562 to develop a detailed scope of work required to renovate the former Wachovia Bank building on North Ridgewood Drive into a city hall.

Since the Highlands County Board of County Commission decided not to purchase the current City Hall property at the price the city was asking, after discussion, the consensus of the council was to issue a solicitation to market the property.

No action was taken on the construction manager at risk project/Marmer Construction proposal.

City staff drafted a Request for Letters of Interest to gauge the market interest in purchasing or selling the property on behalf of the city.

At its meeting at 5:30 p.m. today, council will vote on approval of the notice seeking letters of interest in the City Hall property.

The City Hall building, which was remodeled in 2011, is 9,944 square feet. The air conditioning chiller system was replaced in 2020.

The three parking lots have a total area of 34,200 square feet.

Since July, the city has been exploring the possibility of relocating City Hall to the former Wachovia Bank Building at 228 N. Ridgewood Drive, which was built in 1973, but has been vacant for more than 10 years.

The building and the entire block along Ridgewood Drive was purchased by the Sebring Community Redevelopment Agency in February of 2019.

Women perform traditional dances during a Cinco de Mayo celebration in 2002. While you might not find this level of celebration locally, restaurants specializing in Mexican cuisine will gladly serve you up a taste of the holiday.

Mexican-style hot chocolate, also known as chocolate para mesa, is usually prepared from a paste of cacao nibs, sugar and cinnamon, with a high sugar content. Often other flavors are mixed in to create an even more complex flavor. Locally, people can make it by chopping up a disk of store-bought Mexican chocolate and melting it into milk on the stove.

Before you even grill the steak or chicken, or heat up a flour or corn tortilla, Mexican cuisine requires fresh ingredients, including, from left, dried peppers, garlic, cinnamon, yellow and red (and green) tomatoes, limes and mangos, and fresh peppers: Jalapeños, poblanos and serranos, to name three.

SEBRING — To some, Cinco de Mayo may be another day to party, like St. Patrick’s Day or Labor Day.

While it is a celebration of Mexican culture and heritage in the United States each May 5, particularly in areas with substantial Mexican-American populations, it has a basis in history.

It is not Mexico’s “Independence Day,” although a lot of people have gotten that confused. It’s actually a celebration of when the Mexicans defeated the French, who, in 1861, tried to use the fact that Mexico couldn’t pay its debts to European powers as an opportunity to grab an American colony.

Mexico’s “Independence Day” is celebrated Sept. 16, the day priest Miguel Hidalgo y Costilla gave his famous “Grito de Dolores” (“Cry of Dolores”) speech in 1810, a call to arms and a declaration of war against the Spanish colonial government.

Naturally, 50 years later, Mexicans would not want to capitulate to another European power. On May 5, 1862, the Mexican army defeated the French at the Battle of Puebla. Also known as “Battle of Puebla Day,” History.com notes it as a “relatively minor” holiday in Mexico. Cinco de Mayo is primarily observed in the state of Puebla, although other parts of the country also take part in the celebration.

Events include military parades, recreations of the Battle of Puebla and other festivities, but for many, it is a day like any other. As it is not a federal holiday, banks and stores remain open.

North of the border, it also is not a day off for anyone. However, it has evolved into a commemoration of Mexican culture and heritage, especially for cities and communities with large Mexican-American populations, like Los Angeles, Chicago and Houston.

Awareness of the holiday began in the 1960s, and today will also include parades and parties, to include regional music (mariachi, ranchera, grupero, and Tejano), folk dancing and, since no good festival happens without food, traditional Mexican recipes, such as tacos and mole poblano.

¡Celebrar!¿Quieres venir a la fiesta?, or to say it in English: “Do you want to come to the party?” There are a few to choose from, most of which are hosted by local restaurants that specialize in Mexican, Mexican-American or “Tex-Mex” cuisine. Some have advertised live music on Wednesday night and/or late-night parties for this weekend, since Cinco de Mayo falls on a Wednesday.

There’s even a bunch of businesses in downtown Lake Placid preparing to have a “Cinco de Mayo” mass ribbon-cutting starting at noon Wednesday at Wet Dogs Brewing, if you have your lunch hour free.

If you want to do up the holiday at home, YouTube has several Hispanic chefs with their own channels, Food Network features many Mexican and Mexican-American chefs, and even live-streaming services like Netflix have their own content on Mexican culture and cuisine, including a series called “Taco Chronicles” on all the regional flavors of the humble taco. If you don’t habla Español, make sure you set up your video for subtitles.

You might also visit your favorite source for recipes, whether that’s an international cookbook or a website, and find some simple dishes to try out on your own. Some basic advice among the chefs and cookbooks is to buy and use only fresh ingredients, preferably from a Mexican food market, and follow the instructions carefully your first time.

Also, if you want to try handling jalapeños, serranos or any other type of hot pepper, use very little and make sure you handle it only while wearing gloves, turning the gloves inside-out once you finish, and never, ever touching your face or eyes until after you have washed and rinsed your hands thoroughly. Highlands News-Sun staff know this from experience.

Of course, you can leave the cooking to the restaurants and order a cervesa or Coca (-Cola) to go with it. Add a lime to your drink, and don’t have too many to make sure you get home safely.

Highlands County saw its new cases of COVID-19 increase by 11 infections, which is in line with the past few days. When the Florida Department of Health released its daily coronavirus update, it showed the county had 8,482 cases in total.

Of that total, 8,387 were residents and 95 were from non-residents. Non-residents increased by one person overnight.

The death toll remained at 351 people whose deaths were attributed to COVID.

Testing was much lower than the previous day at 113 tests processed. The negative results were 101. The low testing was reflected in the positivity rate of 10.62%, more than doubled from the previous day’s report.

The average daily age was 41 and the overall median age stayed at 51.

The hospitalizations rose by one admission to 658. The Agency for Health Care Administration reported 28 people were being treated primarily for COVID. AHCA showed the state with 3,112 people being treated for the virus in the hospital.

The state’s deaths have hit an unfortunate milestone when it surpassed 36,000 death on Monday. The total deaths are 36,009. There were 41 new deaths and there were two from non-residents.

The standard weekend lag was evident in numbers reported across the country on Sunday, as states reported just 26,945 cases. That is 2,727 fewer cases than were reported last Sunday, although it’s important to remember not every state reports numbers over the weekend. Still, it is a bit of good news that it’s the lowest non-holiday number since June.

There were 368 deaths reported, which is 19 more than last Sunday. California is the main culprit there, as the state had 70 more deaths than the previous Sunday, while the rest of the county had 51 fewer. The seven-day average for deaths is now 695, which is a 2% increase from a week ago.

According to the Johns Hopkins University Center for Systems Science and Engineering, the U.S. has seen a total of 32.45 million cases and had 577,384 deaths.

Globally, there have been 153.1 million cases and 3.20 million deaths.