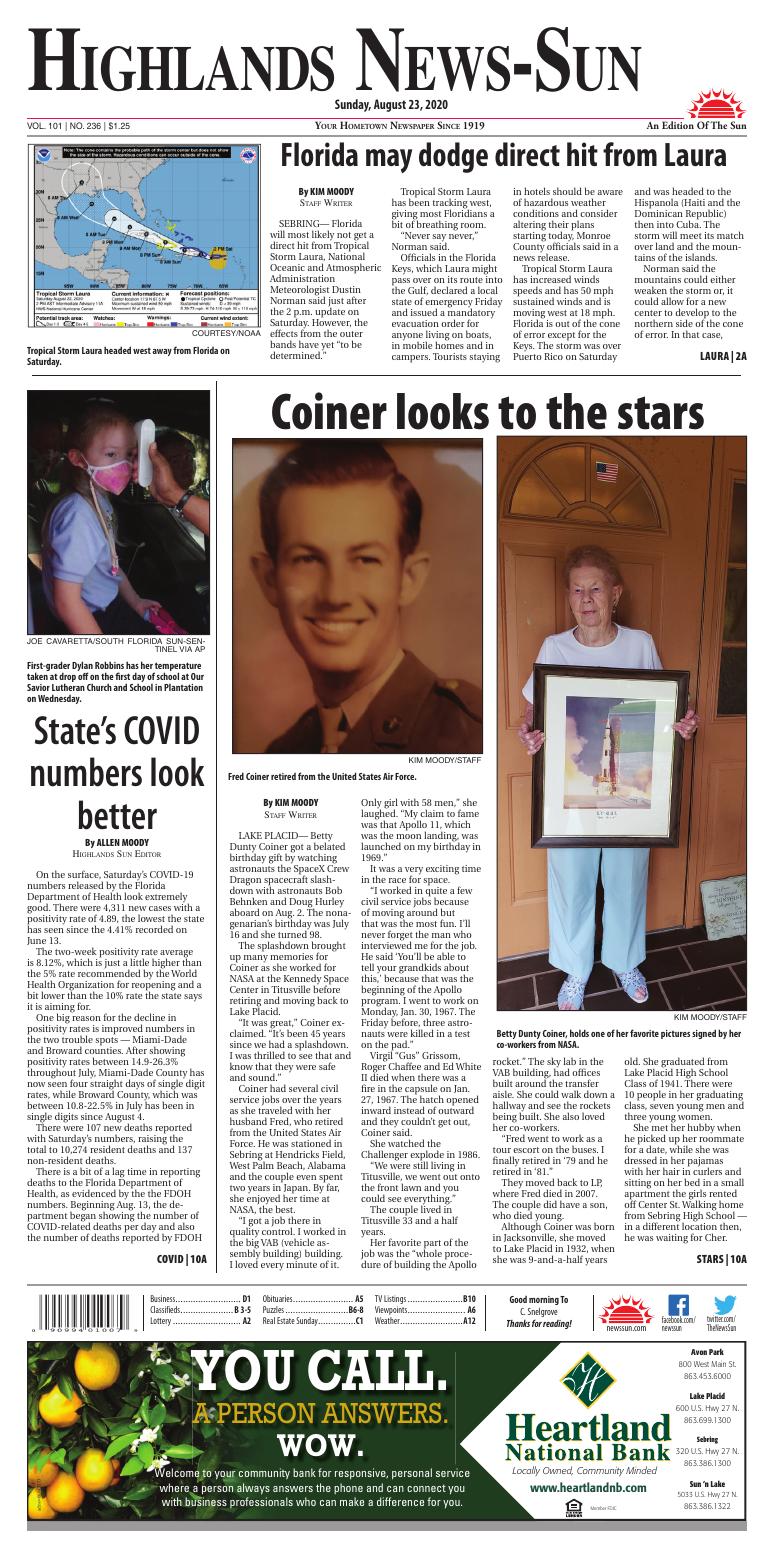 Tropical Storm Laura headed west away from Florida on Saturday.

SEBRING— Florida will most likely not get a direct hit from Tropical Storm Laura, National Oceanic and Atmospheric Administration Meteorologist Dustin Norman said just after the 2 p.m. update on Saturday. However, the effects from the outer bands have yet “to be determined.”

Tropical Storm Laura has been tracking west, giving most Floridians a bit of breathing room.

Officials in the Florida Keys, which Laura might pass over on its route into the Gulf, declared a local state of emergency Friday and issued a mandatory evacuation order for anyone living on boats, in mobile homes and in campers. Tourists staying in hotels should be aware of hazardous weather conditions and consider altering their plans starting today, Monroe County officials said in a news release.

Tropical Storm Laura has increased winds speeds and has 50 mph sustained winds and is moving west at 18 mph. Florida is out of the cone of error except for the Keys. The storm was over Puerto Rico on Saturday and was headed to the Hispanola (Haiti and the Dominican Republic) then into Cuba. The storm will meet its match over land and the mountains of the islands.

Norman said the mountains could either weaken the storm or, it could allow for a new center to develop to the northern side of the cone of error. In that case, the storm would move closer to the peninsula and the coast could feel the effects of the storm more. Highlands could possibly get some “squally” weather in that scenario as we would be on the northwest side of the storm. Norman calls it the “messy” side.

If the storm stays on its current track, Highlands County could feel “little to no effects.” The storm effects, if any, will be felt from Monday morning to the evening hours.

Norman said the cone is a statistical one in that 2/3 of the time the center of the hurricane will be located. It has a 1/3 chance that it could be outside. Norman said they will have more confidence in the forecast after Laura leaves Cuba.

Tropical Storms Marco and Laura storms could be in the Gulf in the next few days. Laura’s current track has her heading to Mississippi, Louisiana or Texas.

“We are in unprecedented times,” Mississippi Gov. Tate Reeves said at a news conference on Saturday as he declared a state of emergency. “We are dealing with not only two potential storms in the next few hours, we are also dealing with COVID-19.”

He urged residents to prepare for the storms and, if possible, find places to evacuate that are not public shelters.

Tropical Storm Marco is also forecast to make landfall in Louisiana or Texas.

The Associated Press contributed to this report.

Betty Dunty Coiner, holds one of her favorite pictures signed by her co-workers from NASA.

LAKE PLACID— Betty Dunty Coiner got a belated birthday gift by watching astronauts the SpaceX Crew Dragon spacecraft slashdown with astronauts Bob Behnken and Doug Hurley aboard on Aug. 2. The nonagenarian’s birthday was July 16 and she turned 98.

The splashdown brought up many memories for Coiner as she worked for NASA at the Kennedy Space Center in Titusville before retiring and moving back to Lake Placid.

“It was great,” Coiner exclaimed. “It’s been 45 years since we had a splashdown. I was thrilled to see that and know that they were safe and sound.”

Coiner had several civil service jobs over the years as she traveled with her husband Fred, who retired from the United States Air Force. He was stationed in Sebring at Hendricks Field, West Palm Beach, Alabama and the couple even spent two years in Japan. By far, she enjoyed her time at NASA, the best.

“I got a job there in quality control. I worked in the big VAB (vehicle assembly building) building. I loved every minute of it. Only girl with 58 men,” she laughed. “My claim to fame was that Apollo 11, which was the moon landing, was launched on my birthday in 1969.”

It was a very exciting time in the race for space.

“I worked in quite a few civil service jobs because of moving around but that was the most fun. I’ll never forget the man who interviewed me for the job. He said ‘You’ll be able to tell your grandkids about this,’ because that was the beginning of the Apollo program. I went to work on Monday, Jan. 30, 1967. The Friday before, three astronauts were killed in a test on the pad.”

Virgil “Gus” Grissom, Roger Chaffee and Ed White II died when there was a fire in the capsule on Jan. 27, 1967. The hatch opened inward instead of outward and they couldn’t get out, Coiner said.

She watched the Challenger explode in 1986.

“We were still living in Titusville, we went out onto the front lawn and you could see everything.”

The couple lived in Titusville 33 and a half years.

Her favorite part of the job was the “whole procedure of building the Apollo rocket.” The sky lab in the VAB building, had offices built around the transfer aisle. She could walk down a hallway and see the rockets being built. She also loved her co-workers.

They moved back to LP, where Fred died in 2007. The couple did have a son, who died young.

Although Coiner was born in Jacksonville, she moved to Lake Placid in 1932, when she was 9-and-a-half years old. She graduated from Lake Placid High School Class of 1941. There were 10 people in her graduating class, seven young men and three young women.

She met her hubby when he picked up her roommate for a date, while she was dressed in her pajamas with her hair in curlers and sitting on her bed in a small apartment the girls rented off Center St. Walking home from Sebring High School — in a different location then, he was waiting for Cher.

“ I asked, ‘what are you doing here?’” Betty said. He said he had come to walk her home from night school classes. “‘Oh, no, you’re not, either,’ I said. “You’re going with Earnestine.” Earnestine agreed the two were just friends.

It must have been love at first sight because Fred asked her parents if he could marry Betty. They said she was too young at 19-years-old. So, the couple were wed three days after her birthday on July 19,1942. She said she felt her parents were apprehensive because of WWII.

Fred was stationed at Hendricks Field in Sebring on the day the Japanese bombed Pearl Harbor. Betty said Fred found a bugle and played a “Call “To Arms” on a dock on Lake Jackson.

Betty said they were lucky and spent their summers in Asheville, North Carolina and their summers in Titusville, where they wound up living when she went to work at NASA. The couple took a long RV trip for a few months that she remembers fondly.

“I am independent. I still drive and pick up friends for church. God has been very good to me,” Coiner said. “My faith has grown as I got older. I am going to be 100.”

First-grader Dylan Robbins has her temperature taken at drop off on the first day of school at Our Savior Lutheran Church and School in Plantation on Wednesday.

Third grader Gabriela Natale studies behind plexiglass at her desk at Our Savior Lutheran Church and School in Plantation on Wednesday.

On the surface, Saturday’s COVID-19 numbers released by the Florida Department of Health look extremely good. There were 4,311 new cases with a positivity rate of 4.89, the lowest the state has seen since the 4.41% recorded on June 13.

The two-week positivity rate average is 8.12%, which is just a little higher than the 5% rate recommended by the World Health Organization for reopening and a bit lower than the 10% rate the state says it is aiming for.

One big reason for the decline in positivity rates is improved numbers in the two trouble spots — Miami-Dade and Broward counties. After showing positivity rates between 14.9-26.3% throughout July, Miami-Dade County has now seen four straight days of single digit rates, while Broward County, which was between 10.8-22.5% in July has been in single digits since August 4.

There were 107 new deaths reported with Saturday’s numbers, raising the total to 10,274 resident deaths and 137 non-resident deaths.

There is a bit of a lag time in reporting deaths to the Florida Department of Health, as evidenced by the the FDOH numbers. Beginning Aug. 13, the department began showing the number of COVID-related deaths per day and also the number of deaths reported by FDOH on the same day.

In Highlands County, the numbers were much better, as there were just 18 new cases out of 654 tests, yielding a positivity rate of just 2.68%. The two-week average for the county is 8.23%, which is pretty much in line with the state numbers.

There were no new deaths reported in the county, so the count remained at 53, and there were a reported 28 currently hospitalized, which is down eight from yesterday.

With many school districts now reopen and others planning to start this week, the number of cases in children hasn’t been quite as rosy as the overall state numbers. Between Friday, Aug. 7, and Thursday, Aug. 20, there were 7,188 cases involving minors, which led to 74 hospitalizations and one death, a 6-year-old girl in Hillsborough County, who became the youngest person in the state to die from the virus. She is the second person under 10 years old to have died from COVID-19.

The overall positivity rate in the state is 15.1%, which is slightly better over the past two weeks at 13.1%.

Several school districts in the state have already been affected by COVID-19, including nearby Okeechobee County, which saw two incidents in its first week of school. Thirty-two students and one teacher were moved to distance learning after an Okeechobee High School student tested positive. The 32 students consisted of 21 classmates and 11 children who rode the bus.

On Friday, it was announced a teacher at South Elementary School had tested positive, which resulted in 24 students and two teachers being quarantined. The school district sent a letter to parents and Okeechobee County Schools made social media posts notifying the public.

Okeechobee County isn’t the only county which has seen COVID cases in the classroom. Martin County announced Friday that 44 more students will have to quarantine, along with five staff members at two schools. That is in addition to the previous 292 students and 14 staff members told to quarantine.

The global death toll went past the 800,000 marker, according to the Johns Hopkins University Center for Systems Science and Engineering. The death tool as of 3 p.m. Saturday was 801,060.

The number of global cases also crept over 23 million. The United States, Brazil and India are the only three countries to have more than a million cases, with each having at least three million.

The United States has seen 5.64 million cases and there have been 175,843 deaths attributed to COVID. 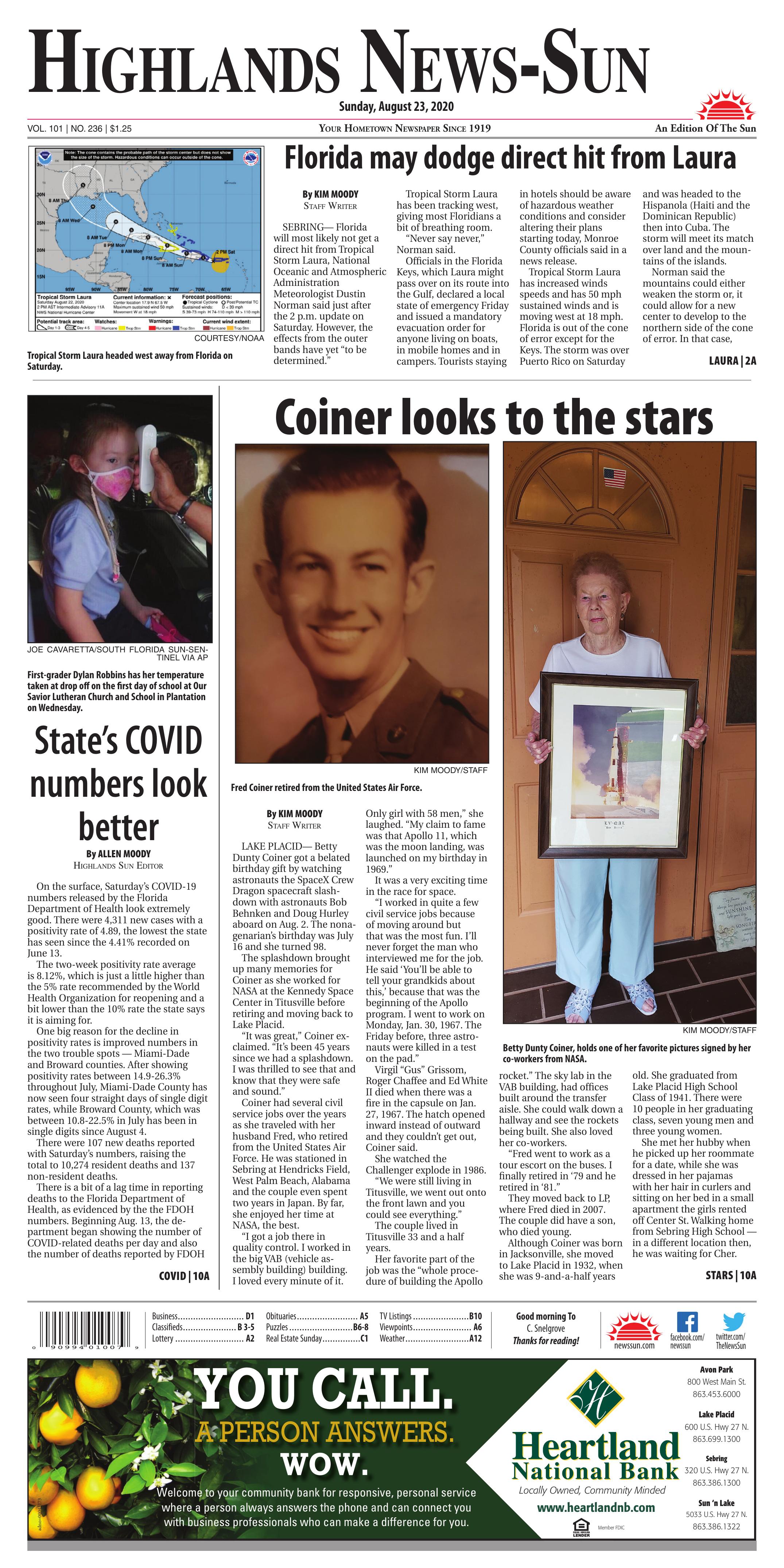