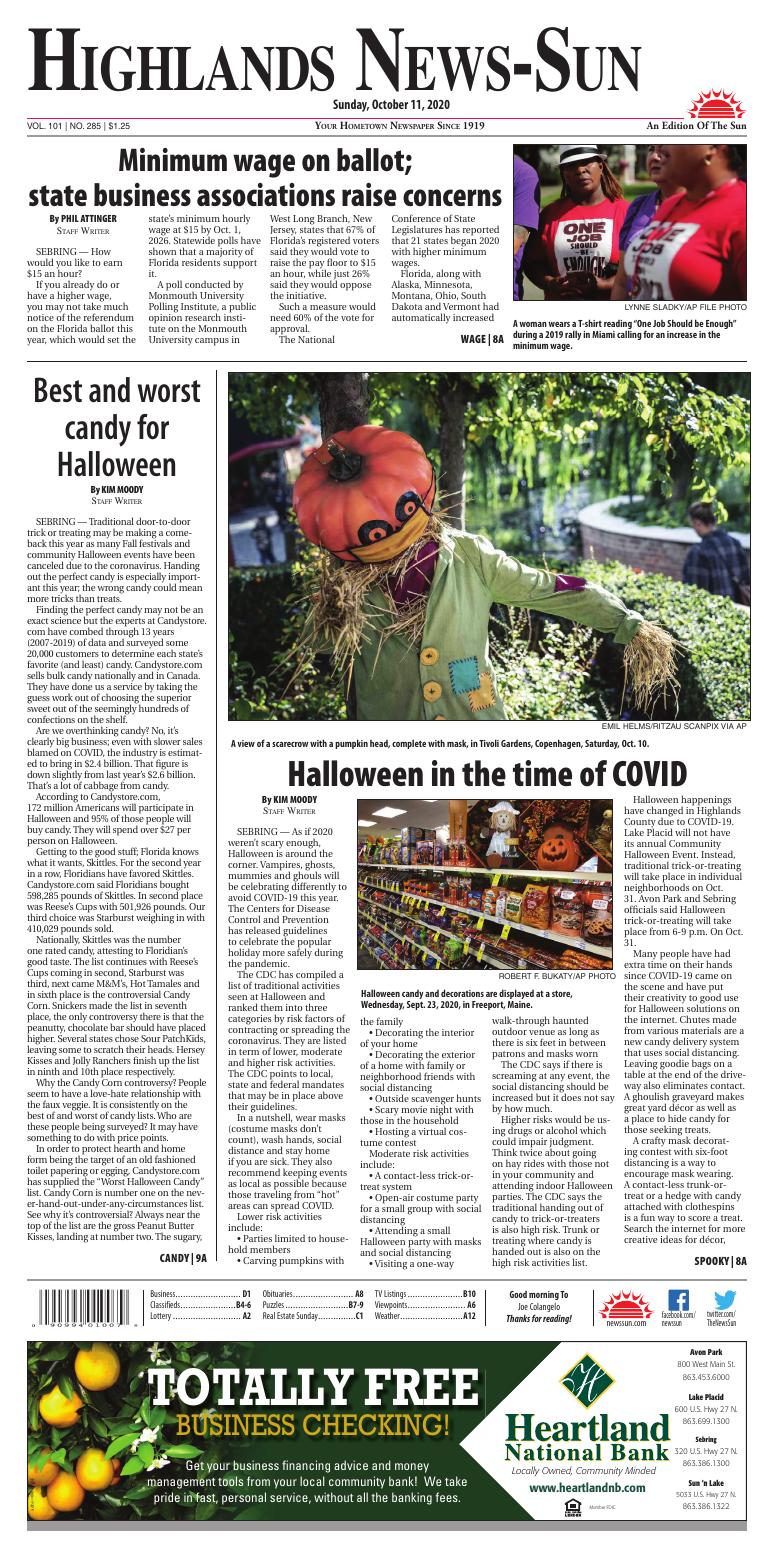 A woman wears a T-shirt reading “One Job Should be Enough” during a 2019 rally in Miami calling for an increase in the minimum wage.

In this April 15, 2015, file photo, protesters march in support of raising the minimum wage to $15 an hour as part of an expanding national movement known as Fight for 15, in Miami.

If you already do or have a higher wage, you may not take much notice of the referendum on the Florida ballot this year, which would set the state’s minimum hourly wage at $15 by Oct. 1, 2026. Statewide polls have shown that a majority of Florida residents support it.

Such a measure would need 60% of the vote for approval.

The National Conference of State Legislatures has reported that 21 states began 2020 with higher minimum wages.

Florida, along with Alaska, Minnesota, Montana, Ohio, South Dakota and Vermont had automatically increased their rates based on the cost of living.

Seven states and Washington, D.C., have approved a $15-per-hour pay floor of some kind, according to CNBC.com. Florida, if it approves the ballot measure, would become the second most populous state to take that step.

Proponents of the proposed increase, however, have said it’s needed to cover the gap between what people are paid and what it costs to live in the Sunshine State.

The amendment, listed as “Amendment 2” on the ballot, states that the measure would raise the state’s wage to $10 as of Sept. 30, 2021. Each Sept. 30 after that would raise the wage by $1 per hour until the minimum wage reaches $15 per hour in 2026. After that point, any minimum wage increases would be adjusted as they are done now for inflation, starting Sept. 30, 2027.

The ballot also states that state and local government costs would increase to comply with new minimum wage levels, with an estimated annual wage cost increase of $16 in Fiscal Year 2021-22, and increasing to $540 million in 2027. In bold, all-capital print, the text on the ballot then states that the measure would have a net negative impact on the state budget, which the Legislature would have to make up through higher taxes or reduced government services.

For the most part, it hasn’t raised a lot of attention at the local level.

Liz Barber, George Karos and Jennifer Bush, the presidents/CEOs respectively of the Sebring, Avon Park and Lake Placid Chambers of Commerce, said they may have had a few business owners mention it in passing.

Barber said business owners are concerned they may have to revise how they run their business if their labor costs increase, including layoffs and increases in pricing.

“[There’s] not as much chatter about it locally as might think,” Barber said of word-of-mouth and social media discussions.

The Florida Chamber of Commerce has a very strong stance against it, she said. Materials on the Florida Chamber website state that the midst of hard economic times brought on by the COVID-19 pandemic is not the time to institute a higher wage.

The Sebring Chamber is not aligned specifically with the Florida Chamber, Barber said, and is not involved in the fight against the amendment.

“I see both sides of the coin, from a business standpoint,” Barber said. “I do understand their concerns. Not that there’s ever a good time, [but] this is really a tough time. [It] will make things just a little bit challenging.”

Karos and Bush both said they saw the measure on the published sample ballot.

The Florida Restaurant and Lodging Association has also come out against the wage increase, arguing that the increase in labor cost could reduce the number of employees as well as arguing that tipped employees make more than $15 per hour.

Proponents of the law, including the Morgan & Morgan legal firm, say that there have been cases in the Florida court system of employers failing to meet the minimum wage for tipped employees, losses in tips to a mandatory “tip pool,” having people working off the clock or having workers pay out of wages to supply necessary work items like uniforms or safety equipment.

A view of a scarecrow with a pumpkin head, complete with mask, in Tivoli Gardens, Copenhagen, Saturday, Oct. 10.

Halloween candy and decorations are displayed at a store, Wednesday, Sept. 23, 2020, in Freeport, Maine.

SEBRING — As if 2020 weren’t scary enough, Halloween is around the corner. Vampires, ghosts, mummies and ghouls will be celebrating differently to avoid COVID-19 this year. The Centers for Disease Control and Prevention has released guidelines to celebrate the popular holiday more safely during the pandemic.

The CDC has compiled a list of traditional activities seen at Halloween and ranked them into three categories by risk factors of contracting or spreading the coronavirus. They are listed in term of lower, moderate and higher risk activities. The CDC points to local, state and federal mandates that may be in place above their guidelines.

In a nutshell, wear masks (costume masks don’t count), wash hands, social distance and stay home if you are sick. They also recommend keeping events as local as possible because those traveling from “hot” areas can spread COVID.

• Carving pumpkins with the family

• Decorating the interior of your home

• Scary movie night with those in the household

• Open-air costume party for a small group with social distancing

• Attending a small Halloween party with masks and social distancing

The CDC says if there is screaming at any event, the social distancing should be increased but it does not say by how much.

Higher risks would be using drugs or alcohol which could impair judgment. Think twice about going on hay rides with those not in your community and attending indoor Halloween parties. The CDC says the traditional handing out of candy to trick-or-treaters is also high risk. Trunk or treating where candy is handed out is also on the high risk activities list.

Many people have had extra time on their hands since COVID-19 came on the scene and have put their creativity to good use for Halloween solutions on the internet. Chutes made from various materials are a new candy delivery system that uses social distancing. Leaving goodie bags on a table at the end of the driveway also eliminates contact. A ghoulish graveyard makes great yard décor as well as a place to hide candy for those seeking treats.

A crafty mask decorating contest with six-foot distancing is a way to encourage mask wearing. A contact-less trunk-or-treat or a hedge with candy attached with clothespins is a fun way to score a treat. Search the internet for more creative ideas for décor, trick-or-treating, costume parades and more. For a full list of the CDC’s risk activities, visit,cdc.gov/coronavirus.

Halloween may have taken a hit, but the National Retail Federation, more than 148 million Americans plan to celebrate Halloween in some way. The participants have dropped from 172 million in 2019, according to NRF. The NRF estimates spending to be at $8.05 billion, which is down from 2019’s $8.78 billion. Fewer are participating in the holiday but those who are, are spending $92.12, which is more than the $86.27 they spent in 2019. People are taking NRF’s campaign of “shop safe, shop, shop early” to heart.

President and CEO Steven Silverstein of Spirit Halloween told NRF he saw “encouraging initial results and are anticipating a Halloween on par with last year,” in a Sept. 14 article.

“The magic of Halloween is transformative,” he said. “We need this now more than ever. It brings sheer fun and joy for families, especially for the kids. That is the beauty of Halloween – it’s stress-free and designed to be outdoors. It’s a celebration and opportunity to transform into whoever or whatever you want to be.”

SEBRING — Traditional door-to-door trick or treating may be making a comeback this year as many Fall festivals and community Halloween events have been canceled due to the coronavirus. Handing out the perfect candy is especially important this year; the wrong candy could mean more tricks than treats.

Finding the perfect candy may not be an exact science but the experts at Candystore.com have combed through 13 years (2007-2019) of data and surveyed some 20,000 customers to determine each state’s favorite (and least) candy. Candystore.com sells bulk candy nationally and in Canada. They have done us a service by taking the guess work out of choosing the superior sweet out of the seemingly hundreds of confections on the shelf.

Are we overthinking candy? No, it’s clearly big business; even with slower sales blamed on COVID, the industry is estimated to bring in $2.4 billion. That figure is down slightly from last year’s $2.6 billion. That’s a lot of cabbage from candy.

According to Candystore.com, 172 million Americans will participate in Halloween and 95% of those people will buy candy. They will spend over $27 per person on Halloween.

Getting to the good stuff; Florida knows what it wants, Skittles. For the second year in a row, Floridians have favored Skittles. Candystore.com said Floridians bought 598,285 pounds of Skittles. In second place was Reese’s Cups with 501,926 pounds. Our third choice was Starburst weighing in with 410,029 pounds sold.

Nationally, Skittles was the number one rated candy, attesting to Floridian’s good taste. The list continues with Reese’s Cups coming in second, Starburst was third, next came M&M’s, Hot Tamales and in sixth place is the controversial Candy Corn. Snickers made the list in seventh place, the only controversy there is that the peanutty, chocolate bar should have placed higher. Several states chose Sour PatchKids, leaving some to scratch their heads. Hersey Kisses and Jolly Ranchers finish up the list in ninth and 10th place respectively.

Why the Candy Corn controversy? People seem to have a love-hate relationship with the faux veggie. It is consistently on the best of and worst of candy lists. Who are these people being surveyed? It may have something to do with price points.

In order to protect hearth and home form being the target of an old fashioned toilet papering or egging, Candystore.com has supplied the “Worst Halloween Candy” list. Candy Corn is number one on the never-hand-out-under-any-circumstances list. See why it’s controversial? Always near the top of the list are the gross Peanut Butter Kisses, landing at number two. The sugary, Styrofoam-ish Circus Peanuts are understandably number three on the list. Fourth place are wax cola bottles — because who wants to work that hard to get three drops of sugar water? Smarties came in at number five. The debatable Necco Wafers sit firmly in sixth place. Despite the amount of people who say they hate them, when the company went out of business, a buying frenzy turned people into Necco hoarders. Go figure. In seventh place, Tootsie Rolls, followed by Mary Janes. Ninth place belongs to Good & Plenty while the closely related black licorice rounds out the list in 10th place.

Handing out the right candy is also important to parents as they will stash more than 50% of their kids loot, says Candystore.com. 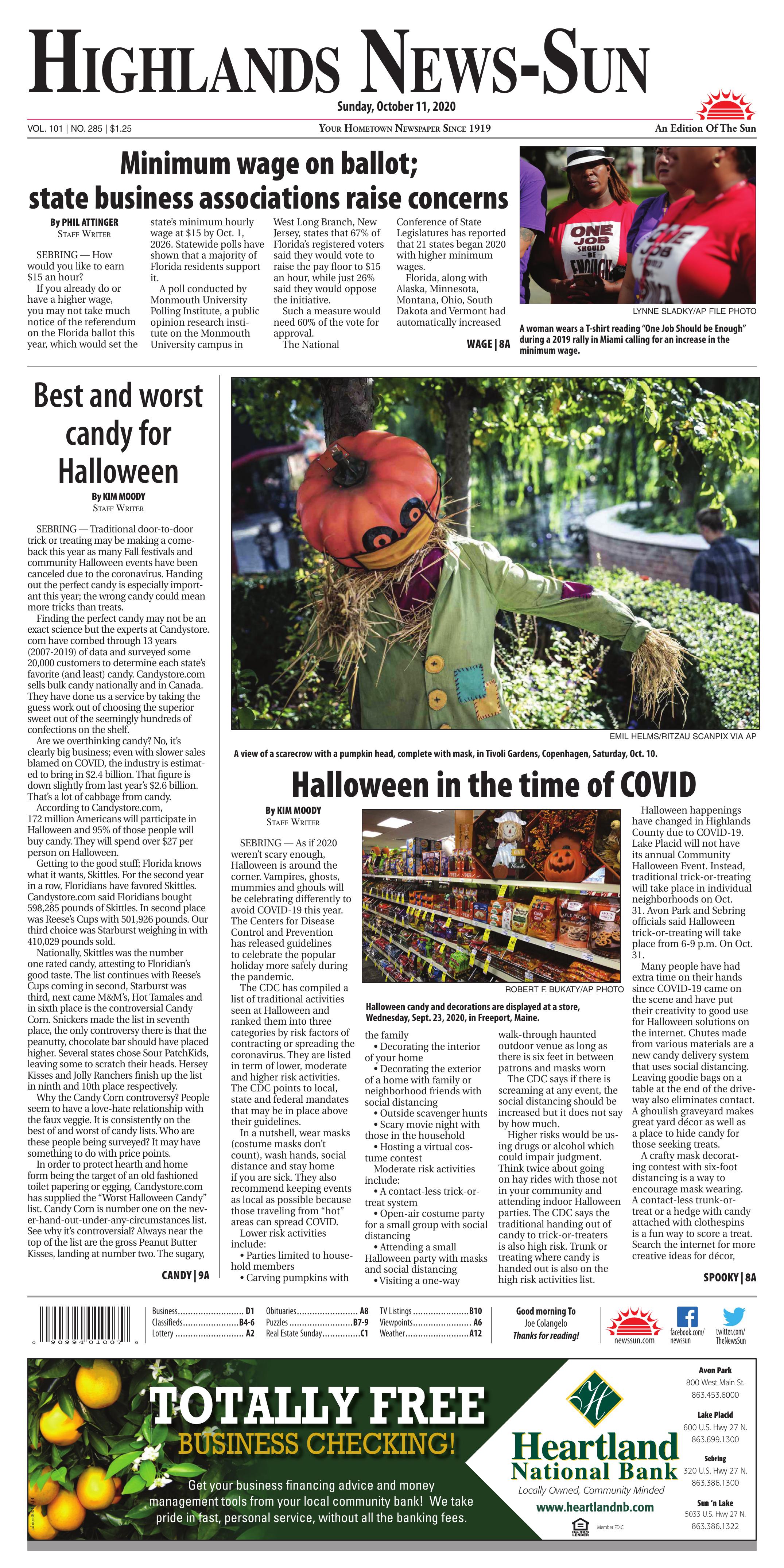