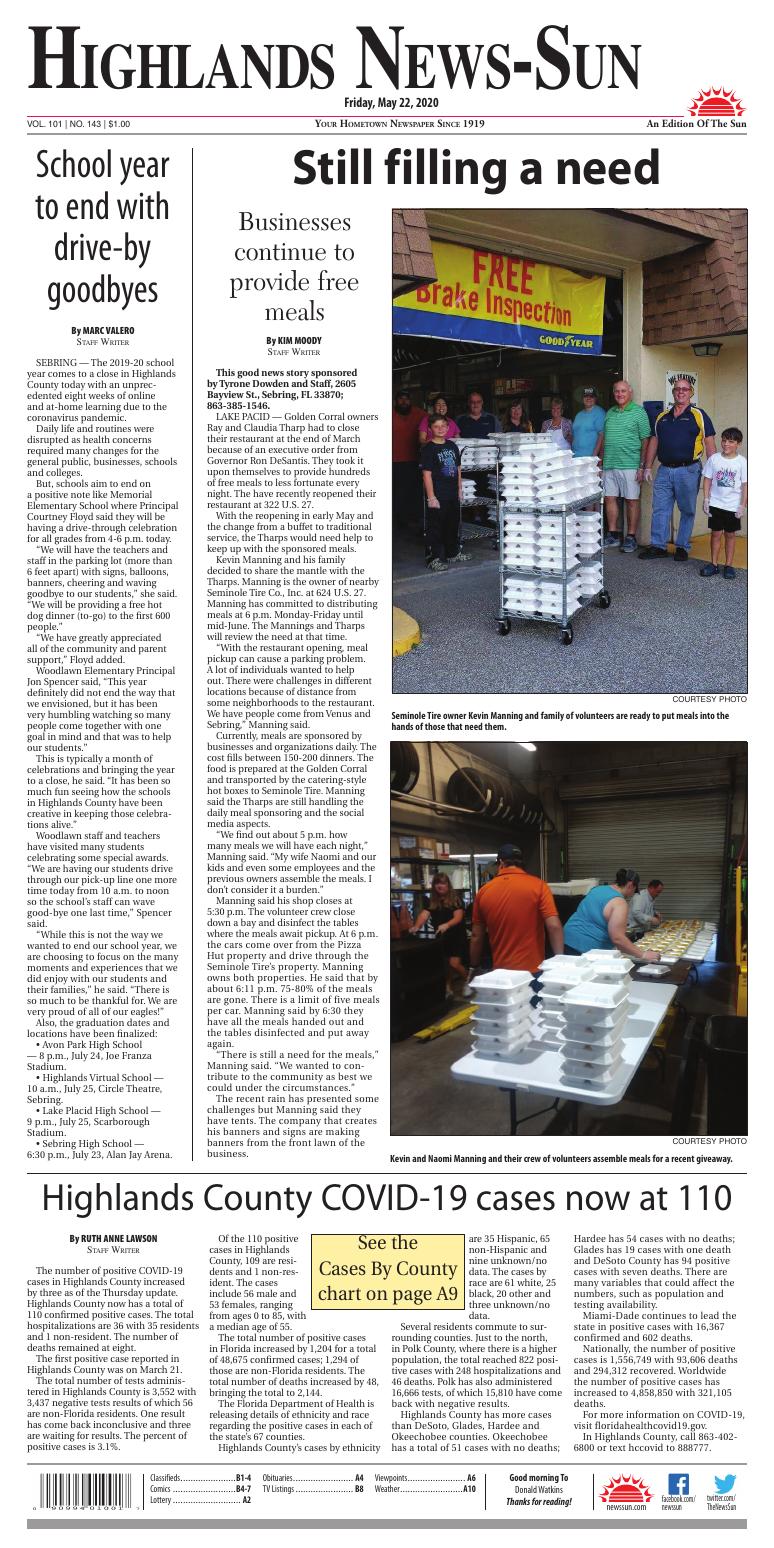 Kevin and Naomi Manning and their crew of volunteers assemble meals for a recent giveaway.

Seminole Tire owner Kevin Manning and family of volunteers are ready to put meals into the hands of those that need them.

LAKE PACID — Golden Corral owners Ray and Claudia Tharp had to close their restaurant at the end of March because of an executive order from Governor Ron DeSantis. They took it upon themselves to provide hundreds of free meals to less fortunate every night. The have recently reopened their restaurant at 322 U.S. 27.

With the reopening in early May and the change from a buffet to traditional service, the Tharps would need help to keep up with the sponsored meals.

Kevin Manning and his family decided to share the mantle with the Tharps. Manning is the owner of nearby Seminole Tire Co., Inc. at 624 U.S. 27. Manning has committed to distributing meals at 6 p.m. Monday-Friday until mid-June. The Mannings and Tharps will review the need at that time.

“With the restaurant opening, meal pickup can cause a parking problem. A lot of individuals wanted to help out. There were challenges in different locations because of distance from some neighborhoods to the restaurant. We have people come from Venus and Sebring,” Manning said.

Currently, meals are sponsored by businesses and organizations daily. The cost fills between 150-200 dinners. The food is prepared at the Golden Corral and transported by the catering-style hot boxes to Seminole Tire. Manning said the Tharps are still handling the daily meal sponsoring and the social media aspects.

“We find out about 5 p.m. how many meals we will have each night,” Manning said. “My wife Naomi and our kids and even some employees and the previous owners assemble the meals. I don’t consider it a burden.”

Manning said his shop closes at 5:30 p.m. The volunteer crew close down a bay and disinfect the tables where the meals await pickup. At 6 p.m. the cars come over from the Pizza Hut property and drive through the Seminole Tire’s property. Manning owns both properties. He said that by about 6:11 p.m. 75-80% of the meals are gone. There is a limit of five meals per car. Manning said by 6:30 they have all the meals handed out and the tables disinfected and put away again.

“There is still a need for the meals,” Manning said. “We wanted to contribute to the community as best we could under the circumstances.”

The recent rain has presented some challenges but Manning said they have tents. The company that creates his banners and signs are making banners from the front lawn of the business.

The total number of tests administered in Highlands County is 3,552 with 3,437 negative tests results of which 56 are non-Florida residents. One result has come back inconclusive and three are waiting for results. The percent of positive cases is 3.1%.

The Florida Department of Health is releasing details of ethnicity and race regarding the positive cases in each of the state’s 67 counties.

Several residents commute to surrounding counties. Just to the north, in Polk County, where there is a higher population, the total reached 822 positive cases with 248 hospitalizations and 46 deaths. Polk has also administered 16,666 tests, of which 15,810 have come back with negative results.

Miami-Dade continues to lead the state in positive cases with 16,367 confirmed and 602 deaths.

SEBRING — The 2019-20 school year comes to a close in Highlands County today with an unprecedented eight weeks of online and at-home learning due to the coronavirus pandemic.

Daily life and routines were disrupted as health concerns required many changes for the general public, businesses, schools and colleges.

But, schools aim to end on a positive note like Memorial Elementary School where Principal Courtney Floyd said they will be having a drive-through celebration for all grades from 4-6 p.m. today.

“We will have the teachers and staff in the parking lot (more than 6 feet apart) with signs, balloons, banners, cheering and waving goodbye to our students,” she said. “We will be providing a free hot dog dinner (to-go) to the first 600 people.”

“We have greatly appreciated all of the community and parent support,” Floyd added.

Woodlawn Elementary Principal Jon Spencer said, “This year definitely did not end the way that we envisioned, but it has been very humbling watching so many people come together with one goal in mind and that was to help our students.”

This is typically a month of celebrations and bringing the year to a close, he said. “It has been so much fun seeing how the schools in Highlands County have been creative in keeping those celebrations alive.”

Woodlawn staff and teachers have visited many students celebrating some special awards. “We are having our students drive through our pick-up line one more time today from 10 a.m. to noon so the school’s staff can wave good-bye one last time,” Spencer said.

“While this is not the way we wanted to end our school year, we are choosing to focus on the many moments and experiences that we did enjoy with our students and their families,” he said. “There is so much to be thankful for. We are very proud of all of our eagles!”

Also, the graduation dates and locations have been finalized: 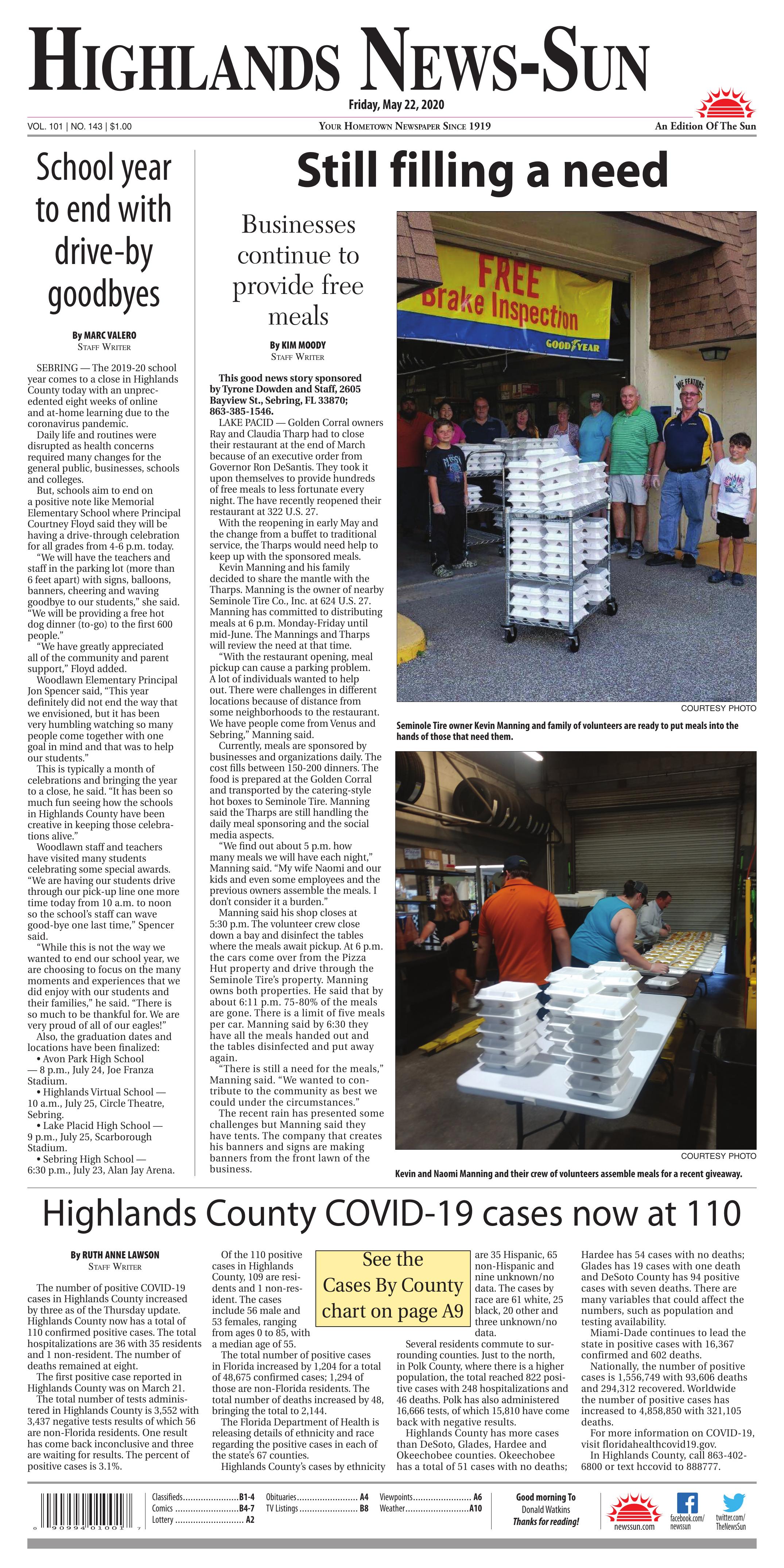