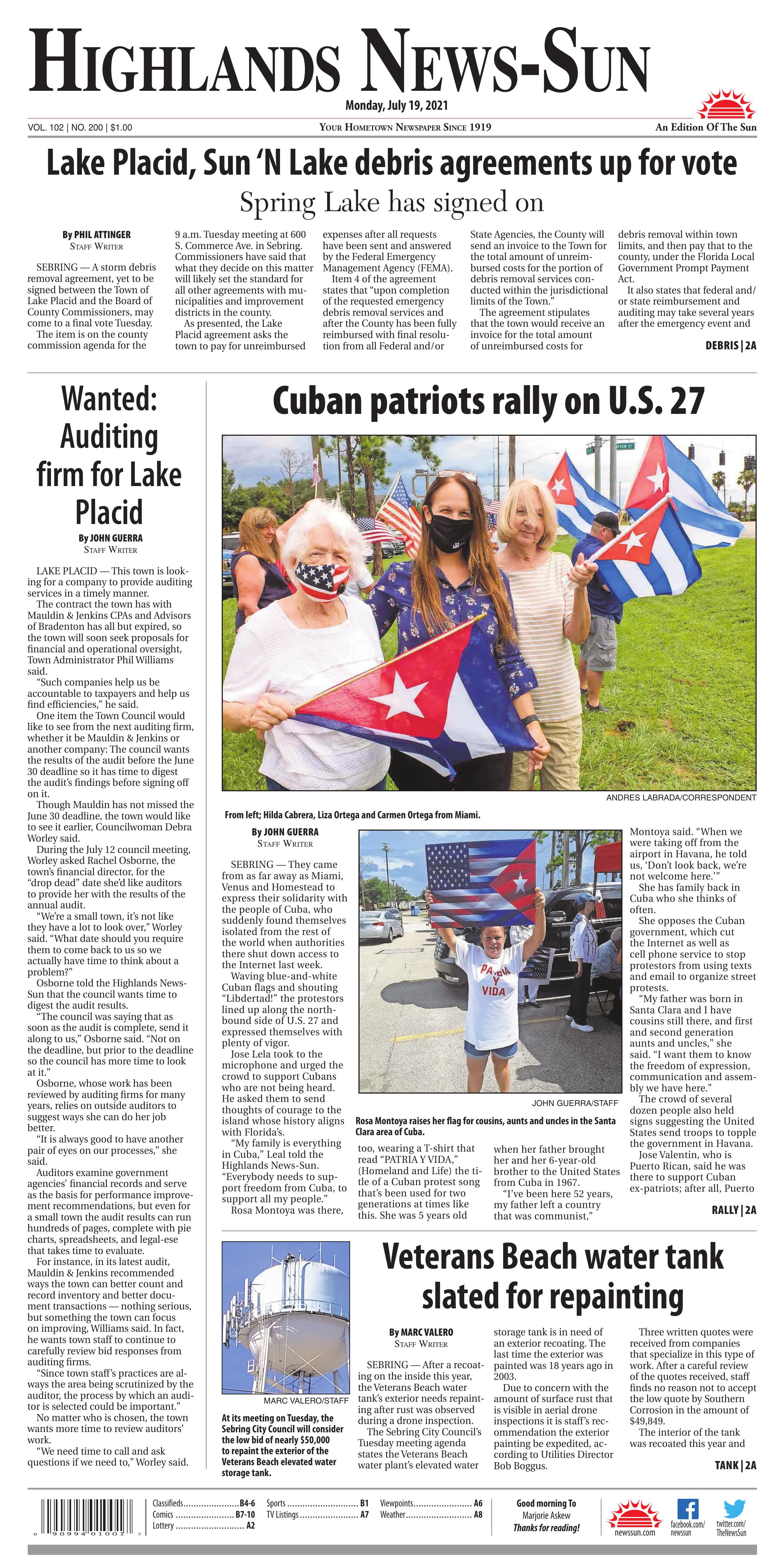 SEBRING — A storm debris removal agreement, yet to be signed between the Town of Lake Placid and the Board of County Commissioners, may come to a final vote Tuesday.

The item is on the county commission agenda for the 9 a.m. Tuesday meeting at 600 S. Commerce Ave. in Sebring. Commissioners have said that what they decide on this matter will likely set the standard for all other agreements with municipalities and improvement districts in the county.

As presented, the Lake Placid agreement asks the town to pay for unreimbursed expenses after all requests have been sent and answered by the Federal Emergency Management Agency (FEMA).

Item 4 of the agreement states that “upon completion of the requested emergency debris removal services and after the County has been fully reimbursed with final resolution from all Federal and/or State Agencies, the County will send an invoice to the Town for the total amount of unreimbursed costs for the portion of debris removal services conducted within the jurisdictional limits of the Town.”

The agreement stipulates that the town would receive an invoice for the total amount of unreimbursed costs for debris removal within town limits, and then pay that to the county, under the Florida Local Government Prompt Payment Act.

It also states that federal and/or state reimbursement and auditing may take several years after the emergency event and debris removal. However, if the town agrees to the arrangement, the Town Council would be responsible for the total amount of unreimbursed costs for its debris removal.

Other jurisdictions are watching what will happen with the Lake Placid agreement. Sun ‘N Lake of Sebring Special Improvement District has also held off on approving the agreement. At their second meeting in June, the Sun ‘N Lake board of Supervisors said they wanted to see what would happen with Lake Placid.

The Sun ‘N Lake agreement sits on the county agenda just after the Lake Placid discussion. It also has the same stipulations as to payment.

Every debris removal agreement with the county stands for just one year, and will have to be renewed every December, well after the Atlantic hurricane season ends.

Each agreement is also identical to last year’s agreement, in that it would have the county handle all storm debris collection and monitoring of debris collection through its contractors, and then have county staff prepare and file reimbursement paperwork with FEMA.

Spring Lake Improvement District had already signed on with the agreement a month ago, according to statements from District General Manager Joe DeCerbo at the July 6 county commission meeting.

That said, Spring Lake Board of Supervisors Chair Tim McKenna signed the new document on Thursday, July 15, with DeCerbo signing on as a witness.

“My board could not approve and sign the document fast enough,” DeCerbo told commissioners on July 6.

By the end of that meeting, commissioners had directed County Attorney Sherry Sutphen and County Administrator Randy Vosburg to add an amendment to the Spring Lake agreement similar to one the City of Sebring has requested: To amend the agreement after approval to match any financial considerations other entities receive.

Rosa Montoya raises her flag for cousins, aunts and uncles in the Santa Clara area of Cuba.

These Cuban families stood on the side of northbound U.S. 27 Saturday and urged motorists to hook their support for protestors in Cuba.

This protestor wants help from the United States at a rally for Cuban protestors on Saturday.

SEBRING — They came from as far away as Miami, Venus and Homestead to express their solidarity with the people of Cuba, who suddenly found themselves isolated from the rest of the world when authorities there shut down access to the Internet last week.

Waving blue-and-white Cuban flags and shouting “Libdertad!” the protestors lined up along the northbound side of U.S. 27 and expressed themselves with plenty of vigor.

Jose Lela took to the microphone and urged the crowd to support Cubans who are not being heard. He asked them to send thoughts of courage to the island whose history aligns with Florida’s.

“My family is everything in Cuba,” Leal told the Highlands News-Sun. “Everybody needs to support freedom from Cuba, to support all my people.”

Rosa Montoya was there, too, wearing a T-shirt that read “PATRIA Y VIDA,” (Homeland and Life) the title of a Cuban protest song that’s been used for two generations at times like this. She was 5 years old when her father brought her and her 6-year-old brother to the United States from Cuba in 1967.

“I’ve been here 52 years, my father left a country that was communist,” Montoya said. “When we were taking off from the airport in Havana, he told us, ‘Don’t look back, we’re not welcome here.’”

She has family back in Cuba who she thinks of often.

She opposes the Cuban government, which cut the Internet as well as cell phone service to stop protestors from using texts and email to organize street protests.

“My father was born in Santa Clara and I have cousins still there, and first and second generation aunts and uncles,” she said. “I want them to know the freedom of expression, communication and assembly we have here.”

Jose Valentin, who is Puerto Rican, said he was there to support Cuban ex-patriots; after all, Puerto Rica is another Caribbean Island.

“I’m sympathetic toward their cause,” Valentin said. “It is a just cause. I’m here to say, ‘I’m with you. If I can help you any legal way, I will.’”

Stacy Carlile grew up in Sugarloaf, a tiny key just north of Key West. The Lower Keys have long been connected to Cuba through smuggling, running, and rum running in the 1930s.

Cuban rafters come ashore there, and many Cubans have made a life in the Lower Keys, owning fishing boats and small businesses.

“I’m here today because Cuba is my second heritage,” Carlile said. “I love them and want to support their freedom.”

Sebring was not alone in its protests Saturday. Other boisterous gatherings were held in Central Florida, including one at Lake Eola in downtown Orlando and another at Kissimmee Lake Front Park Saturday afternoon.

At its meeting on Tuesday, the Sebring City Council will consider the low bid of nearly $50,000 to repaint the exterior of the Veterans Beach elevated water storage tank.

SEBRING — After a recoating on the inside this year, the Veterans Beach water tank’s exterior needs repainting after rust was observed during a drone inspection.

The Sebring City Council’s Tuesday meeting agenda states the Veterans Beach water plant’s elevated water storage tank is in need of an exterior recoating. The last time the exterior was painted was 18 years ago in 2003.

Due to concern with the amount of surface rust that is visible in aerial drone inspections it is staff’s recommendation the exterior painting be expedited, according to Utilities Director Bob Boggus.

Three written quotes were received from companies that specialize in this type of work. After a careful review of the quotes received, staff finds no reason not to accept the low quote by Southern Corrosion in the amount of $49,849.

The interior of the tank was recoated this year and some repairs were made.

On July 23, 2020, the City Council approved staff’s recommendation to accept the low quote ($43,763) submitted by Pittsburg Tank and Tower to recoat the interior of the Veteran’s Beach elevated water tank.

On Jan. 8, while the Pittsburg Tank crew arrived on site to began rigging the tank in preparation for the interior coating work, it was discovered that one of the under-tank catwalk supports had rusted completely, making the catwalk unstable.

In January, Council approved a change order in the amount of $18,195 for Pittsburg Tank and Tower to make the repairs to the catwalk.

Also, Boggus is seeking a budget amendment because the Water Distribution Department’s 2020-21 budget allocation for operating funding has been exhausted.

The shortfalls for this account are primarily due to a budget decrease and increased costs, he stated on the agenda. There are sufficient funs available for a line item transfer to cover the estimated funding needed to complete the 2020-21 fiscal year.

The requested budget amendment would transfer $10,000 from the pumps and mapping accounts to the operating account.

The Sebring City Council will meeting at 5:30 p.m., Tuesday, in the Council Chambers at City Hall, 368 S. Commerce Ave.

LAKE PLACID — This town is looking for a company to provide auditing services in a timely manner.

The contract the town has with Mauldin & Jenkins CPAs and Advisors of Bradenton has all but expired, so the town will soon seek proposals for financial and operational oversight, Town Administrator Phil Williams said.

“Such companies help us be accountable to taxpayers and help us find efficiencies,” he said.

One item the Town Council would like to see from the next auditing firm, whether it be Mauldin & Jenkins or another company: The council wants the results of the audit before the June 30 deadline so it has time to digest the audit’s findings before signing off on it.

Though Mauldin has not missed the June 30 deadline, the town would like to see it earlier, Councilwoman Debra Worley said.

During the July 12 council meeting, Worley asked Rachel Osborne, the town’s financial director, for the “drop dead” date she’d like auditors to provide her with the results of the annual audit.

“We’re a small town, it’s not like they have a lot to look over,” Worley said. “What date should you require them to come back to us so we actually have time to think about a problem?”

Osborne told the Highlands News-Sun that the council wants time to digest the audit results.

“The council was saying that as soon as the audit is complete, send it along to us,” Osborne said. “Not on the deadline, but prior to the deadline so the council has more time to look at it.”

Osborne, whose work has been reviewed by auditing firms for many years, relies on outside auditors to suggest ways she can do her job better.

“It is always good to have another pair of eyes on our processes,” she said.

Auditors examine government agencies’ financial records and serve as the basis for performance improvement recommendations, but even for a small town the audit results can run hundreds of pages, complete with pie charts, spreadsheets, and legal-ese that takes time to evaluate.

For instance, in its latest audit, Mauldin & Jenkins recommended ways the town can better count and record inventory and better document transactions — nothing serious, but something the town can focus on improving, Williams said. In fact, he wants town staff to continue to carefully review bid responses from auditing firms.

“Since town staff’s practices are always the area being scrutinized by the auditor, the process by which an auditor is selected could be important.”

No matter who is chosen, the town wants more time to review auditors’ work.

“We need time to call and ask questions if we need to,” Worley said.