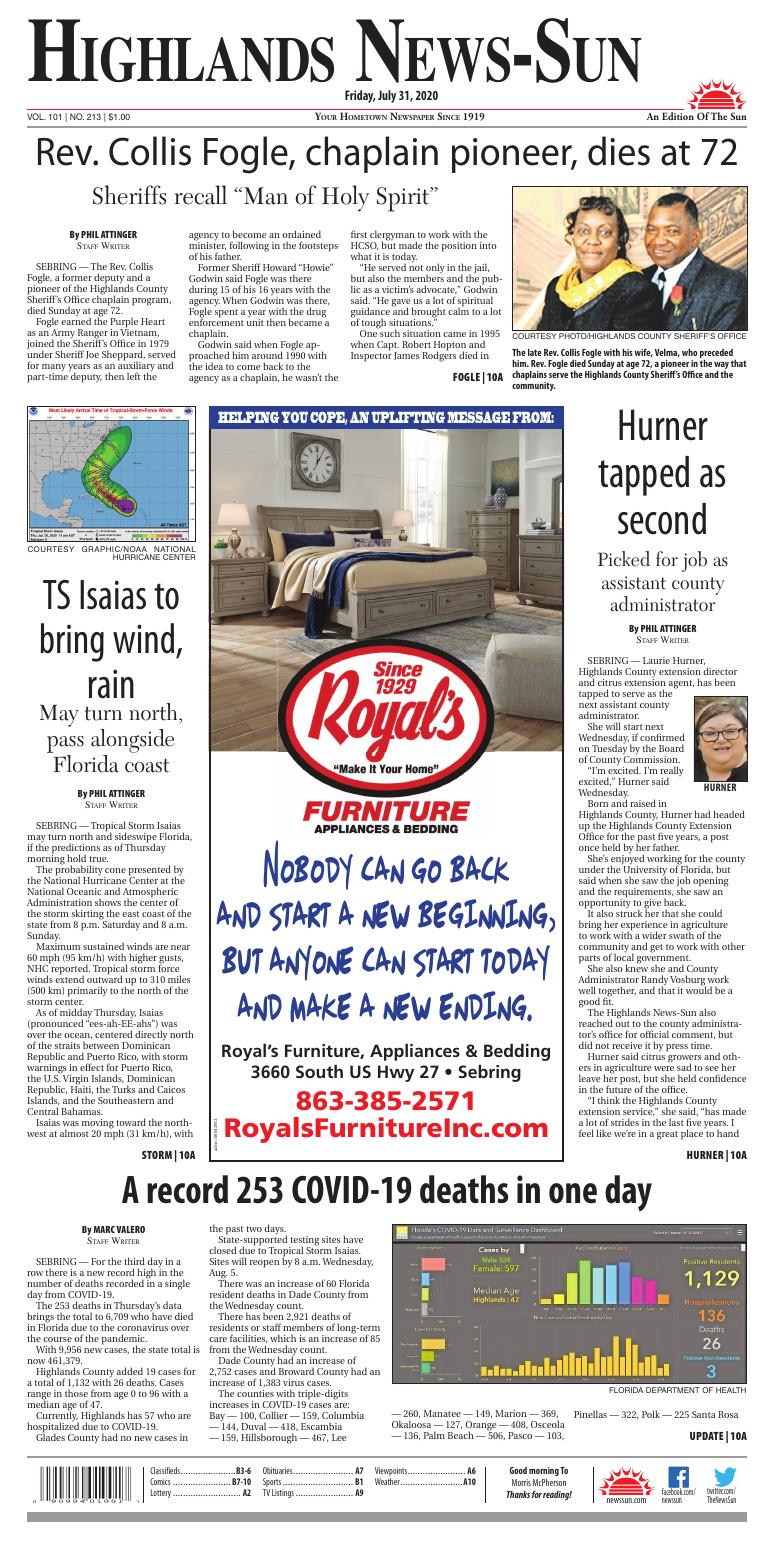 The late Rev. Collis Fogle with his wife, Velma, who preceded him. Rev. Fogle died Sunday at age 72, a pioneer in the way that chaplains serve the Highlands County Sheriff’s Office and the community.

SEBRING — The Rev. Collis Fogle, a former deputy and a pioneer of the Highlands County Sheriff’s Office chaplain program, died Sunday at age 72.

Fogle earned the Purple Heart as an Army Ranger in Vietnam, joined the Sheriff’s Office in 1979 under Sheriff Joe Sheppard, served for many years as an auxiliary and part-time deputy, then left the agency to become an ordained minister, following in the footsteps of his father.

Former Sheriff Howard “Howie” Godwin said Fogle was there during 15 of his 16 years with the agency. When Godwin was there, Fogle spent a year with the drug enforcement unit then became a chaplain.

Godwin said when Fogle approached him around 1990 with the idea to come back to the agency as a chaplain, he wasn’t the first clergyman to work with the HCSO, but made the position into what it is today.

“He served not only in the jail, but also the members and the public as a victim’s advocate,” Godwin said. “He gave us a lot of spiritual guidance and brought calm to a lot of tough situations.”

One such situation came in 1995 when Capt. Robert Hopton and Inspector James Rodgers died in the line of duty when the HCSO airplane crashed while tracking a burglary suspect near Lake Istokpoga.

Fogle delivered a sermon and their memorial service.

Former Sheriff Susan Benton, who succeeded Godwin, said one thing that was amazing about Fogle was how much of a no-nonsense soldier he was, as well as being a spiritual man.

“You couldn’t leave a room after he gave a sermon or a prayer without feeling moved,” Benton said.

Godwin went further to say that Fogle even brought healing. Many times when he prayed over people or on matters, “things got healed,” Godwin said.

“There’s so much that words don’t even describe the kind of man he was,” Godwin said.

“I [always] thought highly of him for his service to our country,” Schrader said.

“He never would take a paycheck, either, even though he worked countless hours,” Godwin said. “He was one of the greatest men I’ve ever known. He was tough but kind. He was godly and one of the best friends a person could have. He was a saint to me.”

Godwin also recalled that he and Fogle played music together, in a band called “Dandy Deputies” under Sheppard’s administration.

Retired Maj. Booker Johnson said Fogle was committed to the task the Lord had put on him to do — to minister to inmates and members of the agency.

“He gave back to the community,” Booker said.

Sheriff Paul Blackman commended Fogle as a mentor for many young deputies as well as a great community liaison for the Sheriff’s Office.

“I want to send condolences to all of his family,” Blackman said. “The community lost a great man when Rev. Fogle went home to be with the Lord.”

Fogle was preceded in death by his wife, Velma.

Due to COVID-19 concerns, space limitations and a large number of mourners, a private funeral service will be today at 10:30 a.m., available to see via livestream through the Highlands County Sheriff’s Office on Facebook.

SEBRING — For the third day in a row there is a new record high in the number of deaths recorded in a single day from COVID-19.

The 253 deaths in Thursday’s data brings the total to 6,709 who have died in Florida due to the coronavirus over the course of the pandemic.

Currently, Highlands has 57 who are hospitalized due to COVID-19.

Glades County had no new cases in the past two days.

There was an increase of 60 Florida resident deaths in Dade County from the Wednesday count.

There has been 2,921 deaths of residents or staff members of long-term care facilities, which is an increase of 85 from the Wednesday count.

Broward and Dade counties and the counties with triple-digit increase account for 8,681 of the total of new cases in Florida.

SEBRING — Tropical Storm Isaias may turn north and sideswipe Florida, if the predictions as of Thursday morning hold true.

The probability cone presented by the National Hurricane Center at the National Oceanic and Atmospheric Administration shows the center of the storm skirting the east coast of the state from 8 p.m. Saturday and 8 a.m. Sunday.

Maximum sustained winds are near 60 mph (95 km/h) with higher gusts, NHC reported. Tropical storm force winds extend outward up to 310 miles (500 km) primarily to the north of the storm center.

As of midday Thursday, Isaias (pronounced “ees-ah-EE-ahs”) was over the ocean, centered directly north of the straits between Dominican Republic and Puerto Rico, with storm warnings in effect for Puerto Rico, the U.S. Virgin Islands, Dominican Republic, Haiti, the Turks and Caicos Islands, and the Southeastern and Central Bahamas.

Isaias was moving toward the northwest at almost 20 mph (31 km/h), with a west-northwestward to northwestward motion, and expectation that the storm would slow as the center of Isaias moved over Hispaniola and near the Southeastern Bahamas by late Thursday/early Friday.

As of Thursday, tropical storm force winds were hitting the southern coast of Puerto Rico, with reports of sustained winds of 45 mph (72 km/h) with a gust to 54 mph (87 km/h).

A wind gust of 60 mph (96 km/h) was reported at Punta Cana on the eastern tip of the Dominican Republic.

By Friday night, Isaias should be over the Central Bahamas on approach to the Northwest Bahamas or southern Florida by Friday night or early Saturday morning.

Predictions were for life-threatening flash floods and mudslides, in rivers and small streams in the U.S. Virgin Islands, Puerto Rico and Hispaniola.

While Isaias may weaken Thursday from passing over Hispaniola, re-strengthening is forecast for Friday and Friday night.

Heavy rains associated with Isaias may start affecting South Florida by Saturday morning with the possibility of isolated flash and urban flooding, especially in low-lying and poorly drained areas.

Highlands County officials have asked residents to use this time to make sure they are prepared.

That includes reviewing emergency plan and considering what needs to be changed due to COVID-19, gathering fresh supplies for emergency kits, preparing property by cleaning up any loose objects in the yard, following NOAA National Weather Service updates and signing up for community emergency alerts at bit.ly/hcbccalert.

Also, Highlands County will provide the public 10 sandbags per person through Saturday from 7 a.m. to 6:30 p.m. at the Road and Bridge Department offices at 4344 George Blvd. in Sebring, East Winthrop Street in Avon Park and County Road 621 in Lake Placid.

People may fill those sandbags at:

When you arrive at the sandbag locations, stay in your vehicle. Bags will be brought to your car by a county employee.

SEBRING — Laurie Hurner, Highlands County extension director and citrus extension agent, has been tapped to serve as the next assistant county administrator.

She will start next Wednesday, if confirmed on Tuesday by the Board of County Commission.

She’s enjoyed working for the county under the University of Florida, but said when she saw the job opening and the requirements, she saw an opportunity to give back.

It also struck her that she could bring her experience in agriculture to work with a wider swath of the community and get to work with other parts of local government.

She also knew she and County Administrator Randy Vosburg work well together, and that it would be a good fit.

The Highlands News-Sun also reached out to the county administrator’s office for official comment, but did not receive it by press time.

Hurner said citrus growers and others in agriculture were sad to see her leave her post, but she held confidence in the future of the office.

“I think the Highlands County extension service,” she said, “has made a lot of strides in the last five years. I feel like we’re in a great place to hand it off to the next person to be in charge.”

She said she didn’t know how soon her position would get filled, between budgets and the COVID-19 pandemic “making things interesting,” but estimated a three to six-month time frame of an interim director.

For the previous 10 years, Hurner had served as the assistant director of Grower Affairs at Florida Citrus Mutual, directly responsible for maintaining and enhancing relationships between Citrus Mutual and growers in Highlands, Glades, Indian River, Martin, Okeechobee, Palm Beach, and St. Lucie counties.

Outside of University of Florida, Hurner is involved with the Highlands County Cattlewomen, The Mason G. Smoak Foundation and is an alumna of The Wedgworth Leadership Institute for Agriculture and Natural Resources.

Her father, Tim Hurner, was a three-decade employee of the extension office in Highlands County. He started as the 4-H and citrus agent in 1965 and became the county agent in 1977. 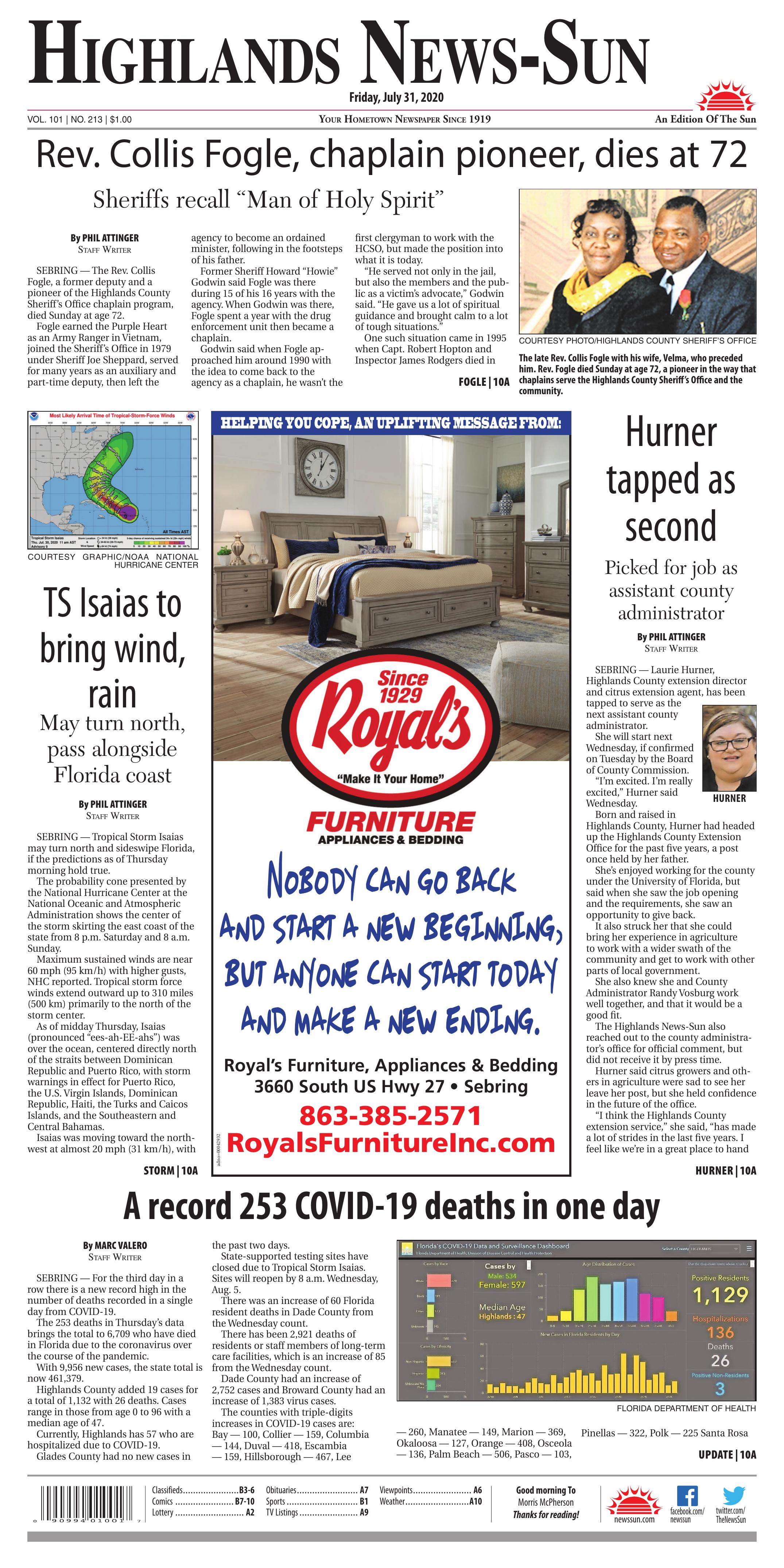