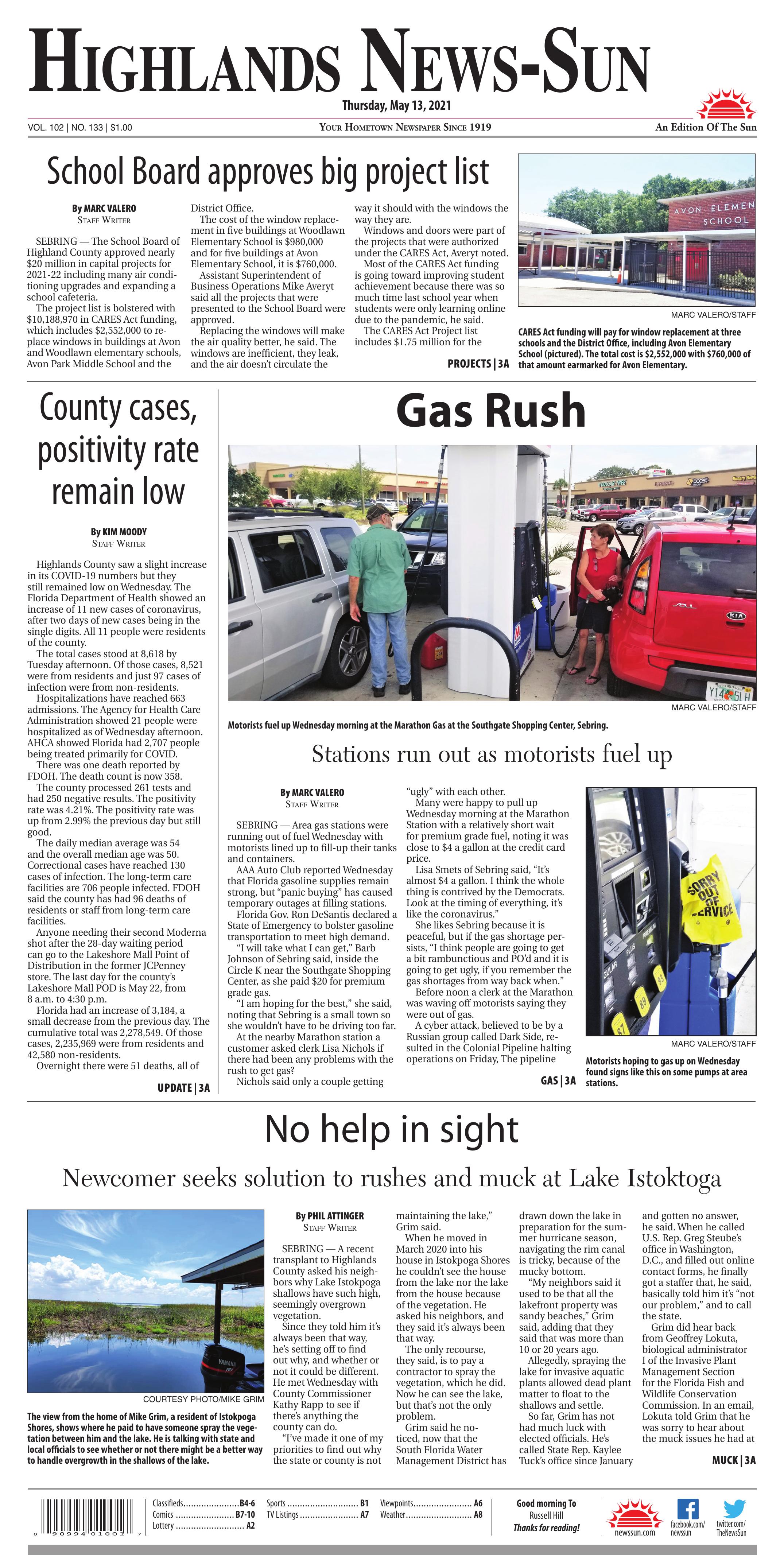 CARES Act funding will pay for window replacement at three schools and the District Office, including Avon Elementary School (pictured). The total cost is $2,552,000 with $760,000 of that amount earmarked for Avon Elementary.

SEBRING — The School Board of Highland County approved nearly $20 million in capital projects for 2021-22 including many air conditioning upgrades and expanding a school cafeteria.

The project list is bolstered with $10,188,970 in CARES Act funding, which includes $2,552,000 to replace windows in buildings at Avon and Woodlawn elementary schools, Avon Park Middle School and the District Office.

Assistant Superintendent of Business Operations Mike Averyt said all the projects that were presented to the School Board were approved.

Replacing the windows will make the air quality better, he said. The windows are inefficient, they leak, and the air doesn't circulate the way it should with the windows the way they are.

Windows and doors were part of the projects that were authorized under the CARES Act, Averyt noted.

Most of the CARES Act funding is going toward improving student achievement because there was so much time last school year when students were only learning online due to the pandemic, he said.

The CARES Act Project list includes $1.75 million for the expansion of the Lake Placid Elementary cafeteria.

"We are not sure if we can use the CARES Act funds, so we are still checking into that. I think the board wants to move forward on it and use the half-cent sales tax if we can't get the CARES funds, so it is going to be funded," Averyt said.

Lake Placid Elementary has one of the smallest cafeterias and they have always had issues with crowding. "Basically, we are trying to separate the kids," he said. "We have done other cafeteria projects.

"We did one at Woodlawn and we did one at Avon Elementary, but Lake Placid Elementary has never been done and it is the largest elementary school. It has been on their project list for 10 to 15 years so the board wants to move forward and fund it."

The other capital projects include adding air conditioning to the Avon Park and Sebring Middle school gymnasiums and the resurfacing of the running tracks at all three high schools with a rubberized material at a total cost of $958,000.

Other CARES Act funded projects include air-conditioning upgrades at 11 schools at a total cost of about $5 million and $416,970 for cameras for school buses.

Motorists fuel up Wednesday morning at the Marathon Gas at the Southgate Shopping Center, Sebring.

One last motorist fuels up Wednesday morning at the Marathon Gas at the Southgate Shopping Center as a clerk waits to mark the pump closed.

Motorists hoping to gas up on Wednesday found signs like this on some pumps at area stations.

SEBRING — Area gas stations were running out of fuel Wednesday with motorists lined up to fill-up their tanks and containers.

“I will take what I can get,” Barb Johnson of Sebring said, inside the Circle K near the Southgate Shopping Center, as she paid $20 for premium grade gas.

“I am hoping for the best,” she said, noting that Sebring is a small town so she wouldn’t have to be driving too far.

At the nearby Marathon station a customer asked clerk Lisa Nichols if there had been any problems with the rush to get gas?

Nichols said only a couple getting “ugly” with each other.

Many were happy to pull up Wednesday morning at the Marathon Station with a relatively short wait for premium grade fuel, noting it was close to $4 a gallon at the credit card price.

Lisa Smets of Sebring said, “It’s almost $4 a gallon. I think the whole thing is contrived by the Democrats. Look at the timing of everything, it’s like the coronavirus.”

Before noon a clerk at the Marathon was waving off motorists saying they were out of gas.

A cyber attack, believed to be by a Russian group called Dark Side, resulted in the Colonial Pipeline halting operations on Friday, The pipeline transports fuel from Texas to the Northeast, providing about 45 percent of the East Coast’s supply.{/span}

The Colonial Pipeline is still down, yet Florida remains well supplied with fuel, AAA reports. While there is not considered to be a gasoline “shortage” in Florida, there are reports of fuel outages at various gas stations, due to unusually strong demand.

“It’s likely that motorists are seeing reports about supply issues in other states — due to the pipeline — and are racing out to top off their tanks,” said Mark Jenkins, spokesman, AAA – The Auto Club Group. “The problem is, that surge in demand is what actually creates the supply issue, since gas stations can only hold so much fuel at a given time.”

Florida is not heavily reliant on the Colonial Pipeline. Ninety percent of Florida’s gasoline flows in through our ports on cargo ships, AAA reports. That gasoline is then driven to the pumps on tanker trucks.

“This is not a refinery issue. Gasoline is still being made and fuel continues sailing through Florida ports, regardless of whether Colonial Pipeline is operational,” Jenkins continued. “Florida is said to have access to plenty of gasoline. It’s now just a matter of getting the fuel where it’s needed, primarily those gas stations that are being tapped out due to panic buying.”

The view from the home of Mike Grim, a resident of Istokpoga Shores, shows where he paid to have someone spray the vegetation between him and the lake. He is talking with state and local officials to see whether or not there might be a better way to handle overgrowth in the shallows of the lake.

The view from a neighboring parcel to Mike Grim of Istokpoga Shores shows tall rushes that obscure the lake and, Grim said, seems to impede feeding wildlife.

The rim canal that serves residents of Lake Istokpoga has water right now, but at least one resident noted that the mucky bed of the canal makes it difficult to access the lake by boat, and might make passage impossible if water levels drop.

SEBRING — A recent transplant to Highlands County asked his neighbors why Lake Istokpoga shallows have such high, seemingly overgrown vegetation.

Since they told him it’s always been that way, he’s setting off to find out why, and whether or not it could be different. He met Wednesday with County Commissioner Kathy Rapp to see if there’s anything the county can do.

“I’ve made it one of my priorities to find out why the state or county is not maintaining the lake,” Grim said.

When he moved in March 2020 into his house in Istokpoga Shores he couldn’t see the house from the lake nor the lake from the house because of the vegetation. He asked his neighbors, and they said it’s always been that way.

The only recourse, they said, is to pay a contractor to spray the vegetation, which he did. Now he can see the lake, but that’s not the only problem.

Grim said he noticed, now that the South Florida Water Management District has drawn down the lake in preparation for the summer hurricane season, navigating the rim canal is tricky, because of the mucky bottom.

“My neighbors said it used to be that all the lakefront property was sandy beaches,” Grim said, adding that they said that was more than 10 or 20 years ago.

Allegedly, spraying the lake for invasive aquatic plants allowed dead plant matter to float to the shallows and settle.

So far, Grim has not had much luck with elected officials. He’s called State Rep. Kaylee Tuck’s office since January and gotten no answer, he said. When he called U.S. Rep. Greg Steube’s office in Washington, D.C., and filled out online contact forms, he finally got a staffer that, he said, basically told him it’s “not our problem,” and to call the state.

Grim did hear back from Geoffrey Lokuta, biological administrator I of the Invasive Plant Management Section for the Florida Fish and Wildlife Conservation Commission. In an email, Lokuta told Grim that he was sorry to hear about the muck issues he had at Istokpoga Shores.

“This is a longstanding issue on Lake Istokpoga that we hear of regularly. Many canals on the lake deal with either shallow water [or] muck issues each year when the water drops,” Lokuta wrote. “Until these canals are dredged either by the private residents or the county again, this will likely be an ongoing issue.”

According to Lokuta’s email, different aspects of the lake environment are managed directly by different state agencies, and the muck, sand and silt on the canal bottom is regulated by the Florida Department of Environmental Protection. Dredging it out, he states, would likely require a DEP permit. Canal dredging a lengthy process, gets done either by an individual or by the county.

Lokuta was not certain when or if the county had dredged the canals in the past, but said if FWC receives approval to drawdown Lake Istokpoga again, that would be a good time to dredge the canals. However, he said FWC can’t help with dredging issues, as the agency only manages aquatic vegetation for habitat enhancement/restoration or invasive plant management for the benefit of fish and wildlife.

“The only canal work FWC does is spaying invasive floating plants in canals so they don’t infest the main lake where the bulk of our plant management occurs,” Lokuta said.

Lokuta said he’d copied his response to a contact who might have more information for Grim. As for today, Grim hopes to learn more from, or perhaps inform, a county commissioner.

For now, he said, it seems one group really enjoys the grasses he had sprayed on the lake: Birds who’ve come to feed in his patch of cleared grasses.

“The birds in my section are thick. It just shows what you can do if you manage it right,” Grim said. “[The] other stuff is so thick, they can’t even get into it.”

Highlands County saw a slight increase in its COVID-19 numbers but they still remained low on Wednesday. The Florida Department of Health showed an increase of 11 new cases of coronavirus, after two days of new cases being in the single digits. All 11 people were residents of the county.

The total cases stood at 8,618 by Tuesday afternoon. Of those cases, 8,521 were from residents and just 97 cases of infection were from non-residents.

Hospitalizations have reached 663 admissions. The Agency for Health Care Administration showed 21 people were hospitalized as of Wednesday afternoon. AHCA showed Florida had 2,707 people being treated primarily for COVID.

There was one death reported by FDOH. The death count is now 358.

Anyone needing their second Moderna shot after the 28-day waiting period can go to the Lakeshore Mall Point of Distribution in the former JCPenney store. The last day for the county’s Lakeshore Mall POD is May 22, from 8 a.m. to 4:30 p.m.

Overnight there were 51 deaths, all of whom were residents.

There were 639 new deaths reported, a decrease of 247 from last Tuesday. The seven-day average of deaths is 618.

There were more hospitalizations and ICU cases on Tuesday than the previous week, although part of it could be due to a Texas backlog, with the state reporting higher-than-normal numbers over the past four days. While Texas is up, the rest of the country is down.

The country’s positivity rate dropped to 2.85%, which is 36% lower than we were seeing a month ago and 15% lower than last week.

According to the Johns Hopkins University Center for Systems Science and Engineering, the U.S. has seen 32.78 million cases and had 582,923 deaths.

Globally, there have been 159.8 million cases and 3.32 million deaths.