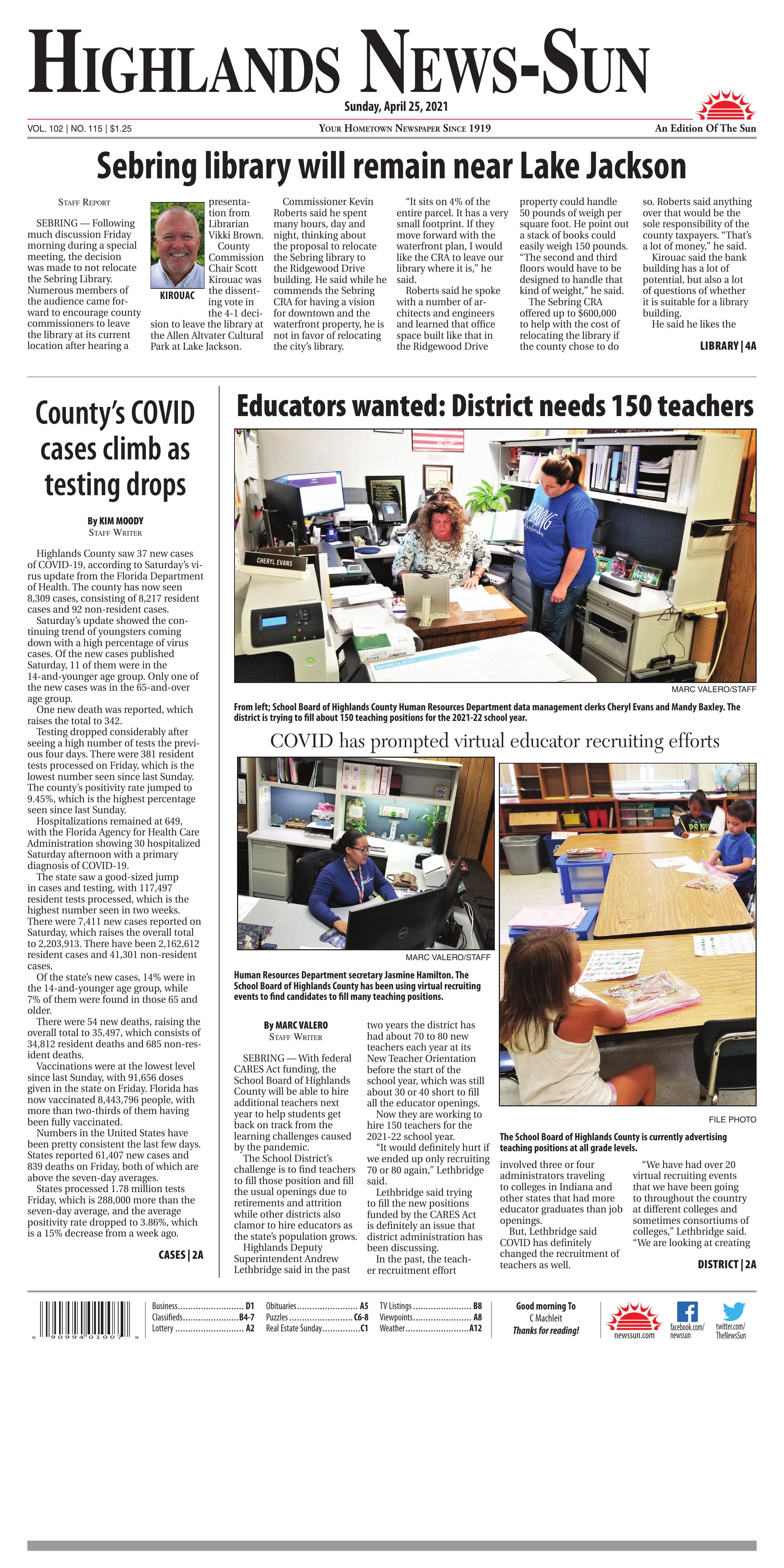 SEBRING — Following much discussion Friday morning during a special meeting, the decision was made to not relocate the Sebring Library. Numerous members of the audience came forward to encourage county commissioners to leave the library at its current location after hearing a presentation from Librarian Vikki Brown.

County Commission Chair Scott Kirouac was the dissenting vote in the 4-1 decision to leave the library at the Allen Altvater Cultural Park at Lake Jackson.

Commissioner Kevin Roberts said he spent many hours, day and night, thinking about the proposal to relocate the Sebring library to the Ridgewood Drive building. He said while he commends the Sebring CRA for having a vision for downtown and the waterfront property, he is not in favor of relocating the city’s library.

“It sits on 4% of the entire parcel. It has a very small footprint. If they move forward with the waterfront plan, I would like the CRA to leave our library where it is,” he said.

Roberts said he spoke with a number of architects and engineers and learned that office space built like that in the Ridgewood Drive property could handle 50 pounds of weigh per square foot. He point out a stack of books could easily weigh 150 pounds. “The second and third floors would have to be designed to handle that kind of weight,” he said.

The Sebring CRA offered up to $600,000 to help with the cost of relocating the library if the county chose to do so. Roberts said anything over that would be the sole responsibility of the county taxpayers. “That’s a lot of money,” he said.

Kirouac said the bank building has a lot of potential, but also a lot of questions of whether it is suitable for a library building.

He said he likes the vision that is coming together for the waterfront property. Many have been asked what they would like to see at Lake Jackson and they have responded more accessibility.

The CRA is taking a different approach than previous boards, such as buying downtown properties, refurbishing them and selling them in order to make improvements to the downtown.

Kirouac said he is not in favor of completely walking away from the idea of moving the library to Ridgewood without looking at it further. He countered with a motion to send the CRA a letter of intent for exchange of the property to include cost share terms, a feasibility study, a structural engineering review, and a cost estimate study. His motion failed for lack of a second.

In Brown’s presentation, she told commissioners they did a digital survey of their library patrons in which they received about 150 responses. The survey asked what they saw the future of the library as being. Among the top response was a bigger building; more items to borrow, both print and digital; and more programs. Asked what they would like added, patrons replied a meeting/multipurpose area, a young adult area and a children’s area. When asked if they were satisfied with the current location of the library, 80.8% replied they were. What would improve the current location? The responses indicated a more welcoming entrance and possibly a reading garden. Patrons also said they would like to see the current location enlarged and updated.

The current library building is a total of 15,284 square feet, of which 1,890 is occupied by the Sebring Historical Society. The “horseshoe building,” the semi-circular white (former) Wachovia Bank building at 228 N. Ridgewood Drive, has a total of 19,054 square feet under the main roof and an additional 2,560 square feet in the teller building.

Brown said staff estimated the cost of moving the library to Ridgewood Drive would be in the area of $2 million. Recurring costs would see another $81,000 added to the library’s budget, with the primary cost being for additional staff for the larger building.

Library patron Joshua Klatt said he has been in all seven libraries of the Heartland Library Consortium, including the one on the Seminole Indian Reservation in Brighton. “There is not a single library that is as beautifully location and situated as the Sebring Library. It is a great draw for parents. They can come to the library and had things they can do with their children. It amazes me that there could be a serious consideration to spend money to move the library from a location that the citizens are happy with. I believe we can find way to expand it in its current location,” he said.

Sebring attorney Cliff Rhoades said Ridgewood Drive has suffered through the years as can be seen by the vacant lot where the Nan-Ces-O-Wee once stood. “I am in favor of the commission pursuing this idea. I think the engineers can figure out a way to make the building work.”

From left; School Board of Highlands County Human Resources Department data management clerks Cheryl Evans and Mandy Baxley. The district is trying to fill about 150 teaching positions for the 2021-22 school year.

Human Resources Department secretary Jasmine Hamilton. The School Board of Highlands County has been using virtual recruiting events to find candidates to fill many teaching positions.

The School Board of Highlands County is currently advertising teaching positions at all grade levels.

SEBRING — With federal CARES Act funding, the School Board of Highlands County will be able to hire additional teachers next year to help students get back on track from the learning challenges caused by the pandemic.

The School District’s challenge is to find teachers to fill those position and fill the usual openings due to retirements and attrition while other districts also clamor to hire educators as the state’s population grows.

Highlands Deputy Superintendent Andrew Lethbridge said in the past two years the district has had about 70 to 80 new teachers each year at its New Teacher Orientation before the start of the school year, which was still about 30 or 40 short to fill all the educator openings.

“It would definitely hurt if we ended up only recruiting 70 or 80 again,” Lethbridge said.

Lethbridge said trying to fill the new positions funded by the CARES Act is definitely an issue that district administration has been discussing.

In the past, the teacher recruitment effort involved three or four administrators traveling to colleges in Indiana and other states that had more educator graduates than job openings.

But, Lethbridge said COVID has definitely changed the recruitment of teachers as well.

“We have had over 20 virtual recruiting events that we have been going to throughout the country at different colleges and sometimes consortiums of colleges,” Lethbridge said. “We are looking at creating a virtual fair.”

The district is targeting Hillsborough County, which cut many teaching positions due to budget issues, he said. Being so close to Highlands County, they hope to “tap into that pipeline” of administrators to coaches to teachers who have just lost their job who could potentially relocate.

The Hillsborough County School District, with a budget deficit of more than $100 million, laid off about 1,000 teachers a week ago.

The Highlands District is working on a social media recruitment effort to have all of its employees share the message in what Lethbridge described as a “grassroots movement.”

“We have seen different families coming to Florida because our schools have remained open and there are so many parts of the county that haven’t,” he said. The message would be to come work in Florida so your kids can go to school.

In trying to fill the positions, “There is a real concern for multiple reasons,” he said. The increase in the number of positions, then filling the openings from retirements and normal attrition of people moving and other reasons including a few who decided to retire due to the pandemic.

For those with a bachelor’s degree and who are looking for a career change, the Human Resources Department would definitely like to talk to them, Lethbridge said.

For more information call this district’s main number, 471-5555, and ask for Tiffany Henderson.

Highlands County saw 37 new cases of COVID-19, according to Saturday’s virus update from the Florida Department of Health. The county has now seen 8,309 cases, consisting of 8,217 resident cases and 92 non-resident cases.

Saturday’s update showed the continuing trend of youngsters coming down with a high percentage of virus cases. Of the new cases published Saturday, 11 of them were in the 14-and-younger age group. Only one of the new cases was in the 65-and-over age group.

One new death was reported, which raises the total to 342.

Hospitalizations remained at 649, with the Florida Agency for Health Care Administration showing 30 hospitalized Saturday afternoon with a primary diagnosis of COVID-19.

Vaccinations were at the lowest level since last Sunday, with 91,656 doses given in the state on Friday. Florida has now vaccinated 8,443,796 people, with more than two-thirds of them having been fully vaccinated.

Numbers in the United States have been pretty consistent the last few days. States reported 61,407 new cases and 839 deaths on Friday, both of which are above the seven-day averages.

States processed 1.78 million tests Friday, which is 288,000 more than the seven-day average, and the average positivity rate dropped to 3.86%, which is a 15% decrease from a week ago.

Michigan continues to move in the right direction, with seven-day averages for new cases and positivity rate both 25% lower than a week ago. Deaths have climbed slightly from a seven-day average of 54 to 61 over the last week.

Texas has also seen a significant drop in positivity rate, with a 36% decrease from a week ago. The state’s testing has also increased 53% over that time.

According to the Johns Hopkins University Center for Systems Science and Engineering, the U.S. has seen 32.03 million cases and had 571,547 deaths.

The global numbers continue to rise at a fast pace, with India seeing some terrible numbers. There have been 145.9 million cases and 3.09 million deaths.