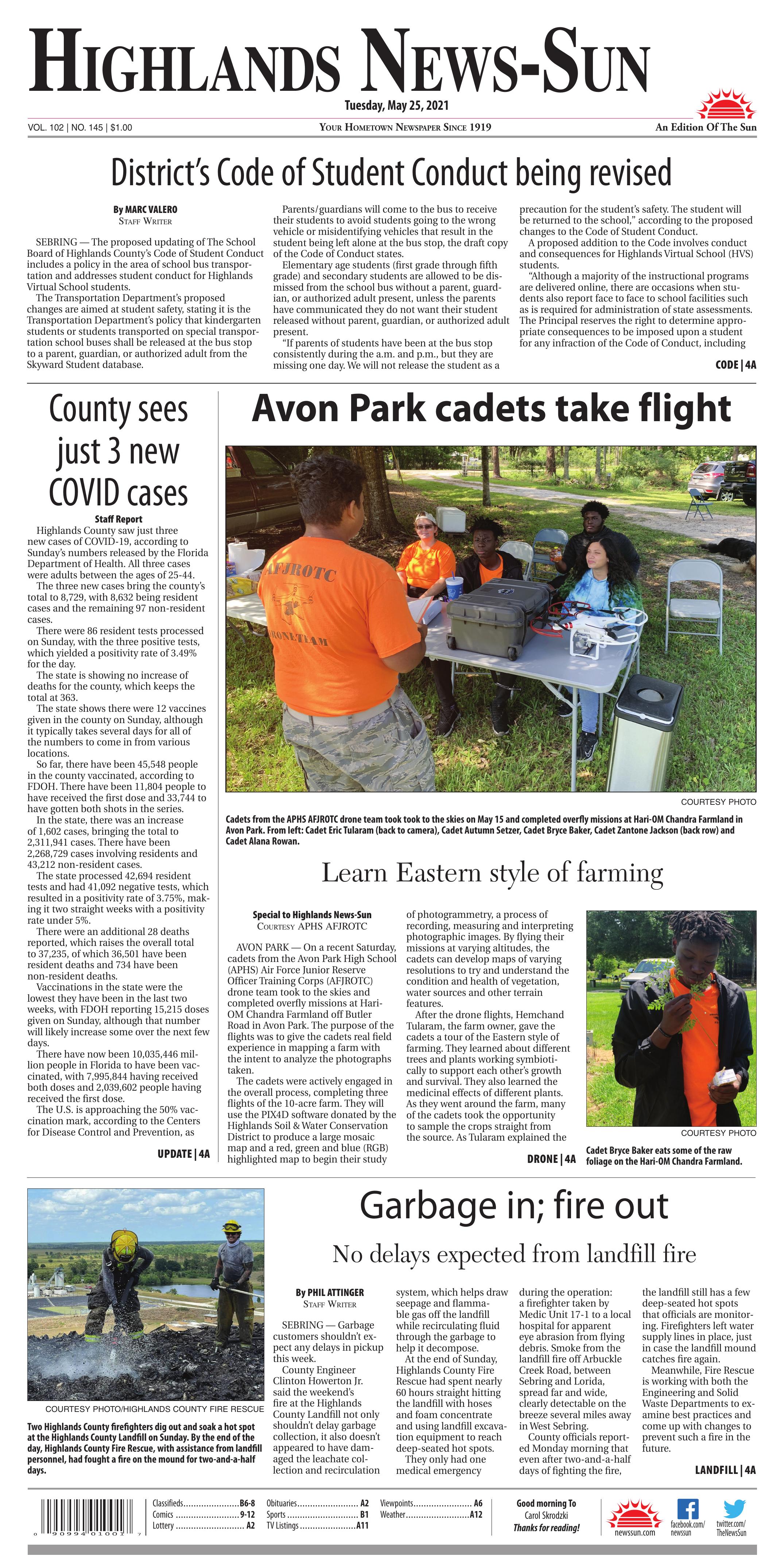 SEBRING — The proposed updating of The School Board of Highlands County’s Code of Student Conduct includes a policy in the area of school bus transportation and addresses student conduct for Highlands Virtual School students.

Parents/guardians will come to the bus to receive their students to avoid students going to the wrong vehicle or misidentifying vehicles that result in the student being left alone at the bus stop, the draft copy of the Code of Conduct states.

“If parents of students have been at the bus stop consistently during the a.m. and p.m., but they are missing one day. We will not release the student as a precaution for the student’s safety. The student will be returned to the school,” according to the proposed changes to the Code of Student Conduct.

A proposed addition to the Code involves conduct and consequences for Highlands Virtual School (HVS) students.

“Although a majority of the instructional programs are delivered online, there are occasions when students also report face‐to‐face to school facilities such as is required for administration of state assessments. The Principal reserves the right to determine appropriate consequences to be imposed upon a student for any infraction of the Code of Conduct, including misconduct not specifically listed.

“HVS reserves the right to amend the content in this handbook at any time throughout the school year, without notice.”

A proposed addition to the Parent Guide section of the Code concerning meals states, “Older students may also pay for meals by giving cash and/or checks to the cashier.

“Payments are accepted by credit/debit cards by going to: https://family.titank12.com/ where you can make prepayments, view transactions on your child’s account and arrange to receive email reminders when the meal account balance is low.”

Food and Nutrition Director Tim Thompson said payment has always been accepted at the cafeteria, but now it may be specified in the Parent Guide.

Also, this school year they have been trying to do as much touch-less interaction with students due to COVID and there was a limited amount of ala carte items so there was not a lot of cash changing hands, he said.

The proposed changes to the Code of Student Conduct/Parent Guide will go through the advertisement and adoption process by The School Board of Highlands County.

Cadet Bryce Baker eats some of the raw foliage on the Hari-OM Chandra Farmland.

AVON PARK — On a recent Saturday, cadets from the Avon Park High School (APHS) Air Force Junior Reserve Officer Training Corps (AFJROTC) drone team took to the skies and completed overfly missions at Hari-OM Chandra Farmland off Butler Road in Avon Park. The purpose of the flights was to give the cadets real field experience in mapping a farm with the intent to analyze the photographs taken.

The cadets were actively engaged in the overall process, completing three flights of the 10-acre farm. They will use the PIX4D software donated by the Highlands Soil & Water Conservation District to produce a large mosaic map and a red, green and blue (RGB) highlighted map to begin their study of photogrammetry, a process of recording, measuring and interpreting photographic images. By flying their missions at varying altitudes, the cadets can develop maps of varying resolutions to try and understand the condition and health of vegetation, water sources and other terrain features.

After the drone flights, Hemchand Tularam, the farm owner, gave the cadets a tour of the Eastern style of farming. They learned about different trees and plants working symbiotically to support each other’s growth and survival. They also learned the medicinal effects of different plants. As they went around the farm, many of the cadets took the opportunity to sample the crops straight from the source. As Tularam explained the flavors or effects on taste buds, the cadets were quick to experiment. The farm operates year-round and can be found at etsy.com/shop/HariOMChandraFarm

Started five years ago with one cadet, the team has grown to 10 cadets wanting to learn about drones and drone operations. Under the supervision of an FAA-certified drone pilot, the cadets take turns teaching each other various components to complete safe operations. Before they walk out the door, they make the determination of whether or not the weather or other conditions are safe for the flight. All missions begin with a weather report and a mission plan briefing that cadets pull from a weather website. These weather reports require deciphering and the cadets challenge each other on a regular basis to read them the quickest. They each understand what their purpose is and who will do what task for a successful mission.

The APHS AFJROTC provides extracurricular opportunities in drones, rocketry, drill and ceremonies, color guard, fitness and many others. Multiple academic and physical options are available. Starting in the 2021-2022 school year, first year freshman cadets will earn their Personal Career and School Development Skills requirement and online education component graduation requirements. If a student completes two years of AFJROTC, they not only earn elective credit but satisfy their performing arts and half of their physical education graduation requirement.

The cadets currently are flying an aging DJI Phantom 3 Advanced drone. This platform flies at approximately 25 mph and takes quality images for analysis. The limitation is the age and many locations have discontinued servicing. Also, many software programs are no longer updating versions for compatibility.

The cadets are actively fundraising to acquire an agriculture specific drone with a special camera to better read crop conditions. They started fundraising this year to acquire some smaller drones to teach basic flight skills. Four Ryze Tello drones were donated and flown all school year.

Highlands County Landfill personnel position a water truck over a hole in the landfill opened by one of their excavators to help fight the fire that closed the landfill for more than two days this weekend.

Three Highlands County firefighters standby on Sunday as one of them directs a stream of water onto the smoldering county landfill.

Two Highlands County firefighters examine the situation along the ridge of the county landfill Sunday as the fire there shows signs of abating.

County Engineer Clinton Howerton Jr. said the weekend’s fire at the Highlands County Landfill not only shouldn’t delay garbage collection, it also doesn’t appeared to have damaged the leachate collection and recirculation system, which helps draw seepage and flammable gas off the landfill while recirculating fluid through the garbage to help it decompose.

They only had one medical emergency during the operation: a firefighter taken by Medic Unit 17-1 to a local hospital for apparent eye abrasion from flying debris. Smoke from the landfill fire off Arbuckle Creek Road, between Sebring and Lorida, spread far and wide, clearly detectable on the breeze several miles away in West Sebring.

County officials reported Monday morning that even after two-and-a-half days of fighting the fire, the landfill still has a few deep-seated hot spots that officials are monitoring. Firefighters left water supply lines in place, just in case the landfill mound catches fire again.

Meanwhile, Fire Rescue is working with both the Engineering and Solid Waste Departments to examine best practices and come up with changes to prevent such a fire in the future.

This past week was the second time in a month that the landfill caught fire from something unknown but not attributed to a lightning strike, according to Howerton.

Water supply retention and storage ponds onsite provided more than 250,000 gallons of water for the fire response, according to Fire Rescue officials on Sunday alone. Tankers drew a similar amount on Saturday, resulting in more than half a million gallons of water going into the landfill to douse the blaze.

The incident even drew stand-up assistance from neighboring counties, putting engines and tankers on alert at the county lines to provide assistance, if needed.

Howerton said Monday, despite all the fire activity on the landfill mound, he did not expect to see any delays in garbage collection. Sun ‘N Lake of Sebring told residents to expect recycling collection to resume on Thursday, and asked residents to remove any bins on the curb until that time.

Anyone with questions about their neighborhood’s garbage or recycling collection could contact Waste Connections at 863-655-0005.

Highlands County Government at highlandsfl.gov reports that Waste Connections collects garbage and recycling curbside from more than 37,658 residences in the unincorporated areas, in accordance with contract, paid through an annual non-ad valorem assessment of $173 per dwelling.

The county warns at highlandsfl.gov that certain items are not collected by curbside service, either because they will not break down in the landfill, tend to be in quantities too large for automated trucks to load or carry, or because they pose a safety hazard, such as being flammable. Those items include:

- Solid waste generated on commercial property or from industrial processes.

- Roofing material generated, collected and transported by a roofing company.

Residents must secure all household garbage in garbage bags before putting them in the curbside bins, to reduce litter and odors. The county also recommends they wrap broken glass, ceramics or other sharp objects in small amounts of newspaper or thick wrapping materials such as bubble wrap or cardboard to prevent them falling out or causing injury.

Highlands County saw just three new cases of COVID-19, according to Sunday’s numbers released by the Florida Department of Health. All three cases were adults between the ages of 25-44.

The three new cases bring the county’s total to 8,729, with 8,632 being resident cases and the remaining 97 non-resident cases.

There were 86 resident tests processed on Sunday, with the three positive tests, which yielded a positivity rate of 3.49% for the day.

The state is showing no increase of deaths for the county, which keeps the total at 363.

The state shows there were 12 vaccines given in the county on Sunday, although it typically takes several days for all of the numbers to come in from various locations.

So far, there have been 45,548 people in the county vaccinated, according to FDOH. There have been 11,804 people to have received the first dose and 33,744 to have gotten both shots in the series.

Vaccinations in the state were the lowest they have been in the last two weeks, with FDOH reporting 15,215 doses given on Sunday, although that number will likely increase some over the next few days.

The U.S. is approaching the 50% vaccination mark, according to the Centers for Disease Control and Prevention, as 163,907,827 people have received at least one, which is 49.4% of the population. The percentage of the country that is considered fully vaccinated is 39.3%.

Among those 12 and over, the percentage climbs to 58.5%, while 61.5% of all adults have received at least one dose of the vaccine.

Seniors have been getting vaccinated at a higher rate than any other group, with 85.4% of those 65 and over having received at least one dose and 74% of seniors having been fully vaccinated.

According to the John Hopkins University Center for Systems Science and Engineering, the U.S. has now had a total of 33.13 million cases and had 590,105 deaths.

Globally, there have been 166.9 million cases and 3.47 million deaths.