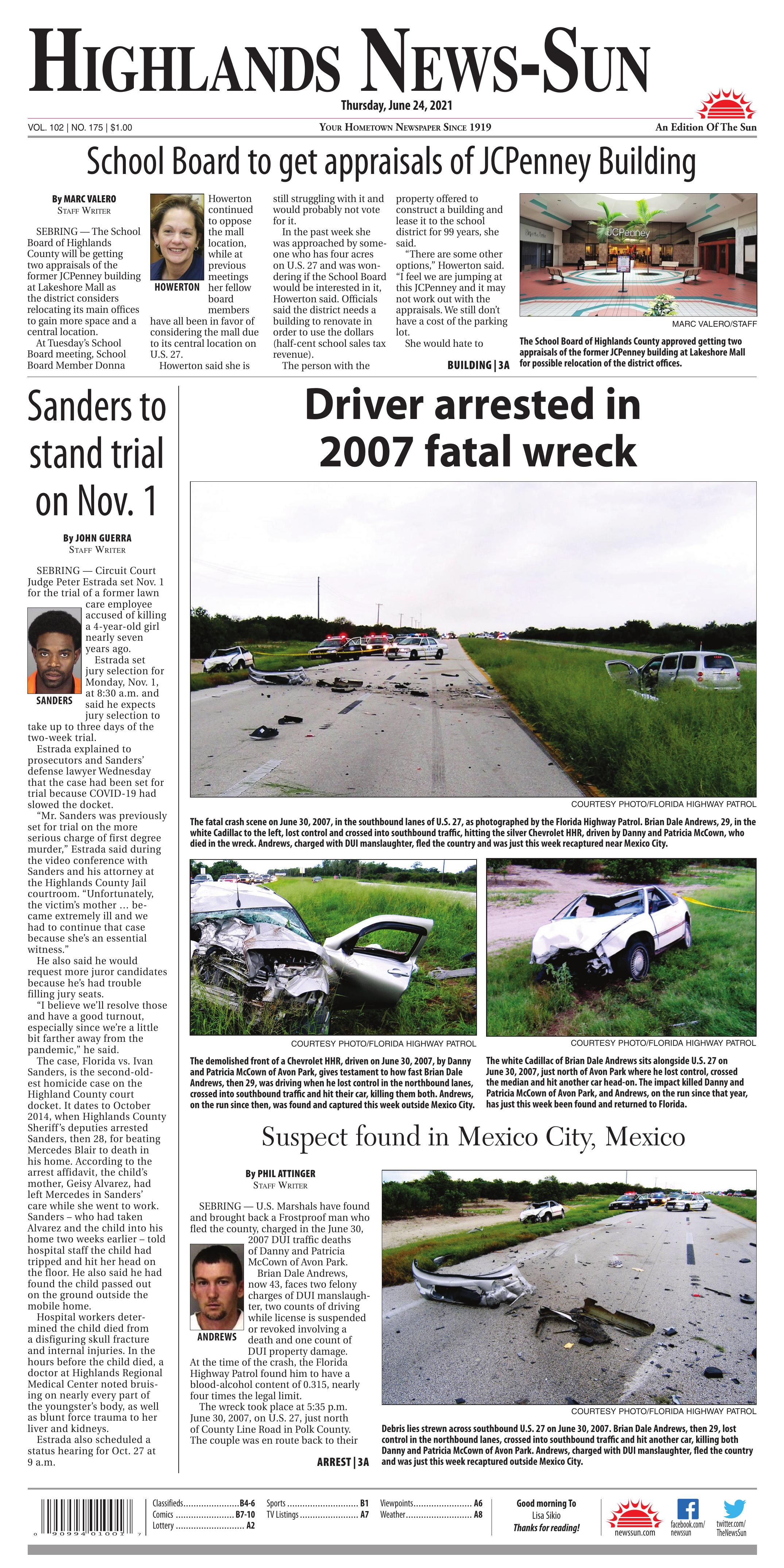 The School Board of Highlands County approved getting two appraisals of the former JCPenney building at Lakeshore Mall for possible relocation of the district offices.

SEBRING — The School Board of Highlands County will be getting two appraisals of the former JCPenney building at Lakeshore Mall as the district considers relocating its main offices to gain more space and a central location.

At Tuesday’s School Board meeting, School Board Member Donna Howerton continued to oppose the mall location, while at previous meetings her fellow board members have all been in favor of considering the mall due to its central location on U.S. 27.

Howerton said she is still struggling with it and would probably not vote for it.

In the past week she was approached by someone who has four acres on U.S. 27 and was wondering if the School Board would be interested in it, Howerton said. Officials said the district needs a building to renovate in order to use the dollars (half-cent school sales tax revenue).

The person with the property offered to construct a building and lease it to the school district for 99 years, she said.

“There are some other options,” Howerton said. “I feel we are jumping at this JCPenney and it may not work out with the appraisals. We still don’t have a cost of the parking lot.

She would hate to spend $10,000 on appraisals of the JCPenney building without looking at other options, she said.

Superintendent Brenda Longshore said when the district starting thinking about the amount of property needed for a new building it was around eight acres rather than four acres.

There are a lot of possibilities, Longshore added.

Assistant Superintendent of Business Operations Mike Averyt said the JCPenney appraisal would include a portion of the parking lot as well, if the board wants to move toward purchasing parking.

Howerton asked if there was an asking price for the parking?

Averyt responded that has not been negotiated yet. The district wants the appraisal before starting the negotiations.

Howerton said the U.S. 27 property owner is someone well known and would stand behind their word.

The motion was approved by a 4-1 vote with Howerton voting “no.”

The JCPenney building has 62,120 square feet with 392 parking spaces. The Lakeshore Mall owner had an asking price of $2,400,000 that is negotiable, the district stated in March.

Remodeling the former department store would cost an estimated $7.5 million.

The district had estimated, for a newly constructed building, the costs would be: $150,000 for eight acres of property in a good location, $1 million for site preparation and $14 million to construct a building.

The fatal crash scene on June 30, 2007, in the southbound lanes of U.S. 27, as photographed by the Florida Highway Patrol. Brian Dale Andrews, 29, in the white Cadillac to the left, lost control and crossed into southbound traffic, hitting the silver Chevrolet HHR, driven by Danny and Patricia McCown, who died in the wreck. Andrews, charged with DUI manslaughter, fled the country and was just this week recaptured near Mexico City.

Debris lies strewn across southbound U.S. 27 on June 30, 2007. Brian Dale Andrews, then 29, lost control in the northbound lanes, crossed into southbound traffic and hit another car, killing both Danny and Patricia McCown of Avon Park. Andrews, charged with DUI manslaughter, fled the country and was just this week recaptured outside Mexico City.

The demolished front of a Chevrolet HHR, driven on June 30, 2007, by Danny and Patricia McCown of Avon Park, gives testament to how fast Brian Dale Andrews, then 29, was driving when he lost control in the northbound lanes, crossed into southbound traffic and hit their car, killing them both. Andrews, on the run since then, was found and captured this week outside Mexico City.

The white Cadillac of Brian Dale Andrews sits alongside U.S. 27 on June 30, 2007, just north of Avon Park where he lost control, crossed the median and hit another car head-on. The impact killed Danny and Patricia McCown of Avon Park, and Andrews, on the run since that year, has just this week been found and returned to Florida.

SEBRING — U.S. Marshals have found and brought back a Frostproof man who fled the county, charged in the June 30, 2007 DUI traffic deaths of Danny and Patricia McCown of Avon Park.

Brian Dale Andrews, now 43, faces two felony charges of DUI manslaughter, two counts of driving while license is suspended or revoked involving a death and one count of DUI property damage. At the time of the crash, the Florida Highway Patrol found him to have a blood-alcohol content of 0.315, nearly four times the legal limit.

The wreck took place at 5:35 p.m. June 30, 2007, on U.S. 27, just north of County Line Road in Polk County. The couple was en route back to their home in Avon Park. News reports at the time said that they had just had their 33rd wedding anniversary the day before the wreck, and had gone shopping that day in Lake Wales for a gift for their granddaughter’s upcoming birthday.

According to the FHP tips website, Andrews was northbound on U.S. 27 that day in a 1992 white Cadillac when he lost control and entered the southbound lanes. The front of his car hit the front of the McCowns’ car — a silver Chevrolet HHR — killing them, and then his car hit another southbound vehicle.

After his arrest, he did not show up at the arraignment for his charges, and FHP has been looking for him ever since, especially Trooper Chris Wells. FHP had a tip line at intelligence@flhsmv.gov, and a recent anonymous tipster notified Wells of a possible sighting of Andrews in a region southwest of Mexico City. Coordination with the United States Marshals Service resulted in Andrews’ capture on Monday. He was returned to the United States on Wednesday.

The McCowns, both 59, were both natives of Warren County, Kentucky. Danny was a self-employed small business owner, member of the U.S. Army National Guard and had served 12 years with the Bowling Green Police Department in Kentucky. Patricia McCown was the Queen Mother of the Highlands County Red Hatters.

Estrada explained to prosecutors and Sanders’ defense lawyer Wednesday that the case had been set for trial because COVID-19 had slowed the docket.

“Mr. Sanders was previously set for trial on the more serious charge of first degree murder,” Estrada said during the video conference with Sanders and his attorney at the Highlands County Jail courtroom. “Unfortunately, the victim’s mother … became extremely ill and we had to continue that case because she’s an essential witness.”

He also said he would request more juror candidates because he’s had trouble filling jury seats.

“I believe we’ll resolve those and have a good turnout, especially since we’re a little bit farther away from the pandemic,” he said.

The case, Florida vs. Ivan Sanders, is the second-oldest homicide case on the Highland County court docket. It dates to October 2014, when Highlands County Sheriff’s deputies arrested Sanders, then 28, for beating Mercedes Blair to death in his home. According to the arrest affidavit, the child’s mother, Geisy Alvarez, had left Mercedes in Sanders’ care while she went to work. Sanders – who had taken Alvarez and the child into his home two weeks earlier – told hospital staff the child had tripped and hit her head on the floor. He also said he had found the child passed out on the ground outside the mobile home.

Hospital workers determined the child died from a disfiguring skull fracture and internal injuries. In the hours before the child died, a doctor at Highlands Regional Medical Center noted bruising on nearly every part of the youngster’s body, as well as blunt force trauma to her liver and kidneys.

Estrada also scheduled a status hearing for Oct. 27 at 9 a.m.