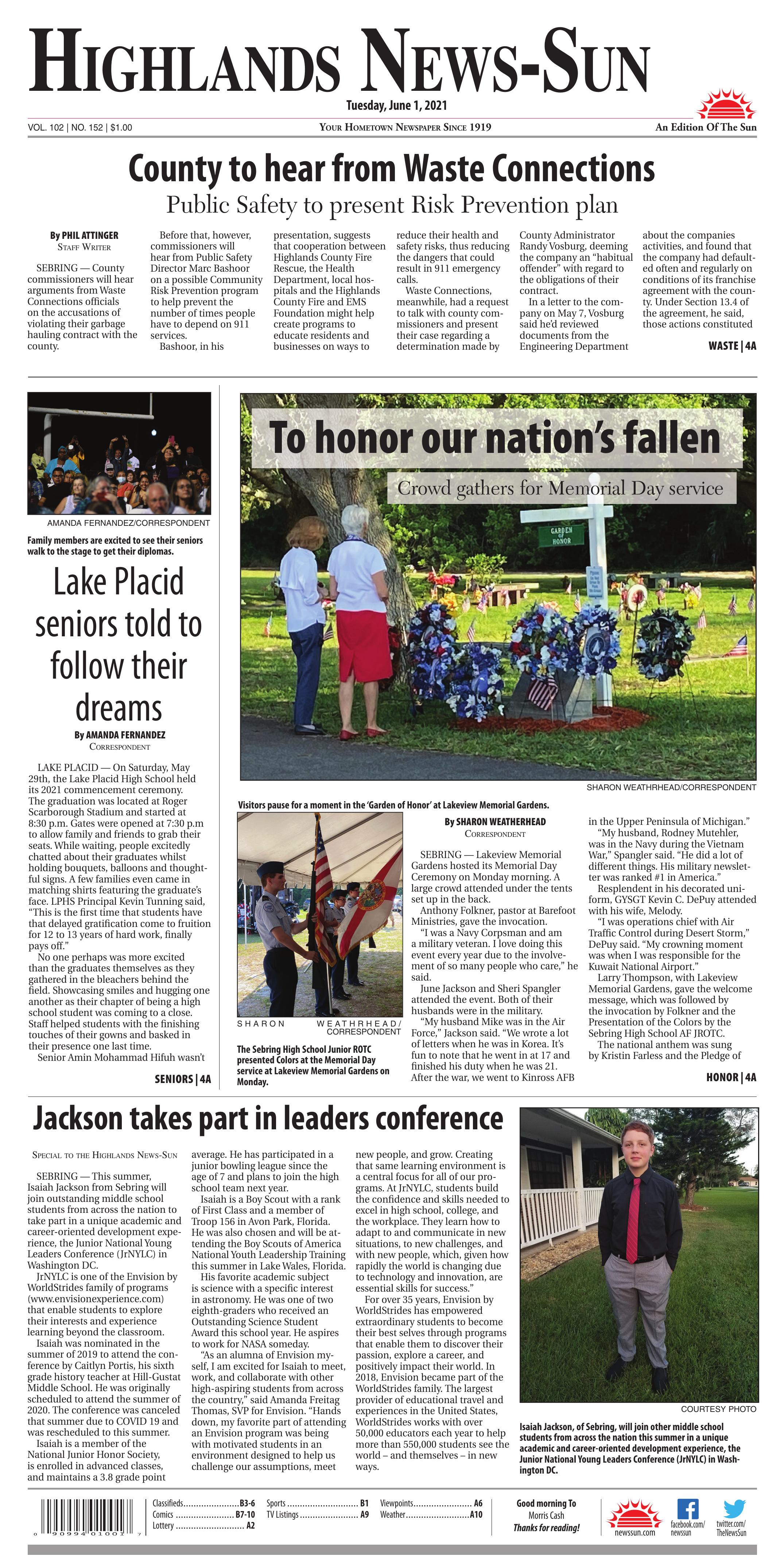 SEBRING — County commissioners will hear arguments from Waste Connections officials on the accusations of violating their garbage hauling contract with the county.

Before that, however, commissioners will hear from Public Safety Director Marc Bashoor on a possible Community Risk Prevention program to help prevent the number of times people have to depend on 911 services.

Bashoor, in his presentation, suggests that cooperation between Highlands County Fire Rescue, the Health Department, local hospitals and the Highlands County Fire and EMS Foundation might help create programs to educate residents and businesses on ways to reduce their health and safety risks, thus reducing the dangers that could result in 911 emergency calls.

Waste Connections, meanwhile, had a request to talk with county commissioners and present their case regarding a determination made by County Administrator Randy Vosburg, deeming the company an “habitual offender” with regard to the obligations of their contract.

In a letter to the company on May 7, Vosburg said he’d reviewed documents from the Engineering Department about the companies activities, and found that the company had defaulted often and regularly on conditions of its franchise agreement with the county. Under Section 13.4 of the agreement, he said, those actions constituted a “condition of irredeemable default.”

In a response letter, Waste Connections’ attorney Grant J. Smith strongly disagreed with the declaration, stating that the county had no history of default on which to base the decision, and if there had, that the county should have served the company with notices of default, as required under Sections 12 and 13.2(g) of the contract.

He said company officials deserve to know what specific grievances the county has, and are prepared to discuss these issues, but have no paper-trail of violations to follow.

Another item on the agenda will have commissioners consider passing an amendment to code enforcement ordinances for the Sun ‘N Lake Special Improvement District. The District’s Board of Supervisors voted to have changes made, but must have the county finalize those changes, under Florida law.

Commissioners will also look at the health insurance premium structure for county employees, as well as the county’s annual contribution to the plan; a resolution regarding county-maintained right of ways; a property exchange agreement between the county and AdventHealth Lake Placid for the future fire and EMS station to go next to the hospital, and a request to spend $19,500 to apply for federal grants.

The playing of “Taps.”

Visitors pause for a moment in the ‘Garden of Honor’ at Lakeview Memorial Gardens.

The VFW 4300 played “Taps” at the Memorial Day service at Lakeview Memorial Gardens on Monday.

The line for hot dogs was a lengthy one.

SEBRING — Lakeview Memorial Gardens hosted its Memorial Day Ceremony on Monday morning. A large crowd attended under the tents set up in the back.

“I was a Navy Corpsman and am a military veteran. I love doing this event every year due to the involvement of so many people who care,” he said.

June Jackson and Sheri Spangler attended the event. Both of their husbands were in the military.

“My husband Mike was in the Air Force,” Jackson said. “We wrote a lot of letters when he was in Korea. It’s fun to note that he went in at 17 and finished his duty when he was 21. After the war, we went to Kinross AFB in the Upper Peninsula of Michigan.”

“My husband, Rodney Mutehler, was in the Navy during the Vietnam War,” Spangler said. “He did a lot of different things. His military newsletter was ranked #1 in America.”

“I was operations chief with Air Traffic Control during Desert Storm,” DePuy said. “My crowning moment was when I was responsible for the Kuwait National Airport.”

Larry Thompson, with Lakeview Memorial Gardens, gave the welcome message, which was followed by the invocation by Folkner and the Presentation of the Colors by the Sebring High School AF JROTC.

The national anthem was sung by Kristin Farless and the Pledge of Allegiance followed.

“The Jr. ROTC placed a flag on over 800 graves yesterday. They marched to every grave and saluted in full uniform,” Thompson said of the Junior ROTC cadets.

The featured speaker, Mike Borders, is an Army veteran, and well-known in the Highlands County military community.

“Some people are not sure of the difference between Veterans Day and Memorial Day,” Borders said. “Veterans Day is Nov. 11th, which was the last day of World War I. This day honors all veterans.

“Memorial Day is when we honor our nation’s fallen – those who paid the ultimate price for our freedom. Today, those freedoms are threatened by those within as well as those outside.”

Borders read the famous ‘In Flanders Field’ poem. He also reminded everyone that Memorial Day was not a national holiday until 1971. Previously, it was called Decoration Day as people decorated the graves of the soldiers.

The Highlands County Sheriff’s Office Honor Guard demonstrated the 13 folds of the flag while Thompson explained what each fold meant.

After the ceremony, people visited with friends and then got in line for hot dogs, chips and beverages.

Rep. Kaylee Tuck, with the Florida House of Representatives, attended the event.

“This is incredible. I’m so happy to have been part of it. It’s so neat to be able to honor our fallen soldiers in this way,” Tuck said.

Isaiah Jackson, of Sebring, will join other middle school students from across the nation this summer in a unique academic and career-oriented development experience, the Junior National Young Leaders Conference (JrNYLC) in Washington DC.

SEBRING — This summer, Isaiah Jackson from Sebring will join outstanding middle school students from across the nation to take part in a unique academic and career-oriented development experience, the Junior National Young Leaders Conference (JrNYLC) in Washington DC.

JrNYLC is one of the Envision by WorldStrides family of programs (www.envisionexperience.com) that enable students to explore their interests and experience learning beyond the classroom.

Isaiah is a member of the National Junior Honor Society, is enrolled in advanced classes, and maintains a 3.8 grade point average. He has participated in a junior bowling league since the age of 7 and plans to join the high school team next year.

Isaiah is a Boy Scout with a rank of First Class and a member of Troop 156 in Avon Park, Florida. He was also chosen and will be attending the Boy Scouts of America National Youth Leadership Training this summer in Lake Wales, Florida.

His favorite academic subject is science with a specific interest in astronomy. He was one of two eighth-graders who received an Outstanding Science Student Award this school year. He aspires to work for NASA someday.

“As an alumna of Envision myself, I am excited for Isaiah to meet, work, and collaborate with other high-aspiring students from across the country,” said Amanda Freitag Thomas, SVP for Envision. “Hands down, my favorite part of attending an Envision program was being with motivated students in an environment designed to help us challenge our assumptions, meet new people, and grow. Creating that same learning environment is a central focus for all of our programs. At JrNYLC, students build the confidence and skills needed to excel in high school, college, and the workplace. They learn how to adapt to and communicate in new situations, to new challenges, and with new people, which, given how rapidly the world is changing due to technology and innovation, are essential skills for success.”

For over 35 years, Envision by WorldStrides has empowered extraordinary students to become their best selves through programs that enable them to discover their passion, explore a career, and positively impact their world. In 2018, Envision became part of the WorldStrides family. The largest provider of educational travel and experiences in the United States, WorldStrides works with over 50,000 educators each year to help more than 550,000 students see the world – and themselves – in new ways.

Family members are excited to see their seniors walk to the stage to get their diplomas.

Lake Placid High School Principal Kevin Tunning and one of the graduating seniors stop and pose for pictures after the exchange of the diploma.

LAKE PLACID — On Saturday, May 29th, the Lake Placid High School held its 2021 commencement ceremony. The graduation was located at Roger Scarborough Stadium and started at 8:30 p.m. Gates were opened at 7:30 p.m to allow family and friends to grab their seats. While waiting, people excitedly chatted about their graduates whilst holding bouquets, balloons and thoughtful signs. A few families even came in matching shirts featuring the graduate’s face. LPHS Principal Kevin Tunning said, “This is the first time that students have that delayed gratification come to fruition for 12 to 13 years of hard work, finally pays off.”

No one perhaps was more excited than the graduates themselves as they gathered in the bleachers behind the field. Showcasing smiles and hugging one another as their chapter of being a high school student was coming to a close. Staff helped students with the finishing touches of their gowns and basked in their presence one last time.

Senior Amin Mohammad Hifuh wasn’t real sad to close this chapter of his life. “Oh, not really. I am proud of every student that’s walking tonight. How they all overcame obstacles in their life and now they’re walking, we’re all walking”.

Other families were a bit scared seeing their loved one about to set off to new adventures. “I’m overwhelmed with joy, happy and scared at the same time” said Lacino Brown, mother of senior Ta’ Lazarus Kinsey.

At 8:30 p.m., graduates walked to “Pomp and Circumstance” and sat in front of their family and friends. The LPHS JROTC opened the ceremony with the presentation of colors, followed by Seth Landon Smoak leading everyone into invocation. Giving the first of several speeches was Tunning, who started as an LPHS administrator at the same time the seniors were starting their freshman year.

“So we also hold a little greater sense of pride seeing you walk across the stage tonight” he said. He went on to thank the families of the students and the Lake Placid schools faculty for having helped students reach this joyous milestone. For Tunning, graduation day is one of his favorite days due to how hard the students work to get there and to see the sense of accomplishment once they’ve made it.

Afterwards, he invited Patricia Taylor for the class president speech. She spoke about the honor it was to speak before her peers and of all the precious memories they have shared. Awards were then presented: Dr. Brenda Longshore (superintendent of schools) presented The Bailey Medal to Lauren Michael Chapman and Amin Mohammad Hifuh. Followed by the Dr. Fitzgerald Citizenship Award presented by school board member and LPHS alumnus Bill Brantley. The 2021 recipients were Brianna Nicole Pratt and Peyton Killy Ming. Then the Gwen Sanders-Hill Scholastic Achievement Award was presented by Chairperson Jan Shoop; the recipients were Madyson Bo D’Espires and Rorie Allison Bean.

Bo D’Espires also serves as class valedictorian and conveyed to her class the importance of following their dreams instead of falling to society’s idea of what they’re supposed to be. She ended her students address with, “Follow your dreams and make today a great day.”