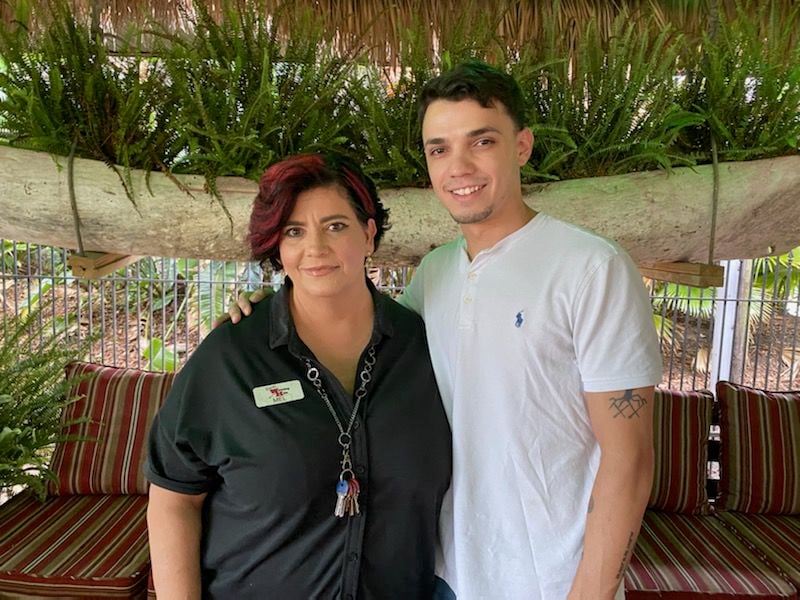 Melody Test is a manager at Cowpoke’s Watering Hole where she works with Jorge Gomez. She poses proudly with him and calls him a hero for saving someone’s life with the Heimlich maneuver. 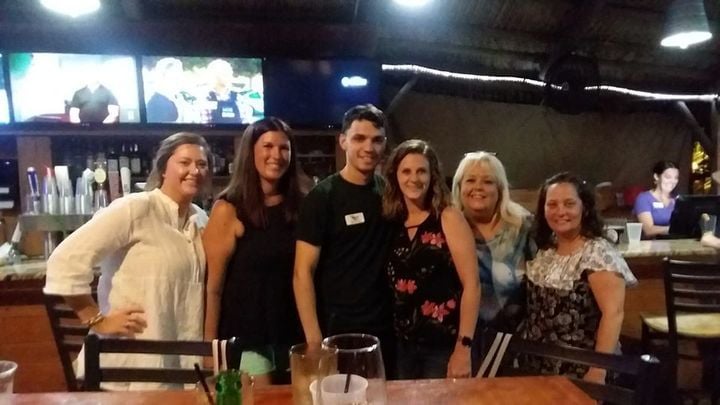 This group of women showed their appreciation to Jorge Gomez with a gift card after they watched him save a man’s life in Cowpoke’s Watering Hole.

Melody Test is a manager at Cowpoke’s Watering Hole where she works with Jorge Gomez. She poses proudly with him and calls him a hero for saving someone’s life with the Heimlich maneuver.

This group of women showed their appreciation to Jorge Gomez with a gift card after they watched him save a man’s life in Cowpoke’s Watering Hole.

SEBRING – Jorge Gomez, 24, of Lake Placid is considered a hero to the staff and many patrons at Cowpoke’s Watering Hole restaurant. Gomez, who is studying to become a RN, leapt into action on June 20 to save the life of a complete stranger.

Melody Test, Jorge’s manager, did not see the event but excited patrons of the restaurant told her their accounts of Jorge performing the Heimlich maneuver to save the customer’s life. She said a group of women were so impressed with his life-saving skills, they bought him a $50 gift and were extremely generous with their tips. The gentleman he saved, who wished to remain anonymous, left a $200 tip and wrote emails to Gomez’s professor at Keiser University.

“So many people are afraid to engage,” Test said. “The guy was about 6-foot-3, quite a bit taller than Jorge. He had a piece of meat lodged so bad that Jorge had to keep doing it (Heimlich maneuver). Jorge is an inspiration.”

Gomez said he was working as a server in the tiki hut area on what he called a regular night. He waited on a couple celebrating their anniversary with a nice meal and wine about 7 p.m. He estimated them to be in their 30s.

“I was doing my rounds and the man looked at me,” Gomez said. “I asked if he was choking. He nodded ‘yes.’ I didn’t hesitate; I just broke it down. I pulled him in for the Heimlich. It took about 12-15 thrusts for the meat to come out. It took maybe 45 seconds. You could see it in his eyes; he thought he was going to die.”

Gomez said afterwards he went home and looked at one of his text books from nursing school to see if he missed any steps. He said he only missed one — back blows to the person choking first.

“I’m not heroic. I am just doing what I’m supposed to do,” Gomez said.

Gomez said any second thoughts he had about becoming an RN vanished quickly. He said he has grown up working in the restaurant and has learned many truths about life. He works part time while attending school in Lakeland. He struggled with college right out of high school but finally figured out his calling.

Linda Vinent and several friends were patrons at the restaurant that night and took a picture with Jorge. Test shared the photo on her personal Facebook page. Vinent was thrilled by Gomez’s actions and commented on Test’s Facebook page.

“Jorge is our hero,” Vinent said. “What he did without hesitation was amazing! Jorge saved this man’s life without a doubt! He told us he is in nursing school while working at Cowpoke’s. This young man is a class act! Highlands County should salute him or present him with something! One of our town’s finest in our opinion!”

Lake Placid Police Department does have CPR courses that include the Heimlich maneuver. Due to COVID-19, classes have not been scheduled. Check the website at lppd.com for upcoming classes.