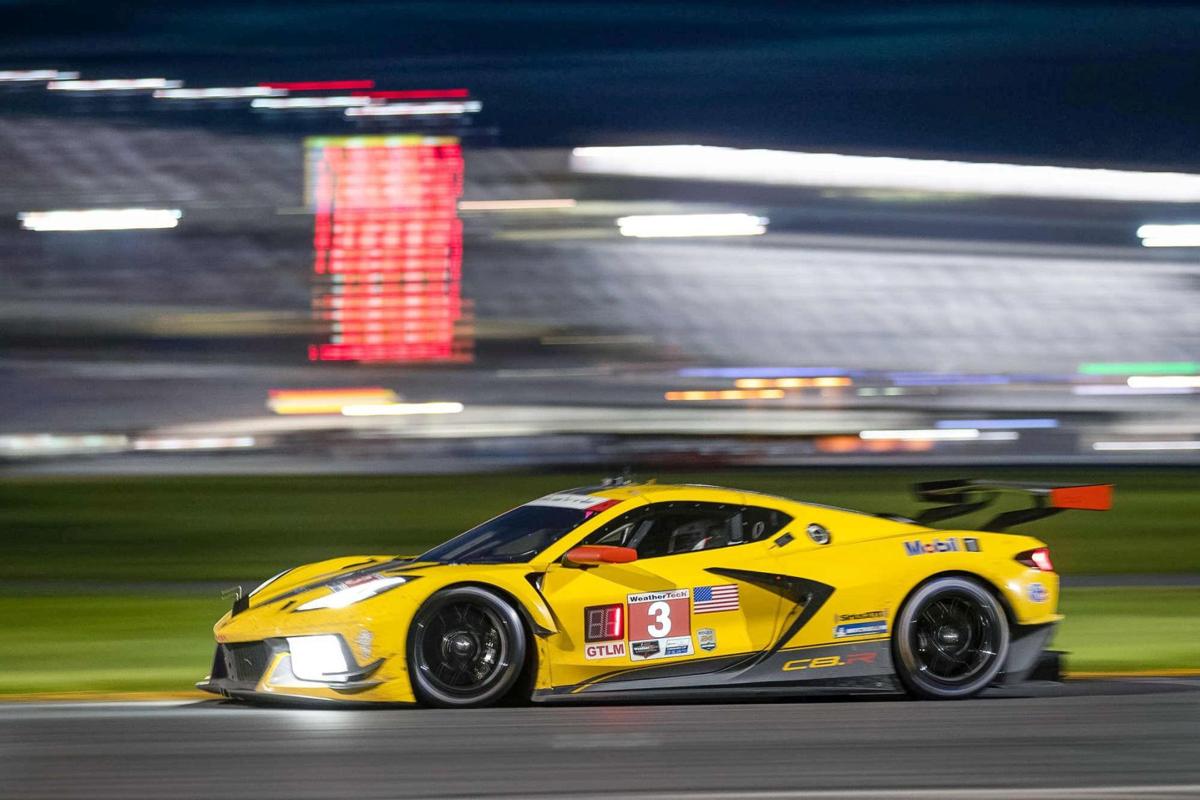 The No. 3 Mobil 1/SiriusXM Chevrolet Corvette C8.R driven by Antonio Garcia and Jordan Taylor races to victory in the GTLM class Saturday, July 4, during the 2020 IMSA WeatherTech SportsCar Championship WeatherTech 240 on the Road Course at the Daytona International Speedway in Daytona Beach. 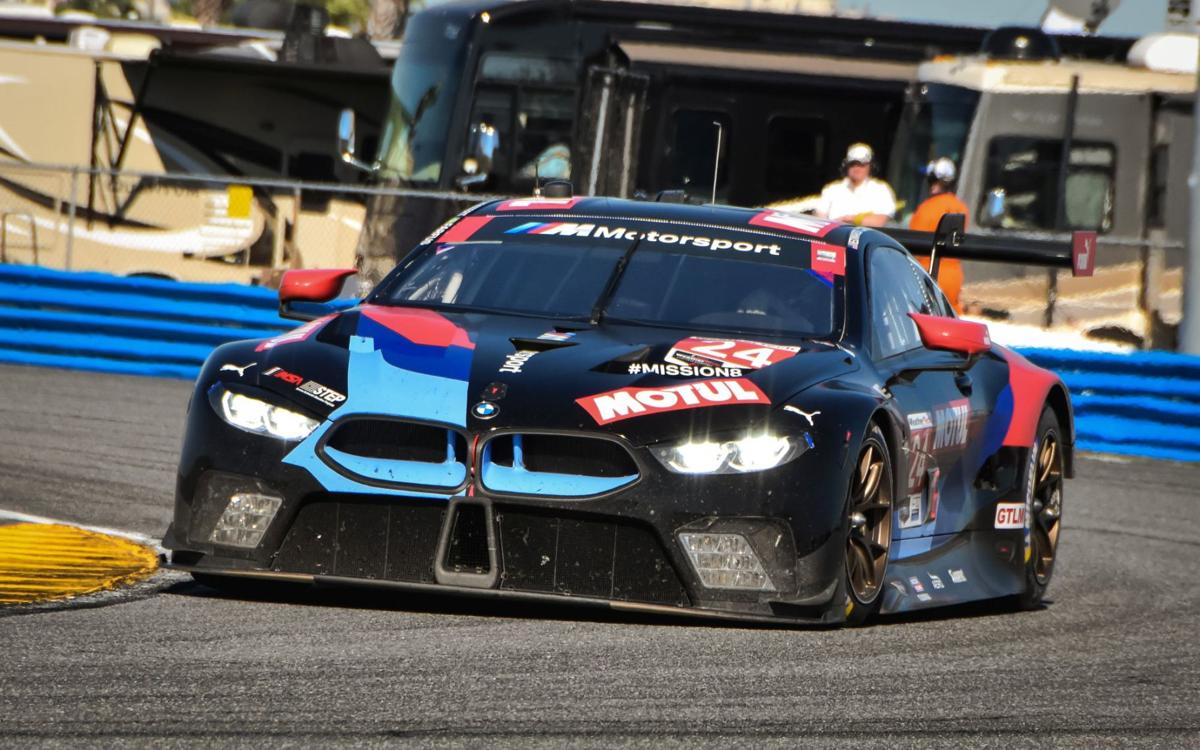 The No. 3 Mobil 1/SiriusXM Chevrolet Corvette C8.R driven by Antonio Garcia and Jordan Taylor races to victory in the GTLM class Saturday, July 4, during the 2020 IMSA WeatherTech SportsCar Championship WeatherTech 240 on the Road Course at the Daytona International Speedway in Daytona Beach.

Corvette Racing doesn’t have to wait long for its chance at a second straight victory in the IMSA WeatherTech SportsCar Championship. The team returns to the track this weekend at Sebring International Raceway for the Cadillac Grand Prix in search of another win for the mid-engine Chevrolet Corvette C8.R.

Both Corvettes will be on the GT Le Mans (GTLM) grid at Sebring as the IMSA championship embarks on its third race of the season and second following a weeks-long layoff due to the COVID-19 pandemic. Unlike the team’s previous 21 visits to the 3.7-mile, 17-turn road course, Saturday’s affair is a two-hour, 40-minute sprint race.

It’s the same format that saw Antonio Garcia and Jordan Taylor claim a class victory in the IMSA WeatherTech 240 at Daytona on July 4. The Independence Day result gave Corvette Racing its 100th win in IMSA as well as the first for the new Corvette. The No. 3 Mobil 1/SiriusXM Corvette C8.R won by 1.977 seconds in the car’s third race, and Garcia set the fastest GTLM lap of the race.

The sister Corvette – the No. 4 Mobil 1/SiriusXM C8.R – scored pole position with Oliver Gavin at the wheel. He and teammate Tommy Milner led the race on two occasions and went on to finish fifth in the race. Like Daytona, Sebring is a track that Corvette Racing has a significant amount of testing data available, having completed a multi-day test there earlier this year and also early in the C8.R’s initial development period.

BMW Team RLL will be at Sebring International Raceway for today’s Round Three of the 2020 IMSA WeatherTech SportsCar Championship. The two-hour-and-forty-minute Cadillac Grand Prix of Sebring is the second of two sprint races scheduled to replace events postponed or cancelled during the Covid-19 pandemic.

“We had a very successful test at Sebring in February so I am confident we will have a good package this weekend,” said Connor De Phillippi, driver No. 25 BMW M8 GTE. “We did not get the result we wanted two weeks ago at Daytona despite our pace so we will have to be very smart and a bit lucky.”

“The Sebring circuit is always a demanding test and I believe the M8 has proven to be quite reliable,” commented Bobby Rahal, Team Principal. “We have shown we have the pace and will give it our best shot.”

In the GTD class, Bill Auberlen and Robby Foley will team up in the No. 96 Turner Motorsport BMW M6 GT3. Auberlen tuned up for the Sebring event last weekend at VIRginia International Raceway, in Alton, Virginia with three races at the GT World Challenge America weekend. Auberlen and co-driver James Walker Jr. raced the No. 82 BimmerWorld BMW M4 GT4 to two wins and one second place finish in the GT4 Sprint X Pro-Am class.

The two-hour-and-forty-minute race will take the green flag at 5:35 p.m. and be broadcast live on NBCSN beginning at 5:30 p.m.

“It’s great to stay in the rhythm of racing with such a quick turnaround from round two at Daytona,” Edwards said. “Round three at Sebring will certainly be another challenge with limited practice and hot Florida temperatures. We’ll have to race smart to get back to a podium finish.”

After a successful restart to the IMSA WeatherTech SportsCar Championship, Porsche is eager to take the lead of the manufacturers’ classification at round three in Sebring today.

After yielding two podium results in the GTLM class from the first two races held at America’s motor racing stronghold, Daytona, the factory squad of the sports car manufacturer is just one point off the lead with the Porsche 911 RSR. At the second race in Florida within two weeks, two works-run RSR from Weissach will be entered.

Works drivers Earl Bamber (New Zealand) and Laurens Vanthoor (Belgium) share driving duties in the No. 912 Porsche 911 RSR. The reigning GTLM-class champions have scored second place at the first two rounds of the season in Daytona and currently lead the drivers’ championship. Briton Nick Tandy and Frédéric Makowiecki from France are keen to claim their first win of the season with the No. 911 sister car. The pair concluded the 24-hour race at the end of January and the race over 2:40 hours in Daytona on 4 July in third place. In the manufacturers’ classification, Porsche currently ranks third, just one point behind the joint leaders BMW and Corvette. At round three in Sebring, the North American factory squad now aims to bring home the first IMSA win with the new Porsche 911 RSR.

“We claimed podium spots at the first two races in Daytona and by now we’re the only manufacturer to finish on the podium at all races,” said Director Factory Motorsport Pascal Zurlinden. “The 2020 season has started very well. Now there’s just one thing missing: We want to achieve the first win in the USA for the 2019-spec Porsche 911 RSR. Our factory squad in North America did an exceptional job under difficult conditions recently. I’m sure that our team will put in another strong performance at Sebring. I’m particularly pleased that the IMSA management and the local authorities have managed to make real motor racing possible again with a well thought-out health-protection concept. A huge thank you to all involved.”