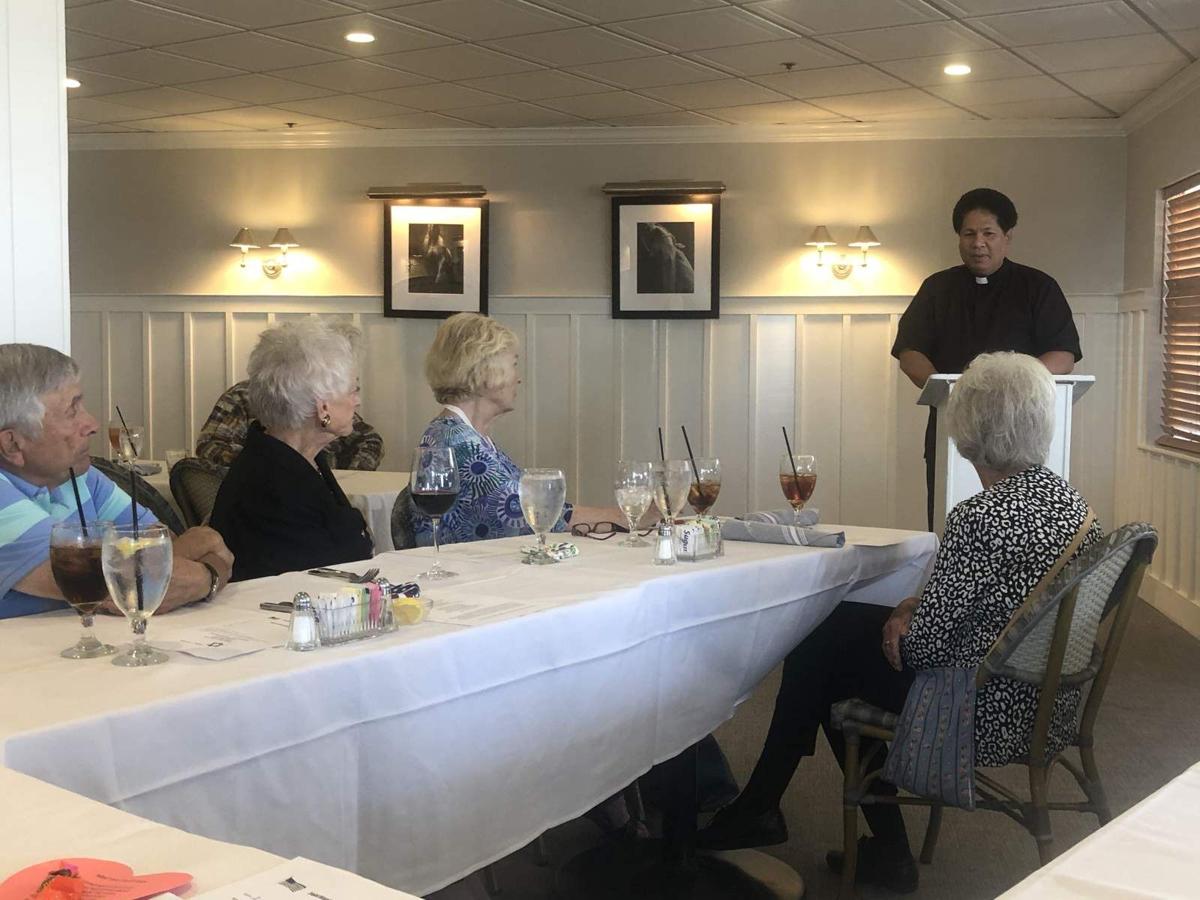 Father Ronnie Sison had a strong message off how to find unity to the guests at last week’s Heartland American-Israeli Initiative luncheon. 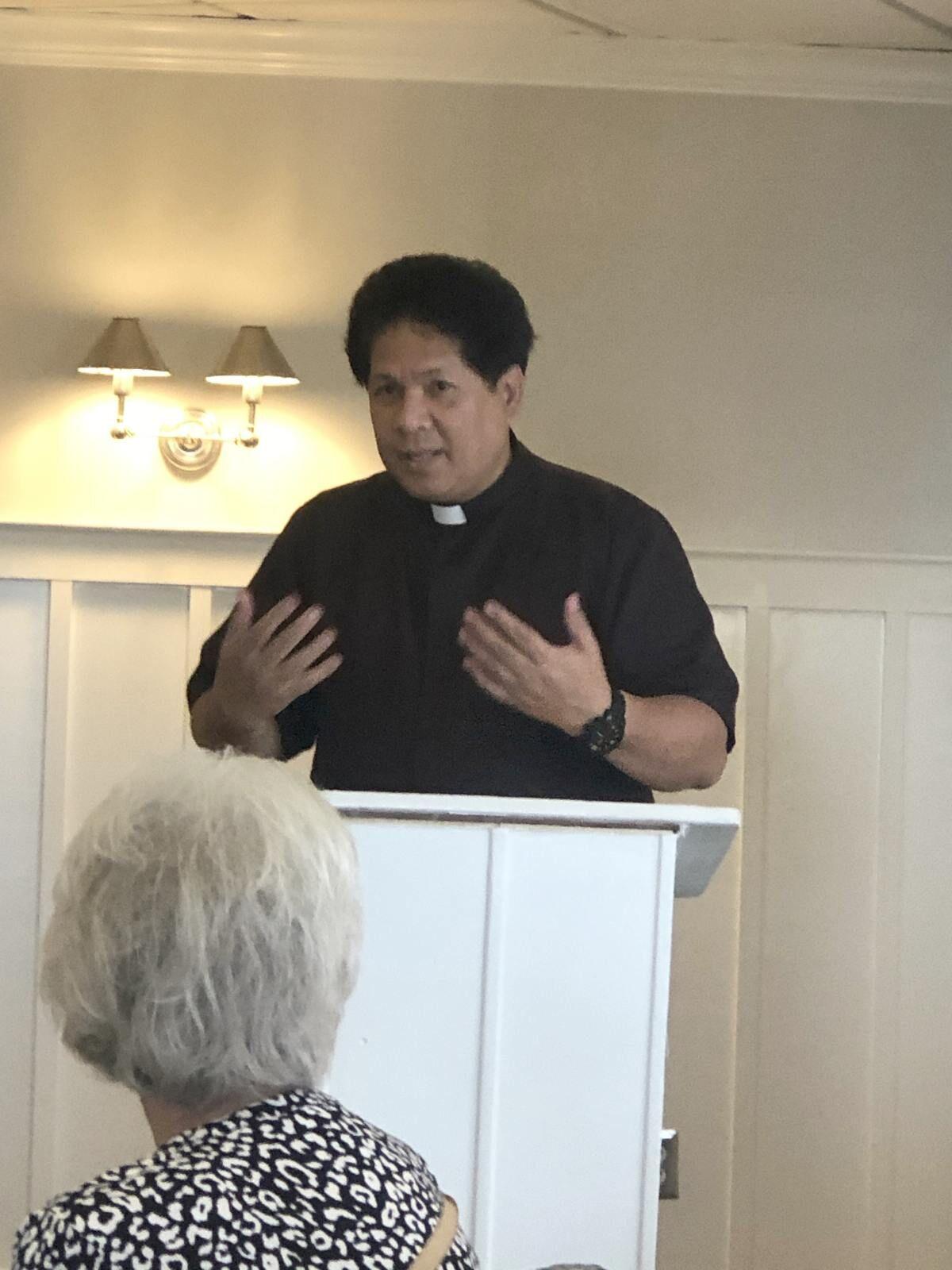 Father Ronnie Sison asked the attendees at the HAAI luncheon, “How can we put God back into the consciousness of our country?”

Father Ronnie Sison had a strong message off how to find unity to the guests at last week’s Heartland American-Israeli Initiative luncheon.

Father Ronnie Sison asked the attendees at the HAAI luncheon, “How can we put God back into the consciousness of our country?”

Initiative President Justine Devlin began the first meeting of the year of the HAII (Heartland American-Israel Initiative) by reading the group’s mission “to support and promote vigorously the long-standing partnership between the United States and Israel by heightening awareness at the grass roots level among government representatives, local institutions and the general public.”

Guest speaker Father Ronnie Sison was asked to offer a prayer. He read a prayer of exceptional goodness scrawled on a piece of wrapping paper found in the Nazi Concentration Camp at Ravensbruck, Germany. It was written by a child.

“Lord, remember not only the men and women of good will but all those of ill-will. Do not only remember the suffering they have subjected us to. Remember the fruits we brought forth thanks to this suffering — our comradeship, our loyalty, our humility, our courage and generosity, the greatness of heart that all of this inspired. And when they come to judgment, let all these fruits we have borne be their reward and their forgiveness.”

President Deviln then asked that people present and the public consider joining the Initiative. The cost is $25 per year. To join send a check to Heartland America-Israeli Initiative c/o Jamie Bateman, 13 Eat Main St. Avon Park, Florida, 33825. It will support the wonderful work the Initiative does by sponsoring monthly presentations, and tours to various Holocaust Museums and Memorials as well as educate the general public.

Sison, Administrator of Our Lady of Grace Catholic Church in Avon Park, earned his Masters Degree and Licentiate in Missiology from the Pontifical Gregorian University in Rome, Italy. His talk was entitled “Lessons from Catholic-Jewish Relations, a Model for Healing Divisions.”

Sison told the group that for 15 centuries on Good Friday in Roman Catholic Churches there was a long prayer recited that basically prayed for “unfaithful Jews.” It obviously created a most negative impression of Jewish people.

It took a pope, John XXIII in 1958 to stop that prayer. However a practice continued as it appeared in the 1962 Catholic Missal (prayer book) encouraging Catholics to pray for the conversion of Jews that they may find Jesus.

The 1970 Missal took a complexly different perspective. During the Pontificate of Pope Paul VI, the Church began to emphasize that the Jews were the first to hear the Word of God. They were the first people that God made His own.

Father Sison used that change as a model for healing divisions today. He said, “With the tensions in America today how can we find inner peace? How can we set God’s view in motion?” How can we become brothers and sisters? He said that we must learn to dialogue and that means meeting others first on a personal level, not starting with differences.

He talked of a family of one faith being the only ones in an entire community not of another faith. The majority wanted the family to move out of the neighborhood, but as they slowly began to know each other on a personal basis, they were welcomed as loving friends and began caring for each other. That changed everything.

“The concentration camps during the Holocaust were the consequences of God’s absence,” commented Sison. Today it seems God is being driven out and becoming absent in our country. He is needed back if we are to survive and that will only happen if we meet each other on a personal level.

Sison closed his presentation asking the attendees to pray with him the prayer of St. Francis which if prayed often can lead to deep care for others no matter their beliefs, race, or creeds.

Lord, make me an instrument of your peace:

Were there is hatred, let me sow love;

Where there is injury, pardon;

Where there is doubt, faith;

Where there is despair, hope;

Where there is darkness, light;

Where there is sadness, joy.

O divine Master, grant that I may no so much seek

To be consoled as to console,

To be understood as to understand,

To be loved as to love.

For it is in giving that we receive,

It is in pardoning that we are pardoned,

And it is in dying that we are born to eternal life.

A member of the audience commented about a newly released book telling the story of children who were tortured in concentration camps during the Holocaust or were hidden for years by loving people. Written in their late years the Holocaust survivors wanted to speak loudly to today’s youth that it “NEVER happens again. The book is entitled “We Must Not Forget: Stories of Survival and Resistance” by Deborah Hopkinson.

The next meeting of HAII (Heartland American-Israeli Initiative) will be held at noon, March 10 at Chicane’s in Sebring. A speaker is being arranged. All are welcome.