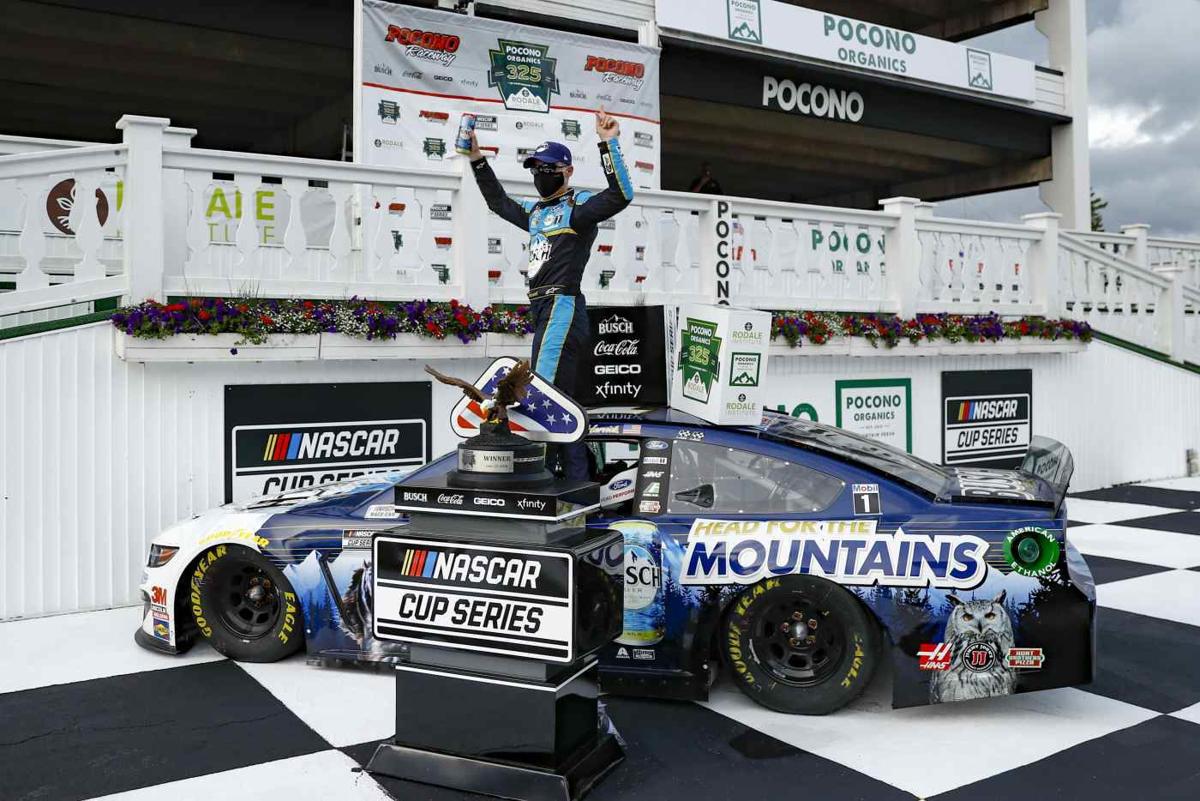 Kevin Harvick celebrates in the winners circle after winning the NASCAR Cup Series auto race at Pocono Raceway on Saturday. 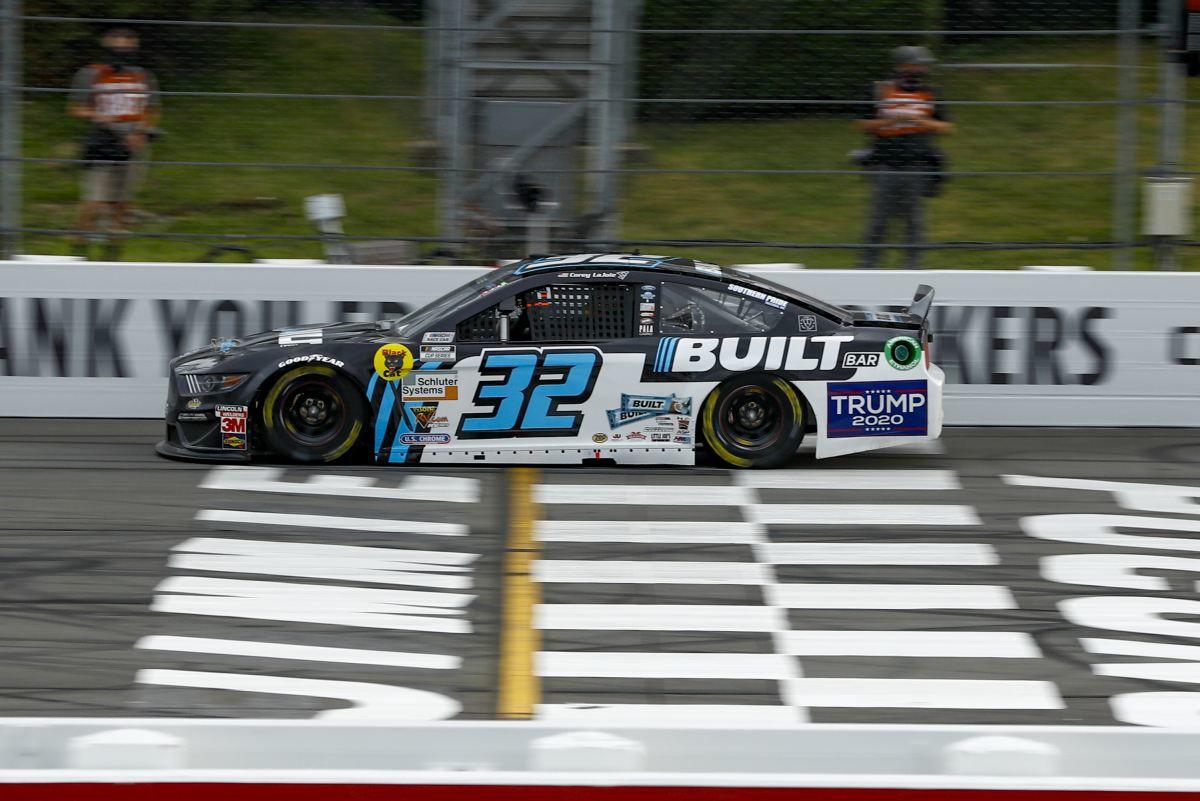 The No. 32 car of Corey LaJoie competes during a NASCAR Cup Series auto race at Pocono Raceway on Saturday.

Kevin Harvick celebrates in the winners circle after winning the NASCAR Cup Series auto race at Pocono Raceway on Saturday.

The No. 32 car of Corey LaJoie competes during a NASCAR Cup Series auto race at Pocono Raceway on Saturday.

LONG POND, Pa. — Kevin Harvick hit pause on that victory swirl of scorched rubber and billows of smoke at Pocono Raceway. He stood on his car alone again in victory lane in front of another race with barren grandstands and the only noise at the track just a few cheers from his Stewart-Haas Racing crew.

“I’m not doing anymore celebrations with nobody out there to celebrate with,” Harvick said. “It doesn’t feel right not having my team in victory lane.”

Harvick snapped an 0-for-38 drought at Pocono, taking the checkered flag Saturday at one of two tracks where victory had eluded him.

Harvick won the first of two NASCAR Cup races in front of no fans this weekend at Pocono and will start 20th on Sunday with the field set by inverting the lead-lap finishers.

The 44-year-old California driver has won at every active track except Kentucky Speedway (nine tries) and the 2014 series champion has three wins overall for SHR this season. He has three career wins at Charlotte Motor Speedway, though he’s lost two races on the roval configuration.

Harvick held off a hard-charging Denny Hamlin, whose efforts were hampered by a late vibration, for his 52nd career Cup victory. He had 12 top-five finishes in his other 38 starts at Pocono.

NASCAR wanted the trip to Pocono to settle one of the most tumultuous weeks in its history after a noose found in Bubba Wallace’s stall last week at Talladega led to a federal investigation. The incident was not ruled a hate crime. NASCAR President Steve Phelps stated “the noose was real,” though it remains unknown who tied it. Wallace, who sparked NASCAR to ban the Confederate flag, has become NASCAR’s advocate for social change and acknowledged his time in the national spotlight left him “wore the hell out.” He finished 22nd in the No. 43 Chevrolet.

The weekend should have been one of the wildest ones in Pocono history. Track officials were optimistic the infield would be jam packed with race fans who wanted to experience four NASCAR races in two days.

“The infield would have been a sight to be seen, one that probably hasn’t been seen on the NASCAR circuit in decades,” Pocono CEO Nick Igdalsky said. “We just couldn’t see it this year. Hopefully, next year we get the opportunity to really show what we can put out here.”

Brad Keselowski, who raced to his lone Pocono win in 2011, tweeted a love letter of sorts tied to his memories of the track that date to his childhood when he tagged along to watch his father, Bob, compete in ARCA races.

“Perhaps that brings out the saddest emotion, not having fans this year at Pocono for our races.,” Keselowski tweeted. “The energy and enthusiasm here from the infield crowd has a realness to it unlike other tracks. In Pocono, the community makes NASCAR feel truly loved, we miss you race fans.”

There was a new look all around the 2½-mile tri-oval in the wake of the coronavirus pandemic.

The track cloaked its leaderboard in advertisements because the pandemic wreaked havoc with plans to upgrade to a modern LED scoring tower. Pocono also had 1,250 fans virtually sign the start/finish line. Staff members hand wrote each name on the start/finish line ahead of race weekend. The 1,250 number matched the scheduled number of miles to be run this weekend. Pocono even sold on its website a race weekend T-shirt with “Quarantined” stamped over the logo.

Talladega Superspeedway was allowed up to 5,000 fans for its race weekend and only 1,000 fans mostly military members and their guests, were allowed two weeks ago at Homestead-Miami Speedway.

SHR had its own challenges when two of its employees who work from the team’s shop in North Carolina tested positive for COVID-19.

“You get out to silence,” Harvick said. “We miss the fans, I miss my team being able to be right in there with us because those are the guys and gals that are making it happen. It’s tough to give an elbow bump or wave at them.”