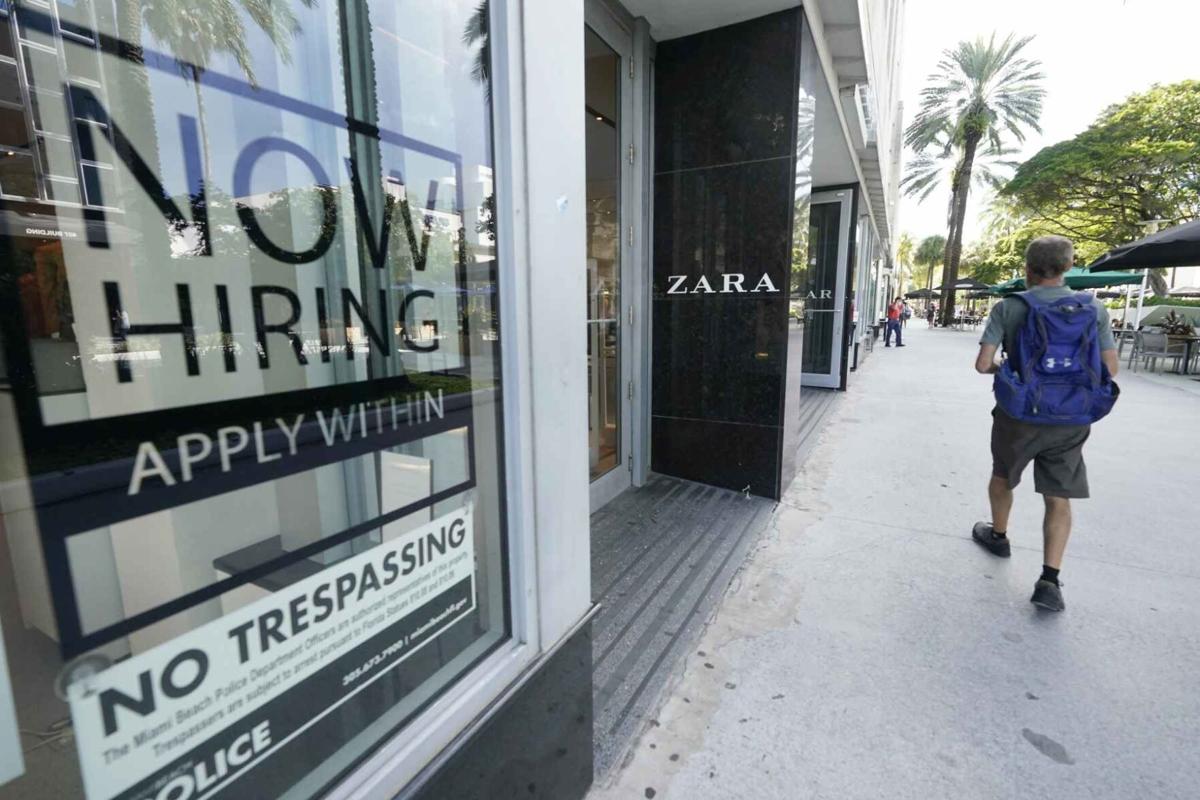 A pedestrian walks past a Zara store with a large “Now Hiring,” sign in the window, Monday, Oct. 12, 2020, along the famed Lincoln Road area in Miami Beach, Fla. The state announced an unemployment rate of 7.6% on Friday. 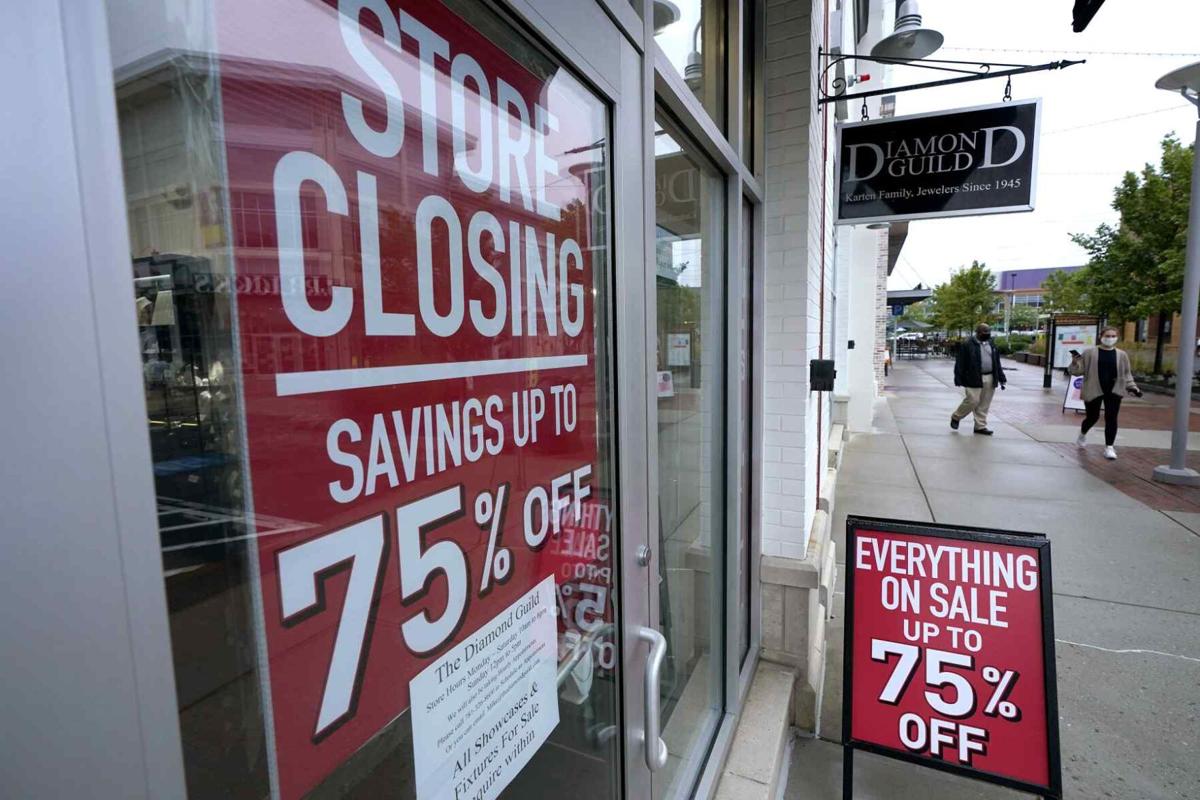 In this Wednesday, Sept. 2, 2020, file photo, passers-by walk past a business storefront with store closing and sale signs. Highlands County saw a modest decline in unemployment, with September’s rate at 6.3%, tied for the 15th-highest county in the state.

A pedestrian walks past a Zara store with a large “Now Hiring,” sign in the window, Monday, Oct. 12, 2020, along the famed Lincoln Road area in Miami Beach, Fla. The state announced an unemployment rate of 7.6% on Friday.

In this Wednesday, Sept. 2, 2020, file photo, passers-by walk past a business storefront with store closing and sale signs. Highlands County saw a modest decline in unemployment, with September’s rate at 6.3%, tied for the 15th-highest county in the state.

Florida’s unemployment rate ticked up in September as the state’s hospitality and tourism industries continue to face long-term struggles amid the coronavirus pandemic.

However, high rates of pandemic-driven job losses are now projected to translate into extra weeks of unemployment benefits for Floridians next year.

“Overall, the labor force number did decline, but what we are seeing is an increase in the number of people who are saying that they are unemployed but looking for work,” Adrienne Johnston, the department’s chief of the Bureau of Labor Market Statistics, told reporters Friday. “So, it could be that people are more encouraged to look for work, so they are counting themselves as unemployed. But I will point out that the labor force did decline over the month.”

One offshoot of the latest numbers is that the state’s average unemployment of 8.7 percent in the third quarter of the year could trigger a boost in the number of weeks — from 12 to 19 — that jobless people can draw assistance.

State law holds the number of weeks at 12 when unemployment is at or below 5 percent, with an additional week added for each 0.5 percentage point above 5 percent in the third quarter of a calendar year. Any change wouldn’t occur until 2021.

Johnston advised the addition of weeks is preliminary and will be finalized after October unemployment rates are posted on Nov. 20.

The Legislature, however, would have to make any change to the amount of money people qualifying for unemployment can receive. That amount is currently up to $275 a week, one of the lowest in the nation.

The September unemployment rate reflects continued struggles for many workers as Gov. Ron DeSantis pushes for businesses to return operations to pre-pandemic levels.

Hard hit have been the leisure and hospitality industries, which were down 234,900 jobs in September from a year earlier. The pandemic cut travel to Florida by more than 60 percent during the year’s second quarter, and the tourism industry has been slow to rebound as Visit Florida expands marketing in areas within driving distance to the state.

Hyatt Regency Orlando, facing restrictions on travel and group meetings, advised the state on Oct. 9 that 315 jobs were to be eliminated Saturday.

“While there are encouraging signs that our economy can begin to reopen in some areas, it has now become clear that the demand for travel, events, and hospitality services will take substantially longer to resume than previously anticipated,” Brian Comes, Hyatt’s area vice president, wrote to the state Department of Economic Opportunity.

In a letter posted Tuesday on the department’s website, Newport Beachside Resort in Sunny Isles Beach announced 100 long-furloughed employees will be let go on Nov. 30.

“We previously provided each affected associate with notice of his/her furloughs, but due to continued state government closures, and the changing effects of the pandemic upon our business, we have had to reassess our initial understanding of the circumstances facing the hotel,” Laura Warner, senior vice president of human resources for Crescent Hotels & Resorts, advised the state on Sept. 24.

On Thursday, hotel chief executives from brands that include Hyatt, Hilton, Marriott and IHG asked President Donald Trump to expand the use of unused dollars from a federal effort known as the Main Street Lending Program to keep the hotel industry from collapse.

“Three out of every 10 hotel employees are now furloughed or laid off, and more than two-thirds of hotels report that they will only be able to last six more months at current projected revenue and occupancy levels absent any further relief,” the chief executives said in a letter.

In September, South Florida, which has had the most COVID-19 cases in the state, eclipsed Central Florida in unemployment rates.

The Miami-Fort Lauderdale-West Palm Beach metropolitan statistical area was at 10.1 percent unemployment for September, just ahead of the Orlando-Kissimmee-Sanford region, which was at 9.8 percent.

“Unemployment in metropolitan Orlando dipped from 11 percent to 9.8 percent in September, marking the first time in months that the tourism-dependent region didn’t top the list for highest unemployment in Florida,” tweeted Sen. Linda Stewart, D-Orlando.

The Crestview-Fort Walton Beach-Destin metropolitan statistical area had the state’s lowest unemployment rate at 4.1 percent, followed by the Gainesville area at 4.3 percent and the Panama City area at 4.6 percent.