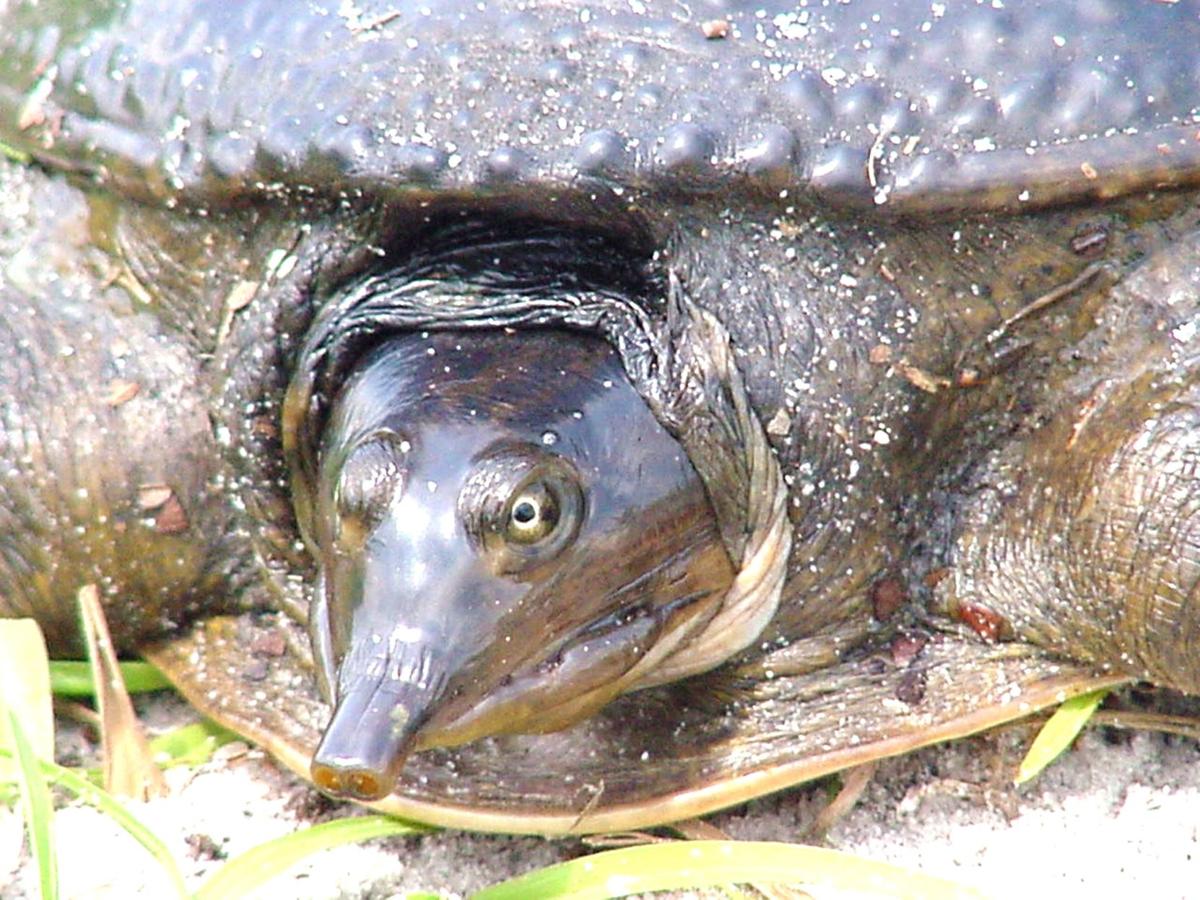 The elongated nose of the Florida softshell turtle allows them to breathe while submerged under the water. 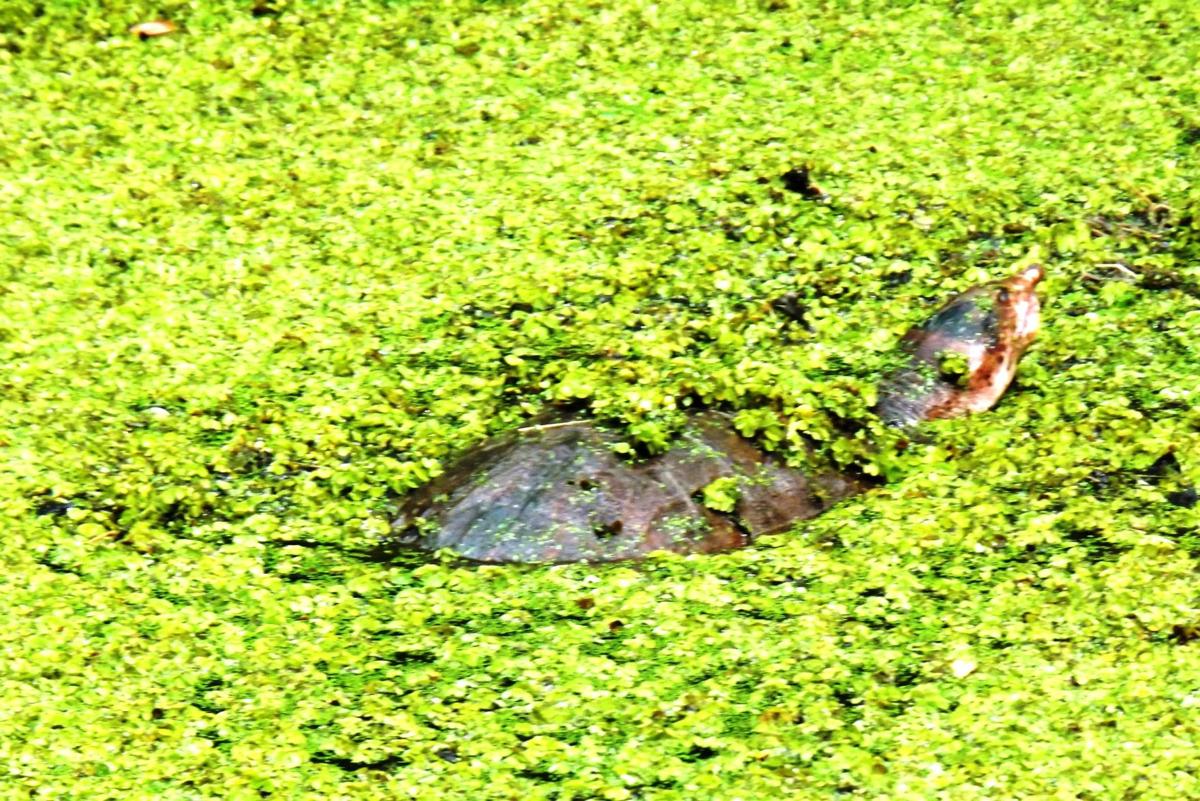 With a thick, long neck and flattened leathery shell, the Florida softshell can grow to nearly two feet in size. 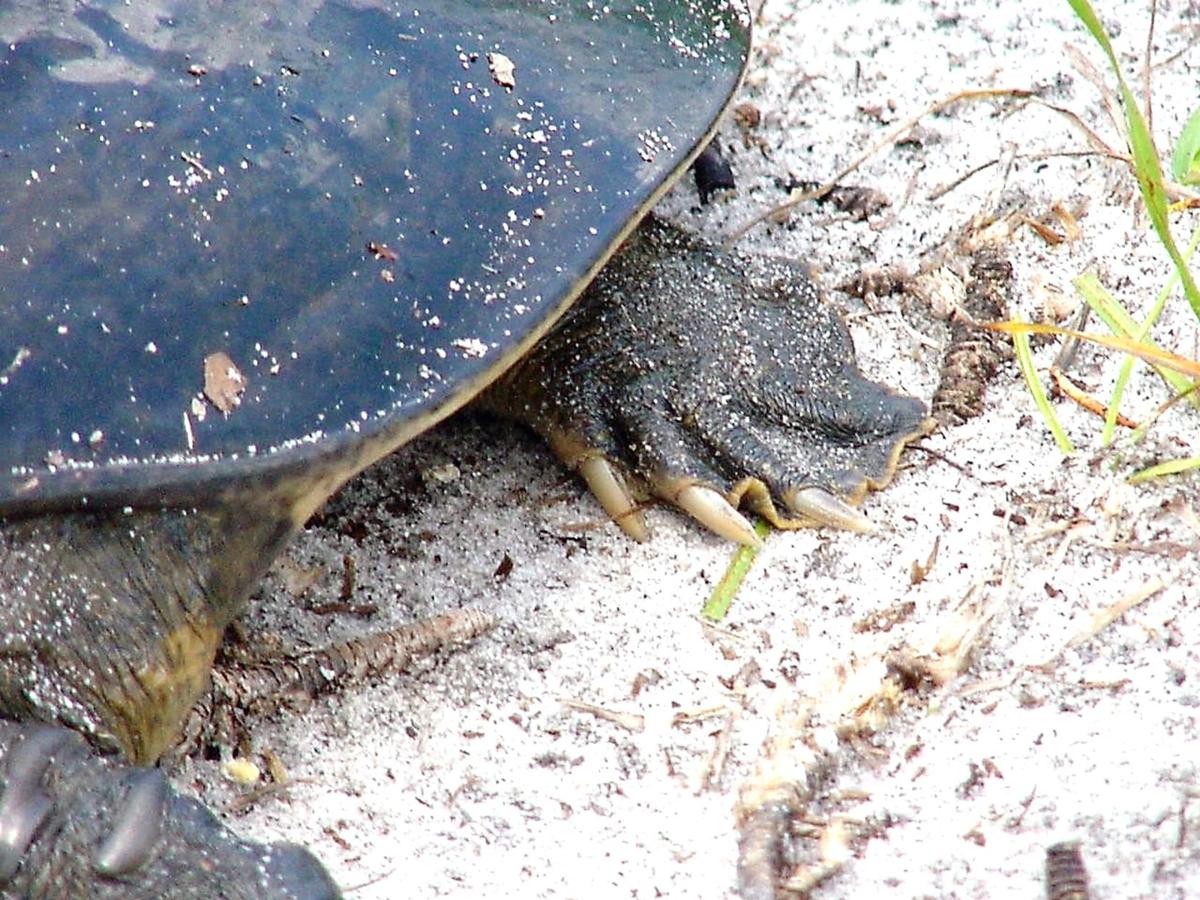 Strong, paddle-like feet end in three long claws which the Florida softshell readily uses to defend itself if handled.

The elongated nose of the Florida softshell turtle allows them to breathe while submerged under the water.

With a thick, long neck and flattened leathery shell, the Florida softshell can grow to nearly two feet in size.

Strong, paddle-like feet end in three long claws which the Florida softshell readily uses to defend itself if handled.

Perhaps you’re out for a walk or dropping a line in a local lake when you see it. The large, flat disk looks a bit like the leather of an old shoe, but there’s a long, thick head extending out beyond the body. Looks like you’ve just spotted a Florida softshell turtle.

Resembling the gray, rubbery hide of a dolphin, the softshell turtle looks a bit like he’s been flattened by a truck. Adults are dull colored, but young are brightly patterned with circles or spots that might remind you of cheetah print. Found throughout Florida, southern Georgia and into southeastern South Carolina, look for them in roadside ditches (which is why they often cross roadways), freshwater lakes or sunning on canal banks.

Nesting from March to July, you may see them scooting about looking for sunny, sandy patches nearby their water source for nesting. The female digs a cavity in the sandy soil and deposits up to 20 eggs or so before covering them back up. Once the nest is completed, she returns to her lake or pond. If no predators disturb the nest, young will hatch in about two months.

Softshell turtles prefer to dine on snails, frogs, and fish. One of the largest freshwater turtles in Florida, males average a foot in length while females can reach nearly two feet in size. Strong swimmers, their webbed feet end with three long claws. Good Samaritans should take note that this species of turtle will readily bite with their sharp beak and scratch if picked up. In fact, their scientific name refers to their ferocious nature when handled.

Their long, thick neck rests folded, but extends a surprising reach. It ends in a face resembling a frog with large eyes and a peculiar elongated snout. A comical appearance, the end of their periscope nose might remind you of a pig’s snout with large nasal passages easily visible. Like a snorkel, the softshell will poke their nostrils up out of the water to breath while floating for long periods. They also will burrow in the soft mud of shallow lakes and poke just the tip of their nose out to breathe.

Their smooth leathery shell is sometimes covered with algae or water plants adding to their otherworldly appearance and renders them quite slippery. It’s best to enjoy this reptile from a distance rather than risk being bitten.

Freshwater turtles are being impacted by a fatal viral disease and the Florida Fish and Wildlife Conservation Commission (FWC) requests any sightings of dead, ill or sickly turtles reported to the FWC Turtle Hotline at 352-339-8597 or via the FWC Reporter app.