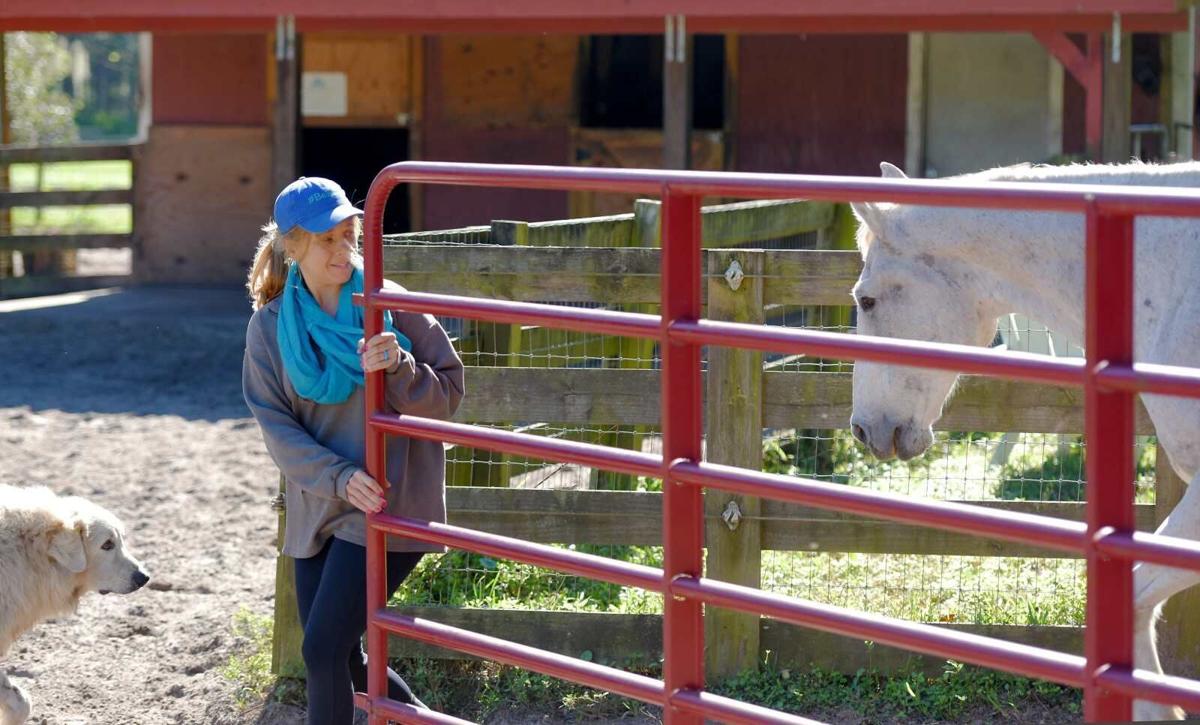 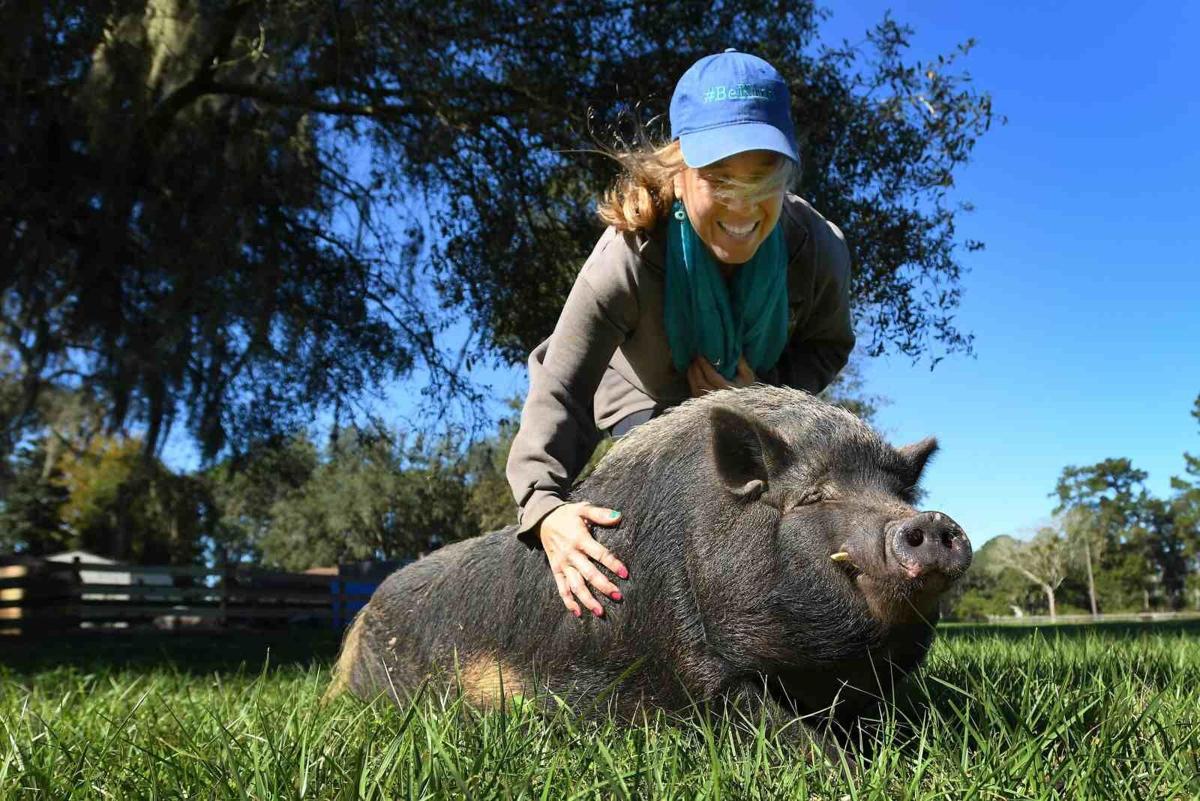 JACKSONVILLE — As a word, a touch or a piece of fruit brings humans and animals together, Jessie Miller gets to watch.

When children and adults visit One EPIC Farm, her nonprofit’s 7-acre sanctuary on Jacksonville’s far north side, they meet animals up close. They meet horses, mules, pigs and other animals they may have never personally encountered before, and some they may have feared.

“Many people who visit the farm have never met a horse … They have never felt the soft fuzzy muzzle of a horse graze their hand as the horse takes a cut-up apple or carrot,” Miller said. “To be able to … see the human-animal connection happen — it brings me to tears at times.”

Miller established the farm in 2019 as an offshoot of her EPIC Outreach humane education nonprofit begun in 2015. After the nonprofit was formed, the second step was always going to be a sanctuary where animals would act as ambassadors.

The outreach program and its certified therapy dogs and guinea pigs have visited schools and summer camps and attended Girl Scout meetings and after-school programs, among other places. The goal of every visit is to teach young people how to care for pets, wildlife and the planet.

Miller established the farm in 2019 as an offshoot of her EPIC Outreach humane education nonprofit begun in 2015. After the nonprofit was formed, the second step was always going to be a sanctuary where animals would act as ambassadors.

The outreach program and its certified therapy dogs and guinea pigs have visited schools and summer camps and attended Girl Scout meetings and after-school programs, among other places. The goal of every visit is to teach young people how to care for pets, wildlife and the planet.

Miller, 43, is a full-time human resources recruiter for Utah-based Best Friends Animal Society, a nationwide animal-welfare organization, and is “pursuing a life of entrepreneurship.” She lives on the farm with husband John White and their five dogs. They have no paid staff and care for the animals themselves but have volunteers to socialize the animals and help with farm projects and at events.

Suzanne Cardiff of St. Augustine, a longtime friend of Miller’s and fellow animal-rescue advocate, is one of those volunteers. Being a part of saving at-risk animals’ lives “means the world,” she said.

“She’s doing a great job out there, really making a difference,” Cardiff said.

Watching children who visit is particularly compelling. Most of them show no fear of the animals or reluctance because of their histories.

“They just walk right up, completely open,” she said.

Ella Trotter, 11, the daughter of another Miller friend, is one of the younger volunteers.

“I’ve always loved animals,” she said. “It’s really fun. You get to interact with the animals and hold some of the smaller animals.”

Now that she’s an experienced volunteer, Ella also gets to feed the animals. The prospect of having horses eat out of her hand was a bit scary at first — wondering if they would mistake her finger for food — then became old hat.

“They just put their mouth on your hand and grab it,” she said.

“They are super sweet and fun to play with,” she said.

Purchased by Miller and her husband in 2019, the farm came with a rescue potbelly pig named Oliver already in residence. Now there are horses, donkeys, pigs, barn cats, guinea pigs, hens and a mule, rabbit, rooster and rescue dog. The farm is close to capacity, she said, but there is still space for a few more small farm animals that are in need of a home.

Most of the current residents came from other rescues or animal-control facilities; the sanctuary rarely accepts animals from people who want to surrender their pets. For various reasons, all but one of the horses are never ridden.

“We tend to take the animals that are less adoptable but do great with people and other animals,” Miller said. “All the animals … get a lot of attention, so an animal that loves to be doted on is a great fit.”

She shares each animal’s story with visitors.

Buck, about 22, is a favorite. He was a racehorse cast off after an injury ended his career and prevented him from being ridden.

Taz, another horse, was to be abandoned in a field if a rescue had not come along. Thumper Bumper, a bunny rabbit, was left in a hutch in someone’s backyard. Pumpkin Patches and Candy Corn, two potbelly pigs, were abandoned at an area animal-control facility.

“Kids and adults who visit are often shocked by how the animals have ended up at the farm sanctuary,” she said. “Hearing that the mule was a stray or that Oliver the pig was left abandoned on the streets … is eye-opening to many.”

Visitors usually have a favorite animal before they leave.

“Sometimes they come with a favorite in mind … then they meet each individual animal and fall in love with their individual personalities,” Miller said.

All donations and fundraiser proceeds go to humane education and the animals’ care, which can be expensive.

The largest expense is feed, hay, veterinary care and a $35 hoof trim every six weeks for the horses, mule and donkeys. Buck alone, who eats the most grain and hay, has a $300 monthly bill.

“So many people rally around the animals getting to a safe place and then they tend to forget that they need to be continually cared for and that takes resources like time and money to feed them and provide the best veterinary care,” Miller said. “They also need to be loved daily. Horses like Buck and Buddy who were once used for riding and then discarded after they were no longer of use find a soft place to land, but need continual support.”

Despite the long hours and constant fundraising, Miller said, the rewards of running an animal sanctuary are worth the effort.

“While it may seem to be a chore for some, my husband and I love it,” she said. “To see where many of these animals came from to where they are today, nothing compares.”

And those human and animal connections she witnesses are priceless.

“I love when people walk away and say thank you for letting them meet the animals,” she said. “I love receiving emails or messages of how meeting the animals made a difference in their lives or brightened their dull day. A seed gets planted for more kindness and compassion … every time someone visits and encounters the animals. Animals are the biggest healers and teachers of all.”

The mailing address for the farm and outreach program is P.O. Box 77479, Jacksonville, FL 32226. To schedule an in-person visit or virtual tour of the farm or inquire about donating food or supplies, email Jessie Miller at jessie@epicanimals.org. To participate in the Farm Friend Pen Pal program, in which youth and adults write to the animals, go to epicoutreach.org/farm-friend-pen-pal. To make a monetary donation or get more information, go to epicoutreach.org/one-epic-farm or facebook.com/epicanimals2015.