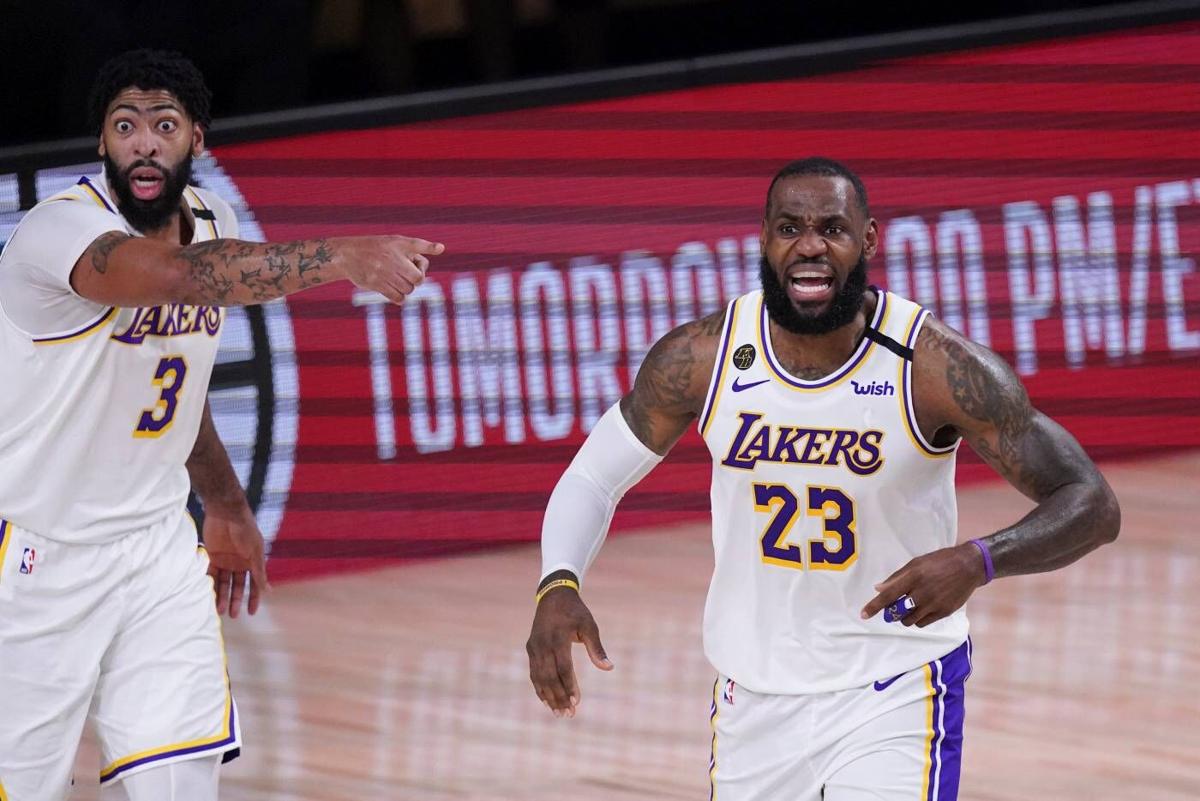 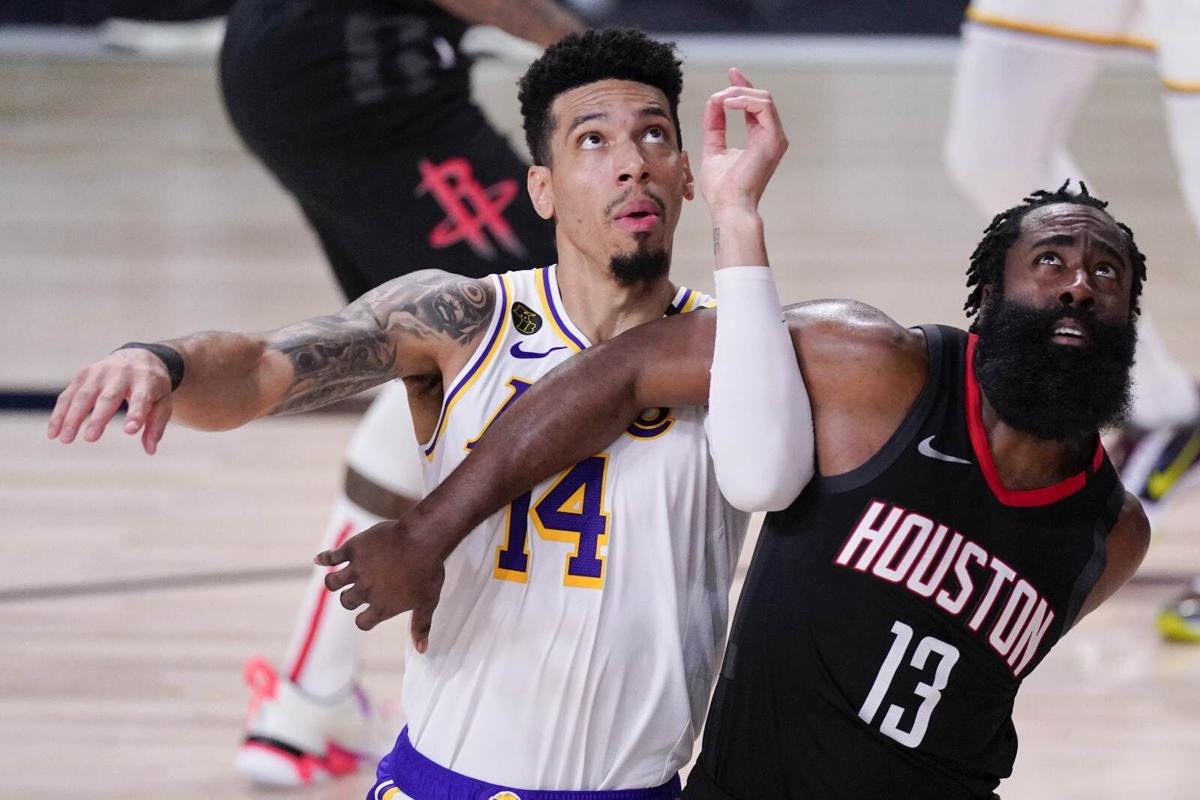 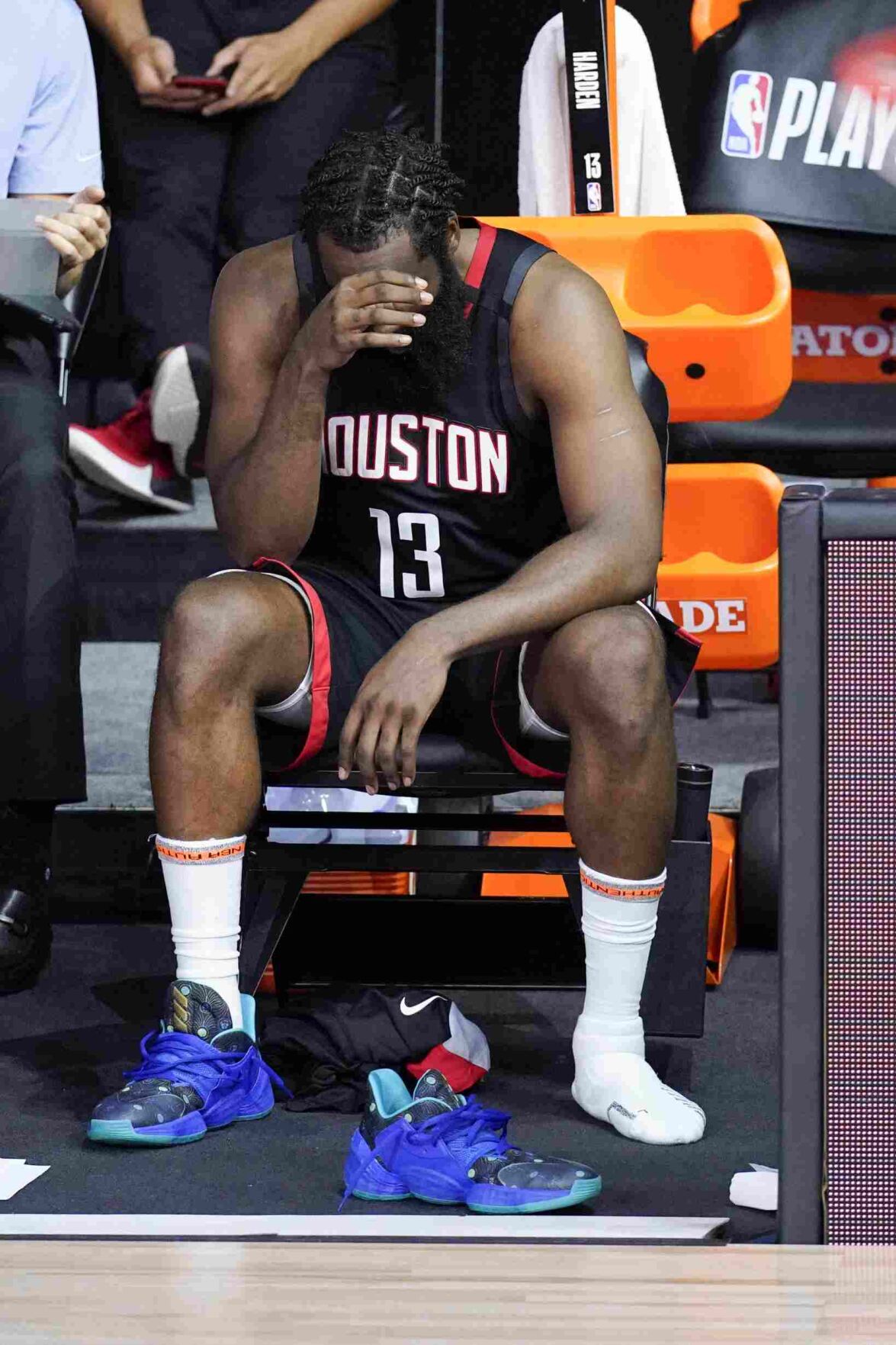 Houston Rockets’ James Harden cover his face in the closing minutes of a loss to the Los Angeles Lakers during the second half of an NBA conference semifinal playoff basketball game Saturday, Sept. 12.

Houston Rockets’ James Harden cover his face in the closing minutes of a loss to the Los Angeles Lakers during the second half of an NBA conference semifinal playoff basketball game Saturday, Sept. 12.

LAKE BUENA VISTA — The Los Angeles Lakers are going to the conference finals for the first time in a decade, ending the longest drought in franchise history.

LeBron James is going there for the first time since 2018. For him, that also qualifies as ending a drought.

James scored 29 points and the Lakers wrapped up their first trip to the Western Conference finals since 2010 by topping the Houston Rockets 119-96 on Saturday night in Game 5 at Walt Disney World.

“It’s the reason I wanted to be a part of this franchise, to take them back to a place that they were accustomed to being — and that’s competing for a championship,” James said. “It’s an honor for me to wear the purple and gold, and for us, we just try to continue the legacy.”

Kyle Kuzma scored 17 points, Markieff Morris had 16, Danny Green added 14 and Anthony Davis finished with 13 for the top-seeded Lakers. They will play either the second-seeded Los Angeles Clippers or third-seeded Denver Nuggets for the West title in a series that won’t begin before Wednesday.

James is going to the conference finals for the 11th time overall — six with Cleveland, four with Miami and now with the Lakers. It’s his ninth time getting to this round in the last 10 seasons; the one miss in that stretch was last season, when his inaugural year with the Lakers fell apart because of injury and the team missed the playoffs.

“Tough season for us,” Harden said. “Obviously, it didn’t end like we wanted it to. Just got to figure it out.”

And now that the offseason is here, the speculation about coach Mike D’Antoni’s future will ramp up. His contract with the Rockets is now complete, the sides couldn’t agree on terms of any extension a year ago, and he’s been mentioned as a candidate for the vacancies in Indiana and Philadelphia.

“We’ve got a great organization, great city, great fans, team’s great,” D’Antoni said. “I mean, everything’s good here. We’ll see what happens, but I couldn’t ask for a better situation. I had four years and hopefully it keeps going. You just never know.”

It was a tough end to a tough week for the Rockets.

Westbrook exchanged heated words with a fan in the family section during the fourth quarter; NBA security asked the man, identified by ESPN as a brother of Lakers guard Rajon Rondo, to leave the game.

Houston won Game 1 of the series and lost the next four. Saturday’s finale came a day after Danuel House — who averaged 11.4 points in nine playoff games this season — was told to leave the bubble. An NBA investigation showed he had an unauthorized guest in his room for several hours earlier this week, and he missed the last three games of the series.

“It affected us,” Harden said, who called the situation disappointing.

The Lakers ran out to a 33-11 lead, though Houston came right back with a 17-2 run to get within seven. The Lakers’ lead was 62-51 at the half after the Rockets turned 13 Los Angeles turnovers into 15 points, the biggest reason why Houston was still in the game to that point.

Houston got within seven on a drive by Westbrook 2:09 into the third, and that was the last real gasp of hope for the Rockets. The Lakers scored the next 15 points, and the lead was 95-69 going into the final quarter.

Lakers: Los Angeles went seven years without a conference-final appearance from 1991 through 1998, the team’s longest drought before this 10-year run. ... The Lakers took the lead in Game 3 on a jumper by James with 10:01 left. They didn’t trail again in the series, going the last 106:01 without facing a deficit.

If this was the end of D’Antoni’s time with the Rockets, he’ll be leaving with some strong numbers. Houston went 217-101 in his four regular seasons with the team — a .682 winning percentage. This season was his “worst,” at .611. He’s gone 28-23 in the playoffs with Houston and was the NBA’s coach of the year in 2016-17, his first season with the Rockets. “Mike has done some unbelievable things here,” said Harden, who said he’d want D’Antoni back.

Less than two hours before game time, James tweeted at Naomi Osaka — who rallied to win the U.S. Open women’s championship in three sets on Saturday. “GREAT COMEBACK!! Congrats,” James wrote. Osaka wore masks throughout the tournament bearing names of Black victims of violence; James saluted her efforts by adding a raised-fist emoji to the end of his tweet.