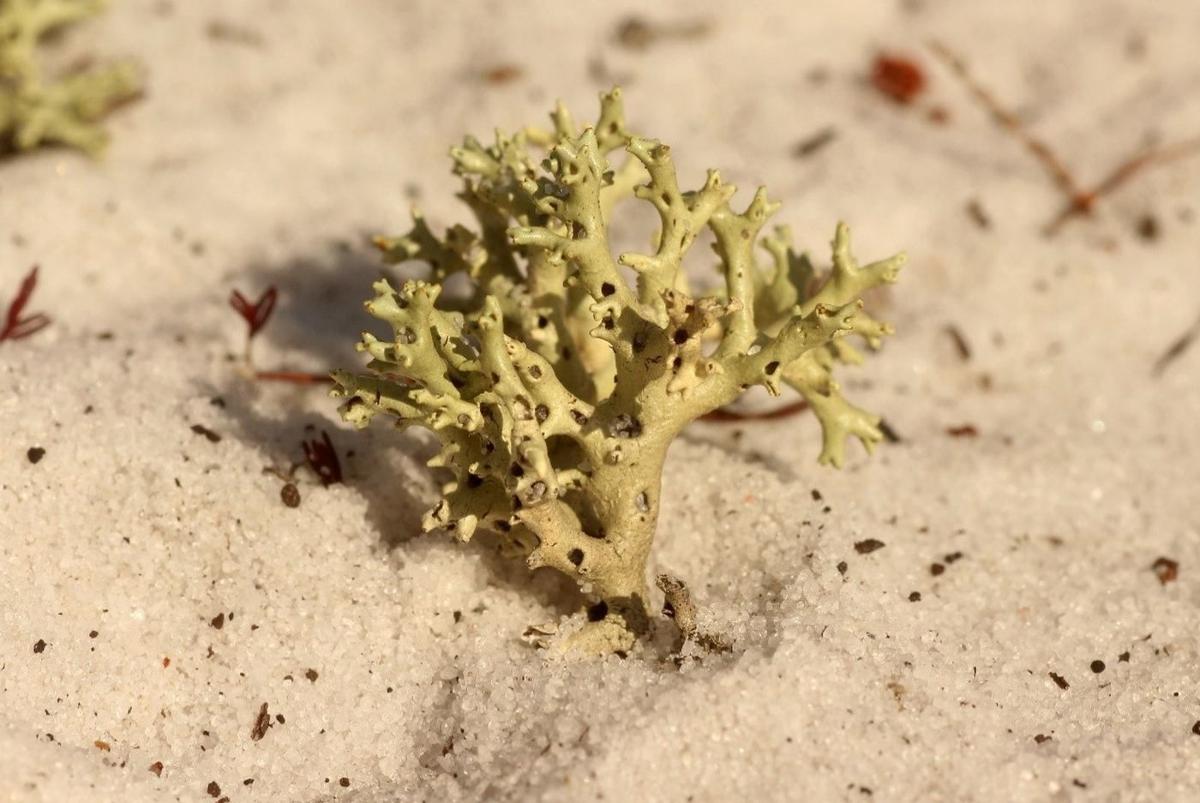 Florida Perforate Lichen Cladonia perforata growing in scrub habitat in Highlands County, Florida. What make this species of lichen unique are the perforations (holes) present along the lichen’s branches. 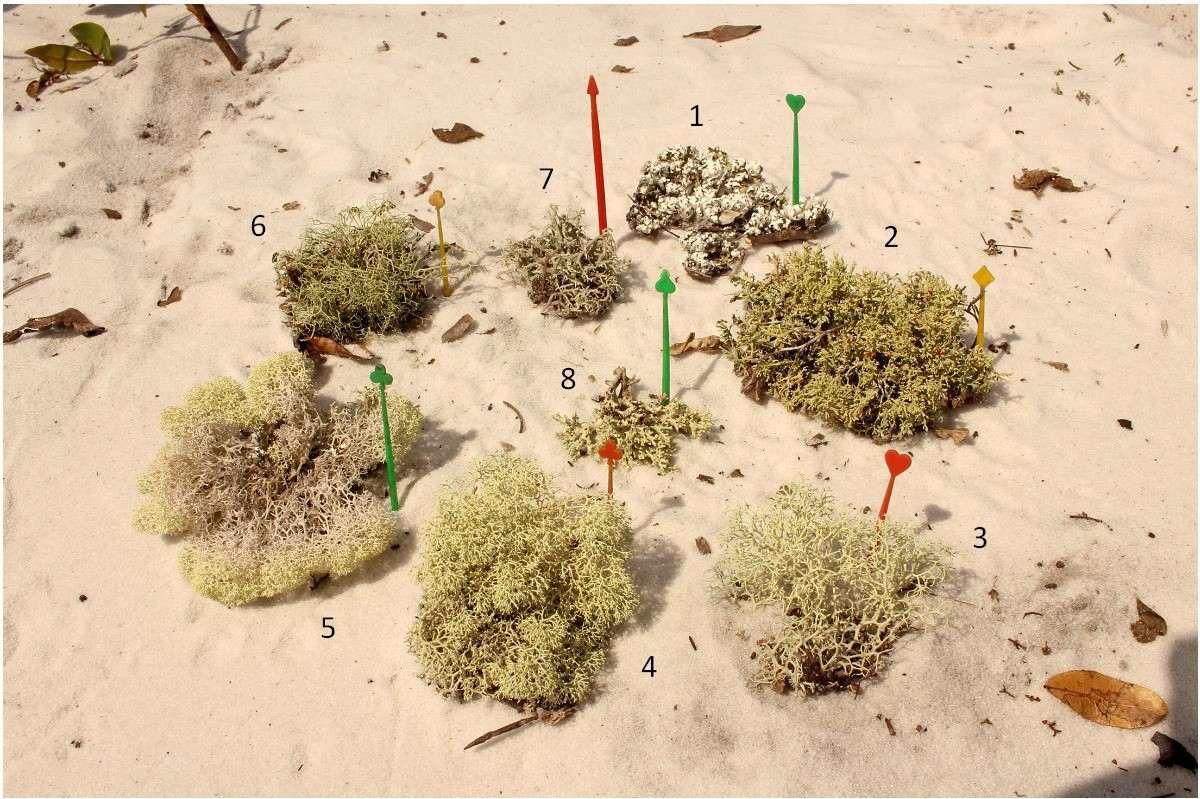 Florida Perforate Lichen Cladonia perforata growing in scrub habitat in Highlands County, Florida. What make this species of lichen unique are the perforations (holes) present along the lichen’s branches.

What do you think of when you hear about mammals, birds or plants? You probably picture in your head your pet, a backyard bird or even your favorite flower. If you’re like Seth Raynor, an intern in the Plant Ecology Program at Archbold Biological Station, more often than not you probably think of lichens instead. Raynor has been studying lichen ecology at Archbold for the past few months, discovering all sorts of species previously unknown at the Station. So what is a lichen? Raynor elaborates:

“Lichens are a type of composite organism, or one single organism consisting of more than one type of independent life form. For decades they were thought to consist of a single fungal species and a single algae species living together, each contributing to and benefiting from the other in a union biologists call symbiosis. More recently, scientists have determined that many lichens also contain complex bacterial communities and perhaps even other life forms that may or may not benefit these biological partnerships, which complicates our sense of how classic symbiotic relationships work.”

This means that the lichen most people might pass off as a mere crust growing on trees or on the ground are actually dynamic life forms that tell us much about biology, evolution, and how organisms cope with stressful environmental conditions. Lichens grow all across the planet, in a variety of habitats. In the Pacific Northwest, numerous species can be found draped along the limbs of luscious evergreen trees in temperate rainforests. In the Arctic Tundra, lichens can be seen growing in vast clumps along the ground, where caribou and other animals will browse on them for nutrition throughout the stressful winter months. And in the Florida scrub, numerous ground lichens can often be seen growing on bare sand or beneath the oaks and shrubs that dominate this landscape. And while the lichens of the Arctic must cope with a long and arduous winter with little sunlight or water, the lichens of the Florida scrub must cope with another stressful disturbance—fire.

When fires carry across the Florida scrub, many lichen species are incinerated. Unlike animals and plants, lichens do not have the option of moving around or dispersing seeds to recolonize an area. This is the story for Florida’s only federally endangered lichen, Florida Perforate Lichen (Cladonia perforata). Found in a few places with sandy scrub soils from the Florida Panhandle to Jonathan Dickinson State Park in Martin County, the Perforate Lichen also grows right here in Highlands County. Interestingly, this lichen has not been observed to reproduce sexually, unlike many other lichen species. Dr. Becky Yahr, former Research Assistant at Archbold and now the Lichen Systematist, Royal Botanic Garden Edinburgh, Scotland, noted this lichen can only recolonize an area after fire if lichen fragments are blown in by wind or other forces, such as transportation via boots. Because of its rare status, some ecologists have temporarily collected it from sites before prescribed fire and then re-released it after the fire has spread throughout the site. Seth Raynor commented, “We often think that these conservation measures are only applicable to animals, but why not lichens?”

Archbold’s Plant Ecology staff — Seth Raynor, Lily Fulton, Lexi Siegle-Bates, and Scott Ward — spent multiple days earlier this spring re-visiting sites in Highlands County where this rare lichen grows. By sampling lichen locations that have been observed by Archbold ecologists since 2009, they hope to gain an understanding of how this rare lichen responds to its environment over time.

Scott Ward explains, “It’s an exciting process taking on responsibility for these long-term projects. We can catch a glimpse into the fascinating details of changes over time. For instance, we re-visited sites still supporting Florida Perforate Lichen in early 2020 even though they had not been checked since 2017. It’s hard to imagine that in three years we can return to the exact same spot and find nearly the same amount of lichen growing there. In fact, one site had an increase in lichen abundance. This is good news for a species with a restricted range, a high sensitivity to fire, and a predilection for unique community types.”

So how could a species that is sensitive to fire and cannot reproduce sexually persist for so long? One thing that remains clear to Archbold ecologists is that patchy fires, or fires that carry only partially across a habitat, allow small pockets of the lichen to persist in unburned areas. While Gopher Tortoises and Florida Scrub-Jays have the option of escaping down a burrow, or fleeing an area during fire, and while many plants are able to re-sprout following fire, lichens remain at the mercy of chance. Perhaps now more than ever as we cope with the challenging realities of a global pandemic can we appreciate such perseverance from a tiny lichen that beat the odds.