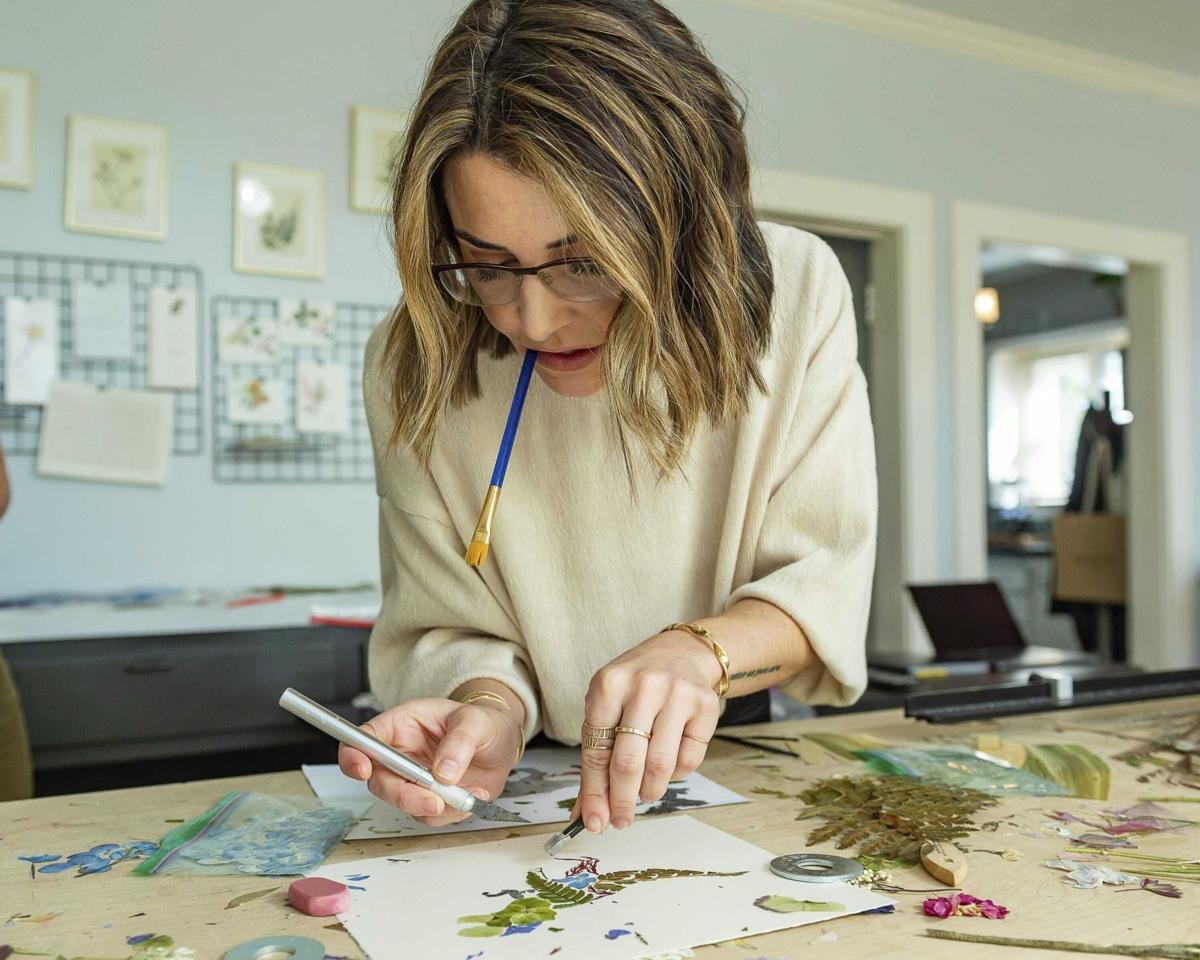 This photo taken Oct. 29, 2019, shows Anne Venable, in what started as an outlet for her to decorate her own walls has turned into Preservation Press, a local plant pressing business, offering one-of-a-kind wall and home decor. 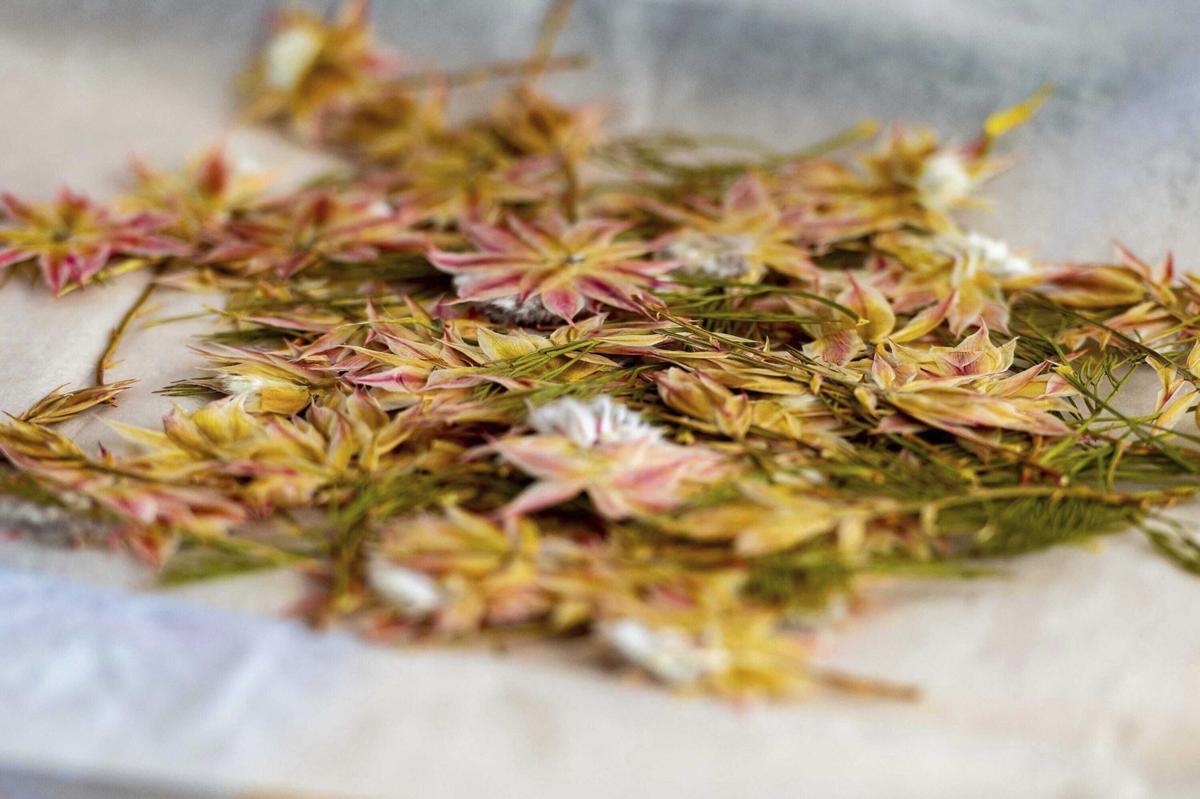 At Preservation Press, flowers are the future.

This photo taken Oct. 29, 2019, shows Anne Venable, in what started as an outlet for her to decorate her own walls has turned into Preservation Press, a local plant pressing business, offering one-of-a-kind wall and home decor.

At Preservation Press, flowers are the future.

The owner of Preservation Press started the Lafayette-based botanical pressing company as a way to decorate her home.

Although flower pressing is a common childhood hobby, Venable didn’t start until 2011. In college, she was captivated by the image of a pressed banana leaf but the art came with a hefty price tag, so her natural reaction was to try to recreate it.

For the next year and a half, she experimented using books and local flowers. Before she knew it, she had a small collection. However, when she compared her work to the original piece that inspired her, something was off. Her flowers were too small.

“So I started using bigger books,” she said.

She upgraded to her brother-in-law’s medical books but it still wasn’t enough space.

Her dad, a cabinet maker, helped make the first press, along with every other press since. A typical press is the size of a book, short and wide, able to fit garden-variety flowers. Venable had a different idea though. She wanted a press that could hold large specimens, like ferns and palm leaves, her favorite.

The press she and her dad came up with was about the size of a newspaper, no less than one foot by two feet and more than three feet tall. To this day, she hasn’t seen a press like the one she created.

“I mean honestly from there, I just wanted to get bigger and bigger pieces pressed out,” she said.

The progression of her presses is most obvious in the press room. Five presses, all larger than the next, hold a variety of flowers, leaves and memories.

The pressing process isn’t easy in Louisiana-level humidity. Despite their efforts, Louisiana weather can still have its way with the botanicals. If a flower comes out of the press with mold, the entire board has to be scrapped because mold spores are easily spread and very contagious.

To combat moisture, the paper is changed every three days and specimens are pressed for at least a month. The plants are sandwiched between layers of cardboard, newspaper, brown paper and parchment paper on each side.

“It’s all layers like an onion. You peel it back till you get to the flower,” she said. “All I’m doing is creating a large book ... you literally have pages on each side.”

With leafy green specimens, they can simply lay the plant out and rotate paper till it’s dry. But with flowers, the two women have to take off each individual petal and lay them on parchment.

“You can’t just put a rose in a book,” she said. “You have to take all the petals apart and then rebuild it.”

Some businesses are a “happy accident.” At least, for Venable it was.

Four years into hobby pressing, Venable’s former boss questioned why she was always hanging out in the woods, gathering flowers. She explained her business idea and her boss said it was “genius.”

“Her saying that was confirmation, like ‘You need to do this,’ because nobody was doing it at the time,” Venable said. “Whenever I told her that, it was just her confidence in it. I think she said ‘You’re stupid if you don’t.’”

In the beginning, Venable was juggling three jobs and endless hours of work. But the interest in her talent was easy to obtain. With the help of a little advertising, the business took off.

“I think about that often. It fell into my lap. It honestly did,” she said. “But I mean, the work behind it, and structuring a business and learning how to press flowers, I don’t have a guide. I never have.”

Her biggest learning curve was finding the best ways to press various types of flowers and plants. There is no one equation for the same flower, just years of experimenting.

Whether a florist sprayed a bouquet with water repellent or changing seasons, Venable described it as a “weird, stressful business.”

“Now that I know how to press every type of flower, I’m not stressed about it as much,” she said. “But when you have flowers that you put into a press and they’re coming out brown or mildew, you get mad at yourself.”

There are three major types of plants the business handles — funeral botanicals, wedding flowers and garden plants. The biggest difference between the three is water content.

Throughout years of experimenting, Venable can now look at a plant and know how best to proceed.

After two years of having the company all to herself, Hannah Castille joined Venable’s team. Venable jokes that Castille had more interest in Preservation Press than she did when the two first met.

“She was like, ‘When can we collaborate?’ and I was like ‘Collaborate on what?’” Venable said with a laugh.

Majority of the business revolved around weddings and funerals when she joined. But with funerals came the ability to try out mixed media art. One of Castille’s first requests for a multi-media piece was from a family in Rayne. They requested a frog made from flowers in honor of their family member.

“At the time it was interesting but I’m not Picasso with flowers,” she said. “Through all these different little custom orders, you kind of discover talent that you have within yourself ... you get faster and you get more creative with it.”

“She’s the crafter,” Venable said. “She sits in her corner and chops up flowers.”

Buying a preserved plant is not like buying a T-shirt. It won’t always be the exact replica of the image online. Plants don’t come in a standard size, shape, and color every time.

“I’ve been trying to wrap my brain around that part for like the whole eight years of doing this is how to easily sell online,” she said.

She also knows city flower picking is limited to peoples’ yards and doesn’t know if she can talk herself out of snipping someone’s roses every once in a while.

Information from: The Advertiser, http://www.theadvertiser.com