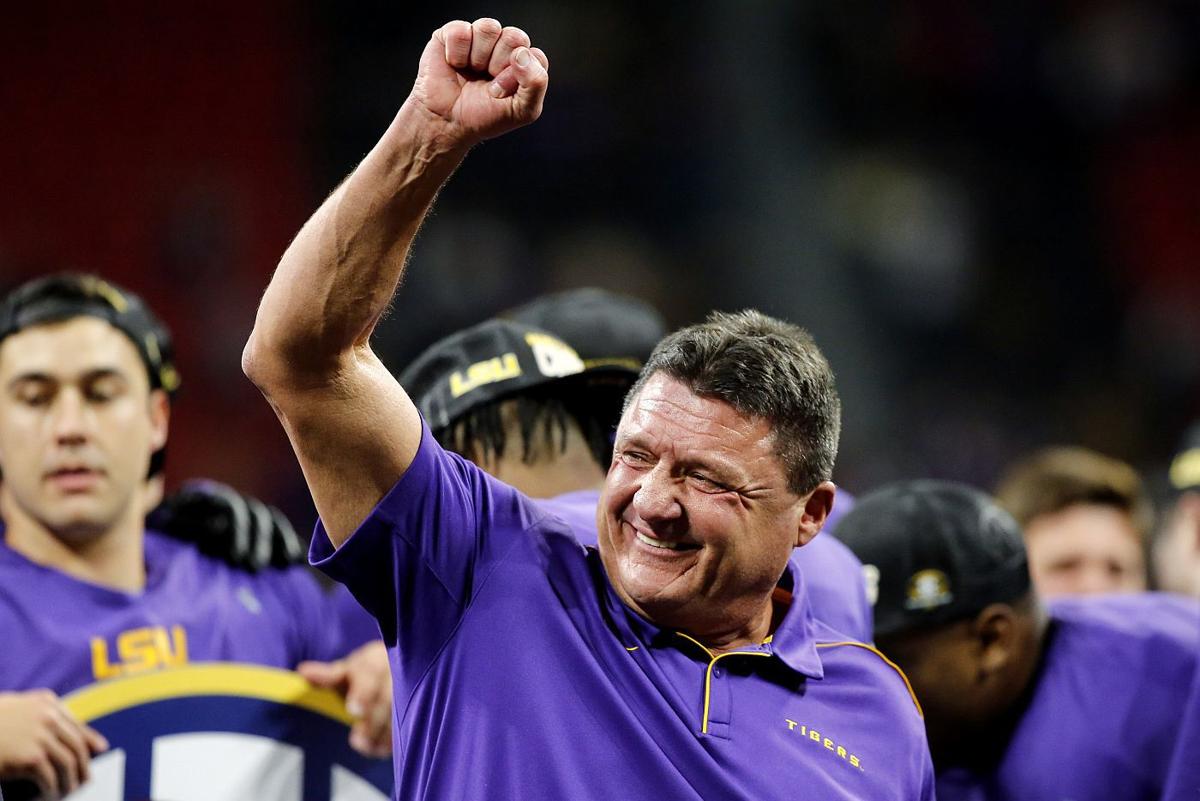 LSU coach Ed Orgeron celebrates on stage after the team’s win over Georgia in the Southeastern Conference championship, in Atlanta. 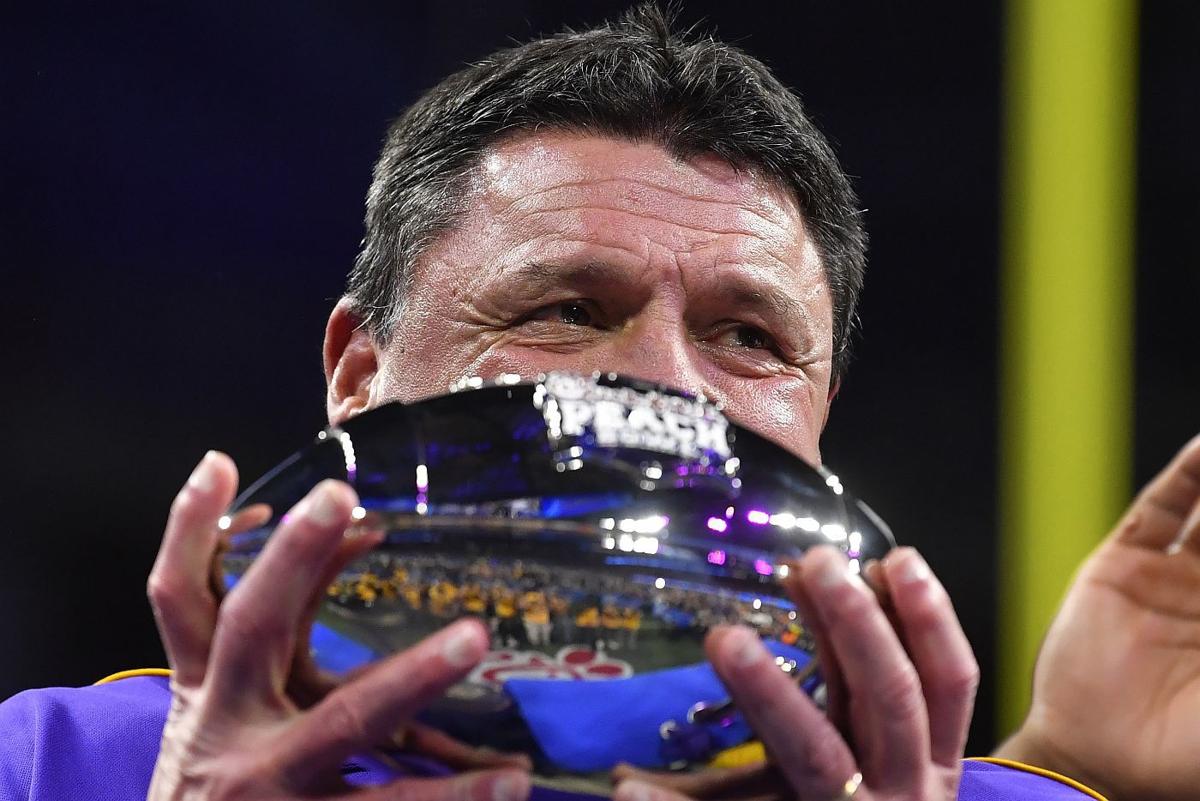 LSU coach Ed Orgeron celebrates on stage after the team’s win over Georgia in the Southeastern Conference championship, in Atlanta.

LAROSE, La. — A cardboard likeness of Ed Orgeron, wearing a purple polo with gold LSU lettering, stands in an entertainment parlor at the home of one of his childhood friends.

The life-size cutout was displayed a couple years ago at a celebration dubbed “Coach O Day” in the predominantly Cajun south Louisiana community where Orgeron grew up, a place where everyone seems to have a nickname and shares stories in the same Cajun French-influenced accent synonymous with the raspy-voiced coach.

Don “Noochie” Adams now has the keepsake in his house, which is surrounded by towering cypress trees and sprawling live oaks just down the street from Bayou Lafourche — a slow moving waterway where the distinctive outriggers of shrimp boats rise above the banks.

This is home, where Orgeron’s long, circuitous football life began.

“Bebe loves the community,” said Adams, referring to Orgeron by his childhood nickname, pronounced BAY-BAY. “He never forgot about the bayou. It oozes out of him.

“He never changed. That’s how you know it’s Bebe.”

Cajun pride is swelling in Lafourche Parish now that the former two-way lineman at South Lafourche High School, who won a 1977 state title with the Tarpons, is on the brink of capping off arguably the LSU Tigers’ greatest season in the program’s 126-year history with a national title.

No. 1 LSU plays third-ranked Clemson tonight in the College Football Playoff championship in New Orleans, about 60 miles northeast of where Orgeron grew up.

LSU has won three national championships before, but the Tigers have never gone 15-0.

Orgeron, 58, is only the third Louisiana native to coach LSU since the Tigers joined the Southeastern Conference in 1933. The coaches of LSU’s national title teams all came from out of state: Paul Dietzel (Ohio) in 1958, Nick Saban (West Virginia) in 2003 and Les Miles (Ohio) in 2007.

Not that the people of Lafourche Parish need any football history lessons.

The quarterback of Orgeron’s state title team was Bobby Hebert, who also became the first quarterback to lead the New Orleans Saints to the NFL playoffs. Although the area has a small-town feel, the high school stadium, comprised of two large concrete pavilions on each sideline, holds about 6,600 spectators. Traffic on football Friday nights can get backed up for miles on the two-lane roads along each bank of the bayou.

Like virtually everyone in his community, Orgeron was a big LSU fan growing up and accepted a scholarship to play for the Tigers, but struggled with his adjustment to college life away from home and dropped out. Later, he finishing his playing career at Northwestern State.

“I watched LSU football since I can remember,” Orgeron said after practice this week. “I knew one day I’d get a chance to represent LSU and just representing all the guys that played in the purple and gold. This is what we live for.”

Lane Fillinich, a former high school teammate of Orgeron, said the vibe in Lafourche Parish created by the LSU coach’s recent success is like “going to the Holy Land and just that feeling when you’re there that comes on you.”

“You grew up as an LSU fan, but we’ve got a horse in the race now,” Fillinich said. “We’ve got the key to the city now, the Cajuns.”

The sentiment is widespread in Orgeron’s old stomping grounds. On the front lawn of a one-story brick home a few miles up the bayou from where Adams lives is a purple and gold eye-of-the-tiger emblem resembling the one emblazoned on the 50-yard line at LSU’s Tiger Stadium.

The home belongs to Cornelia “Coco” Orgeron, Ed Orgeron’s 77-year-old mother. She said an artistically inclined neighbor painted it on her lawn and a few others in the area. Motorists often tap their horns in approval as they pass by.

“I go to the store and everybody says, ‘Our boy did good,’” Coco Orgeron said. “Let’s put it this way, he has a lot more cousins than he ever had.”

Coco Orgeron still speaks French to her older friends and laments how Cajuns felt pressure to assimilate during war times in the first half of the 20th century, and often felt unfairly looked down upon as unsophisticated people who knew little of life outside the swamps and marshes. Cajuns, she said, should be known as resourceful, hard-working people with generous hearts.

“We were ridiculed all our lives,” Coco Orgeron said while trying to explain why her community is so overjoyed by her son’s success.

Ed Orgeron wasn’t necessarily LSU’s top choice to replace Les Miles, who was fired during the 2016 season. Although Orgeron had been successful in interim stints at USC and LSU, he went 10-25 in his only other head coaching job at Mississippi from 2005-2007.

When Orgeron insisted he’d learned from past mistakes and was ready to return LSU to national prominence, no one believed him more than people he’d grown up with, like Tommy Gisclair.

But Gislair said what Orgeron has done goes beyond football, saying the coach projects a positive aura that, for example, has made Cajuns less self-conscious, if not more proud, of the distinctive way they talk.

“He’s turned it into a positive and people gravitate to him and they love it,” Gisclair said. “They love to hear him.”