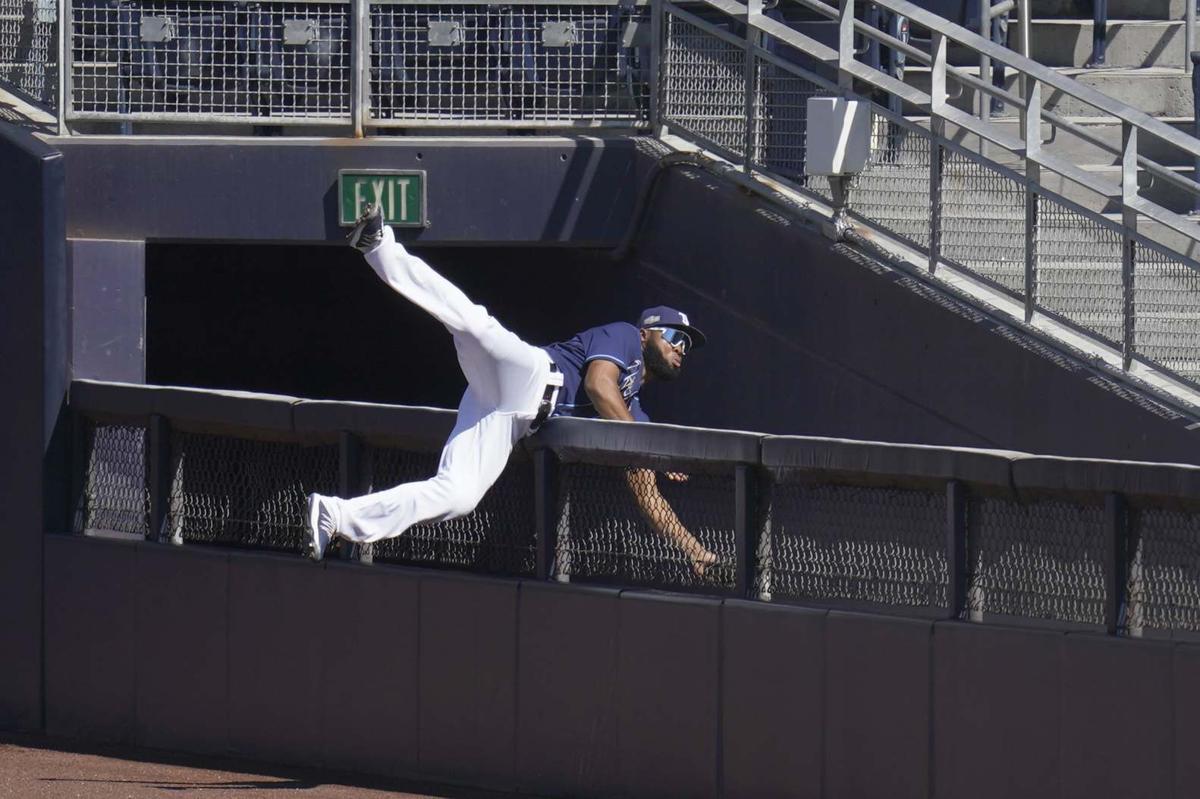 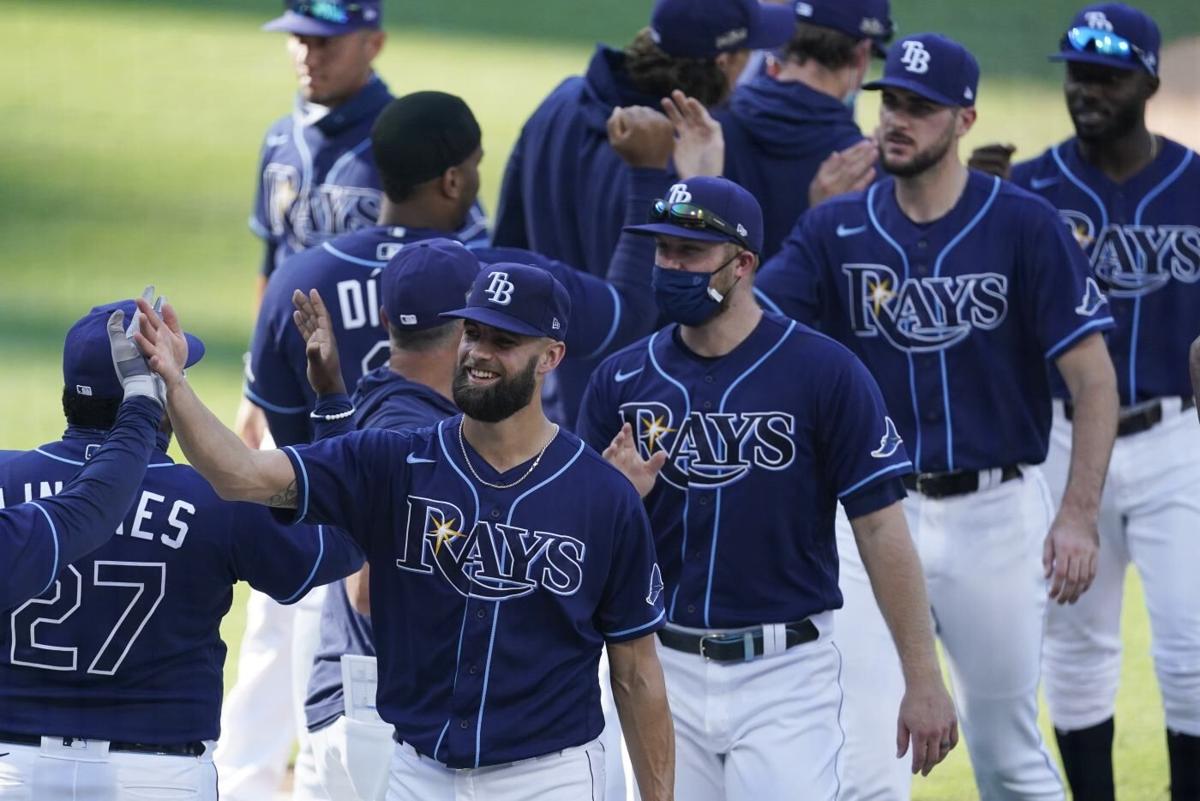 SAN DIEGO — Back in the ballpark where he started his big league career, Manuel Margot of the Tampa Bay Rays had a breakout game in the AL Championship Series with a three-run home run and a spectacular catch while tumbling over a wall in right field.

Asked which was bigger in the 4-2 victory against the Houston Astros, Margot said through a translator: “Definitely the home run. The home run didn’t hurt.”

The home run was huge, for sure, because it helped the Rays get halfway to the World Series with a 2-0 lead in the best-of-7 series.

But they’ll be talking about the catch for a long time.

With two outs in the second and runners on second and third, Margot tracked George Springer’s long foul ball to right field while shielding his face from the sun. He caught it as he tumbled over a padded railing atop a wall and landed on a walkway near the seats down the line at Petco Park.

Margot popped up, smiled and held up his glove with the ball in it after a 102-foot sprint.

Margot was shaken up a little but stayed in the game.

“Approaching it you don’t really realize how high it is but it gets a little lower once you go over the wall, so once I actually started to flip and realized it was a little bit further of a drop, that’s when I got a little scared,” Margot said.

Margot played with the San Diego Padres from late in the 2016 season until being traded to Tampa Bay in the offseason. He played one game in right field in 2016 and the rest of his time in San Diego was spent in center.

“To have the ability to know where you’re at, and kind of be able to say, ‘Forget it, I know I’m going to hit something but I’m going in,’ and still hang on to the ball, was really, really impressive,” manager Kevin Cash said.

His teammates raved about the catch.

“He sold out,” winner Charlie Morton said. “Those guys are all in for each other and they put their bodies on the line. They’ve been doing that all year. That play was unbelievable.”

Shortstop Willy Adames said Margot “was going with determination. He was going to do whatever it took to make that catch. It was an unbelievable play that he made on the right field line, putting himself in a dangerous place. I’m just happy for him, after that homer. It was amazing. I hope he continues to help the team win like that.”

Margot homered to straightaway center field on an 0-1 pitch from Lance McCullers Jr. with two outs in the first. It followed the first of two errors by second baseman José Altuve on a grounder to shallow right field by Ji-Man Choi. Altuve’s throw hit the ground before going in and out of first baseman Yuli Gurriel’s glove.

The play originally was ruled an error on Gurriel, but the official scorer later charged the error to Altuve. When Gurriel returned to the dugout, he slammed his glove onto the bench.

Margot’s big plays made a winner of 36-year-old Morton, who helped Houston win the 2017 World Series, and spoiled an otherwise fine effort by McCullers, who lost despite striking out 11 in seven innings. Three of the four runs off him were unearned.

Margot had a rough regular season. He was placed on the COVID-19 injured list in August as a precaution after he traveled to the Dominican Republic following the death of his father due to the virus.

“He’s been put through the ringer along with other family members, but we’ve turned him into our family,” Cash said. “Everybody is really, really supportive of him and just so happy for what he’s accomplished.”

Morton improved to 4-0 with a 0.90 ERA in the last two postseasons.

Tampa Bay held on through a tense ninth, when Nick Anderson twice loaded the bases. One run scored when Springer hit a one-hopper to second baseman Brandon Lowe, who stepped on the base and started a double play. After walking Altuve and Michael Brantley on four pitches each, Anderson got Alex Bregman to fly out on the first pitch to center fielder Kevin Kiermaier, a step in front of the warning track.

Game 3 is Tuesday night, when the Rays will send Ryan Yarbrough against Houston’s José Urquidy. Because this is a neutral site, the Rays, the top seed in the AL, were the home team in the first two games and Houston will bat last in Games 3 and 4, and Game 5, if necessary.

“It’s not business as usual. Tomorrow is a must-win situation for us,” said Carlos Correa, who homered for the Astros. “You don’t want to be down 0-3 in a series with a great team like the Rays.”

Said manager Dusty Baker: “It’s very frustrating, because all you hear it exit speed, and we had a ton of exit speed today.”

McCullers retired 14 straight, nine by strikeout, before Mike Zunino hit a 454-foot homer into the back bullpen beyond the fence in left-center for a 4-1 lead in the seventh. It was his third this postseason.

Houston’s Carlos Correa homered to nearly the same spot off Pete Fairbanks with one out in the sixth, his fifth of the postseason.

The Astros are in the ALCS for the fourth straight year and are trying to get to the World Series for the third time in that span. The Rays have been to one Fall Classic. They lost to Philadelphia in 2008.

Morton, who signed with Tampa Bay before the 2019 season, allowed five hits in five shutout innings. He struck out five and walked one.

McCullers allowed four hits and four runs, one earned, and walked none.

“I feel like we’ve been playing good baseball. We just haven’t got those hits. There were a lot of hard-hit balls today right at people,” Correa said. “Their defense is winning ballgames for them right now.”

Besides Margot’s spectacular catch, Adames made a nice sliding backhanded stop of a grounder by Bregman in the third and threw to first baseman Ji-Man Choi, who stretched out to catch it.

There was a moment of silence before the national anthem for Hall of Fame second baseman Joe Morgan, who died Sunday at his home in Danville at 77. A photo on the scoreboard showed Morgan in an Astros jersey. He played his first nine seasons with Houston before becoming the sparkplug of Cincinnati’s Big Red Machine. He played with Houston in 1980 toward the end of his career.