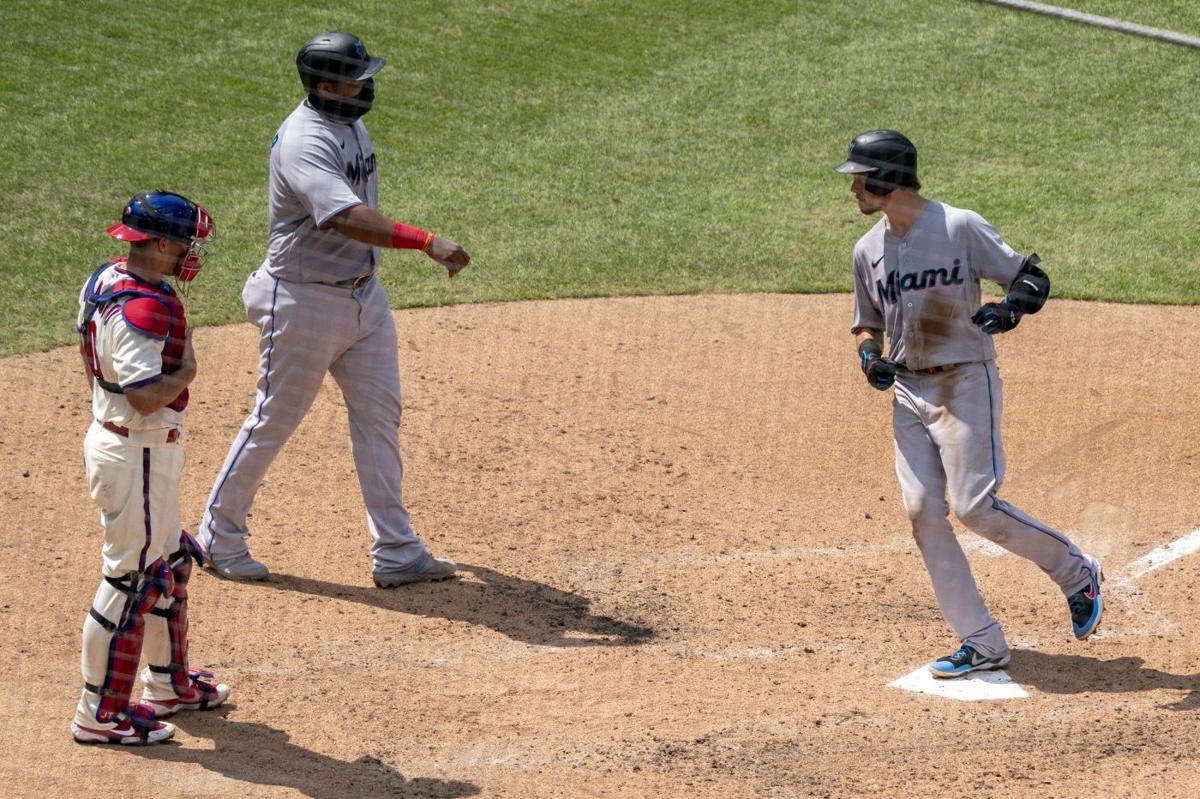 Miami Marlins’ Brian Anderson, right, comes in to score on his two-run home run with Jesus Aguilar, center, as Philadelphia Phillies catcher J.T. Realmuto, left, looks on during the fifth inning of a baseball game Sunday, July 26 in Philadelphia. 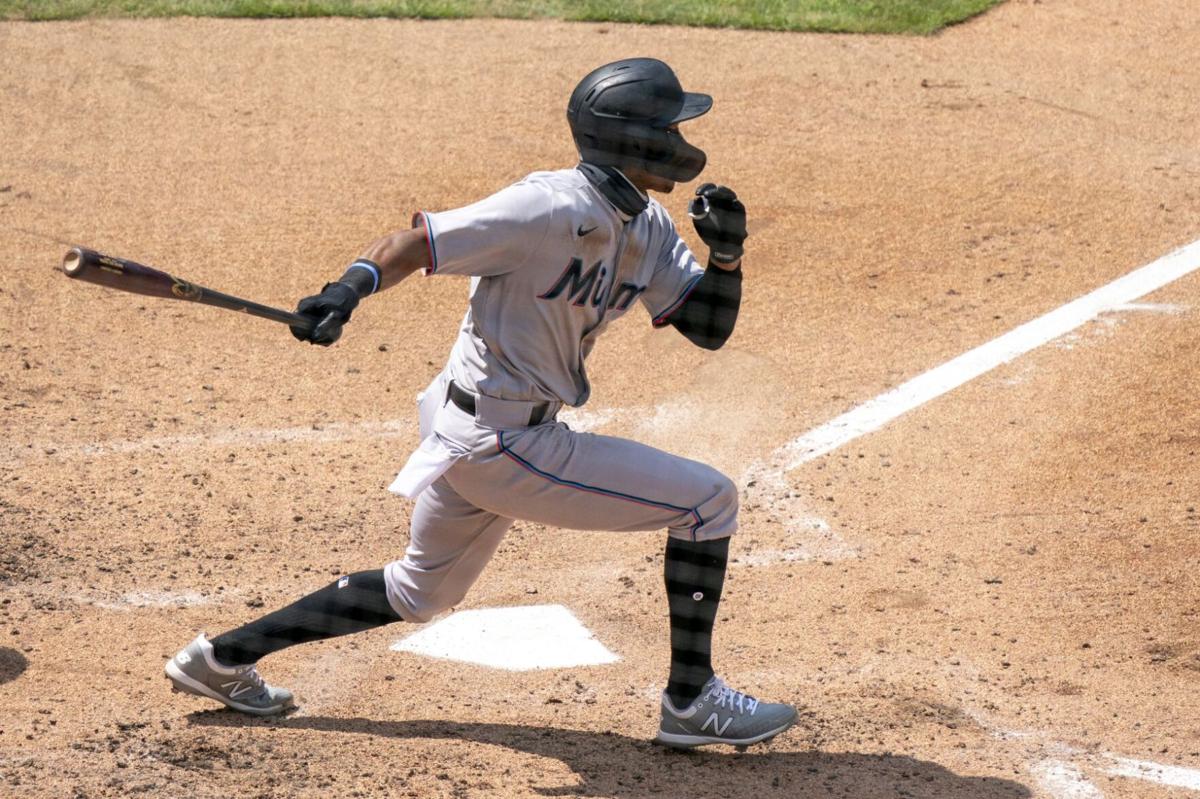 Miami Marlins’ Magneuris Sierra hits an RBI double to score Miguel Rojas during the fourth inning of a baseball game against the Philadelphia Phillies on Sunday.

Miami Marlins’ Brian Anderson, right, comes in to score on his two-run home run with Jesus Aguilar, center, as Philadelphia Phillies catcher J.T. Realmuto, left, looks on during the fifth inning of a baseball game Sunday, July 26 in Philadelphia.

Miami Marlins’ Magneuris Sierra hits an RBI double to score Miguel Rojas during the fourth inning of a baseball game against the Philadelphia Phillies on Sunday.

PHILADELPHIA — The Marlins never considered sitting out a game as health concerns rattled the clubhouse. Brian Anderson and Miguel Rojas eased the lineup pain for a day — and they’ll have an extra night in Philadelphia to think about any potential scares ahead.

Anderson and Rojas each hit three-run homers and Miami overcame the late scratch of its starting pitcher and looming coronavirus scares to beat the Philadelphia Phillies 11-6 on Sunday.

Jose Urena, Miami’s opening day starter in 2018 and 2019, was bumped from his start about 90 minutes before the first pitch. The Marlins did not disclose the reason.

Miami’s good vibes from winning two of three were dampened by the potential health scare that could keep key players out of the lineup for an undetermined length. The Marlins were scheduled to head home to start a two-game set with Baltimore on Monday, though waiting for COVID-19 test results will keep them in Philadelphia overnight.

“We were more comfortable flying as a group later,” Mattingly said.

Mattingly told Robert Dugger early in the morning he’d get the spot start. Miami had other players unavailable: Garrett Cooper and Harold Ramirez also were out of the lineup after playing in the first two games of the season-opening, three-game set against the Phillies. Again, the Marlins did not immediately say why the players were not in the lineup. Marlins catcher Jorge Alfaro was placed on the injury list with an undisclosed ailment at the start of the series.

With the specter of the coronavirus hanging over the franchise, the Marlins refused to wilt and helped turn a steamy Sunday in front of another empty ballpark into a wild one and take the series.

Yelling encouragement from the dugout all game, the Marlins rallied from 4-0 and 5-4 holes to rough up embattled Phillies starter Vince Velasquez and four relievers.

Bryce Harper’s first homer of the year, a three-run shot off a shaky Dugger in the first, helped stake the Phillies to a 4-0 lead. The ball rattled around the right field seats where Harper again took a customary bow to open the game without a fan in sight.

Harper wore a mask when he reached first base on a walk.

“They thought that would be a good idea just in case one of the other guys hadn’t tested yet,” Harper said.

Phillies manager Joe Girardi said the players were texted early in the day to know that a potential coronavirus outbreak had affected the Marlins.

“You have to be safe. You can’t really be in contact with a lot of people because you put everybody in danger,” he said.

The Phillies should consider themselves lucky not a ticket was sold — fans would have booed them out of the park.

Jesus Aguilar hit a solo shot off Velasquez in the second and Rojas followed with a three-run blast that tied it 4-all. Velasquez, who picked off two runners, lasted only three innings.

Down 5-4 in the fourth, the Marlins again rallied, sparked by Rojas’ RBI single against Cole Irvin (0-1) and Magneuris Sierra’s go-ahead single against a drawn-in infield for a 6-5 lead.

Anderson hit a three-run homer in the fifth to make it 9-5 and give the Marlins, who lost 105 games last season, a needed cushion.

The Marlins pitched out of bases-loaded jams in the fifth and sixth to preserve the lead. Jeff Brigham held the 9-5 lead in the fifth when he retired Jean Segura on a popup and Jay Bruce flied out to right.

Yimi Garcia, wearing No. 93 and in his second big league appearance, came on in relief in the sixth in a 10-6 game. He walked Harper to load the bases, then retired J.T. Realmuto and Didi Gregorius to escape the jam.

Stephen Tarpley (1-0) got two outs in the fourth for the win.

The Phillies went 2-for-13 with runners in scoring position and left 14 runners on base in a game that dragged at 3 hours, 44 minutes.

Phillies RHP Tommy Hunter is on the mend after a bout with coronavirus. He pitched his first game of the season in relief on Saturday.

“The first couple days it kind of felt like a sinus infection and then the headache came,” Hunter said. “The headache sucked. I think my wife got it a little worse than I did so I was kind of lucky. My kids, they had a fever for one day and then no symptoms after that.”

Girardi gets his first crack in the regular season against the Yankees after ending a lengthy stint in New York that included the 2009 World Series championship. The Phillies send RHP Jake Arrieta, who missed the second half of last season after pitching the first half with bone spurs in his elbow, to the mound against LHP J.A. Happ.