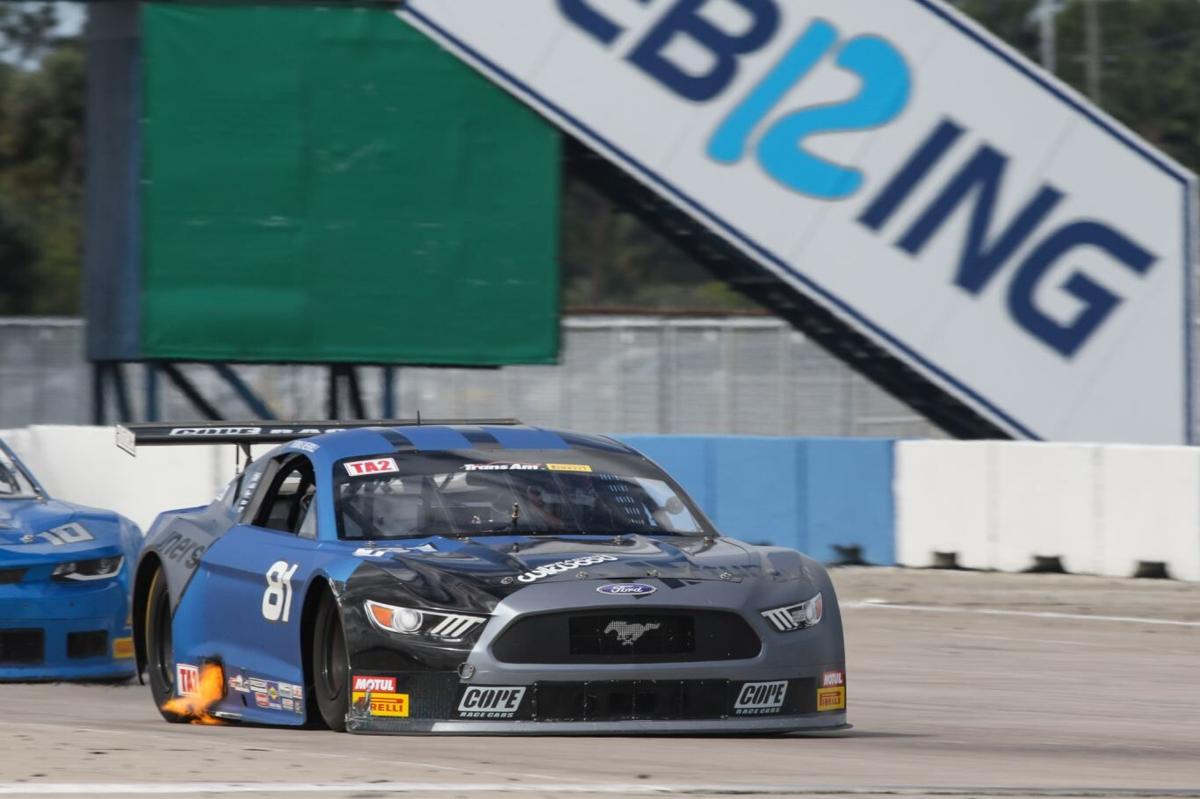 Thomas Merrill on his way to victory at Sebring International Raceway on Sunday. 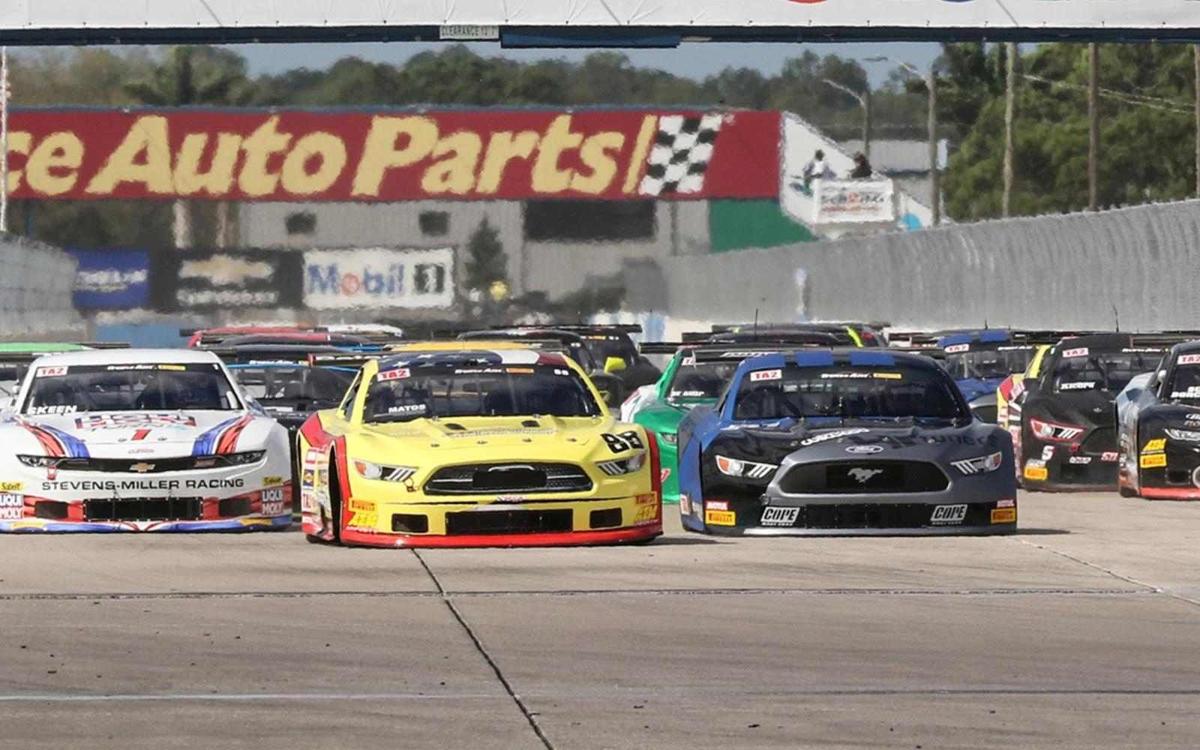 Thomas Merrill on his way to victory at Sebring International Raceway on Sunday.

SEBRING — One year after suffering a last-lap heartbreak, Thomas Merrill raced to redemption with a last-lap pass to win Sunday’s 2021 Trans Am Series presented by Pirelli TA2® season-opening race at Sebring International Raceway. The win capped a last-to-first charge by Merrill as he took the lead on the final lap in the final corner. 2019 TA2® champion Rafa Matos finished second, with 2020 TA2® champion Mike Skeen taking third. Merrill led only the final few moments to win in the No. 81 HP Tuners/Mike Cope Race Cars Ford Mustang.

Starting on the pole, Merrill went spinning off course in Turn 3 as a fierce fight for the lead saw several cars going side by side in the opening moments of the race. The off course trip saw Merrill fall to 23rd in the 25-car field. He recovered and methodically worked his way up to second, but was running out of laps when a red flag set up a green-white-checker finish.

The calculated last-lap push to the win earned Merrill the Chill Out Moment of the Race as well as a lot of satisfaction after having spun out of the lead in Turn 3 in the 2020 Sebring race.

“It was a lot of fun going side by side with some of the best racers in the country,” said Merrill of his late race battles with Matos and Skeen. “That’s what you need in a series. If you’re going to race that fast and that close with that little grip, you need someone you can trust and someone professional beside you. It was just a lot of fun today. I was pretty fired up after my early spin but this car is so easy to drive it made me look good all the way up through the field. Halfway through I stopped being angry and just started enjoying Trans Am racing!”

Matos dominated the race in his return to the No. 88 3-Dimensional Services Ford Mustang. He took the lead on the third lap and led up until the final lap, finishing 0.612-seconds behind. However, he lost power steering with 10 laps remaining, and was at a disadvantage on the last restart.

“It wasn’t our day,” Matos said. “I’m completely tired and my arms are very sore. Now, we’ll have to wait until Road Atlanta. We came here this weekend thinking about the points, we have to finish every race in order to win the championship, so it was a points weekend for us. I thought I had it covered. I had a great run, but had an unfortunate problem with the power steering which took away our chance for victory today. Congrats to Thomas. I am sure that I will be on the podium with these two guys (Thomas Merrill and Mike Skeen) throughout the season.”

Skeen began his TA2® title defense by completing the podium in his new No. 1 Liqui-Moly/Turn 14 Distribution Chevrolet Camaro, running in the top three for the entire event. He was only 0.692-seconds behind at the checkered flag.

“It’s been a tough weekend here with our new car,” said Skeen. “The Liqui-Moly Stevens Miller Racing guys were doing a lot of work to get us up to speed. We missed it a little bit in qualifying and started a little bit back, but we are happy to be here on the podium. These two guys had cars we just couldn’t touch. I tried to give them a run for their money on the restart and make it a little bit interesting. Congratulations to Thomas (Merrill) for such a great comeback, especially after last year.”

Mike Self took fourth in the No. 7 Sinclair Oil Corporation Camaro, followed by Franklin Futrelle in the No. 58 Innoviv/BH/IGOR/SecurTech Mustang and Masters winner Doug Peterson in the No. 87 3-Dimensional Mustang.

The late drama came about after Connor Mosack had an off-course excursion in Bishop’s Bend on board the No. 28 Nic Taylor/FS M1-SLR Camaro on the 24th of 27 laps, setting up the green-white-checker finish.

Misha Goikhberg got off to a great start in the No. 10 BC Race Cars Chevrolet Camaro, going from third-place starting position to take the lead as the top four drivers jostled for position. Goikhberg led two laps before Matos took the lead and began to pull away.

A full-course caution waved on the third lap when Jim Gallaugher spun in Turn 7 and could not continue in the No. 16 Madison Development Group/MCR Ford Mustang. During the caution, Scott Lagasse Jr. pitted from fourth place and parked the No. 92 SLR Chevrolet Camaro with mechanical issues. The owner/driver hopped atop his pit box and began coaching teammate Mosack, who was running seventh in the No. 28 Nic Taylor/FS M1-SLR Camaro and worked his way up to third before his incident at Bishop’s Bend.

Goikhberg’s strong day ended when he parked the No. 10 Camaro with mechanical issues after nine laps as four laps later, Edward Savadjian’s day ended when he pulled off in the No. 8 Big Machine Vodka Camaro. He had been running fifth, challenging Merrill for fourth.

Other drivers to suffer late-race misfortune included Tyler Kicera, who lost fuel pressure while running sixth in the No. 5 Silver Hare Racing Mustang on lap 17, and TA2® debutante Adrian Wlostowski, who cut a tire in the No. 3 Hawk Performance F.A.S.T. Auto Camaro while battling for a top-10 finish after 20 laps.

Next up for the TA2® competitors will be the Atlanta Speed Tour, March 26-28 at Michelin Raceway Road Atlanta.