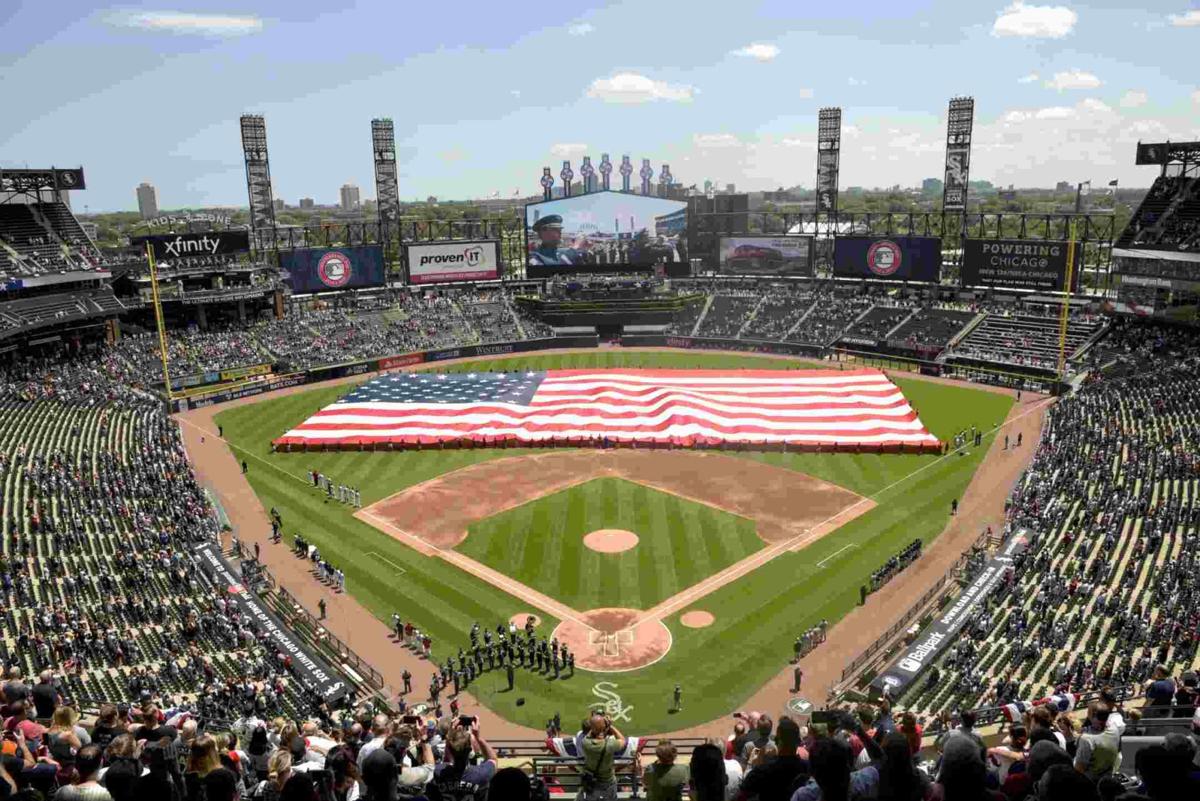 In this July 4, 2019, file photo, an American Flag is unfurled in the outfield during the playing of the National Anthem before the start a baseball game between the Chicago White Sox and the Detroit Tigers in Chicago. 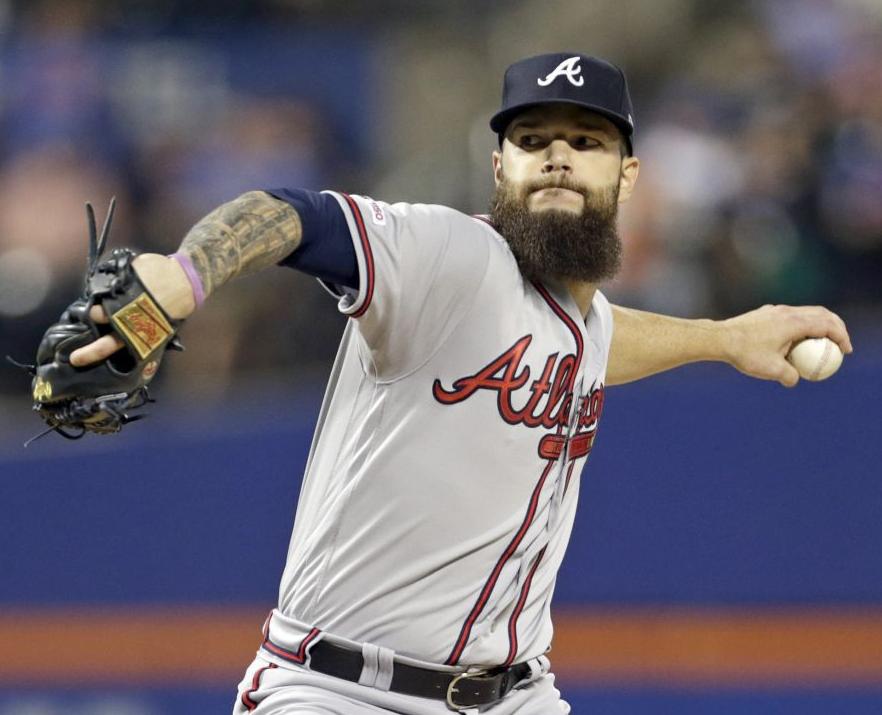 Atlanta Braves pitcher Dallas Keuchel delivers during the first inning of a baseball game against the New York Mets in New York.

In this July 4, 2019, file photo, an American Flag is unfurled in the outfield during the playing of the National Anthem before the start a baseball game between the Chicago White Sox and the Detroit Tigers in Chicago.

Atlanta Braves pitcher Dallas Keuchel delivers during the first inning of a baseball game against the New York Mets in New York.

NEW YORK — Major League Baseball owners gave the go-ahead Monday to making a proposal to the players’ union that could lead to the coronavirus-delayed season starting around the Fourth of July weekend in ballparks without fans, a plan that envisioned expanding the designated hitter to the National League for 2020.

Spring training could start in early to mid-June, a person familiar with the decision told The Associated Press. The person spoke on condition of anonymity because details of the plan were not announced.

MLB officials were slated to make a presentation to the union on Tuesday. An agreement with the players’ association is needed, and talks are expected to be difficult — especially over a proposal for a revenue split that would be unprecedented for baseball. Players withstood a 7 1/2-month strike in 1994-95 to fight off such a plan.

“If you do anything that resembles a cap, that smells like a cap, you’ve given too much,” said Dave Stewart, a four-time 20-game winner who is now an agent and spent two years as Arizona’s general manager.

“A salary cap has been a non-starter for the players as long as I’ve been in baseball,” said David Samson, president of the Expos and Marlins from 2002-17. “I think when MLB is proposing a revenue split, it is with the full knowledge that the players’ union will automatically reject that.”

Each team would play about 82 regular-season games: against opponents in its own division plus interleague matchups limited to AL East vs. NL East, AL Central vs. NL Central and AL West vs. NL West.

Postseason play would be expanded from 10 clubs to 14 by doubling wild cards in each league to four.

Teams would prefer to play at their regular-season ballparks but would switch to spring training stadiums or neutral sites if medical and government approvals can’t be obtained for games at home. Toronto might have to play home games in Dunedin, Florida.

“We’ll see where we will be in July,” said California Gov. Gavin Newsom, whose state is the home of five MLB clubs and who has talked with baseball Commissioner Rob Manfred. “We certainly look forward to Major League Baseball and all sports resuming. But again, the question is when and that will be determined on the basis of public health and public safety and the spread of this virus.”

The All-Star Game, scheduled for Dodger Stadium in Los Angeles on July 14, likely would be called off.

Medical issues will be at the forefront of talks along with economics.

“Bear with me, but it feels like we’ve zoomed past the most important aspect of any MLB restart plan: health protections for players, families, staff, stadium workers and the workforce it would require to resume a season,” Washington pitcher Sean Doolittle tweeted. “What’s the plan to ethically acquire enough tests? ... What’s the protocol if a player, staff member, or worker contracts the virus?”

Teams will propose that players receive the percentage of their 2020 salaries based on a 50-50 split of revenues MLB receives during the regular-season and postseason, which likely will be among the most contentious aspects of the proposal during negotiations with the players’ association.

“These concepts are beyond the spectrum of what players have both fought for and derived from the CBA from inception: salary caps, methodologies like this are something far afield from our working relationship with Major League Baseball,” said Scott Boras, the sport’s best-known agent. “You certainly know why they would suggest it.”

That proposal would take into account fans being able to return to ballparks at some point, perhaps with a small percentage of seats sold at first and then gradually increasing.

Baseball players have refused to consider even the frameworks for the type of revenue splits that have been agreed to by unions in the NFL, NBA and NHL.

Active rosters would be expanded from 26 to around 30. With minor leagues shuttered, there likely will be the addition of about 20 players per club akin to the NFL’s practice squad.

Teams would have the option of holding the resumption of spring training at home or at their facilities in Florida and Arizona. Most teams based in Florida appear to be leaning toward that option, while Arizona-based clubs are inclined to work out at home rather than deal with June heat in the Phoenix area.

Players and teams agreed to a deal on March 26 that called for each player to receive only a portion of salary, determined by what percentage of a 162-game schedule is played. As part of that deal, if no season is played each player would receive 2020 service time matching what the player earned in 2019.

But that deal is contingent there being no restrictions on mass gatherings at the federal, state, city and local level; no relevant travel restrictions in the U.S. and Canada; and Commissioner Rob Manfred after consulting the union and medical expects, determines there is no risk to playing in front of fans at regular-season ballparks.

Players and teams committed to “discuss in good faith the economic feasibility of playing games in the absence of spectators or at appropriate neutral sites.” Manfred has said about 40% of MLB revenue is tied to gate, including concessions, parking, ballpark advertising, luxury suites and programs.

Union officials and players have cited the March 26 agreement as setting economic terms and say they have no inclination for additional cuts. Players are more interested in medical protocols and testing designed to protect them from and detect the new coronavirus. The proposal will detail the plan for dealing with players and staff who test positive.

Because players accrue salaries for the regular season only and not for spring training or the postseason, the union may counter by asking for more regular-season games during negotiations that could significantly alter or possibly even scuttle the restart plan.

The DH was adopted by the American League for the 1973 season but has been resisted by National League owners. The players’ union has favored it because it would create more jobs for high-paying hitters in their 30s, while MLB has looked at it as an economic issue.

Money, however, has disappeared as a DH issue at this stage for 2020 because nearly all veteran players have agreed to contracts. Yasiel Puig is the most notable exception.